People have argued for years about whether high testosterone can influence performance via either a supplement or as a natural condition in women athletes. Apparently until now there have been no properly-controlled studies of this issue. Now, however, a group of seven researchers from Sweden’s Karolinksa University Hospital, the Monaco Institute of Sports Medicine, the University Cote d’Azur and the Swedish School of Sports and Health Sciences have conducted a double-blind, randomized, and placebo-using controlled study on 48 young women showing that higher testosterone improves some (but not all) measurements of performance, but does increase the authors’ main index of performance: running time to exhaustion. Higher testosterone achieved by body creams also significantly increase body mass.

You can access the study, published in British Journal of Sports Medicine, by clicking on the link below, or going to the pdf here.  The reference is at the bottom.

As the authors note, “This study is the first randomised, placebo controlled trial investigating the effect of testosterone on physical performance in young, physically active women.” They used 48 women in their study, divided into control and treatment groups. This isn’t a large sample size, but it’s hard to do this kind of work because it causes body changes in some of the subjects.

Individuals were randomized and then half of them smeared a testosterone cream on their thigh daily for ten weeks, and the other half a placebo cream (side effects of the testosterone cream included acne and increased hair growth). Then the authors administered both groups several athletic tests as well as measuring circulating testosterone levels and body mass.

The summary at the paper’s outset pretty much tells the tale: 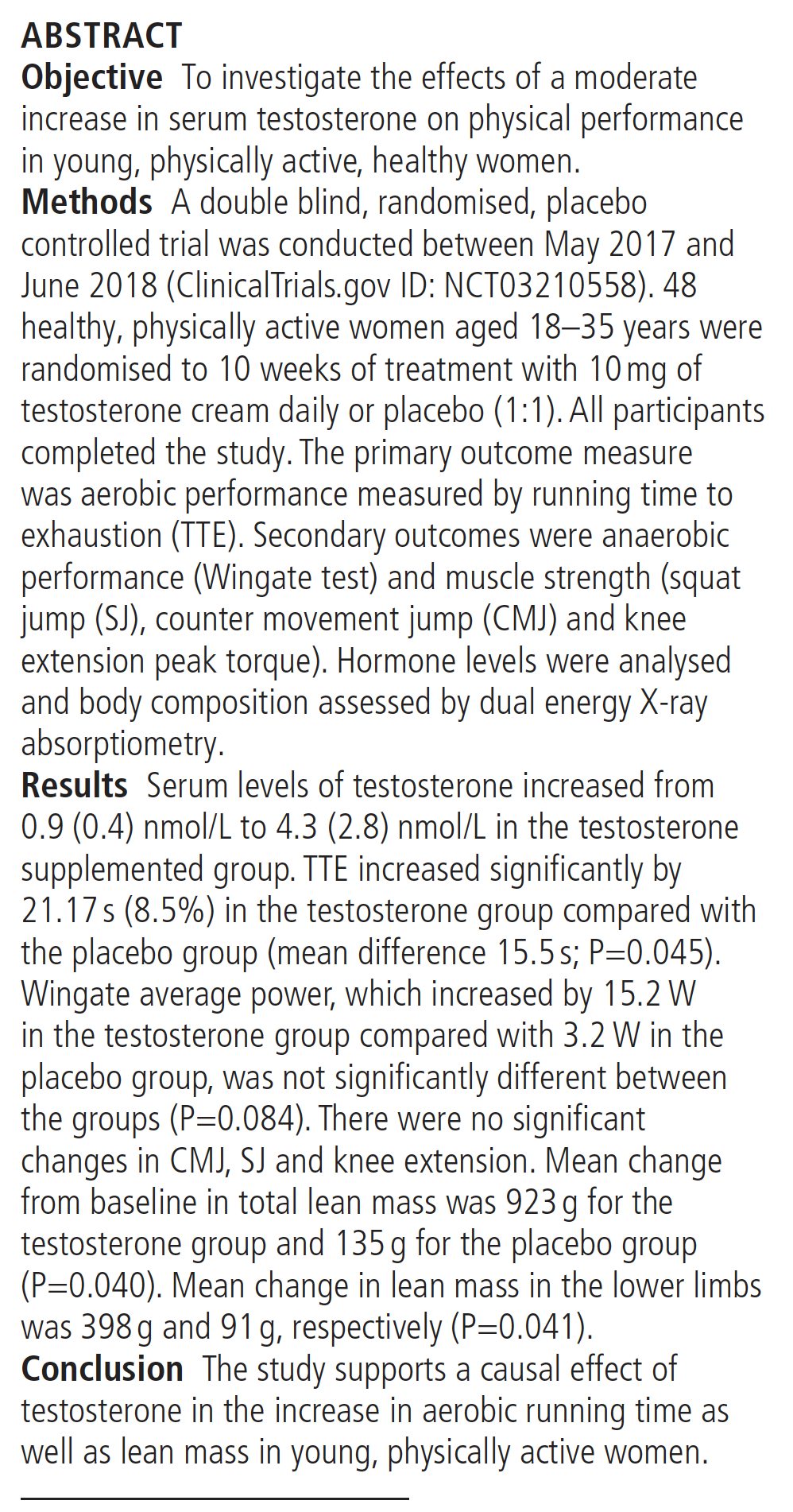 Apparently the authors’ main test of athletic performance was “time to exhaustion” when running on a treadmill, and that increased on average by about 16 seconds, a highly significant difference (over 8%) above the placebo group (p > 0.001). The Wingate test, a 30-second test of anaerobic power on a cycle, also showed slightly higher performance in the testosterone-treated group (p. < 0.05), but there was no difference between the groups in force generated during jump tests (a surrogate for jump height) or in knee extensor torque.

Note that the level of serum testosterone levels in the treatment group (4.3 nmol/liter) was still below the Olympic committee’s upper limit (5 nmol/liter), but much higher than the 0.9 nm/liter in the control group. This means that significant athletic ability was gained without exceeding the threshhold that would bar one from competing in female Olympic events. According to the authors, the levels of testosterone are radically different—in fact, nonoverlapping—in ‘normal’ males vs. ‘normal’ females:

“As determined by tandem mass spectrometry, the normal female range of circulating testosterone is 0.1–1.8 nmol/L and does not overlap with the normal male range (7.7–29.4 nmol/L). The dose we used resulted in an increase in mean serum testosterone of 4.3 nmol/L, which is clearly below the male range, and yet increased some indices of aerobic and anaerobic performances.”

But they add that some rare developmental conditions in women that affect sex development also cause increased testosterone levels as well as inducing increased lean body mass and higher physical performance. I found these data interesting:

The prevalence of 46XY, DSD [difference in sex development, with women having a Y chromosome] among elite female athletes is estimated to be about 140 times greater than in the general population. There is controversy internationally on whether it is fair to allow these hyperandrogenic individuals with high testosterone levels to compete against women with normal female androgen levels.Indeed, some scientists and human rights advocates consider that an individual who has been assigned female gender at birth, raised as a girl and who is socially accepted as a woman, should be allowed to compete in the women’s category, irrespective of her levels of testosterone and androgen receptor sensitivity.

Overall, the authors conclude this:

Our study supports a causal effect of testosterone on physical performance, as measured by running time to exhaustion, in young healthy women. Thus the ergogenic effect of short term moderately increased testosterone concentration seemed to apply for aerobic performance only. Testosterone also promoted a leaner body composition with an increase in muscle mass although body weight was unchanged.

There are, then, implications from this study about how to regulate participation in elite sports, though it’s above my pay grade to suggest rules, because (as I’ve said before), this is a difficult biological and ethical issue.

Even the Guardian, woke as it is, reports the results of this study pretty much straight (click on screenshot below), quoting several people who say that testosterone supplements clearly increase athletic performance (by 8%, a “huge effect in sports”), and that testosterone level is “the best indicator of sex difference.”

The Guardian also reports that the International Association of Athletic Federations has announced it will “impose an upper limit for testosterone levels on trans female athletes competing in middle-distance events.”  This may force Caster Semenya, a gold-medalist Olympic runner, to take testosterone reducing medication to compete in events between 400 m and a mile, and must keep her testosterone levels continually below 5 nmol/liter. (Semenya has challenged the past rules about that limit.) 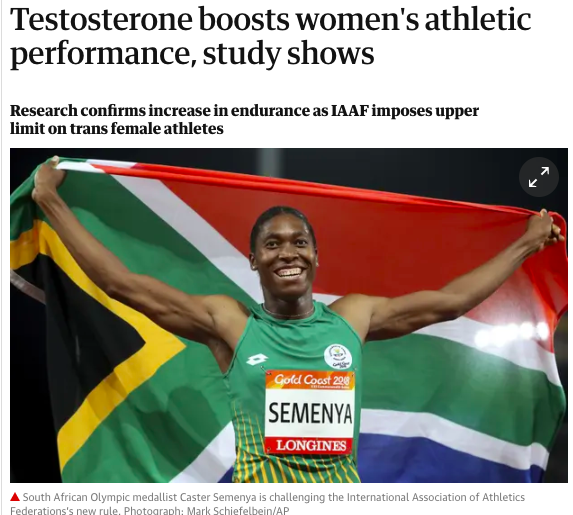 This new study is also relevant to an editorial published in the British Medical Journal last March, before the new data came out (click on screenshot below), saying that new rules were premature because there weren’t any good scientific studies of the effects of serum testosterone levels on athletic performance, and that the IAAF’s already-existing regulations (an upper limit of of 5nmol/liter) risked “setting an unscientific precedent for other cases of genetic advantage”. The editorial ends like this:

History compels us to ensure that decisions about genetic superiority are supported by objective, rigorous, and reproducible data. Although this is purely conjecture, we venture that the Olympian gods smile down on winners like Mokgadi Caster Semenya when they perform extraordinary feats of human endeavour.

That last pronouncement, in the absence of data last March, seems premature—almost a bit virtue flaunting—as it uses “the Olympian gods” as a surrogate for “we editors.”

At any rate, this new study, while based on a small sample (24 women in each group), clearly mandates further work, but also puts the lie to the claim that testosterone has no relationship to athletic ability. The data now show that it seems to.  Whatever rules will follow findings like this (and, as I said, I’m not in a position to make them), I still maintain that “self identification” as a women, as is the rule in Connecticut, the UK, and soon in California, is not sufficient to allow a biological male to compete in women’s athletic events. There must be some kind of standard based on biology rather than psychology or mere assertion.