Two days ago I wrote a critique of a curiously disjointed and poorly written article by science historian Nathaniel Comfort: a critique of science and “scientism” published in Nature. It was a garbled mixture of postmodern and woke sentiments, making a bogus claim that discoveries like the microbiome and epigenetics have radically altered our “sense of self”, with an ancillary claim that “other ways of knowing” can help us define “the self”.  Here’s Comfort’s garbled last paragraph:

Since the Enlightenment, we have tended to define human identity and worth in terms of the values of science itself, as if it alone could tell us who we are. That is an odd and blinkered notion. In the face of colonialism, slavery, opioid epidemics, environmental degradation and climate change, the idea that Western science and technology are the only reliable sources of self-knowledge is no longer tenable. This isn’t to lay all human misery at science’s feet — far from it. The problem is scientism. Defining the self only in biological terms tends to obscure other forms of identity, such as one’s labour or social role. Maybe the answer to Huxley’s ‘question of questions’ isn’t a number, after all.

I won’t repeat my criticisms of Comfort’s piece; plenty of readers also found it bizarre. I’ll say only that nobody, including we biologists, defines the self only in biological terms, but in fact the use of biology to help us understand the notion of self is both uncontroversial and a non-problem.  Steve Pinker kindly emitted two tweets criticizing Comfort’s piece and calling attention to my critique. To wit:

Jerry Coyne @evolutionistrue dismembers the latest essay in the genre that inspired me to write Enlightenment Now: The deeply muddled diatribe against "scientism" (and usually, Enlightenment values). https://t.co/1DYq8kuG4R via @Evolutionistrue

Unlike past anti-scientism rants in lit/cult/pol mags, this is in Nature. Why? Sci eds often outsource commentary on sci & soc to the clique of historians of sci, who historicize everything & hate sci's claim to objectivity & realism. https://t.co/1DYq8kuG4R @Evolutionistrue

Now, on his website Gentopia, whose motto is, oddly, “here lies truth” (Comfort is not a scientist but a historian of science), Comfort answers not me, but Pinker’s tweets, or, rather the second tweet. Click on the screenshot to read another rant. And note that he misspells Pinker’s first name—twice. In the title, too! But Pinker’s name is spelled correctly in his tweets, the ones Comfort attacks. 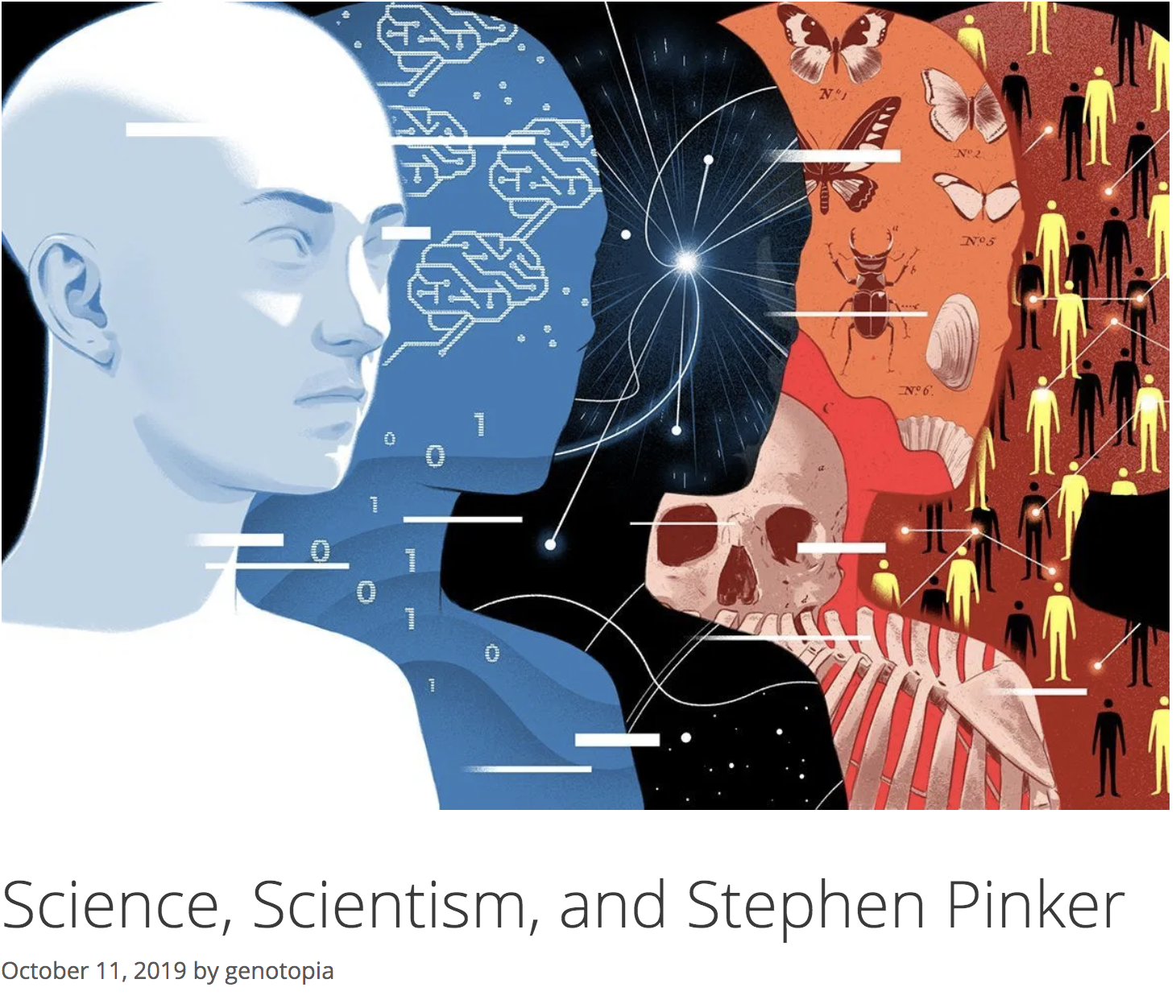 Apparently I am too small a fish to merit a response from Comfort, which is fine. I’ve never pretended to be as smart or influential as “Stephen”. Rather, Comfort is eager to go after Pinker’s second tweet, and can’t resist a few ad hominems, showing what a nasty piece of work Comfort is (neither Steve nor I addressed Comfort’s appearance, which of course is irrelevant). I’ll give just a few of Comfort’s responses:

I’m now used to the ritual of Jerry Coyne (@whyevolutionistrue) attempting a takedown of my stuff. To my perverse delight, though, the Harvard psychologist and hair model Stephen Pinker took a poke at me. Couldn’t resist that. What follows is the tweet stream I sent out in response, clarifying some points in the article and differentiating further between science and scientism.

Anyway, you can look at Comfort’s “tweetstream” yourself (he goes by the name of Pomo Shaman!), none of which dispels the notion that he’s pushing a postmodernist critique of science, indicting the field because it’s been misused by people to do bad stuff (like the humanities, architecture, and nuclear physics). But the end of his piece shows both his anger and his “novel” claim that science has been misused, which of course is not novel at all, and certainly not worth a diatribe in Nature. (Or was his disatribe about how new discoveries have altered our sense of self?). I’ve bolded the telling parts, but Comfort’s anger peeks through in the interstices:

The question isn’t *whether* science and society interact, it’s *how.* We can have disagreements on the how—I show you my evidence, you show me yours, we hash it out—but not the whether.
I’m not arguing with a flat-Earther.

Historians don’t “hate realism,” for chrissakes. We’re more realistic than scientists like Pinker who live in an ideal world of pure reason, failing to acknowledge the messiness of the real world. [JAC: LOL!]

Thinking you have uniquely privileged access to reality is scientism, not science. It is to live in a sterile, blinkered world, populated only by the stately march of the anointed intellects toward the one & only Truth. That’s like the worst kind of superstitious evangelism.

It’s also chauvinistic, narrow, parochial, and bullying. It’s tyrannical, ham-handed, intolerant of dissent. How unscientific! And if Pinker knew his history, he’d know how science can be—has been—marshaled in the name of tyrannies large and small, across continents, down the centuries.

Umm. . . Pinker does know his history, and has made the point about science’s misuse several times in his writings. Comfort goes on:

Science can be great! It makes many, many positive contributions to knowledge & to society. It need not be put in the service of oppression, nor is it always. But it’s indisputable that it has been, many times. You can start with Karl Brandt and work your way down.

The thesis of my @nature piece, then, once again, is that insidious applications of science are due not to the science itself, but to the ideology that sometimes accompanies it: Scientism. Capeesh?

He also says this:

If that was your point, Dr. Comfort, why didn’t you make it explicit? What you said is this:

I want to suggest that many of the worst chapters of this history result from scientism: the ideology that science is the only valid way to understand the world and solve social problems. Where science has often expanded and liberated our sense of self, scientism has constrained it.

That’s not saying that ideology coupled to science can do bad stuff; it’s saying that the ideology that “science is the only valid way to understand the world and social problems” is what’s problematic.  In fact, one can make a case that if you mean “a general understanding of reality that is agreed on by all rational people”, science (construed broadly) is the only way to understand the world. The values that we bring to diagnosing the world’s ills don’t come from science, but, as I said in my critique, implementing those values to effect a desired solution is also an empirical problem. Capeesh?

Comfort emits a final dose of bile, not omitting his woke and postmodernist equation of Pinker’s views with the “male gaze.”

One last thing: @sapinker’s arrogant and bullying scientism is both a symptom and a cause of the WEIRD male gaze that’s dominated science for centuries is Exhibit A in the case for why we need more diversity in science. Hence the last point in my essay.

Male scientists who aren’t arrogant, scientistic pricks (and I know many): There’s no need to say, “Not all scientists.” If this doesn’t describe you, it’s not about you, and I doff my hat to you, sir.

In fact, Pinker’s tweet is not anything close to a demonstration of why we need more diversity in science. I’ll show it again:

Unlike past anti-scientism rants in lit/cult/pol mags, this is in Nature. Why? Sci eds often outsource commentary on sci & soc to the clique of historians of sci, who historicize everything & hate sci's claim to objectivity & realism. https://t.co/1DYq8kuG4R @Evolutionistrue

Does “Stephen” Pinker’s claim here come from racism, the privilege of old white males, or sexism? I can’t imagine how. It is an empirical claim that has nothing to do with gender or ethnicity. Comfort’s use of the postmodern “male gaze”, his call for diversity, and his implication that Pinker is an arrogant scientistic prick (seriously, dude, look at that last word!), is a form of virtue-flaunting.

After reading this, I now think that Comfort is not only a muddled, woke postmodernist, but also a nasty one. Hair model, indeed!