Existing law prohibits the governing authority of a school or other institution from admitting for attendance any pupil who fails to obtain required immunizations within the time limits prescribed by the State Department of Public Health. Existing law exempts from those requirements a pupil whose parents have filed with the governing authority a written statement by a licensed physician to the effect that immunization is not considered safe for that child, indicating the specific nature and probable duration of their medical condition or circumstances, including, but not limited to, family medical history.

This bill would instead require the State Department of Public Health, by January 1, 2021, to develop and make available for use by licensed physicians and surgeons an electronic, standardized, statewide medical exemption request that would be transmitted using the California Immunization Registry (CAIR), and which, commencing January 1, 2021, would be the only documentation of a medical exemption that a governing authority may accept. The bill would specify the information to be included in the medical exemption form, including a certification under penalty of perjury that the statements and information contained in the form are true, accurate, and complete. The bill would, commencing January 1, 2021, require a physician and surgeon to inform a parent or guardian of the bill’s requirements and to examine the child and submit a completed medical exemption request form to the department, as specified. By expanding the crime of perjury, the bill would impose a state-mandated local program.

Note that the major thrust of this bill is to standardize via an electronic form requests for exemptions that were already allowed. There are no new criteria added for getting such an exemption. There’s also a right of appeal (adjudicated by a panel of physicians and surgeons), and, instead of a one-time filing, the certificate must be re-filed annually. It’s electronic, so it’s not onerous.

You can read the whole bill at the link above, but it seems remarkably tame to me. That is, of course, unless you’re an anti-vaxer or someone who opposes vaccination on religious or philosophical grounds.  And exemptions based on religion or philosophy are allowed in 45 of the fifty states. The ProCon.org site gives a map and says this:

No US federal vaccination laws exist, but all 50 states have laws requiring children attending public school to be vaccinated against diphtheria, tetanus, and pertussis (generally in a DTaP vaccine); polio (an IPV vaccine); measles and rubella (generally in an MMR vaccine); and varicella (chickenpox). All 50 states allow medical exemptions, 45 states allow religious exemptions, and 15 states allow philosophical (or personal belief) exemptions. DC allows medical and religious exemptions. While reasonable effort has been made to ensure the accuracy of the information provided, do not rely on this information without first checking with your local school or government. This chart was last updated on June 14, 2019. 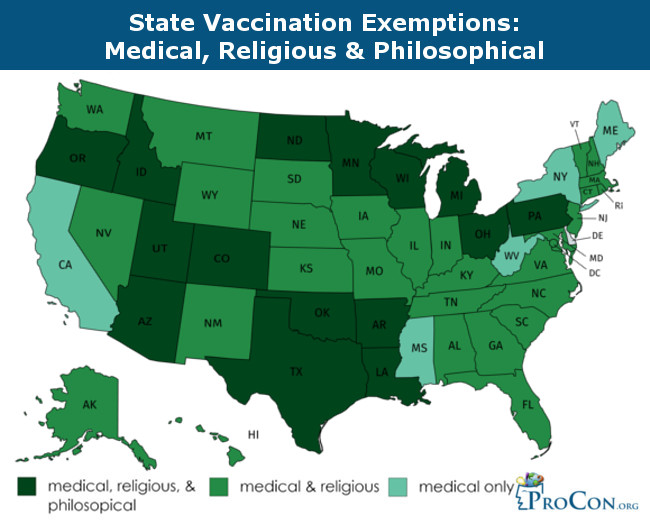 Now I’m not sure what a philosophical exemption could consist of, but 15 states allow that. To my mind, the welfare of the child, and of other children who could contract diseases from an unvaccinated child, trumps religion and philosophy. (Of course children who have good medical reasons not to be vaccinated should be exempt.) Only California, Mississippi, West Virginia, New York, and Maine have sane policies on this; the rest bow to either religion or philosophy.

The Washington Post details the objections of Californians to this bill in a story from two days ago (click on screenshot):

The protests include these:

First, protesters blocked the entrance to the state capitol Monday and repeatedly shut down the legislature with their demonstrations as Gov. Gavin Newsom (D) signed the bill, the San Francisco Chronicle reported.

Then, a candlelight vigil Wednesday for children allegedly harmed or killed by vaccines included a photo of Ethan Lindenberger, who chose to be vaccinated against his parents’ wishes and has testified before Congress. Jonathan Lockwood, executive director of the anti-vaccine group Conscience Coalition, which organized the vigil, did not immediately respond to a question about why the photo was used.

The state legislative session closed Friday with a dramatic display from the gallery: A woman threw “a feminine hygiene device containing what appeared to be blood” at the senators from a balcony, the California Highway Patrol said.

The protestors and the liquid-throwing woman (I couldn’t ascertain if it really was blood) were arrested. The Post reports that there is a new “wave of hesitancy” about getting children vaccinated, a trend also highlighted by the World Health Organization as one of the ten global threats to health in 2019. WHO notes that “The reasons why people choose not to vaccinate are complex; a vaccines advisory group to WHO identified complacency, inconvenience in accessing vaccines, and lack of confidence are key reasons underlying hesitancy.”

But vaccinations should be required for all children, religious or not. Should a two-year-old really go unvaccinated when its parents have philosophical or religious qualms? That’s a form of child endangerment, and the child has no say.  And even for older children (I’m not sure up to what age mandatory vaccinations are given), there’s still the chance of epidemics starting with the unvaccinated. That’s not just a theoretical risk, either; as the Post adds:

The United States is experiencing the greatest number of measles cases in a single year in 27 years. Fueling the outbreaks are anti-vaccine groups that have spread misinformation that lowered vaccination rates in vulnerable communities. New York City’s ultra-Orthodox Jewish community was hard hit by misinformation about the safety and effectiveness of the measles, mumps and rubella vaccine, officials have said.