Of all existing religions that claim to be religions, Unitarian Universalism (UU) seems to be the least dogmatic and therefore the least harmful—and perhaps the most liberal and tolerant. It adheres to no scripture, and although many members believe in God, others are atheists or agnostics. I’ve even been to a UU service, where to my surprise I saw a cross on the wall. (That must have been a more conservative branch!)

At any rate, it came as a surprise to learn that some UUers, many of whom are good people doing good things, are nevertheless infested with Wokeness.  This apparently includes the 500 white UU ministers who signed an open letter after  UU minister Todd Eklof (white as well) circulated an invidious book at a national UU meeting in Spokane. (According to reader Jeremy, who sent me the link, the book was a critique of “political correctness”.) The book was Eklof’s own product: “The Gadfly Papers: Three Inconvenient Essays by One Pesky Minister.” Its Amazon summary says this:

The Gadfly Papers is a collection of three essays written by Rev. Dr. Todd F. Eklof about the negative impacts the emerging culture of Political Correctness, Safetyism, and Identitarianism is having on America’s most liberal religion. It’s written specifically for Unitarian Universalists who care about the future of their faith, but will prove of interest to anyone seeking to understand how today’s identity politics can fundamentally alter any institution, and presents a seminal case-study for researchers of this timely subject.

Well, that won’t fly in a UU meeting, and, indeed, Eklof was expelled from the meeting, despite the fact that he had spent a lot of his career fighting for gay marriage.  According to the Spokane (Washington) Spokesman-Review, Eklof offended some people because of his book’s “themes”:

“Rev. Eklof began distributing his book on Saturday. The book, which contained factual errors and called for the dissolution of our Association, raised many concerns,” wrote Carey McDonald, executive vice president of the [Unitarian Universalist] [A]ssociation, in the statement. “When many leaders, including those named in the book as well as people of color and trans and nonbinary leaders, expressed concern about themes in Rev. Eklof’s book, event organizers tried to engage him about how his book impacted others at the event.”

Eklof, who lost his job in Kentucky for arguing against a statewide initiative banning gay marriage, said he was inspired to write his essays after reading a piece criticizing what have been termed “safe spaces” on college campuses, where certain topics are avoided to preserve students’ emotional well-being. The same suppression of ideas is occurring within the Unitarian Universalist church, Eklof argues, and in a second essay made the case that the situation might require a separation of congregations that have been united since the early 1960s. The combined faiths’ early years saw adherents supporting the Civil Rights movement in America.

The book, which Eklof said he passed out at a booth at the national General Assembly of Unitarian Universalists at the Spokane Convention Center starting Friday afternoon, drew a strong rebuke from within the church at the assembly and online. The Diverse Revolutionary Unitarian Universalist Multicultural Ministries, a collection of people of color within the church, issued a statement Saturday condemning the book, which it said “reintroduces toxic histories and theologies containing transphobia, ableism, sexism and targets people of color, and in particular religious educators.”

Well, I don’t know what was in Eklof’s book; my own guess (which is just a guess) is that it was pretty innocuous, and the reaction of his colleagues would be similar to the reactions of students at campuses like Oberlin, Evergreen State, or Williams: gross offense, banning, and even self-recrimination. At any rate, you can read the objections of the 500 white ministers by clicking on the screenshot below  (a shorter version is at the last link above), with the introduction as follows:

The following open letter was published and signed by nearly 500 white Unitarian Universalist ministers after the Rev. Todd Eklof, minister of the Spokane UU Church, distributed a self-published treatise that included vitriolic rhetoric about several marginalized groups within Unitarian Universalism. Several hundred copies of the treatise were distributed by Rev. Eklof and members of the Spokane congregation during General Assembly in Spokane. 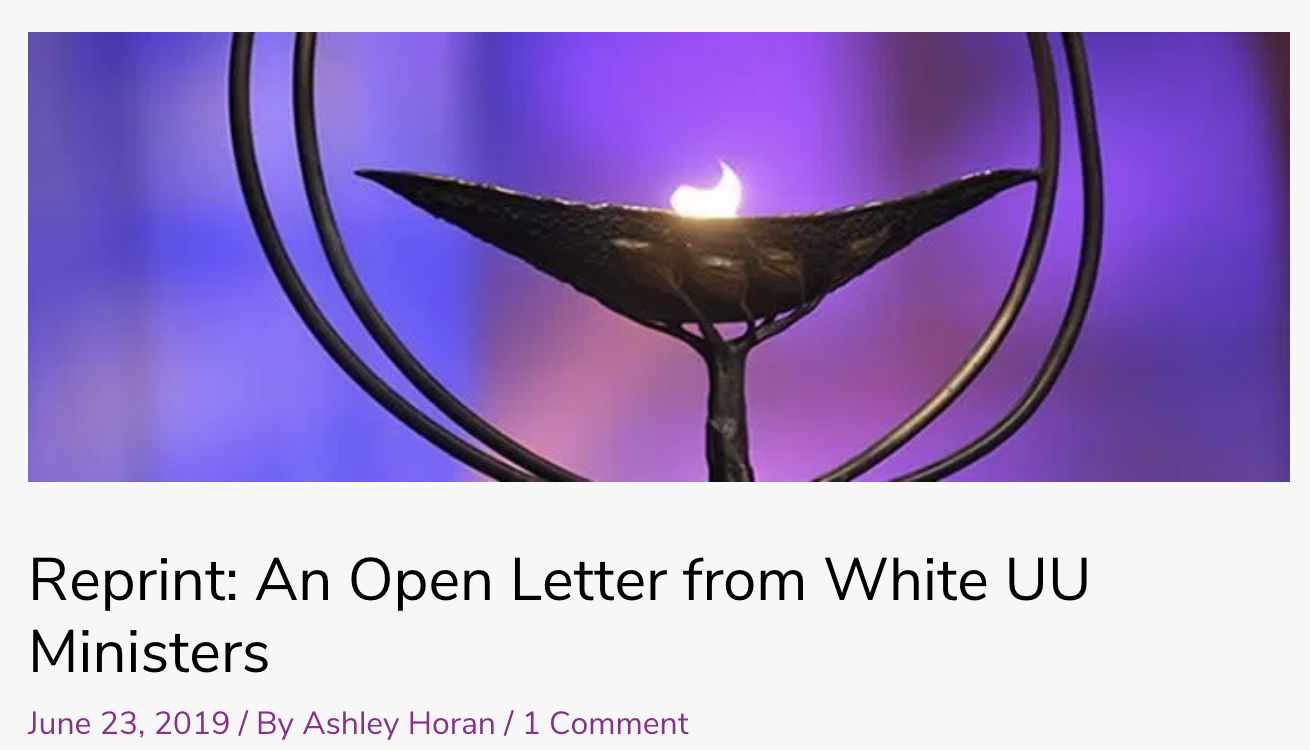 The letter is okay as far as it goes, condemning racism and bigotry, but it’s truly excessive, and could have been something confected by Oberlin students attacking Gibson’s Bakery.  Four things strike me about the letter.

1.) Its self-flagellation and attacks on the UU church itself. It’s almost like something written by a dunce-capped malefactor during China’s Cultural Revolution, declaring that the church, and themselves, are complicit in racism and harm.

2.) It accuses the UU church of harboring a “white supremacy culture”, i.e., the church is structurally racist. From what I know of the church and the several adherents I know, I don’t believe this at all. It’s liberal, tolerant, and full of kind people. Nevertheless, the ministers were so stung by what Eklof did that they wrote stuff like this:

Is the first bit really an accurate portrayal of UU? I doubt it. I saw no white robes at the UU event I attended. But if you’re an adherent, weigh in.

3.) It goes on at length about the “harm” done to people by Eklof passing around his book (of course, people didn’t have to read it). And it makes the common and fallacious claim that the offense engendered by the book distribution are forms of VIOLENCE (second bold section below is mine):

When unjust power structures–and those who benefit from them–are exposed and critiqued, backlash is predictable.  We often conflate critiques of our behavior with condemnations of our personhood.  Here, however, we affirm that Unitarian Universalist ministers must act in solidarity with those harmed by the power structures, while also unequivocally declaring that although all people have inherent worth and dignity, all behaviors and ideas do not.  Ideas and language can indeed be forms of violence, and can cause real harm.  It is disingenuous at best, and malicious at worst, to argue that those who have been targeted by systemic violence have an obligation to bear witness to “ideas and words” that demean and diminish their personhood and discount their lived experience.  The predictable “freedom of speech” arguments are commonly weaponized to perpetuate oppression and inflict further harm.

No, dear ministers, ideas and language are not forms of violence, though they may offend people. If they were real violence, they would be against the law. And offense alone, at least in the US, is not enough to warrant banning speech. But it apparently is in the UU church, which seems to be unitarian in promoting a unity of opinion. (Note too, the “lived experience” trope and the notion that a book can “diminish personhood”, a claim that I’ve never fully understood.)

4.) Worst of all is this claim, which I’ve put entirely in bold:

We recognize that a zealous commitment to “logic” and “reason” over all other forms of knowing is one of the foundational stones of White Supremacy Culture.  Instead of accepting the frame of Rev. Eklof’s arguments and debunking them, we instead affirm the following:

What other “forms of knowing” are they talking about? And the argument that “logic” and “reason” (both in scare quotes) are foundational stones of “White Supremacy Culture” is ludicrous, offensive, shameful, and not even wrong. What they’re arguing here is that there’s no need to confront Ecklof’s arguments; they can just dismiss them because they’re ideologically impure. yet according to the Amazon summary, Ecklof indicts the church for things that many of us indict universities for, and doesn’t that deserve a discussion instead of banning and expulsion.

Again, I haven’t read Eklof’s essays, but you don’t really need to read them to criticize this breathless overreaction. Yes, perhaps what Eklof said was offensive to minorities or women, and the UU ministers could have condemned his message (if it was really that bad), but in a way less offensive to liberal secularists. By equating words with violence, by making the probably-false claim that Unitarian Universalism is ridden with White Supremacy Culture, and by claiming that logic and reason are tools of oppression, this group of ministers have embedded themselves in the offense culture. Haven’t they heard of being forgiving and charitable?

At any rate, since UU is one of the few “religions” that I haven’t criticize strongly, as it is nondogmatic, liberal, and (I thought) charitable,  I was truly disappointed to see it turning into The Evergreen Church of Perpetual Offense. I condemn their attack on reason and logic, and their claim that words are the same thing as violence.

50 thoughts on “Unitarian Universalist ministers flagellate themselves and the church for one bad apple, assert that logic and reason are tools of white supremacy”