Do we really need another article that telling us that evolution isn’t always “progressive”, going in a straight line towards traits that we consider “advanced”? (These are nearly always traits that humans have, like intelligence, high consciousness, and big brains.)

This form of evolution, often represented by the “straight line” diagram of human evolution shown in the new The Conversation article below, also called “orthogenesis,” is said to misrepresent evolution in several ways. It implies, for instance, that there’s an inherent directionality to evolution, which isn’t true (though in some cases, like arms races, it can approximate truth). It could be taken to imply that the directionality isn’t conferred by natural selection, but by some teleological force, like the “drive to consciousness” broached by computer scientist David Gelernter in a recent, dreadful, and grossly misleading critique of evolution. And it implies a scala naturae—a “scale of nature”—that could be (and was) taken as a ranking of how “evolved” something was. In the case of human races, the scale was used to imply that some races (invariably white ones) were more evolved than, and hence superior to, their pigmented brethren.

Click on the screenshot to read this short piece: 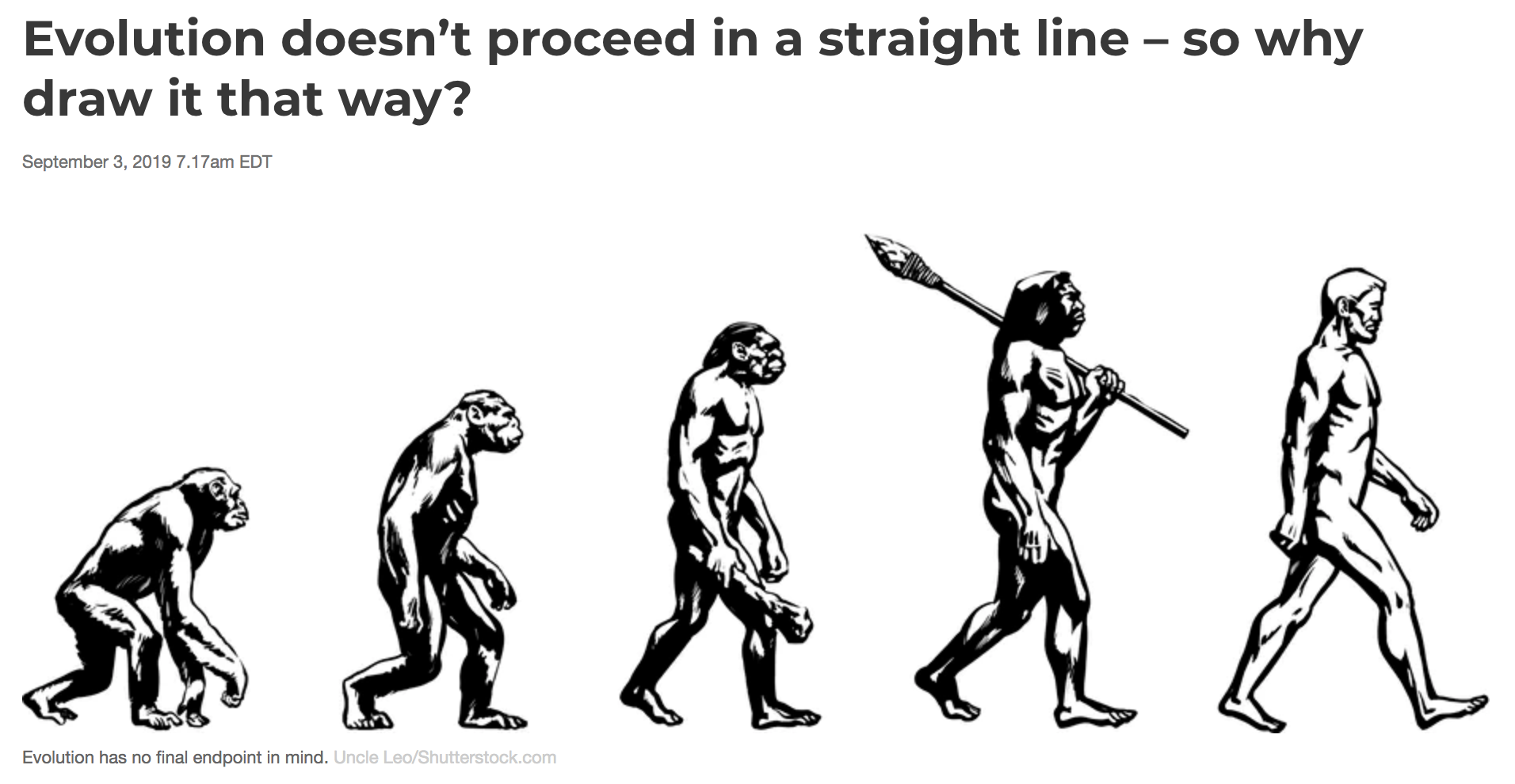 Perhaps I’m being too captious here. Perhaps misconceptions about evolution like this one need constant rebutting as each new generation becomes prey to scientific errors or the blandishments of creationists. Still, the three authors, all biologists, spend most of their time decrying the cartoon depiction of orthogenesis, like the one above, presenting lots of examples (easy to find), but neglecting some really interesting glosses on this idea. In fact, all they really say is that evolution doesn’t work this way, and pointing out three errors (an excerpt):

Originating with Plato and Aristotle, this view gets three main things wrong.

First, it holds that nature is organized hierarchically. It is not a random assortment of beings.

Secondly, it envisions two organizing criteria: things progress from simple to perfect and from primitive to modern.

And thirdly, it supposes there are no intermediary stages between levels in this hierarchy. Each level is a watertight compartment of similar complexity – a barnacle and a coral reef on the same rung are equally complex. No one is halfway between two steps.

Well, I’d argue that the first “error” is wrong, but is not necessarily implied by the figure, which shows straight-line evolution in a lineage, while the hierarchy comes from the branching of lineages, barely mentioned. And I’d argue as well that the progression doesn’t really imply that there are no intermediate stages. It just shows selected segments of an evolutionary lineage.

Had I written this, I would have added a few other points to flesh it out:

a). You can convert a branching bush into a straight line simply by following one line of ancestry. Here’s part of a slide I use to show that point in the evolution of the modern horse, which traces only the path to one twig on the luxuriant historical branching of equids: 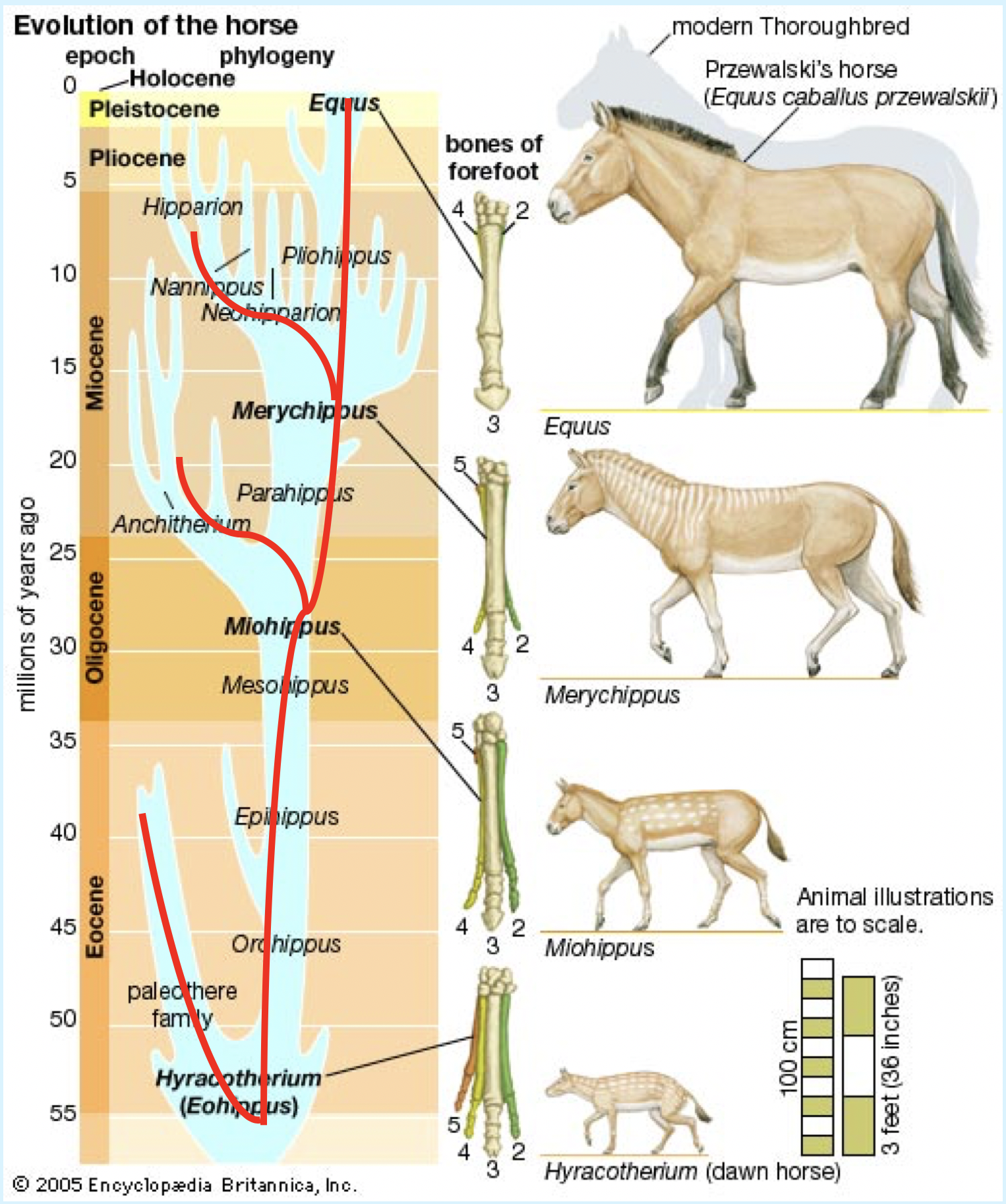 The human “progression” above can be derived from picking out one lineage in the evolution from early australopithecines to modern H. sapiens, but hominin evolution was a branching bush, and many of the twigs went extinct. In fact, we are still ignorant of the exact lineage that took early hominins to modern ones.

b.) I would have added that sometimes evolution might take place in one direction, but it’s because natural selection, which could be reversed, drives it that way. No irreversible teleological forces are involved. I gave the example of predator-prey “arms races”, in which predators become ever faster, prompting the prey to also evolve fleetness. Or there might be an “open niche” in which mutations push evolution in a single direction. Brain size (and intelligence) in humans might be one example, although even here not all lineages got bigger and bigger brains: some died out and some, like H. floresiensis, might even have evolved reduced brain size as a consequence of smaller body size (the origin of this species is, of course, a mystery). Another example might be the ancestors of whales, which likely found an open niche in the sea, full of unexploited food. Ergo early whales became more and more amphibian and then fully marine. Natural selection made them that way: more marine whales presumably got more fish and experienced less competition.

c.) I would have pointed out examples in which evolution is regressive, losing features that evolved adaptively in other lineages. Fleas lost their wings, as did penguins. Tapeworms lost most of their sensory systems and their entire digestive system. Some Antarctic fish have lost their swim bladders, and the subgroup of icefish have also lost their hemoglobin, becoming the only vertebrates to lack that protein (dead hemoglobin genes still reside in their genomes, giving evidence of their ancestry). To compensate, they have also lost their scales, so that they can exchange oxygen through their skin. (By the way, I know of no good adaptive story for the loss of hemoglobin in this group).

At any rate, the misconceptions about orthogenesis give plenty of opportunity to impart lessons about and cool examples of evolution. What a pity that the three authors blew this chance (Conversation articles can be longer) to concentrate on example after example of straight-line evolution.

As I said, the article is not harmful to scientific education; in fact, it’s marginally useful. But it could have been much more useful.

48 thoughts on “Superfluous article of the month”