I’m catching up with duck reports, and have at least three to go. As summer wanes, and the Duck Days dwindle down to a precious few, I have bittersweet feelings. I’m proud that my two co-duck-farmers and I raised 29 out of 30 ducklings, and from three separate broods. Further, they’re all healthy and will fly away to Duck World. The flying away is the bittersweet part, as I never know where they go, and know I’ll never see any of them again, at least not that I’ll recognize (Honey’s the exception). And will this be the last time I see Honey? I still regret that I didn’t know that “Katie” was really Honey until about a week ago.

But Daphe has at least two weeks to go before her flight feathers grow in, so I’ll have at least one duck to tend until then.

So, here are some photos and two videos of recent doings at Botany Pond.

First, from three days ago, we have a Bad Case of Zoomies in Daphne’s brood. They were already flying then, but I never saw them really take off. But the “zoomies,” in which they go underwater, do short hops, race across the pond, and flap their wings in place, surely constitute a form of practice for flying.

Here are several minutes of zoomie fun, with all the attendant frenzy. Although I didn’t think I saw any flight when I was filming, you can see here that a couple of ducks actually take off a bit. But they were already able to fly quite well by then; my Secret Duck Farmer saw that—but I still haven’t:

And spontaneous solo zoomies from one of Daphe’s brood:

Honey with her chosen mate: Ritz Quacker. He’s a large and resplendent drake, and very protective of Honey, but his head is not fully green. I’m not sure if he’s a hybrid, molting, or just a green-deprived duck. He’s also HUGE (look at the size disparity): the biggest drake I’ve seen yet. Honey knows how to pick ’em! 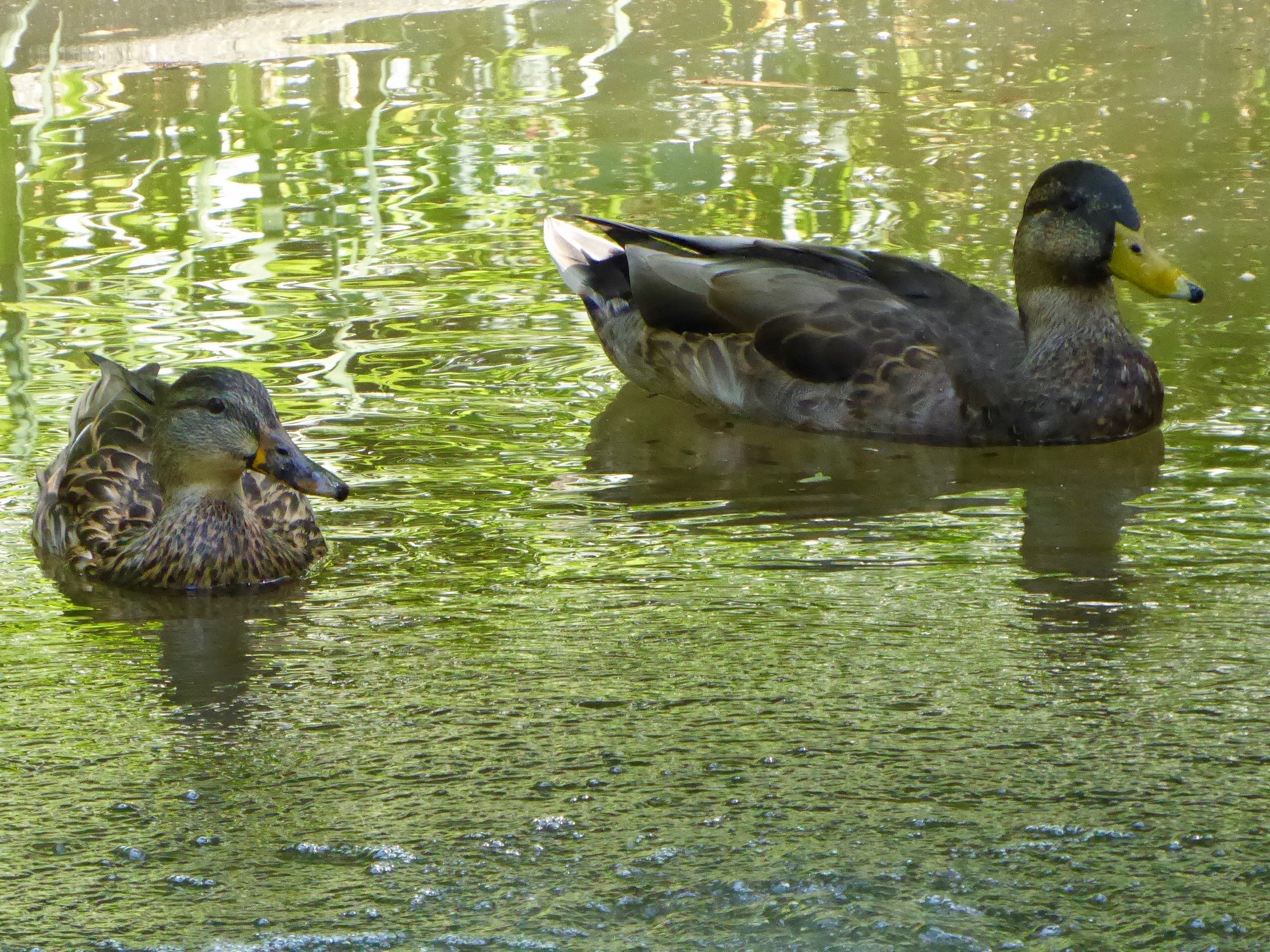 I always love pictures of ducks with open bills; it’s hard to take them and they look cute—as if they’re smiling—when they do it: 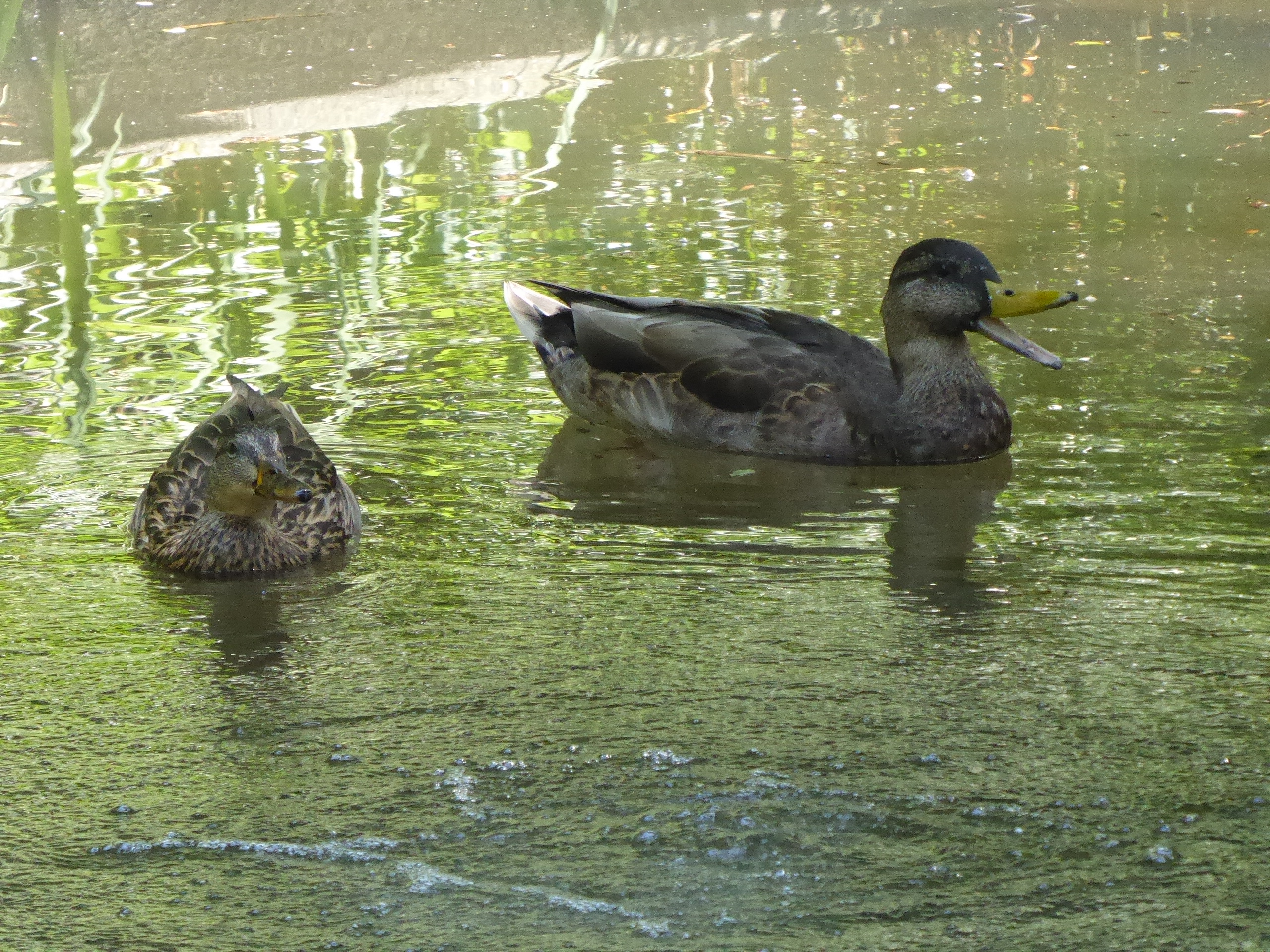 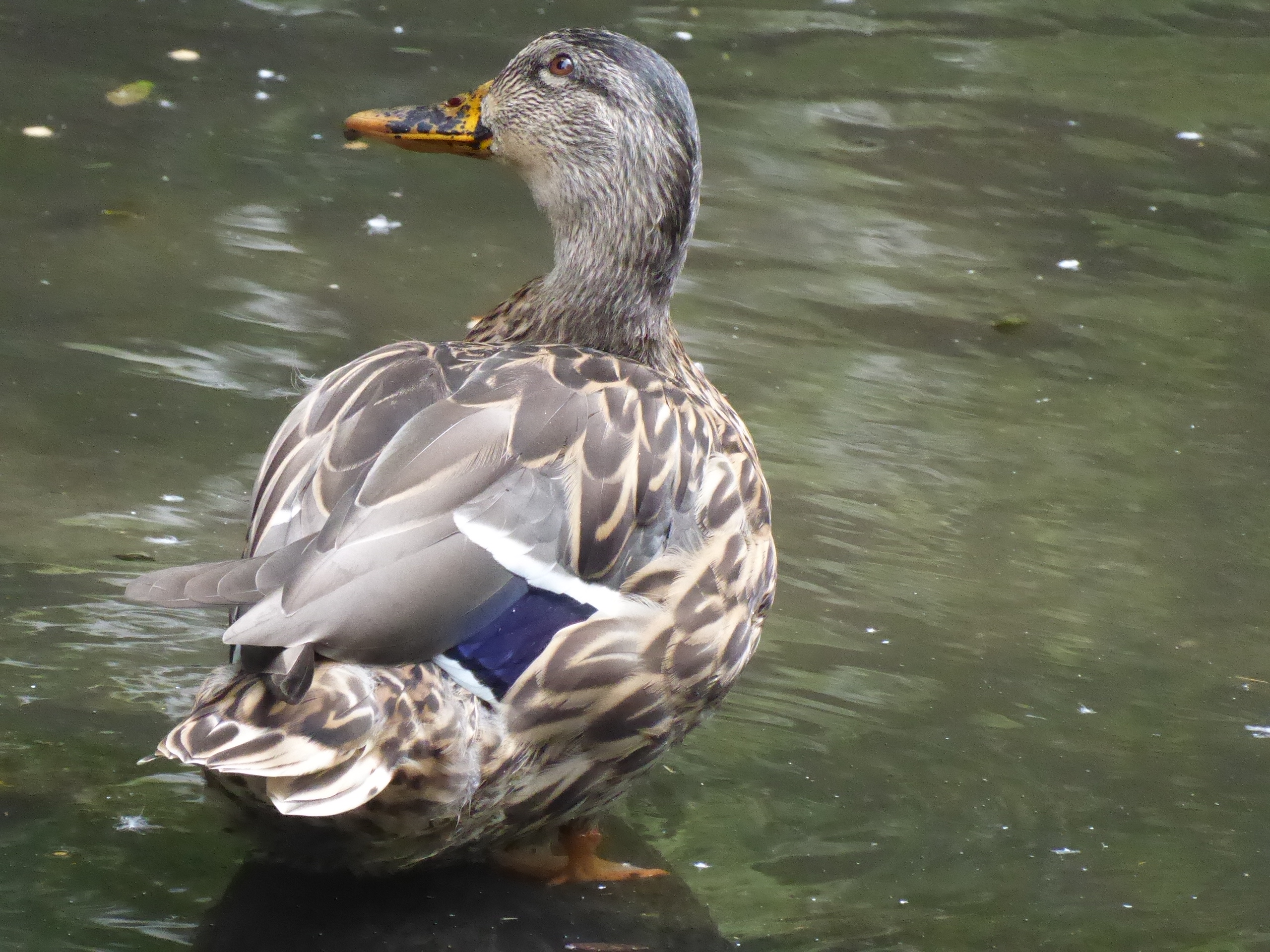 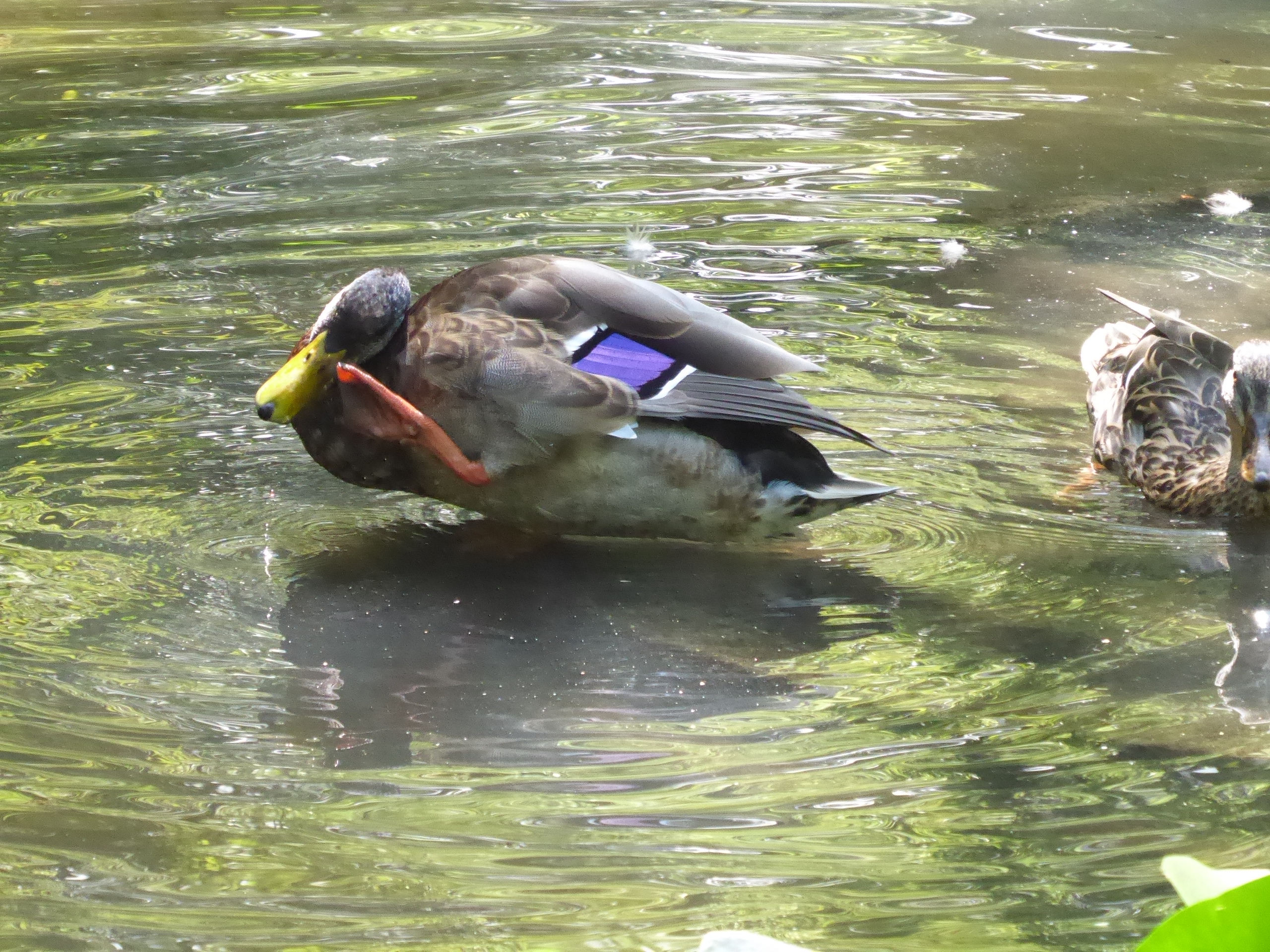 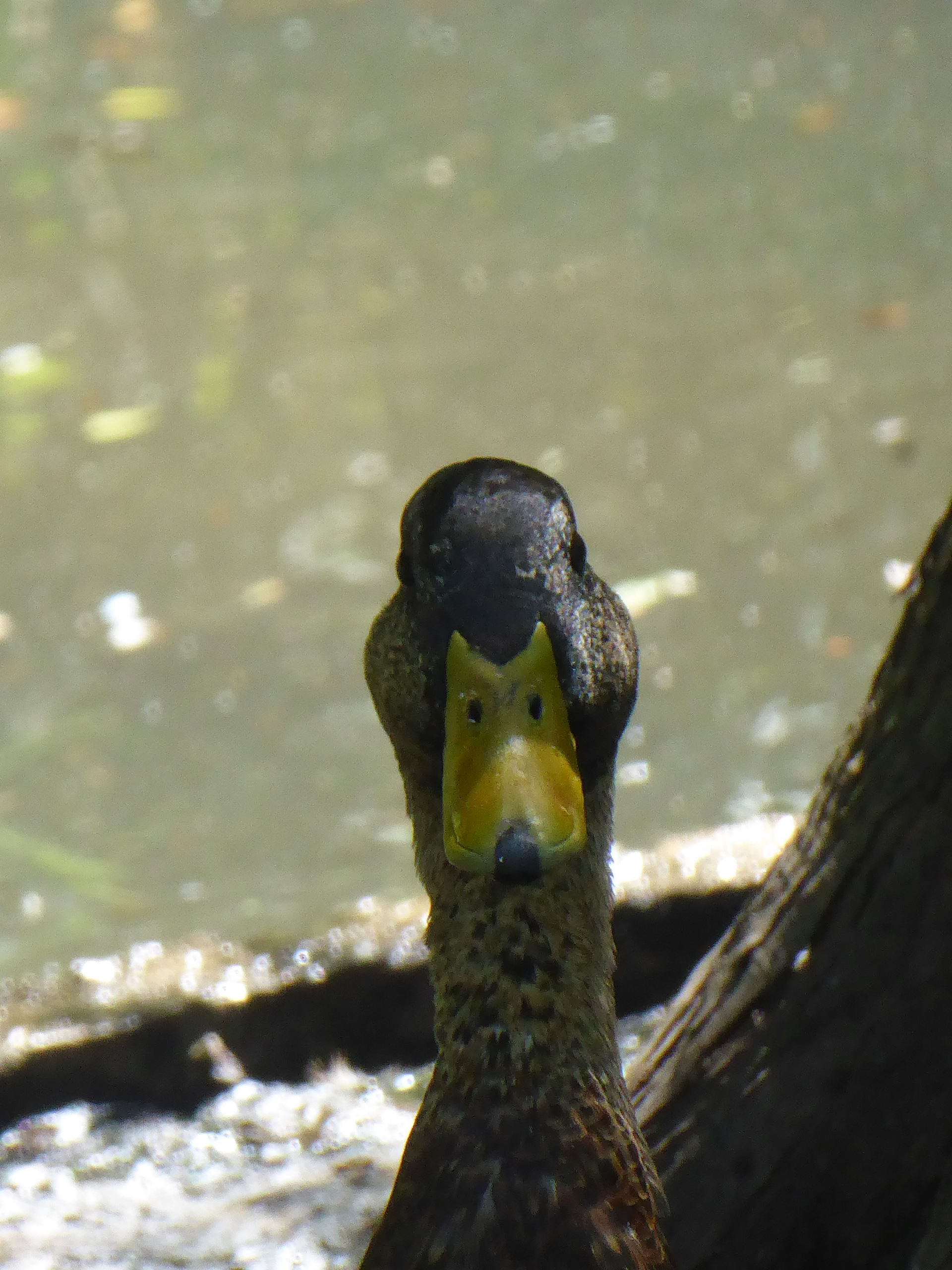 Turtles. Most are covered with algae, which the ducks like to nibble on (but the turtles don’t like being the nibblees): 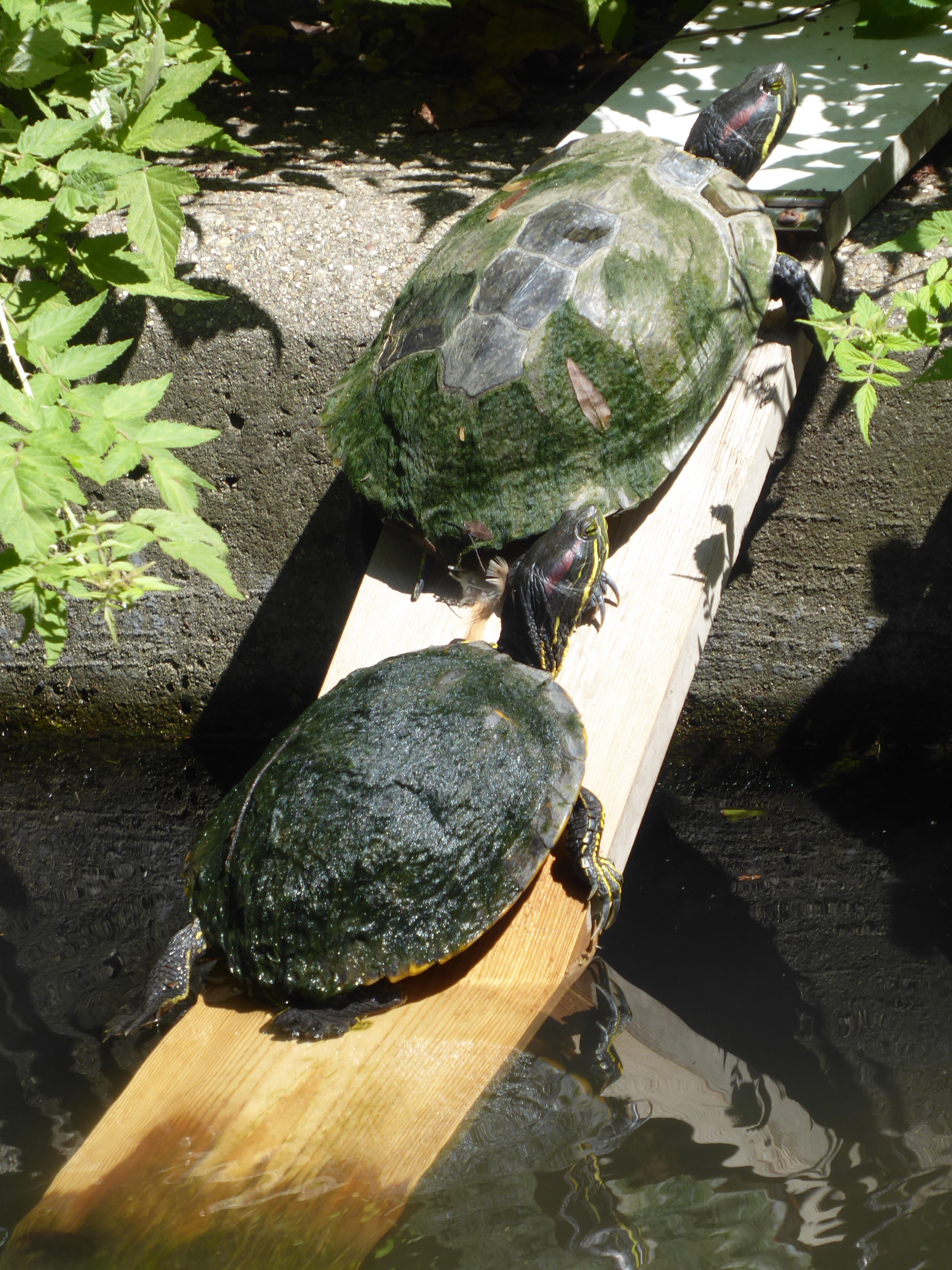 This one has leaves, too: all the detritus of the pond. In a few months they’ll burrow in the mud and spend the winter hibernating: 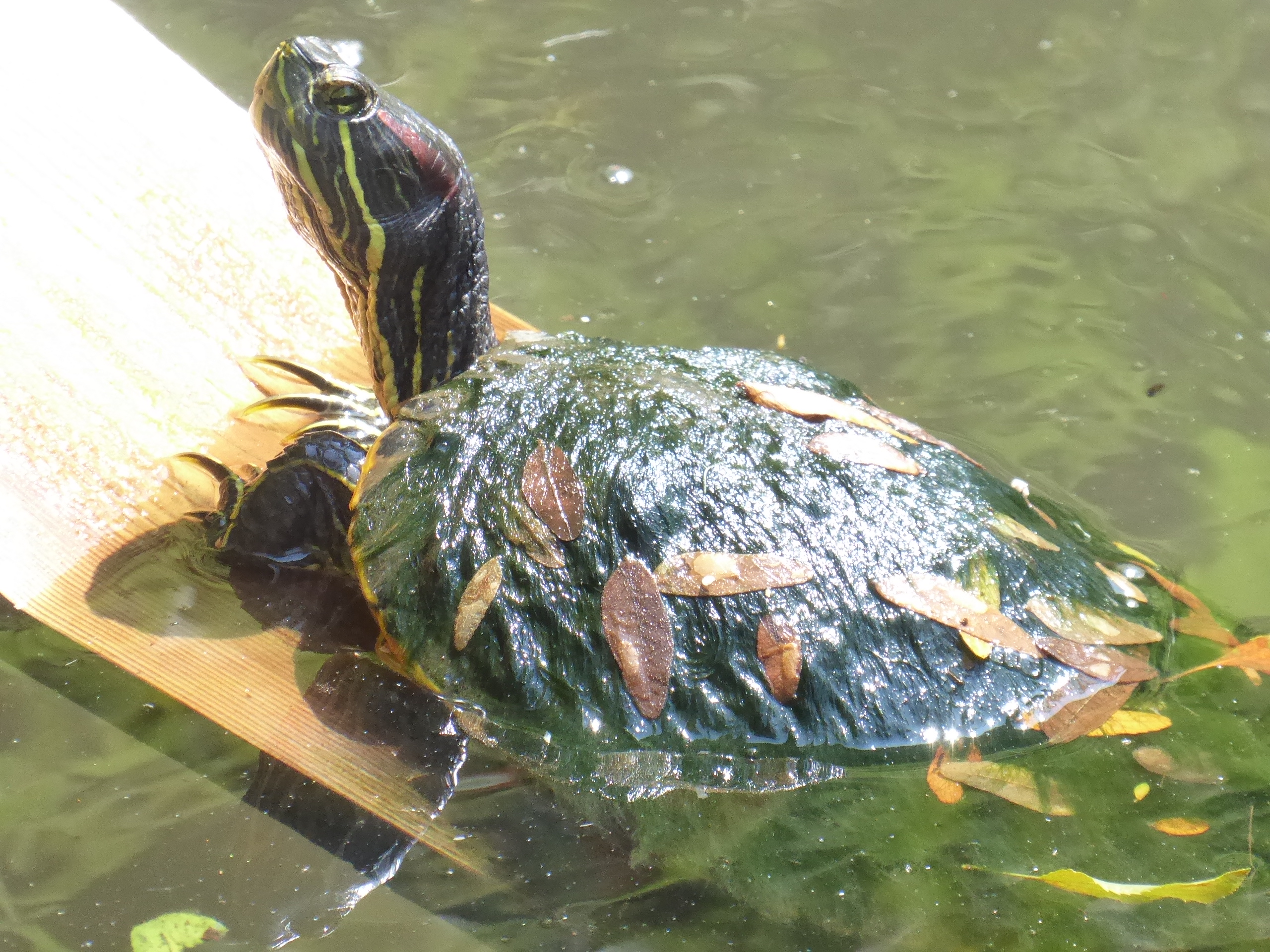 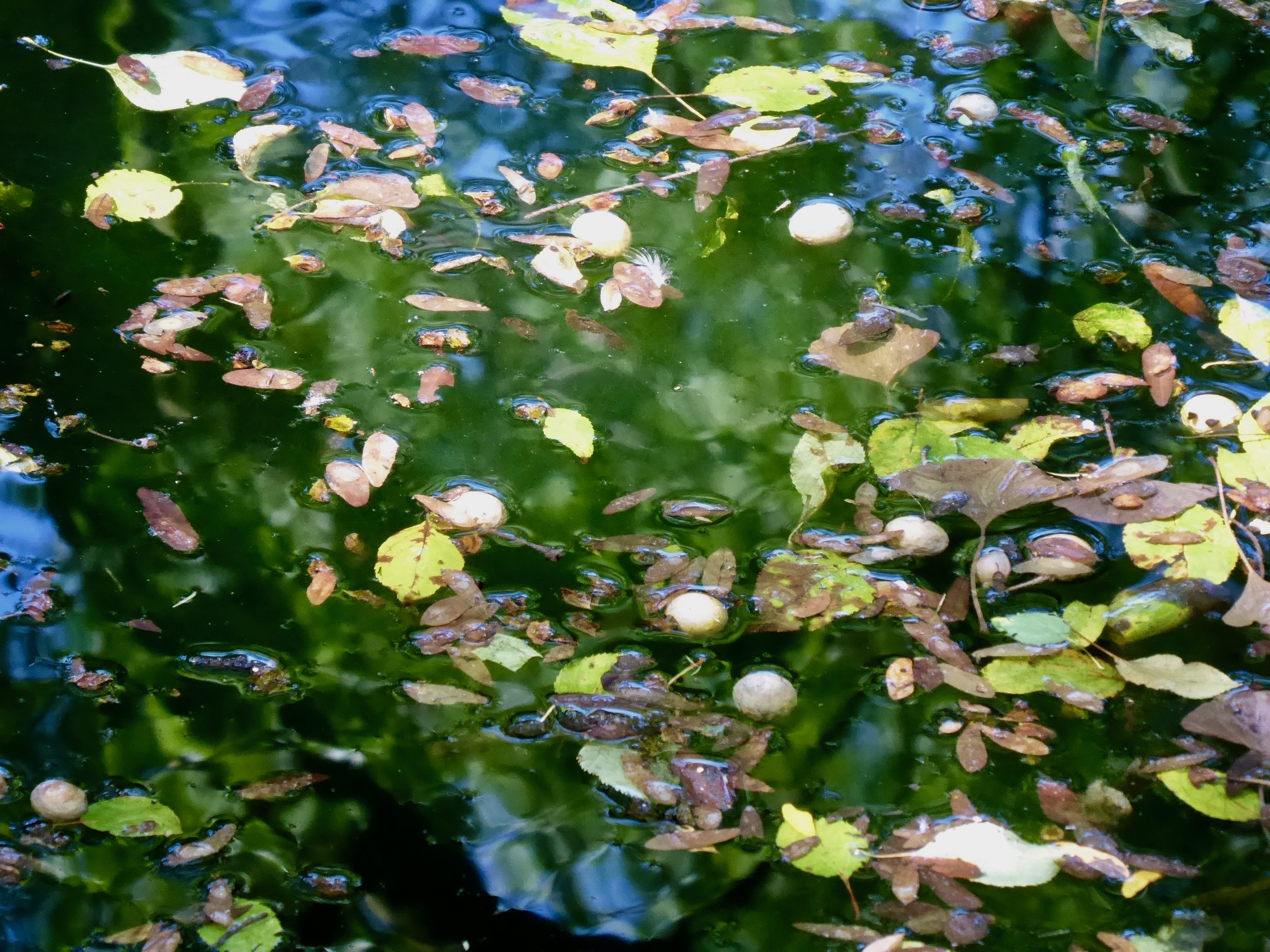 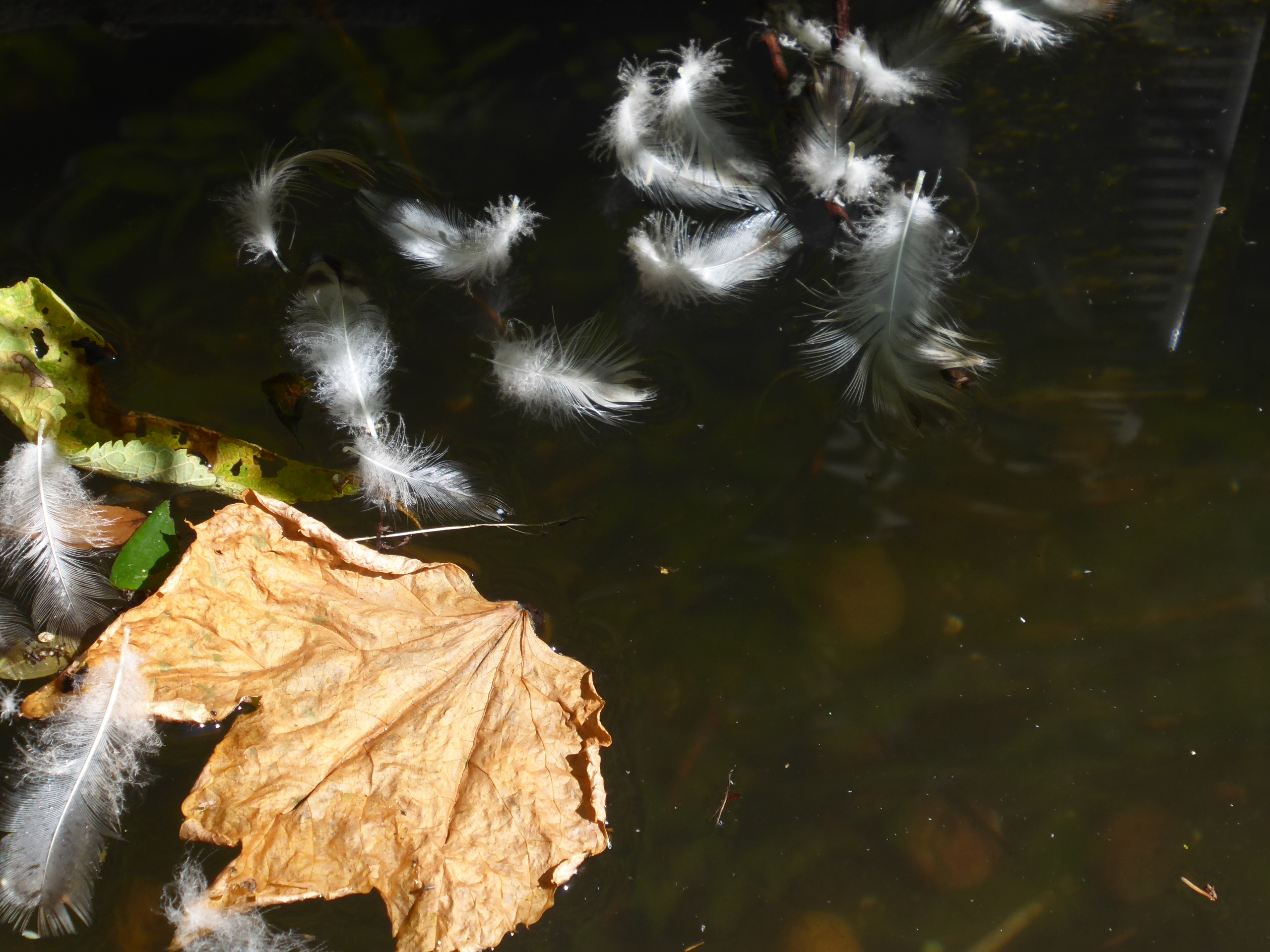 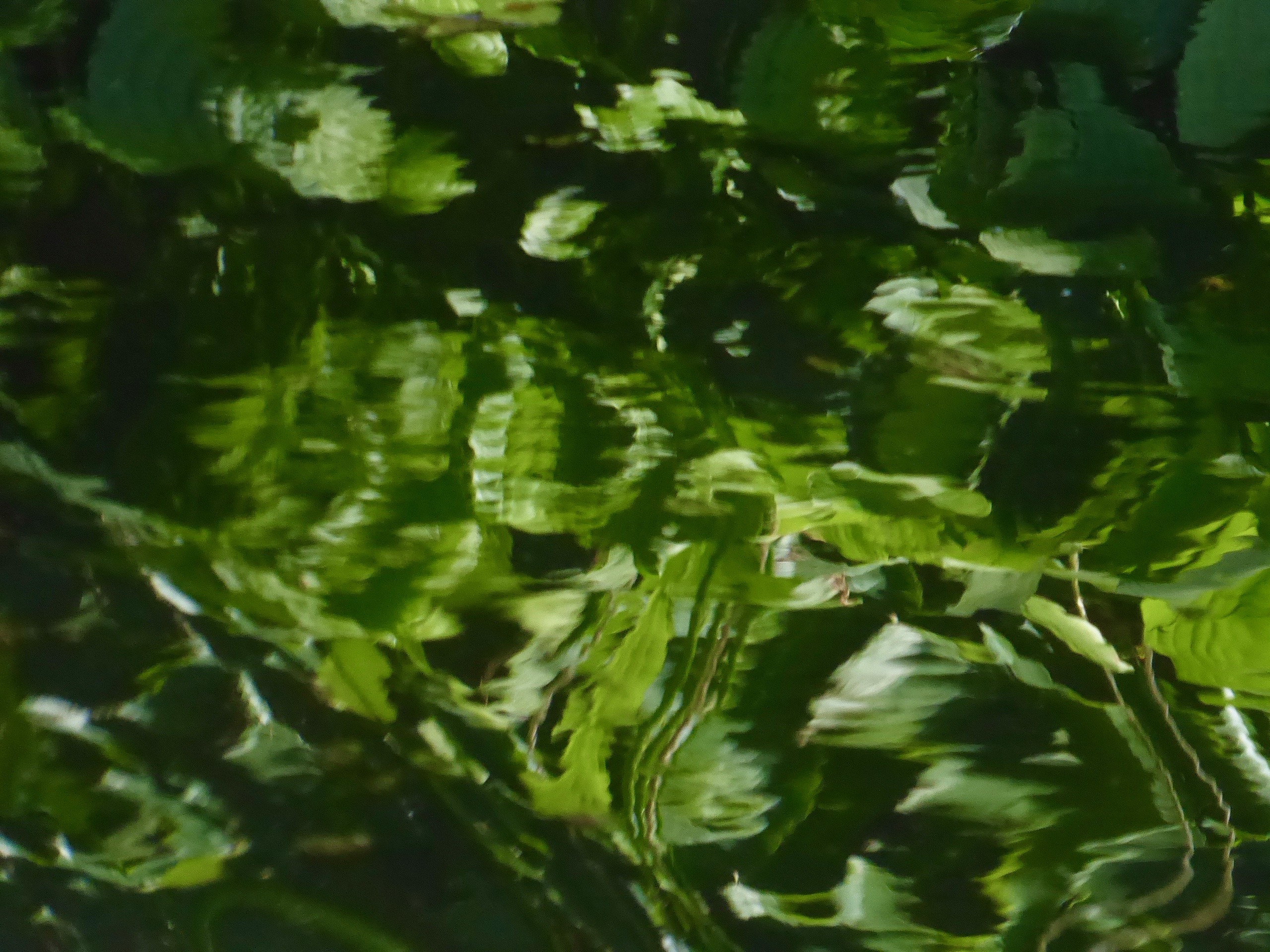