If you live in Chicago, you’re constantly reminded of the huge number of homicides in the city, many of them gang-related, most gun-related, and the largest proportion of identified victims African-American. According to the Chicago Tribune, which tracks these data, in the last 365 days there were 547 homicides. Of these, 314 involved guns, 209 had unknown causes, 19 involved stabbings, and 5 involved other causes. That is, of all homicides in which the cause could be ascertained,  93% involved guns.

The peak of gun violence, as we all know, is in the summer, and I’ve heard gunshots in summer. Granted, the rate of gun deaths is down 11% from last year, but, as you see below, it’s still higher than in the years from 2013-2015. Whether this is a permanent decline in our city remains to be seen, but we still have about 1.5 homicides per day, most by guns. The U.S. and Latin America lead the world in gun deaths, and you can see the death rates of different countries caused by firearms in this chart on Wikipedia. The U.S., for instance, has 12.2 fire-arm related deaths per 100,000 population per year, while Britain has 0.23—a 53-fold difference.

Last weekend we had the biggest spate of gun violence this year, as the New York Times reported in the article below. Seven were killed and 52 wounded in 32 episodes, with more than 300 homicides this year.

CHICAGO — While much of the nation’s attention was focused on the gun massacres in El Paso and Dayton, Ohio, last weekend, Chicago was convulsed by its own burst of violence — the worst weekend the city has seen so far in 2019.

It was an extreme example of the routine but devastating gun violence, often related to gang conflicts, that cities like Chicago, Baltimore and St. Louis experience on a regular basis. The police said seven people were killed and 52 wounded by gunfire throughout Chicago from Friday evening to Sunday, including a 5-year-old boy who was shot in the leg while sitting in a car.

Early Sunday, 17 people were shot in a period of two hours in a small pocket on the city’s West Side, turning residential blocks into chaotic scenes of ambulances, grieving family members and cars pockmarked with bullets.

There were 32 separate shooting incidents throughout the weekend, the police said.

. . .Gun violence in Chicago tends to peak during the summer months, when school is out, the temperature is high and residents spend more time outside at social gatherings, which can be a magnet for conflict. Shootings and homicides have decreased in 2019, but there have been at least 300 homicides this year and 1,600 people shot, according to The Chicago Tribune.

Data from the Chicago Tribune: 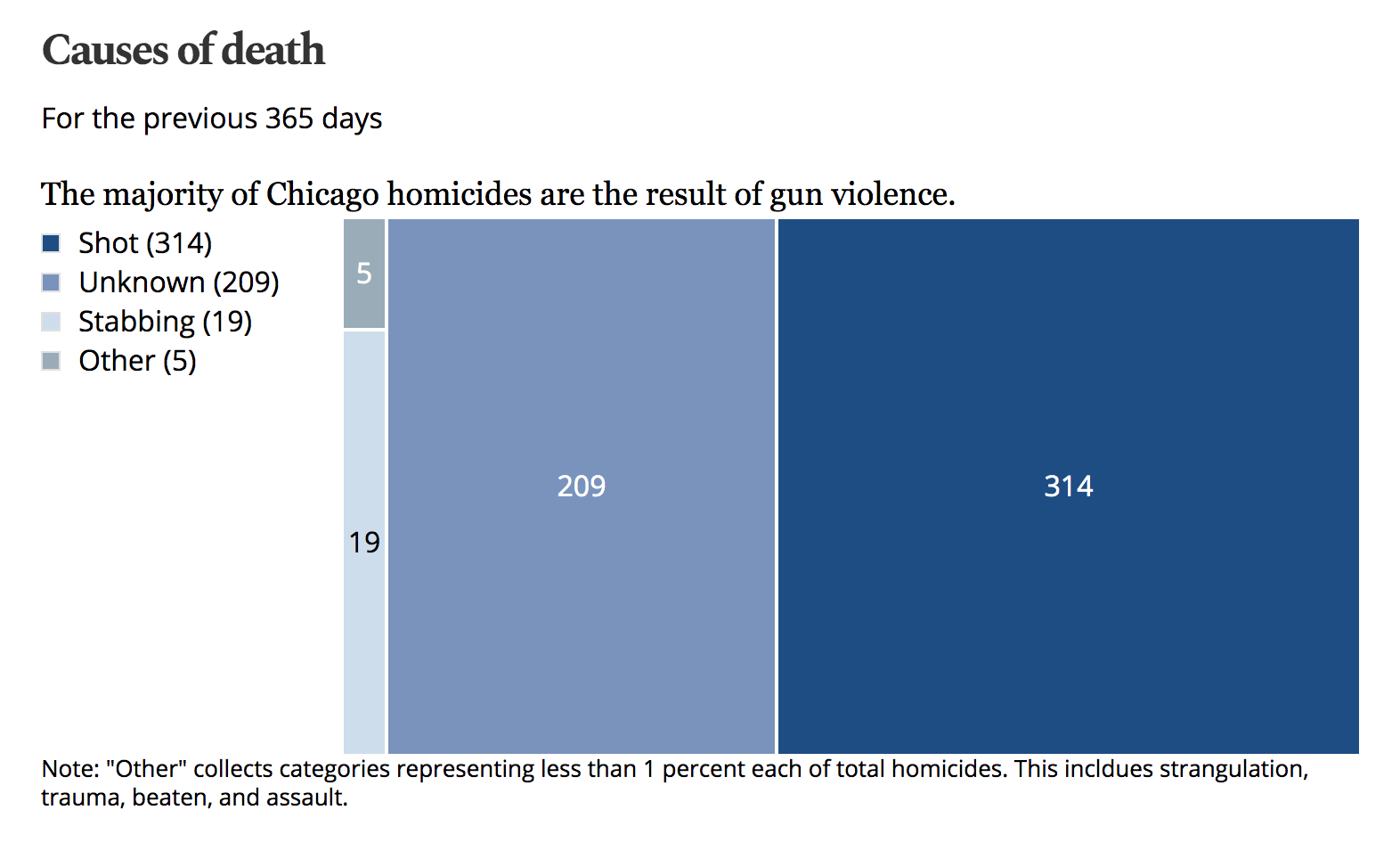 Yes, America, we have a gun problem (the NRA would call it a “criminal problem”, but without easy availability of guns, does anybody doubt that homicides would drop?). My solution, which some readers oppose, is to impose extremely stringent controls on guns; in fact, I’d like to see them banned completely except for target practice or, in rare cases, pest control. My position is extreme, but I think it would save lives.

As an aside, Ivanka Trump tweeted about Chicago’s gun violence this week, and, although she got the total numbers right, she got the circumstances wrong, saying that all the deaths and injuries occurred in one incident:

With 7 dead and 52 wounded near a playground in the Windy City- and little national outrage or media coverage- we mustn’t become numb to the violence faced by inner city communities every day.

Well, I can excuse that error, though the “violence faced by inner city communities” seems a bit racist, as there are plenty of homicides outside of the inner city. But her message is in the right direction: we have to do something about gun violence.

But because she is a Trump, that message was completely obscured by her mistake, and so HuffPost jumped on her. Rather than highlight the epidemic of gun violence in Chicago, they prefer to bash Ivanka for her mistake. To wit:

“It wasn’t a playground, it was a park. It wasn’t seven dead. It wasn’t 52 wounded in one incident, which is what this suggests. It’s misleading,” Lightfoot said. “It’s important when we’re talking about people’s lives to actually get the facts correct, which one can easily do if you actually cared about getting it right.”

Lightfoot said her focus was to protect and run the city, and she wouldn’t allow herself to be distracted by “nonsense tweets from people who don’t know what they’re talking about.”

Our new Mayor, Lori Lightfoot, was all over the news last night—not calling attention to the gun violence, which on a yearly basis far exceeds deaths by mass shootings, but going after Ivanka Trump for her mistake about the circumstances.  In this case, contra Lightfoot, the circumstances of the shootings aren’t nearly as important as the constant toll of gun-related homicides. But such is the hatred of Trump (a hatred I share), that every issue somehow gets turned into a criticism of the President (even via his daughter).

Let’s forget Ivanka: we have to do something about guns. But, as I’ve said before, the cry for gun control—and most Americans favor stricter regulations—goes up right after mass shootings (we’ve had three lately), but over time dies down, and business gets back to normal. You can still order assault-style rifles online, which is a travesty. And, of course, the carnage leads to stuff like this, which is about the saddest sign of our problem that I can imagine:

Back-to-school essentials in the US pic.twitter.com/T37QbyznqZ

This Florida school is selling bulletproof panels that can be inserted into students' backpacks https://t.co/EACo7MVXL1 pic.twitter.com/Qbhg02TuaK