Today we have some lovely dragonfly photos by Mark Sturtevant, whose notes and IDs are indented (the links are also his):

This will be the first of many occasional posts about the dragonflies that I had photographed over the previous summer. I enjoy looking for all insects when out with the camera, but it must be admitted that I am always ‘thinking about dragons’. There is just something about them.

First up are Halloween pennants (Celithemis eponina), beginning with a female, and then some interesting perspectives of a young male who was struggling to hold on during a breezy day. Like many dragonflies, males start out with colors that are similar to females, but they then change as they age. This one will become increasingly red over time. 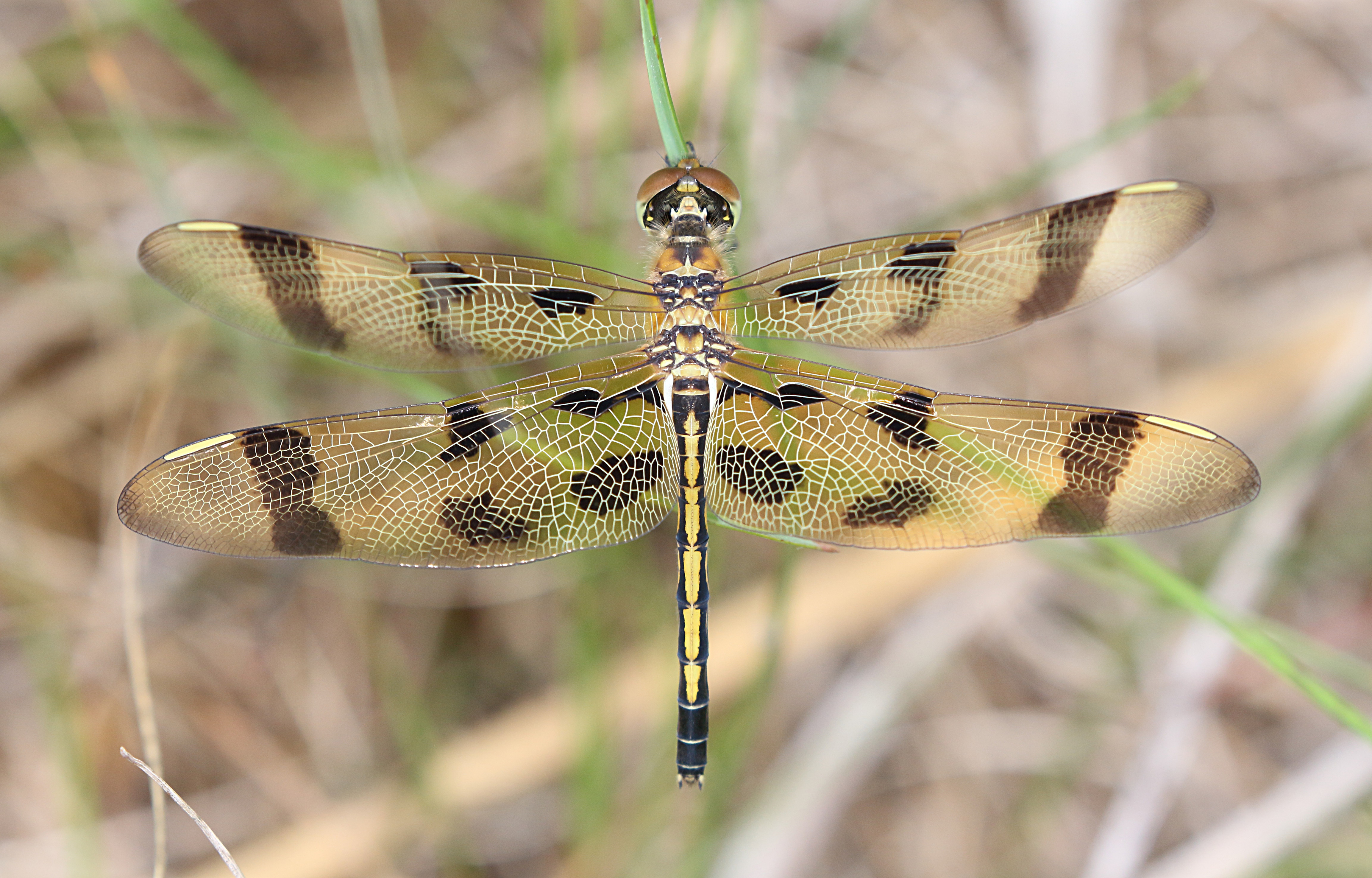 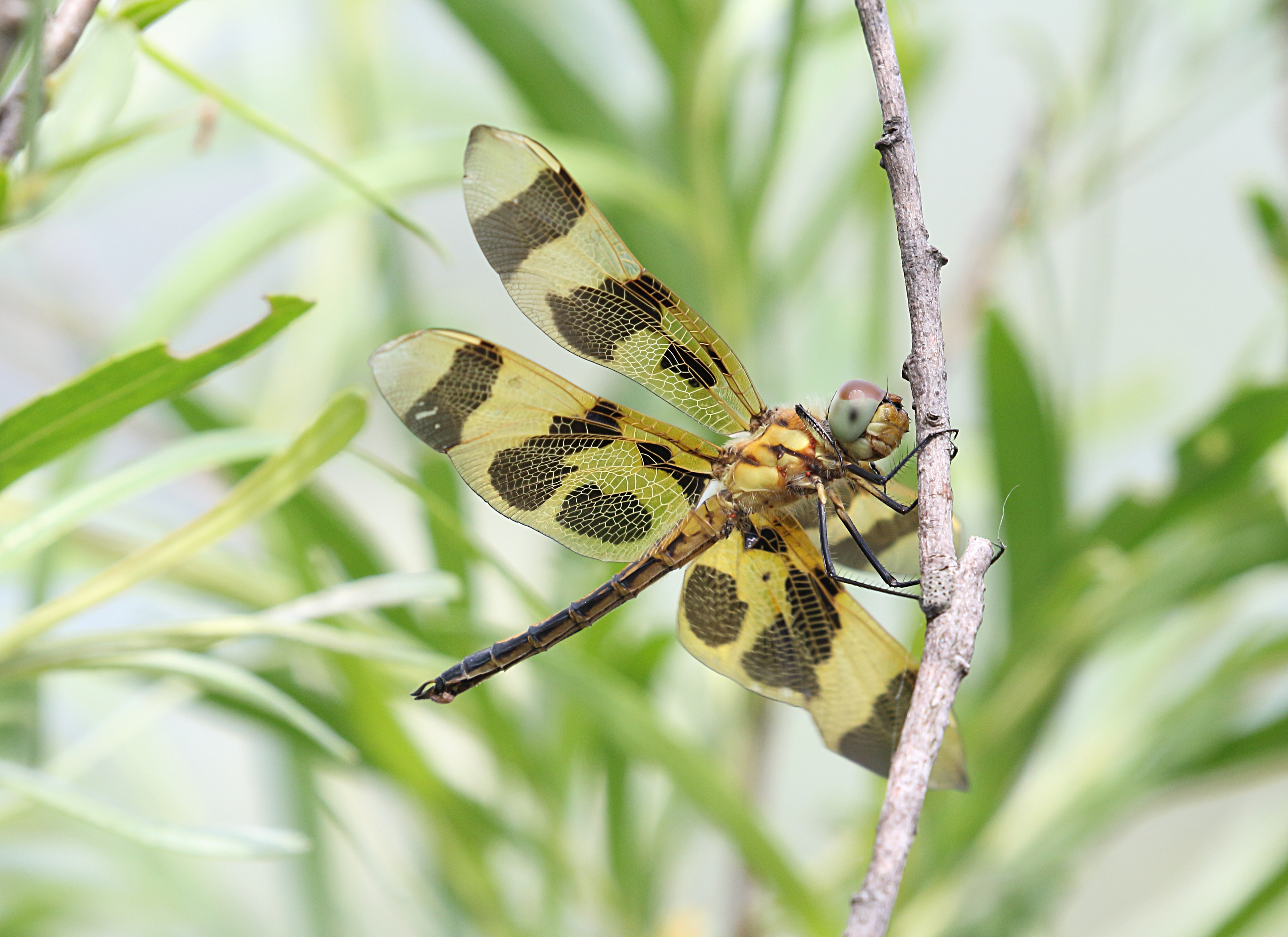 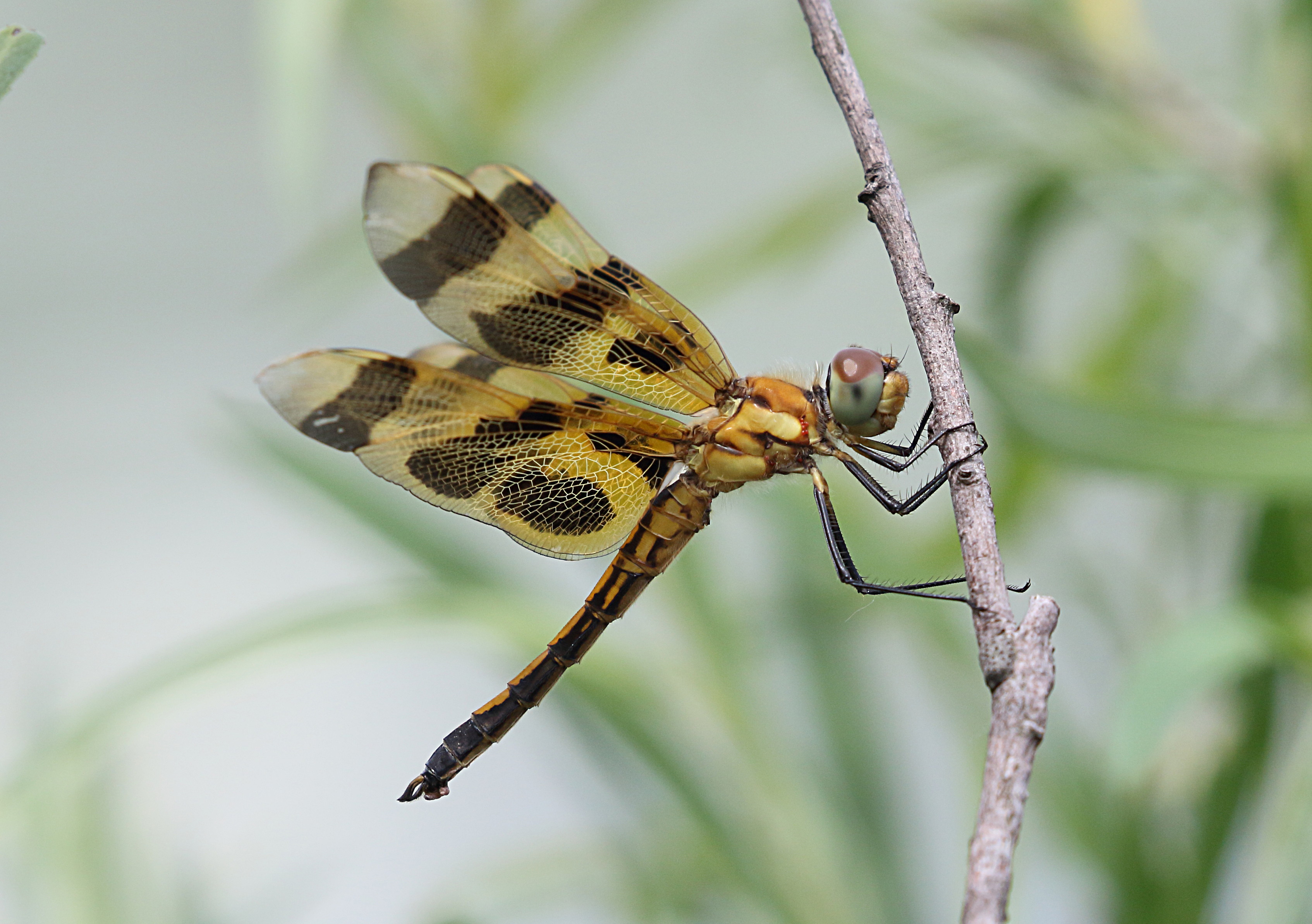 After an immature dragonfly emerges from the water, they will spend many hours as “tenerals”, which means that they are not yet hardened up enough for sustained flight. They are then very easy to approach and photograph. The next two pictures are of a female teneral banded pennant (Celithemis fasciata). I especially like how the light plays with their sparkly new wings at this time. Clicking to embiggen these pictures is recommended. 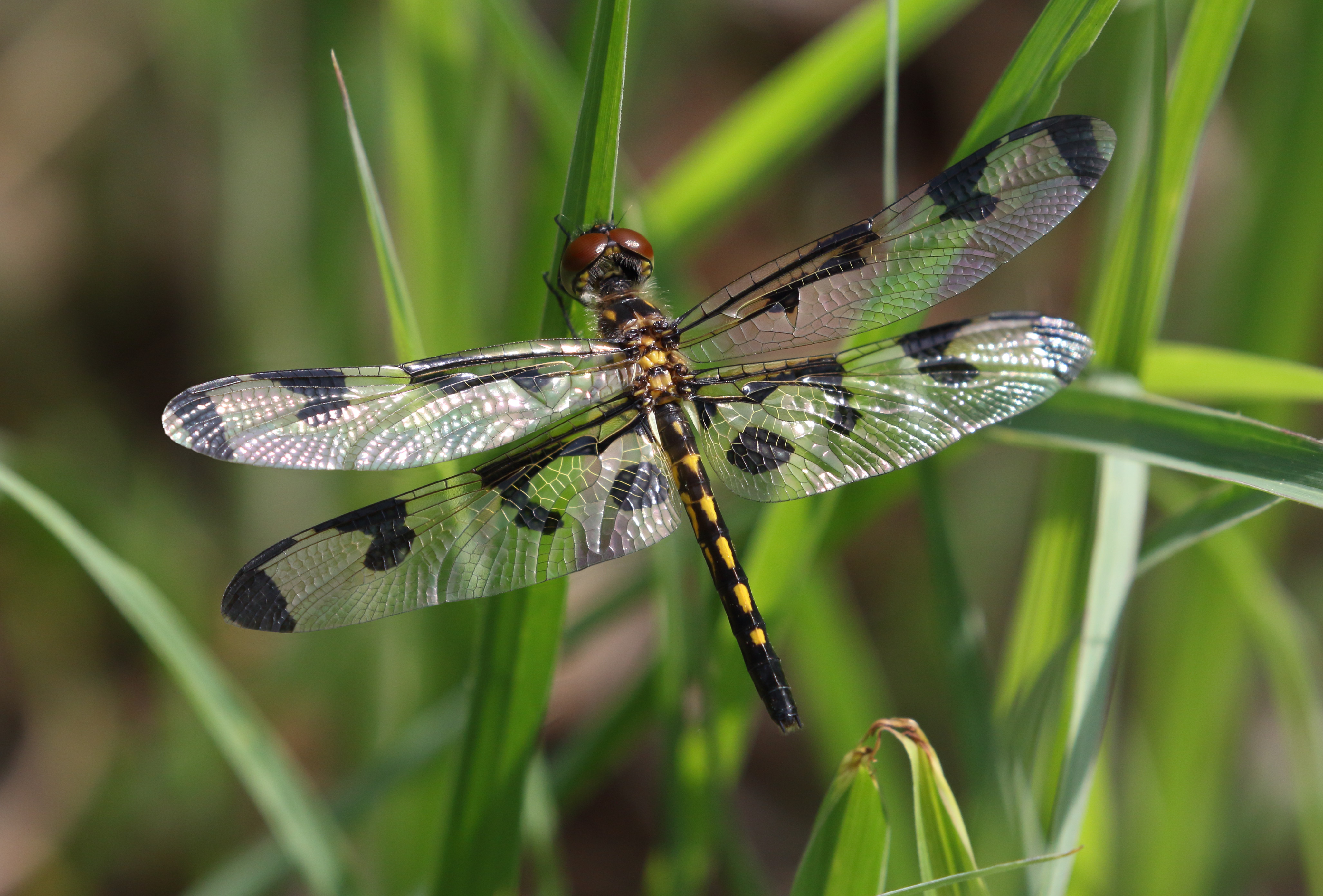 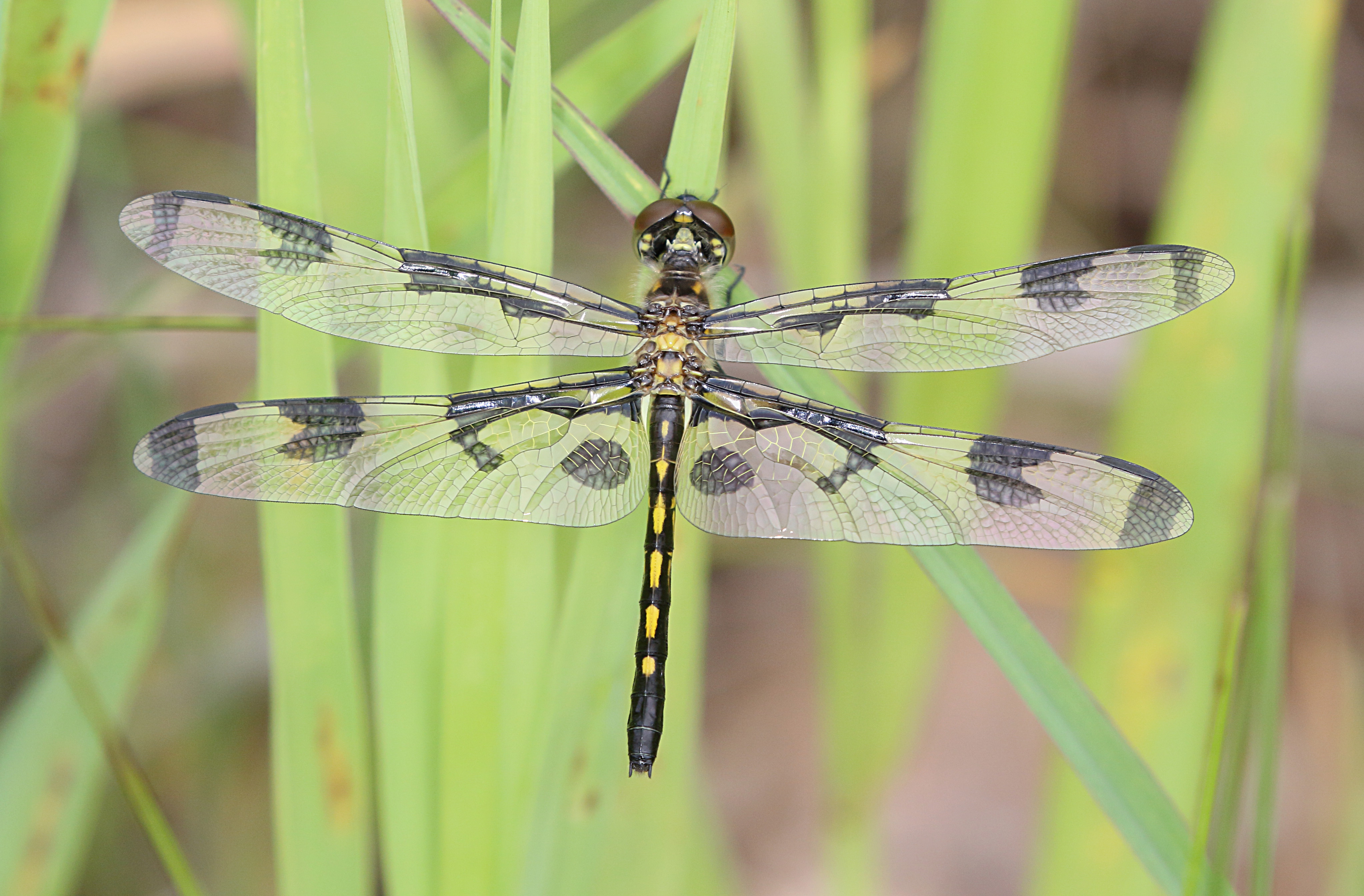 During the early summer the most common dragonfly around here is simply called the dot-tailed whiteface (Leucorrhinia intacta). There are certain fields where these are simply everywhere, and they are both useful and annoying. They are useful when their flight triggers another dragonfly to reveal itself since they often fly at each other. But in their numbers they will also trigger a dragonfly to fly from its perch while I am already stalking it. Anyway, here is a pair that is in the ‘wheel’ mating position. 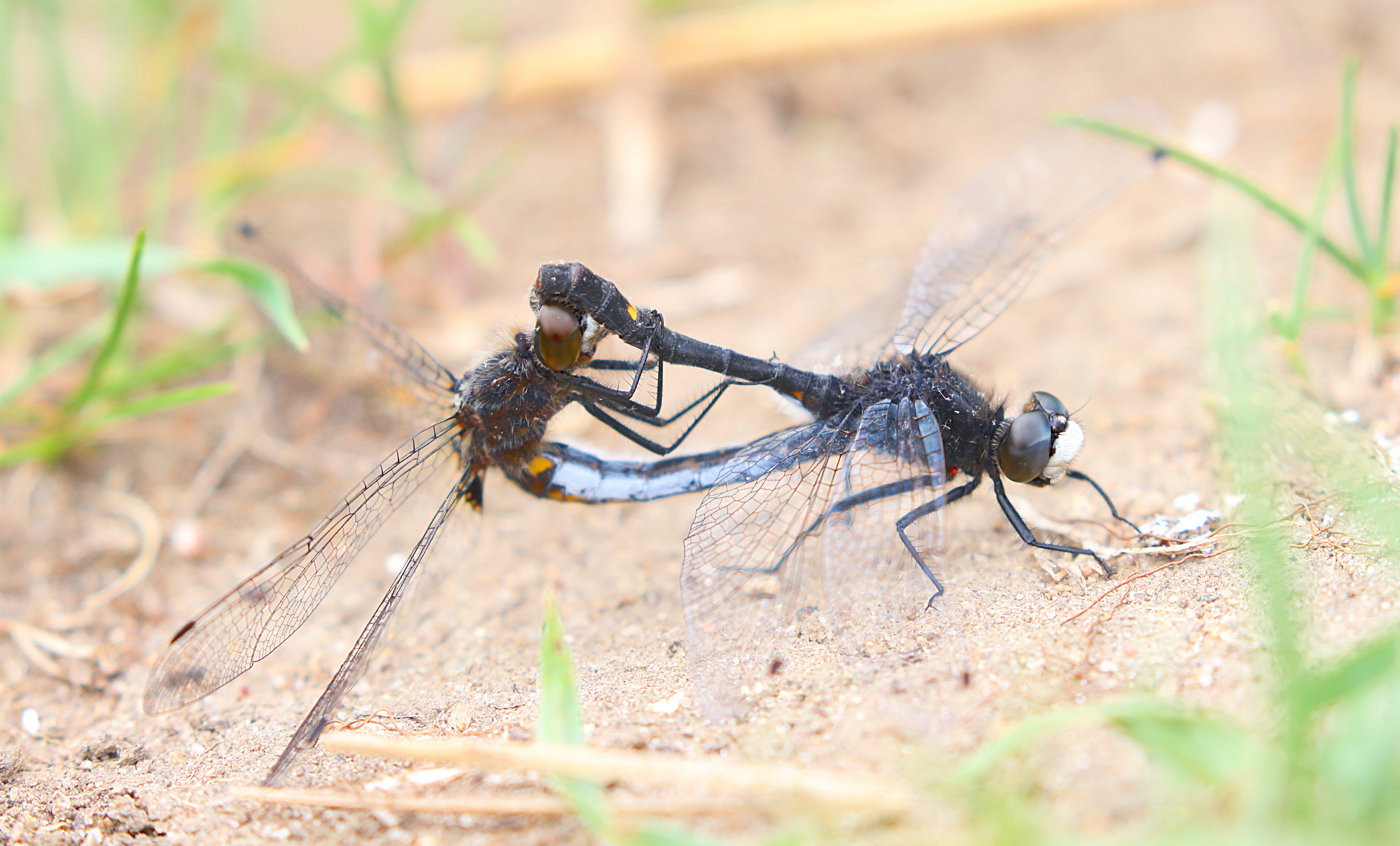 One species that has been rather frustrating for me is the black saddlebags (Tramea lacerata), shown in the next picture. These are reasonably common, but they are a species that flies for very extended periods, and when they do land they usually perch rather high. One can see in the link that other people experience the same issue with them. Hard to get a top view of these things! Different species of dragonflies will be quite different in their flight behavior and in their habits of perching. 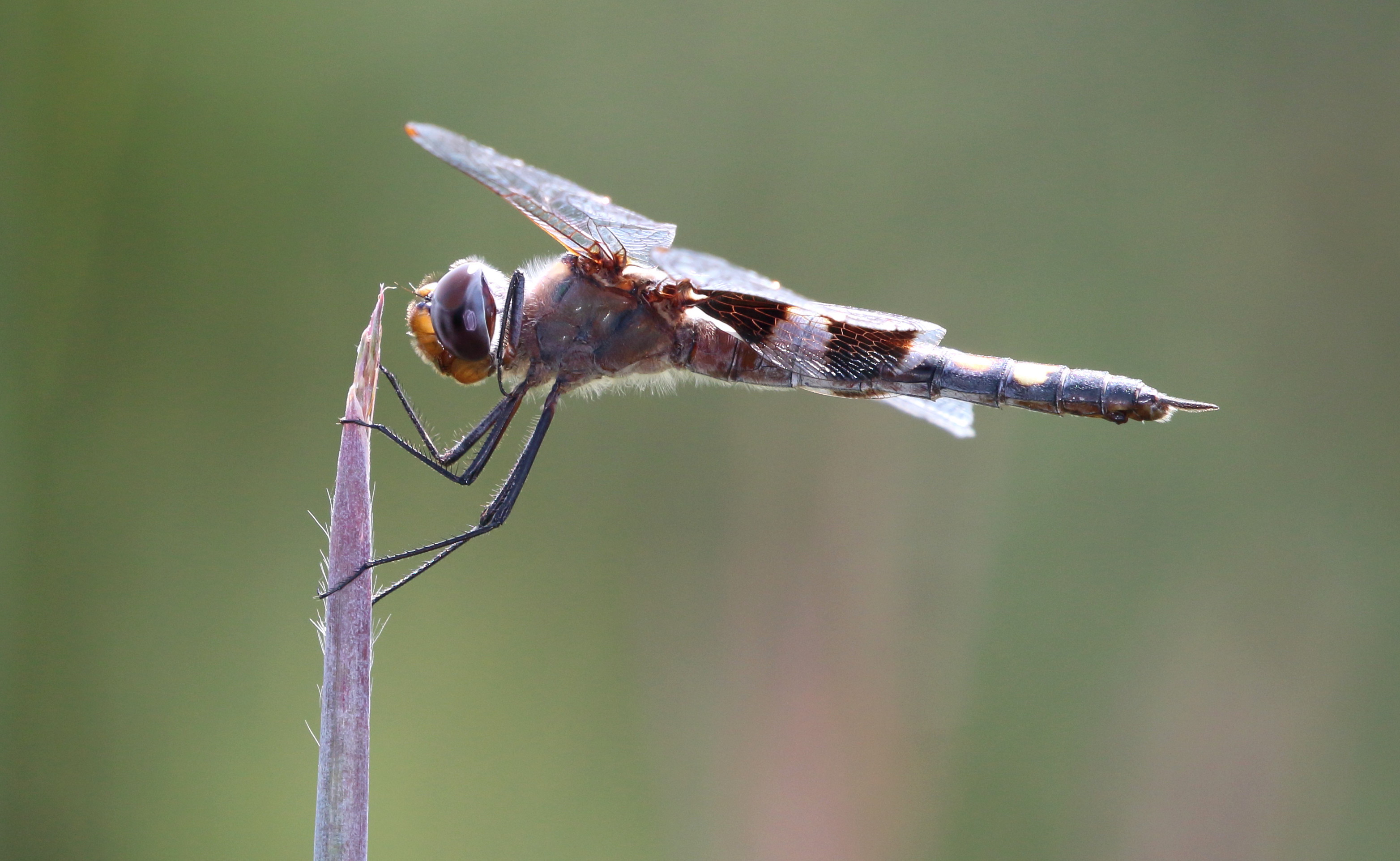 The next dragonfly is a member of a group called the baskettails. This male is probably the common baskettail (Epitheca cynosura), but there are a couple other very similar species in my area. 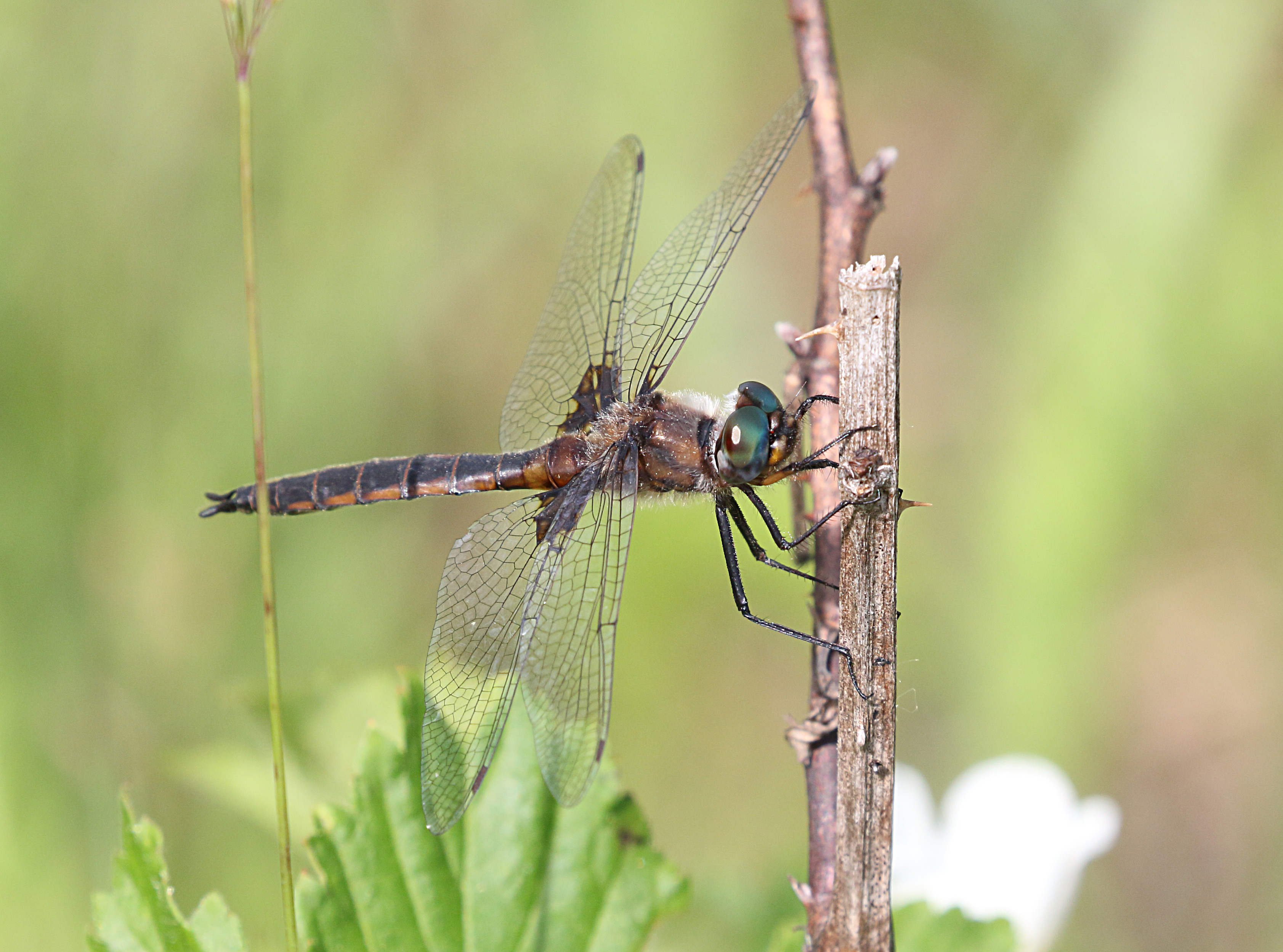 The last pictures are now one of my favorite species of dragonflies, and to think that a year ago I scarcely knew they existed. One day I spotted a large and strange dragonfly hanging in a tree. I assumed it was a 12-spotted skimmer, which is a super common species, but it was the size of a darner and what was going on with its abdomen? Only later from the pictures did I realize this was an entirely new species!

This is the prince baskettail (Epitheca princeps), the largest of our baskettail dragonflies. I later learned that they often perch with their abdomen curled up like this, and they are also considered very difficult to photograph since they spend most of the day in sustained flights well above the trees. In later weeks I discovered they were surprisingly common, and could often be seen in large swarms far over head. I need to look up more often!

On one occasion I was watching one such high-flying group. They were dog-fighting each other and also feeding on the wing, when I noted that they would sometimes swoop down low to my level. So I got my butterfly net and pretty soon I caught one! Now what? I improvised a perch for a staged shot, and used some ice to briefly chill down its thorax. I then posed it for the last picture. It turns out that this is a pretty common practice among those who photograph dragonflies. After a couple minutes it recovered and zoomed away. 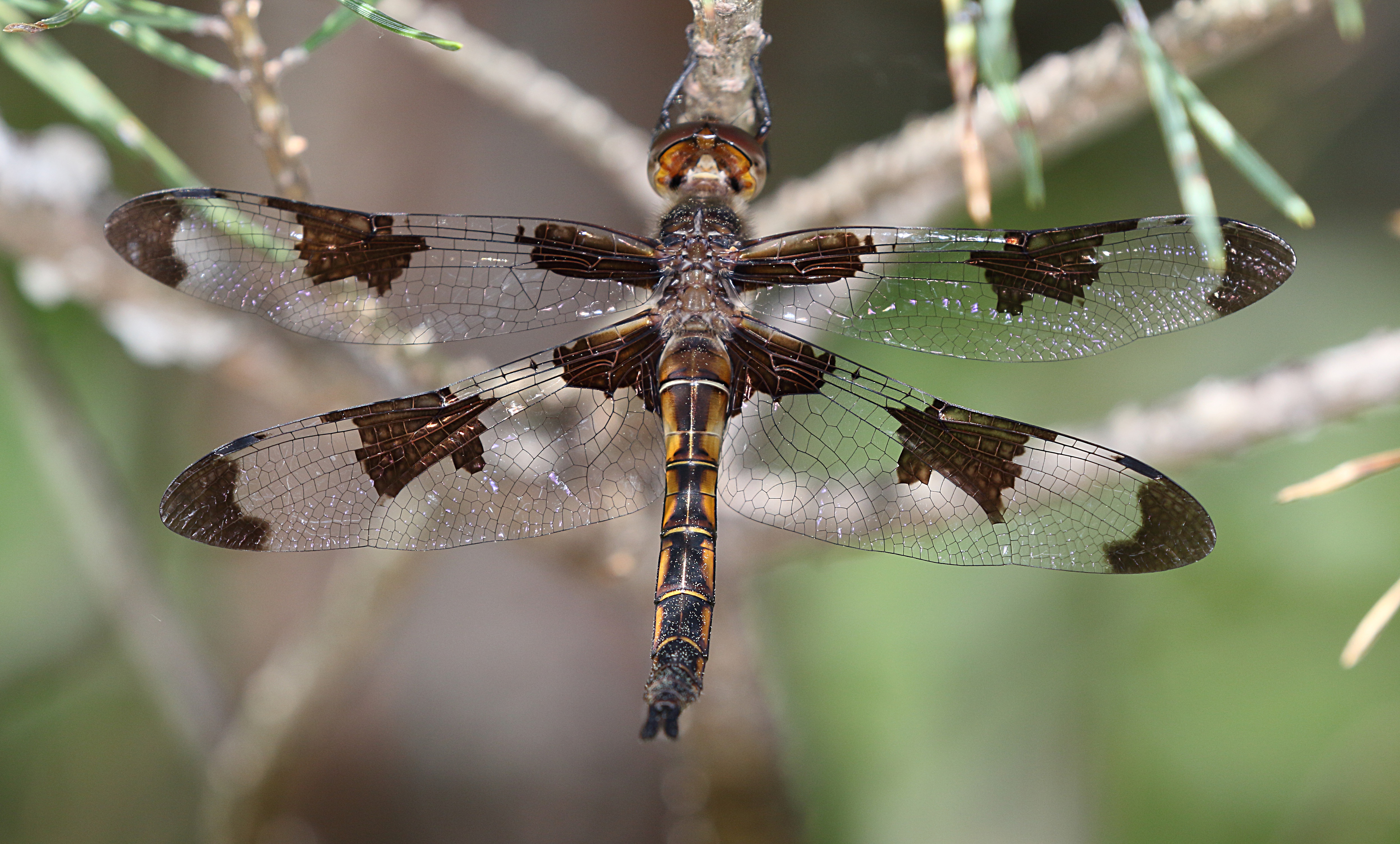 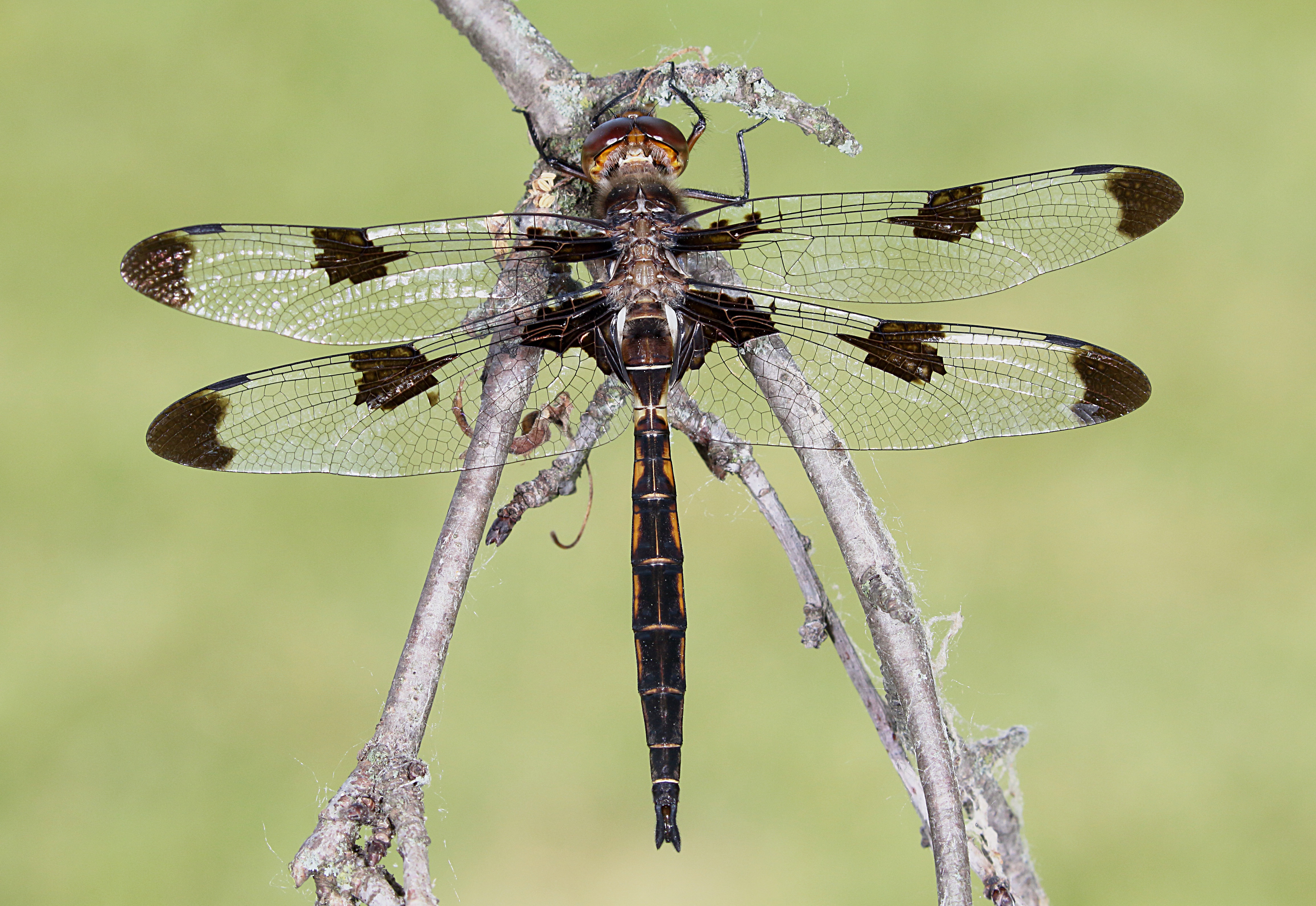 I have now seen probably hundreds of prince baskettails, now that I know something of their ways. It lifts my non-existent spirit to watch them as they cart-wheel away the long summer days, nimbly flying over the trees. Above it all, and (nearly) unattainable.