I’lll be out of the office much of today, so posting will be light. In fact, this may be the only piece of the day. So it goes.

We’ve seen many bogus accusations of cultural appropriation, all meant to lay claim to some item or food or behavior supposedly the property of one “culture” or “ethnic group.” Many of these, like dreadlocks or hoop earrings, are supposedly damaging to the “appropriated” group, but aren’t really. After all, as I’ve said repeatedly, the cross-fertilizations of cultures, whether the appropriation be “up” or “down”, is almost always salubrious. In fact, I can’t think of any examples where it’s been damaging, though I can think of hypothetical examples.

But sometimes the accusations aren’t just misguided, but incorrect. Such is the case of the “nightcap” kerfuffle roiling certain segments of the Internet.  You can read about it at this Today show website (click on screenshot below ), or many other places (e.g., NBC News, CNN, etc.) 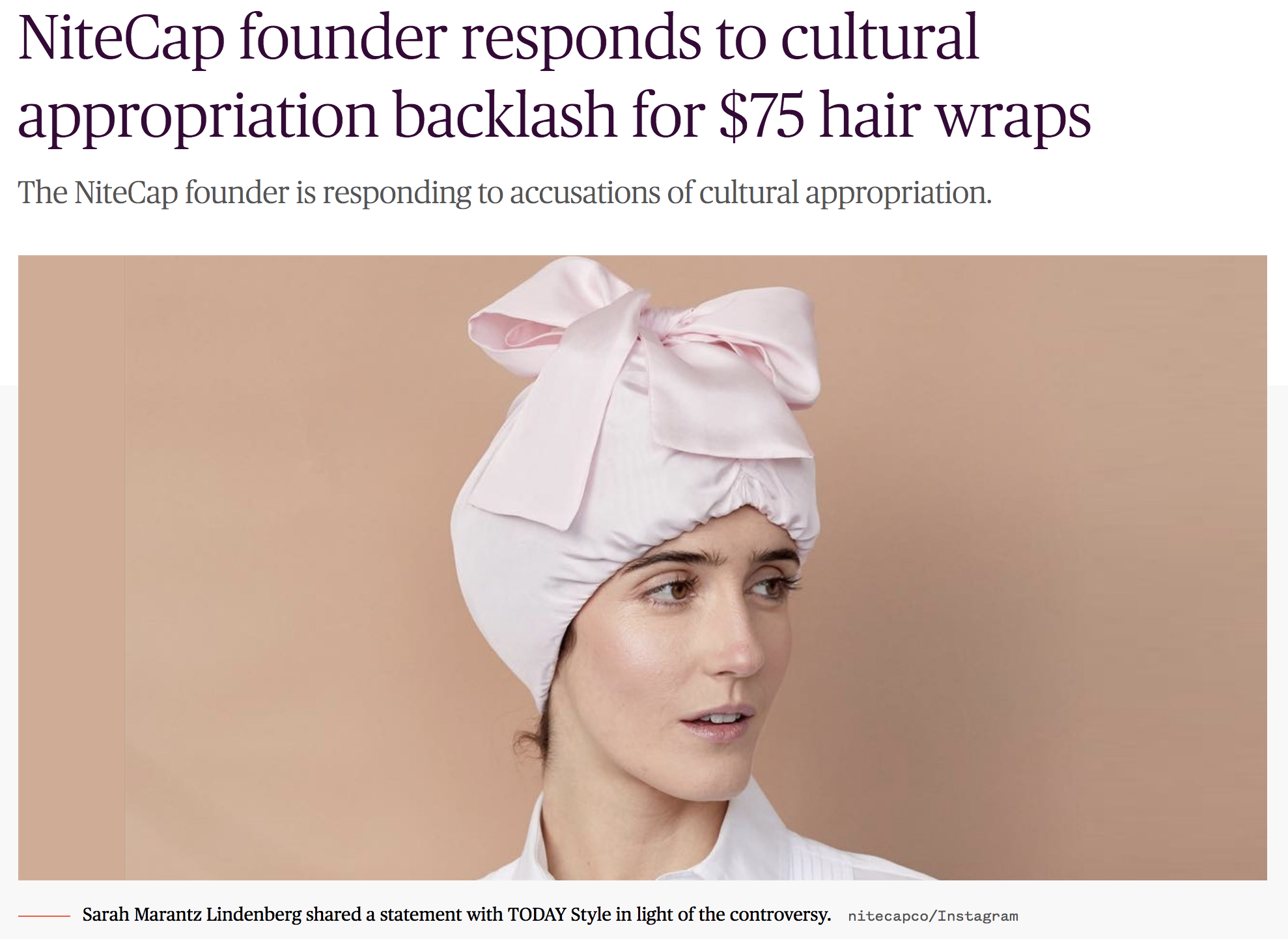 The trouble started when Sarah Marantz Lindenberg (a marketing director) had an interview in Fashion magazine touting her new company’s product, “NiteCap”, a silk head wrap that she designed (and sold for $75) to protect her hair at night. (You can see one above.) Here’s the piece that got Lindenberg in trouble: 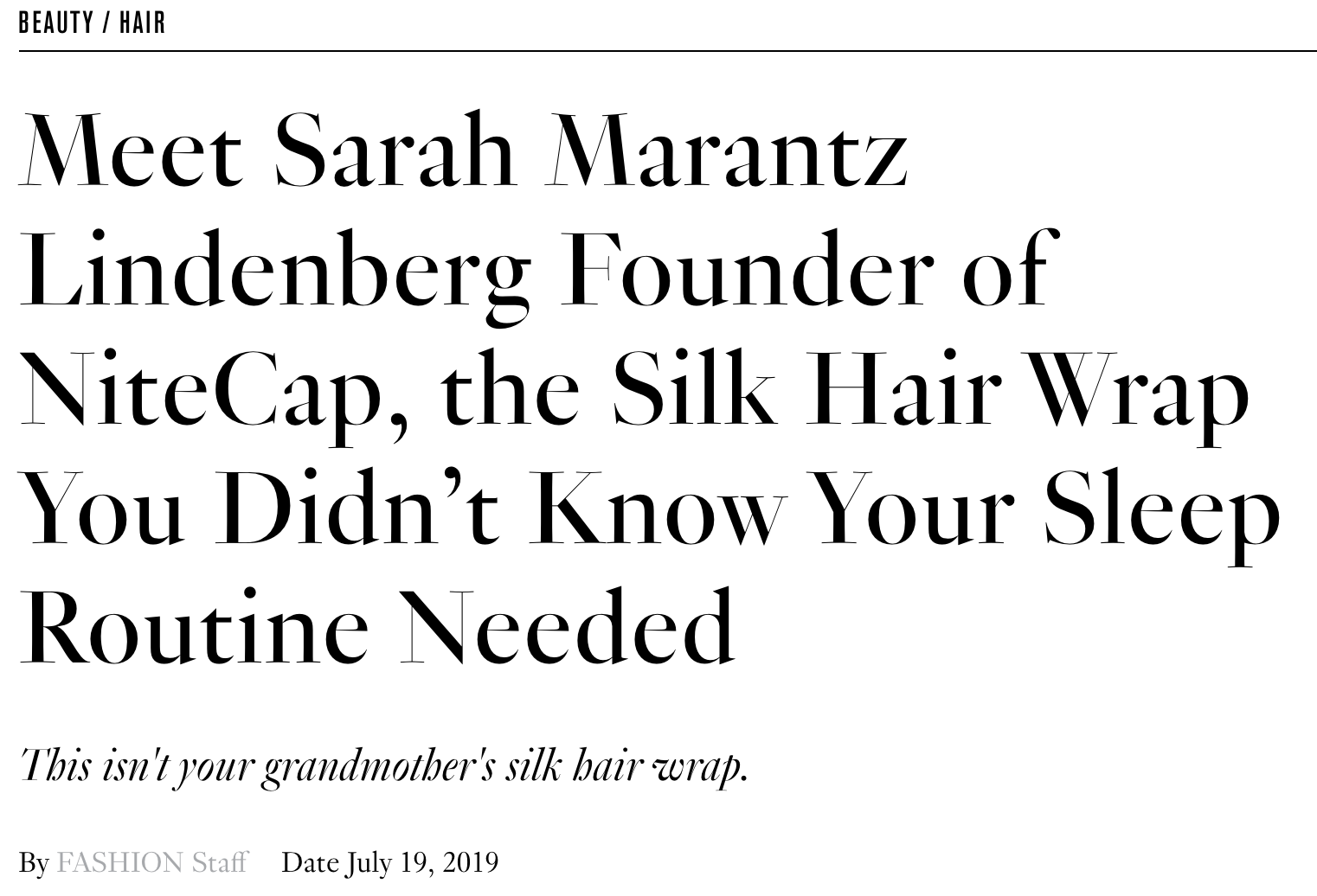 When asked about the product’s genesis, Marantz Lindenberg said this (note that the editors added a coda after publication; I’ve put it in bold).

How did you get the idea for NiteCap?

My concept came out of a problem that needed solving. I was preparing for my wedding and, like a lot of brides, wanted everything to be perfect. My skin was breaking out and I have quite long hair. I like the way it looks the second or third day after washing, so I don’t wash it every day. A dermatologist recommended that I sleep with my hair pulled back. Another physician recommended I try silk scarves, and I had fun playing around with them but they didn’t stay on. I did notice, though, that my skin cleared up from not having my hair on my face. I also noticed that my hair was shinier, thicker, and my blowouts lasted longer. There were products on the market but none of them had a functional and fashionable solution for me—synthetic fabrics that I felt did more damage, or horrible colours that I felt silly going to sleep in. It inspired me to create something of my own. Many people have told me that their grandmothers wrapped their hair, and my aunt recently told me that my great-grandmother wrapped her rollers in toilet paper after it was all styled and set. That was a lot less glamorous than my product, but the practice has been around a long time. (Editor’s note: Though not strictly used just for sleeping, the item has a long history in black hair culture.)

Well, the item has a long history, period—a history preceding the use of “sleep bonnets” by blacks (see below). But somehow her marketing of the silk headwrap got people ticked off, who then claimed that it was either a cultural appropriation of night bonnets (or day bonnets) worn by African-Americans, or perhaps that Marantz Lindenberg failed to acknowledge the African-American history. And so she got, as they say, “dragged” on Twitter. And then the media, hungry for stories, simply put the Twitter pushback together into an article, like the one at the top. Here’s some of that pushback.

Howard University communications and culture professor Tia Tyree told NBC News that the African American community has touted the benefits of hair wraps for quite some time.

“In understanding or hearing her story, it’s amazing to me that her product was precipitated on an invention that came from a once-in-a-lifetime problem,” Tyree said. “The benefits of hair wraps have been known for generations, so for anyone to market their product in a way that appeals to individuals as if this is a new idea is simply unacceptable because it negates the fact that African American women have had and used this product for decades.”

But Marantz Lindenberg said that the idea and practice has been around for a long time. When you see the word “negates” or “erasure”, more often than not it means “they didn’t mention my group.”

“The problem is not that the founder is selling them. The problem is, she seems to be claiming ownership over something that’s been around for generations,” said Grace Eleyae, who runs an online business selling modern takes on traditional satin nightcaps. Her products range from $10 to $50.
Silk and satin are great for hair and skin, and you don’t have to be black to use them, Eleyae said.
But the interview and the products involve what she called “elements of misappropriation,” with Marantz Lindenberg taking elements from a different culture without any mention of it.

. . .When she heard about NiteCap, Suneye Rae Holmes, an economics professor at historically black Spelman College, thought it was funny — that this product, found for just a few bucks at corner stores, could be sold for so much.But price aside, she said, the products and the controversy surrounding them follow history.

“As an economist and a black woman, I don’t think there’s anything new here, but it is interesting to see how it reincarnates itself as time goes on,” she said. “But there’s a lot of similarities from other examples that we’ve seen from history in which the ideas are there.”

Holmes doesn’t blame Marantz Lindenberg as much as she blames the structural inequalities of capitalism. But she notes that Marantz Lindenberg is perhaps benefiting from her position — her access to capital, suppliers and connections — that have historically been and continue to be denied to marginalized groups.

Is that some violation of protocol; to benefit from one’s position and connections? And if you do, what are you supposed to do about it?

And of course the inevitable tweetstorm ensued:

Please stop appropriating everything from Black people, pretending you invented it, then charging tons of money for it. Those are sleep bonnets, and they’ve been available in every beauty supply store since forever.

Seriously, as a white woman with curly hair and the internet, I can say with 100% confidence that there is NO WAY she did not know about bonnets, and that they were invented by Black women.

Oh Canada. Still praising Christopher Columbuses? Still sweeping stuff under the rug? Anyone can turn the corner and give a small business owner their money at a beauty supply store for a BONNET. So many eyes saw this article. This isn't groundbreaking. This is erasure. Do better

This is straight up FOOLISHNESS! Now that a white woman is marketing something black woman have worn (and perfected) for at least ALL MY 46 YEARS, it's a THING? GTFOH!

It didn’t matter that Marantz Lindenberg runs a small company that tries to employ women, guarantees good employment conditions, and tries to use sustainable methods of production. Those are good, but apparently not enough:

In a statement to TODAY Style, Marantz Lindenberg said the following: “Hair wrapping and sleep bonnets have been used for centuries and I have never once claimed to have invented or come up with the concept, despite many stories and posts misquoting me. I introduced my version because I was unable to find a product on the market that worked for me — made locally and sustainably and from natural materials.”

She also addressed concerns over the price: “The actual price of a NiteCap is $75 USD (the website is listed in Canadian dollars). The price point is such because it is made from 2 yards of 100% natural silk and creates minimal waste through a sustainable production process locally in Canada. We are also committed to supporting fair pay, worker safety and employ a female-owned and operated manufacturing facility.”

There are two problems here. First, the nightcap wasn’t designed or popularized by African-Americans: it has a long history in Europe, as noted by Wikipedia.  Perhaps in modern times it’s worn largely by African-Americans, or Africans, but I can’t speak to that. All I know is that Marantz Lindenberg doesn’t seem to have committed conscious theft of a design, and is fully aware that “the practice has been around long before her time.” Not good enough!!!!  She apparently has to acknowledge that the practice was adopted by African-American women—although before that it was used by European women.

Here’s a day bonnet, protecting the hair, from 1665. You’ve seen this, of course: 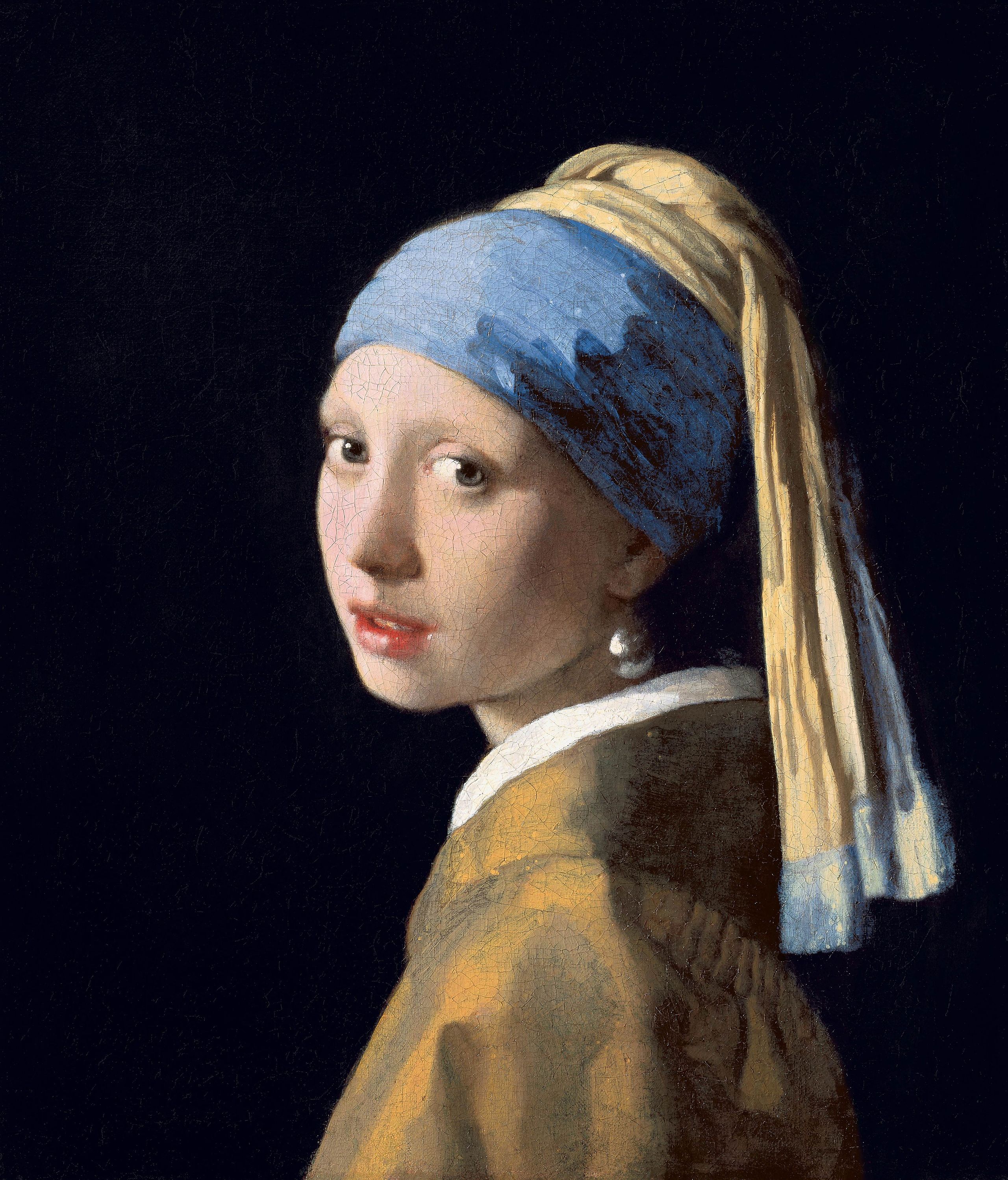 Nightcaps or sleeping caps were worn while sleeping to keep the hair tangle-free and – especially silk nightcaps – to make the hair glossy. Nightcaps have a long history and even today silk caps are recommended for long or curly hair. Read on to find out why and how Edwardian and WW1 women wore nightcaps and how to make a vintage silk sleeping cap for yourself!

Some examples from that piece: 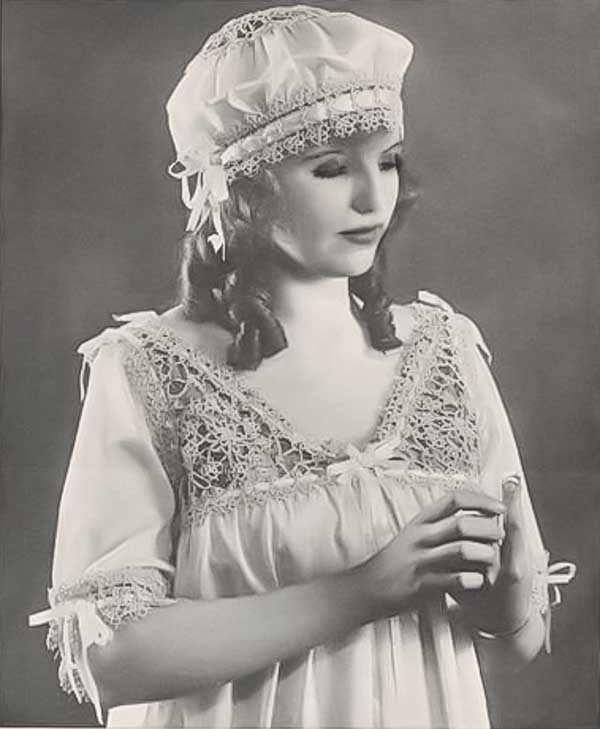 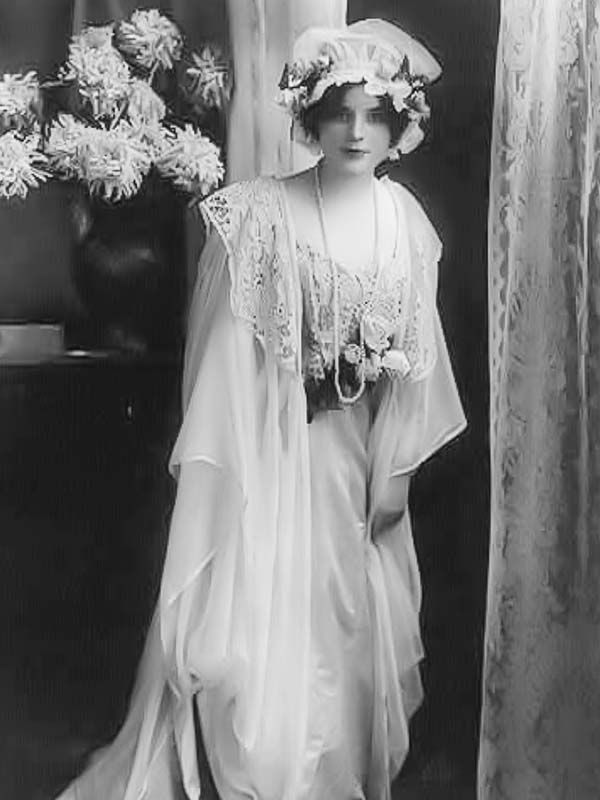 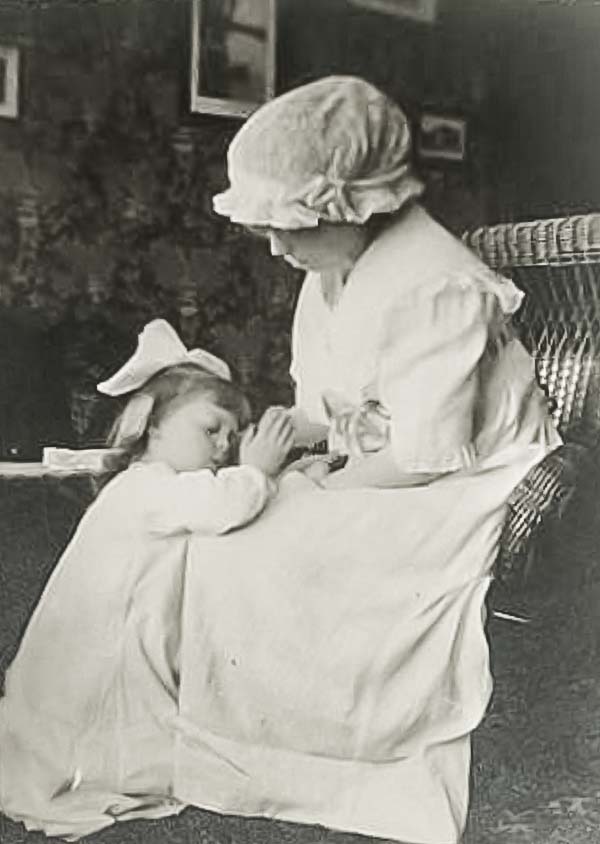 Were these appropriated from African-Americans, or Africans? I doubt it.

But who cares who invented it In fact, it was probably “invented” several times over as women discovered that wrapping your hair helped keep it neat and tidy.

The main question, though, is this: was damage done to the African-American community by Mantz Lindenberg’s silk headwrap?  And, as usual with these things, the answer is “no”. The only “damage” done was to the feelings of people who thought that the head bonnet was theirs, and that nobody can use it without acknowledging one group who uses it, and probably discuss the history of oppression of blacks in America. This is the same story we hear over and over again: with the kimono at Boston’s Museum of Fine Arts, with General Tso’s chicken at Oberlin, with whites wearing dreadlocks or hoop earrings, and so on. In no case was palpable harm done to the minority groups.

Nevertheless, Marantz Lindenberg issued the obligatory apology on Instagram, and Fashion Magazine also added it to the head of their interview with the note: “Editor’s note: we wanted to update this story with the Instagram post from Sarah Marantz Lindenberg from NiteCap.” 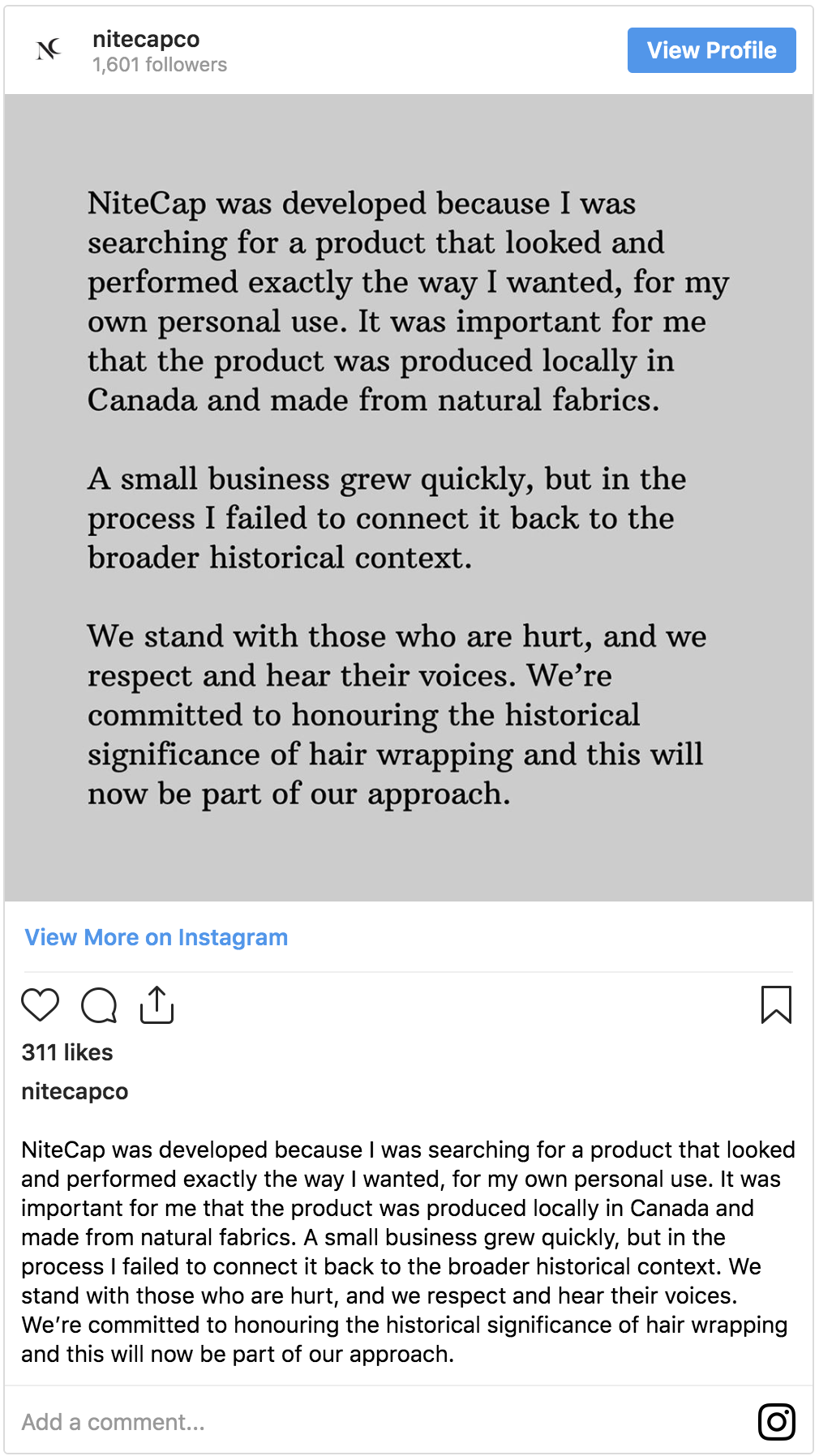 So the Woke humiliate those who have violated their canons of purity. It would be interesting to analyze the psychology behind this kind of outrage, but I must pass on to other matters.