We all know that “In God We Trust” is the U.S. national motto, though the unofficial motto—a much better one—is E pluribus unum (“Out of many, one”). The former is divisive, the latter unifying. The change in mottos was made in 1956, during the Cold War, and was largely a response to “godless Communism”: an American affirmation of “See, we’re better than you are!” The motto bill was passed by both houses of Congress and signed into law on the same day by President Eisenhower.

Of course this motto violates the First Amendment, as it’s a government endorsement of religion over nonreligion, but, as Andrew Seidel recounts in his book The Founding Myth, the courts have been weaselly about this, interpreting this kind of breach as “not religious” and “part of tradition”. But I have little doubt that founders like Madison and Jefferson would never have approved of such a motto.

I’m not sure exactly why the forces of Christianity are trying to push this kind of stuff on us more than ever. Perhaps it’s a desperate response to the increasing secularization of America.  And so “In God We Trust” bills are passing in various states. The latest is in South Dakota, where, according to multiple sources (e.g., CNN and ThinkProgress), students returning to public schools this year will be greeted by the results of a new law: a required public display of “In God We Trust”. And it has to be “prominent”, like this stencil on a wall at South Park Elementary in Rapid, City, South Dakota (photograph from 6 days ago). I find this dictatorial and ridiculous: something out of Nineteen Eighty-Four (just substitute “Big Brother” for “God”).

The law takes effect this month. As CNN notes:

A bill signed by Gov. Kristi Noem mandates that the words be on display for students to see beginning in the 2019-2020 school year.

The display can be on anything the principal feels is appropriate for their school, like a plaque or student artwork.

But there are requirements. The display must be at least 12 inches square and must be in a prominent location.

“A prominent location is a school entryway, cafeteria, or other common area where students are most likely to see the national motto display,” the bill said.

Here’s most of the bill; note that, anticipating lawsuits, display of the bill will be defended by the state at no charge to the school or school district, though it’s not clear where the money will come from. (Click on the screenshot to get a pdf of the full bill). 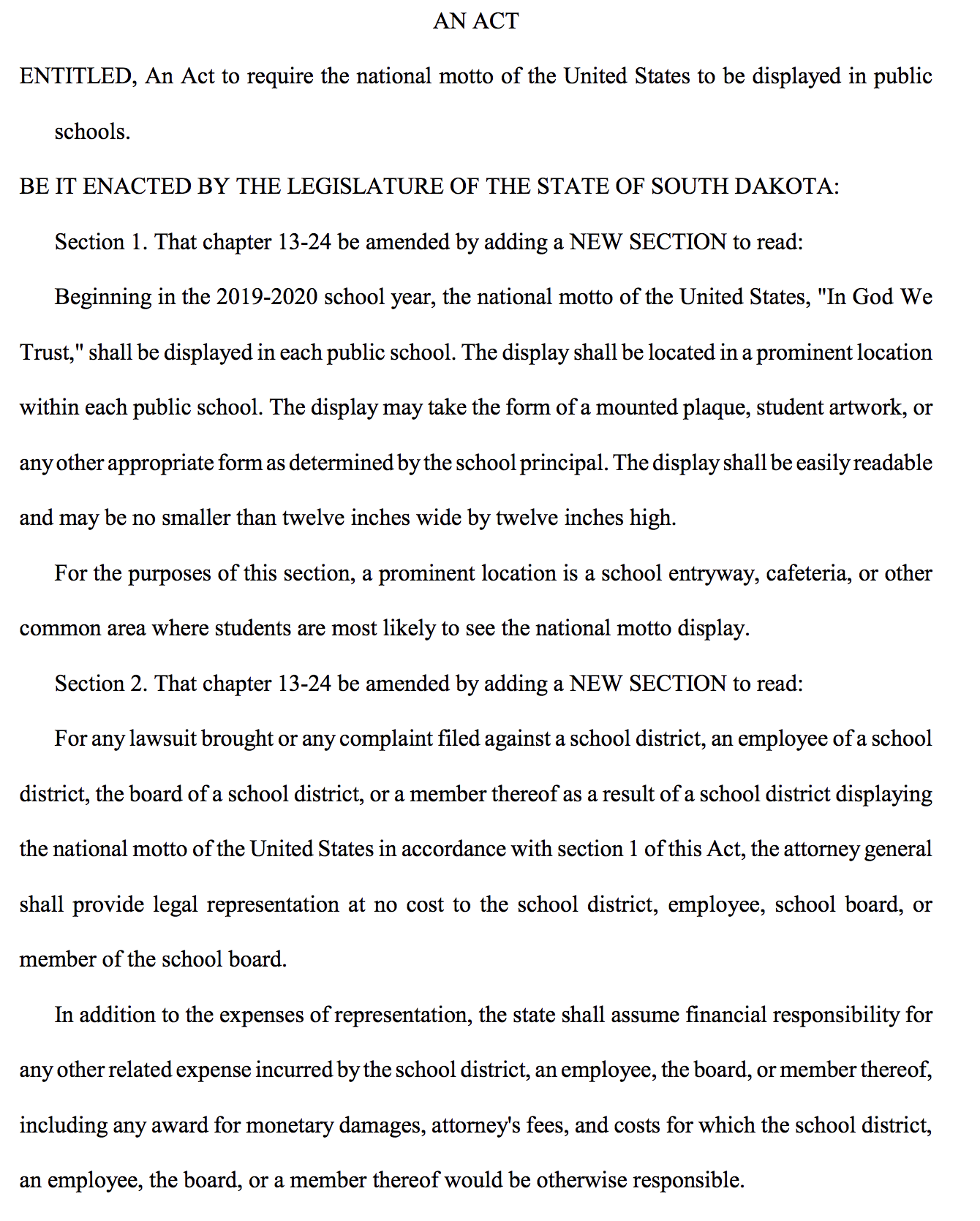 There are some savvy students there, though their attempt to modify the bill failed miserably (from CNN):

Lawmakers have heard concerns that displaying the motto may alienate students of non-Christian backgrounds.

A group of Stevens High School students in Rapid City spoke to their school board to propose a modification to the sign that would include mention of science, Allah, Yahweh, the Spirits, Buddah, Brahman and “ourselves” in addition to God, according to CNN affiliate KOTA TV.

“I think that’s a really foundational element of American society is that we are a cultural melting pot and it is really important that we make all people who come to America to feel welcome and to be more in accordance with the First Amendment since we all have the freedom of religion,” student Abigail Ryan told KOTA TV.

The board heard the opinion but took no action, the station said.

Only one Democratic state senator voted in favor of the bill.

During the 2019-2020 school year, all South Dakota public schools will have to display the “In God We trust” in a “prominent location” and the words “may be no smaller than twelve inches wide by twelve inches wide.” Prominent location is defined as a school cafeteria, school entryway, or other common area. The law also requires that the attorney general provides legal representation at no cost to the district, employee, school board, or member of the school board and that the state will financial responsibility for any monetary damages, attorney’s fees, and other costs.

This bill is part of a national movement, too:

This will clearly go to the Supreme Court, and it’s pretty certain they will declare it constitutional. After all, if every $1 bill the kids have carries “In God We Trust” on it, and that’s legal, why not in the schools?  But we can be sure that there will be challenges. The Freedom from Religion Foundation, for instance, has correctly deemed the law “exclusionary”, and adds this in a bulletin (my emphasis):

“The Freedom From Religion Foundation, based in Madison, Wis., which has legally challenged the motto’s inclusion on U.S. currency, alerted its South Dakota members to contact their legislators to express opposition to the law,” AP reports. [JAC: this bulletin was issued four days ago, though the law passed in March.]

FFRF Co-President Annie Laurie Gaylor told AP: “Our position is that it’s a terrible violation of freedom of conscience to inflict a godly message on a captive audience of schoolchildren.”

“In God We Trust” was belatedly adopted as a motto when President Eisenhower signed legislation at the behest of the Knights of Columbus and other religious entities, which undertook a national lobbying campaign during the height of 1950s zealotry. The original inclusionary U.S. motto, chosen by a distinguished committee of Jefferson, Franklin and Adams, is the Latin E Pluribus Unum (From Many, [Come] One). As FFRF principal founder Anne Gaylor always pointed out, the religious motto isn’t even correct: “To be accurate it would have to read ‘In God Some of Us Trust,’ and wouldn’t that be silly?”

Anne Gaylor’s remark is more apt now than ever. The nonreligious segment of the U.S. population is currently the largest “denomination,” surpassing Roman Catholics at almost 24 percent of the populace. One-third of Millennials are “Nones,” and one-fifth of Gen Z explicitly identifies as atheist or agnostic. A large portion of the schoolchildren in South Dakota belong to Gen Z — and with the required display of an explicitly religious motto, religion is being imposed on the freethinkers among them.

It really is a violation of the First Amendment to force American kids to confront a motto that many of them don’t accept. If the courts let this stand, it will represent a further erosion of the wall between church and state. These laws are travesties, but show the desperation of the faithful who, in a climate of increasing secularism, need to force their own religion down the throats of children—in schools that are an arm of the U.S. government.

I know we have readers in South Dakota, so weigh in below. Are you people doing anything about this?