In a poll of Americans’ religious knowledge reported this week by Pew, two things were revealed. First, most Americans don’t know much about religion—either theirs or that of other believers. Second, it is the atheists, agnostics, and Jews who rank highest on religious knowledge.

You can read the long report, which gives the 32 questions, by clicking on the first screenshot below. But before you do that, take a 15-question quiz (apparently an abbreviated version of what Pew asked people) by clicking on the second screenshot. Do it! You know you want to!

Pew asked 10,971 people, selected, as usual, from landline and cellphone numbers dialed randomly, and state that the “margin of sampling error” (presumably the standard error of the mean) is “plus or minus 1.5 percentage points”. Now, click on the second screenshot that says “Before you read the report”, and then on the brown “next” bar to see how much you know about religion. 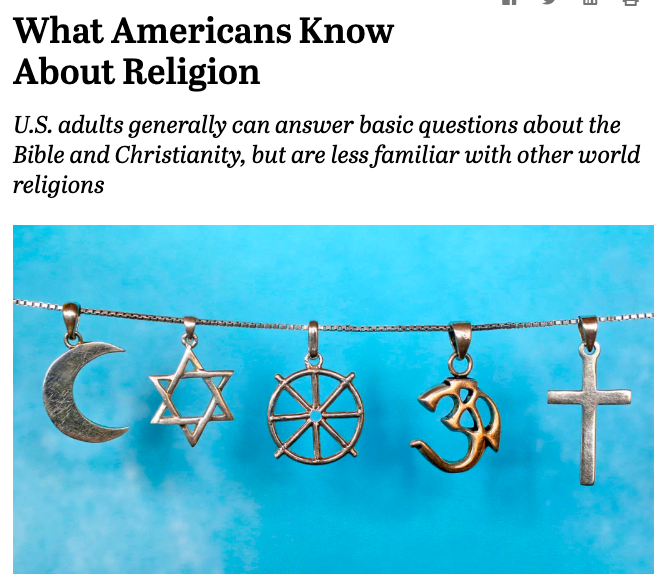 First, some braggadocio: I aced the test. Here are my results:

But is that surprising? After all, among all respondents, Jews answered the most questions correctly (18.7 out of 32) and atheists the next most (17.9/32); see below. As an atheist Jew, I was ideally positioned to know about religion—and I wrote a book about science and faith that involved reading a lot about religion, including plowing through the Bible and the Qur’an (the Book of Mormon defeated me). Report your results below, and be honest!

Now, you’re allowed to go back to the first link and see all the questions, and how people did.

As you see from the mini-quiz above, the average number of questions answered by Americans was about half: 7.4 out of 15. In the overall survey, the mean number of questions answered was 14 out of 32. Here’s how the different groups did. Note that “nothing in particular” (which I suppose are the “nones” who don’t say they are atheists are agnostics, scored below the mean, as did the “historically black Protestants,” who got fewer than a third of the questions right:

FiveThirtyEight has a useful summary of the main results (this is a direct quote):

I’ll add to that a few more tidbits:

a.) The amount of education you have is strongly associated with how well you answered the questions. That’s not surprising, as general education, even if not religious, exposes you to what different faiths believe. And if you’ve taken a world religions class, you do better than if you didn’t, though not as well as general college graduates. Here are the Pew figures: 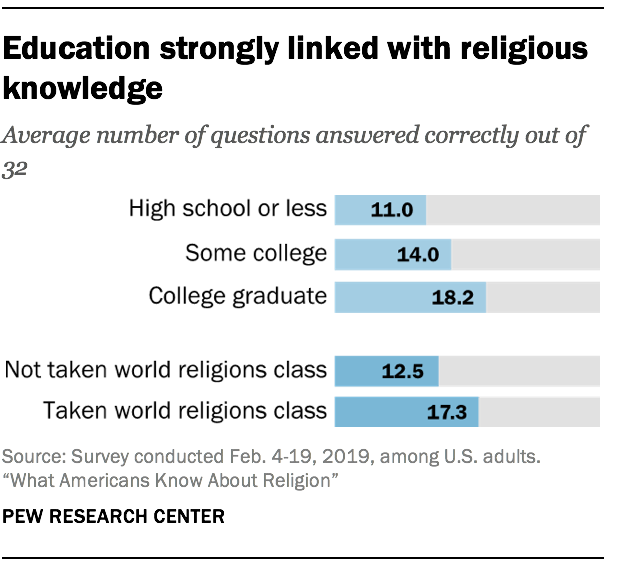 b.) Catholics don’t know important dictates of their own faiths.  Pew says this:

Half of Catholics in the United States (50%) correctly answer a question about official church teachings on transubstantiation – that during Communion, the bread and wine actually become the body and blood of Christ. The other half of Catholics incorrectly say the church teaches that the bread and wine used in Communion are just symbols of the body and blood of Christ (45%) or say they are not sure (4%).

Lordy, isn’t that something that all of us know? It’s not a damn metaphor! (But DNA and protein tests can’t be used to test it.)

Just one-in-five Americans (20%) know that Protestantism traditionally teaches that salvation comes through faith alone, a key theological issue in the Protestant Reformation.  One-in-ten incorrectly believe that Catholicism teaches that salvation comes through faith alone, while the remainder of adults declined to offer a response in the survey (38%) or wrongly state that both Protestantism and Catholicism teach this (23%) or that neither Christian tradition teaches this (8%). Evangelical Protestants are more likely than other groups to know the traditional Protestant teaching, though even among evangelicals, far fewer than half (37%) answer the question correctly.

Well, I’m sure some of you will be thinking that atheists did well because they really knew about the doctrines of the faiths they rejected. But that can’t be the whole story, as the questions are about many beliefs: those of Catholics, Jews, Sikhs, Hindus, Buddhists, and so on. I suspect that atheists are generally better educated than the average American, though that may be wishful thinking. Also, the Jews did better than the atheists, though I suspect that most American Jews (like me) really are atheists, despite the claims of people like Dave Silverman that atheists can’t say they’re Jews. (Of course many of us do.) Again, I suspect that Jews are better educated than the general population.

But here’s hoping that you readers will take the 15-question quiz and report your scores below. I’ll take an average and standard error after people weigh in. And then be sure to look at all 32 questions given in the long-form Pew report.

Go to it! Who can resist a quiz, especially one on religion?

302 thoughts on “Pew: Americans know bupkes about religion (and test yourself)”