There’s a new paper in Current Biology that details the finding of a very unusual bird in Burmese amber—a bird with one huge toe and weird bristles on its feet. You can read it with UnPaywall by clicking on the screenshot below (pdf here, reference at bottom).

The specimen, uncovered by amber miners five years ago, consists of a lower right leg and foot, as well as some feathers (both those attached to the leg and flight feathers free in the amber). It dates back about 99 million years, to the middle Cretaceous, when flying birds had already evolved from reptiles. Since it was a new species (the first ever described from amber), the authors gave it the binomial Elektorornis chenguangi, with the genus name meaning “amber bird”.  Phylogenetic analysis places the species in the Enantiornithes, a bird family that went extinct without descendants at the K/T boundary—about 66 million years ago when the dinosaurs also began to die out. (All modern birds belong to the clade Neornithes, a group within the subclass Aves.)

Briefly, there are two remarkable features of this bird—features that may be connected.

The first is that the third digit on the foot is much longer than the second and fourth digits: about 41% longer. It’s also more curved than the other toes. That disproportionality is unique among all known birds, living or extinct. (The specimen was at first thought to belong to an extinct lizard, but it was immediately clear to experts that this was a bird.)

You can see the long claw in the Figure below, both to the left and in the drawing in the center. On the right you can see the second unusual feature: the scutellae scale filaments (SSFs), bristly feathers on the feet and legs.

The authors conclude that the configuration of the foot itself indicates that it was a perching (“arboreal”) bird. But what about that toe? When I first saw the figure, I thought the toe must have been for extracting prey (probably insects) from bark and tree holes, sort of like what the aye-aye (Daubentonia madagascariensis—a bizarre lemur with an elongated digit—does. And the possible sensory nature of the foot bristles would help with that task. Great minds think alike, for that is the authors’ own suggestion.

The figure below is of lesser interest to us; it shows some of the flight feathers from the wing that were also preserved in the amber. What is most important is that the feathers are asymmetrical, with the leading filaments (“vanes”) being less than half as long as the trailing filaments. That is an indication of flight, as shown in these modern bird feathers from Quora, which also explains the aerodynamic reason for the asymmetry. 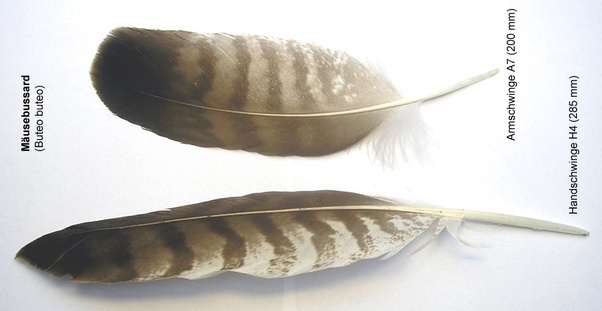 Here’s a figure showing the feathers, which still bear brown pigmentation in the amber:

The authors are a bit waffle-y about this third toe, saying “the function of the elongated third toes is uncertain”. And indeed, it is uncertain. But in the abstract they are a bit more certain, saying “we suggest that the elongated third digit was employed in a unique foraging strategy,” i.e., extracting food (probably insects) from trees. And, given the presence of what are likely sensory bristles on the toes, similar to sensory bristles around the mouths in some New Zealand birds, including the kiwi, that makes sense. Here are the sensory bristles on a kiwi’s face, which undoubtedly help it forage and navigate at night, since the species are nocturnal:

Here, for comparison with the new bird, is the thin but long middle finger of an aye-aye:

Finally, here’s an aye-aye using its elongated finger to probe for insects. (That finger has a ball and socket joint and can swivel 360°.) I suspect that Elektorornis chenguangi did a similar thing.

Will we ever know? I don’t see how, but speculation is fun, and may lead to some testable predictions.

16 thoughts on “An ancient bird with an extraordinarily long toe”