According to his website, two days ago U.S. Senator Steve Danes of Montana (a Republican, of course) introduced not a law, but a proposal for a Constitutional amendment to allow congress to prohibit the burning of the U.S. Flag. It was co-sponsored by U.S. Senators John Cornyn (R-TX), Johnny Isakson (R-GA), Mike Crapo (R-ID), Lindsey Graham (R-SC), Dean Heller (R-NV), Chuck Grassley (R-IA) and Orrin Hatch (R-UT).  Not a Democrat in the lot, and that’s no surprise.

Here’s the text of the amendment (full pdf here): 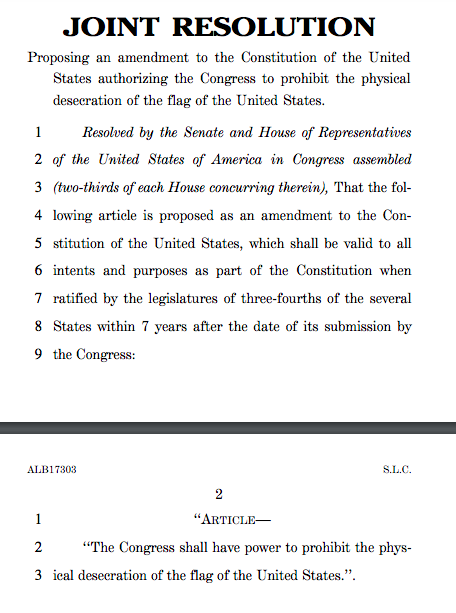 Wikipedia recounts the failed history of legislation to prohibit the burning of flags, beginning in 1968 when, as I remember well, protestors against the Vietnam War engaged in frequent flag-burnings. Then Congress passed a “flag protection act,” as did 48 of the 50 states, but the federal law was overturned by the U.S. Supreme Court. It was a narrow vote—5-4—by a liberal court, but was decided on First Amendment grounds, with flag-burning construed as protected speech. As Wikipedia notes:

The decisions were controversial and have prompted Congress to consider the only remaining legal avenue to enact flag protection statutes—a constitutional amendment. Each Congress since the Johnson decision has considered creating a flag desecration amendment. From 1995 to 2005, beginning with the 104th Congress, the proposed amendment was approved biennially by the two-thirds majority necessary in the U.S. House of Representatives, but it consistently failed to achieve the same constitutionally-required super-majority vote in the U.S. Senate. During some sessions, the proposed amendment did not even come to a vote in the Senate before the expiration of the Congress’ term. The last time it was considered, in the 109th Congress, the Amendment failed by one vote in the Senate. Some Senate Republican aides indicated that almost a dozen of the Republican senators who voted for the amendment were privately opposed to it, and they believed that these senators would have voted to defeat the amendment if required

Now, of course, we have a much more conservative Supreme Court, but before the Court could even take up this case, a flag-burning Constitutional Amendment would have to become law, which means that beyond a 2/3 affirmative vote in both houses of Congress, it would then have to be ratified by 3/4 of the states.

That would take time, and it’s pretty clear that this amendment is just virtue-signaling (Wikipedia says that in the 2005-2007 Congress, “almost a dozen of the Republican senators who voted for the amendment were privately opposed to it”). It’s also clear that this really is a form of political expression and, so long as nobody gets burned or no other property is damaged, it’s the kind of speech that the First Amendment is designed to protect. Let us hope that this one, like all the others, will fail. 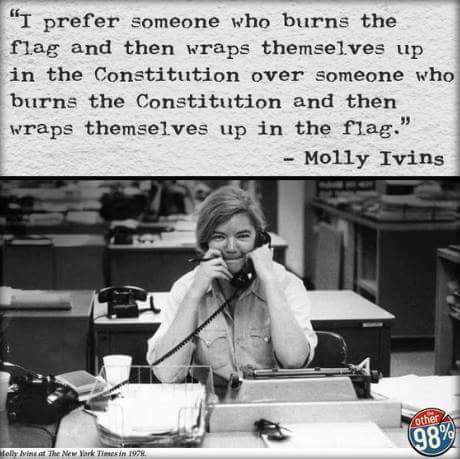 51 thoughts on “Bad idea of the year: Constitutional amendment to prohibit flag burning”