Bring out your wildlife photos (good ones, mind you); I can never have enough of them on hand.

Today have another slew of great insect photos, with documentation, by Mark Sturtevant. His notes are indented.

Here are yet more pictures of insects taken over the previous summer.

The first two pictures show adult luna moths (Actias luna) that were purchased as cocoons the previous winter. Folks here may remember my previous post showing expansion of the wings from one of the emerging moths. The first of the new pictures below shows a recently emerged male, then a female, followed by an intimate close up. Taking pictures of giant silk moths like these is best done when they have recently finished expanding their wings but are not yet inclined to fly. Once they get the urge to fly, their activities cause them to lose lots of scales very quickly. As it happened, the male lunas that emerged were coming out when I was not on hand to get pictures during the quiet period, save for this single male. But this male had a wing that did not expand completely, so the first picture is a combination of two pictures of the same moth, taken under different angles of lighting. I then digitally replaced the ‘bad’ wing with a ‘good’ wing. 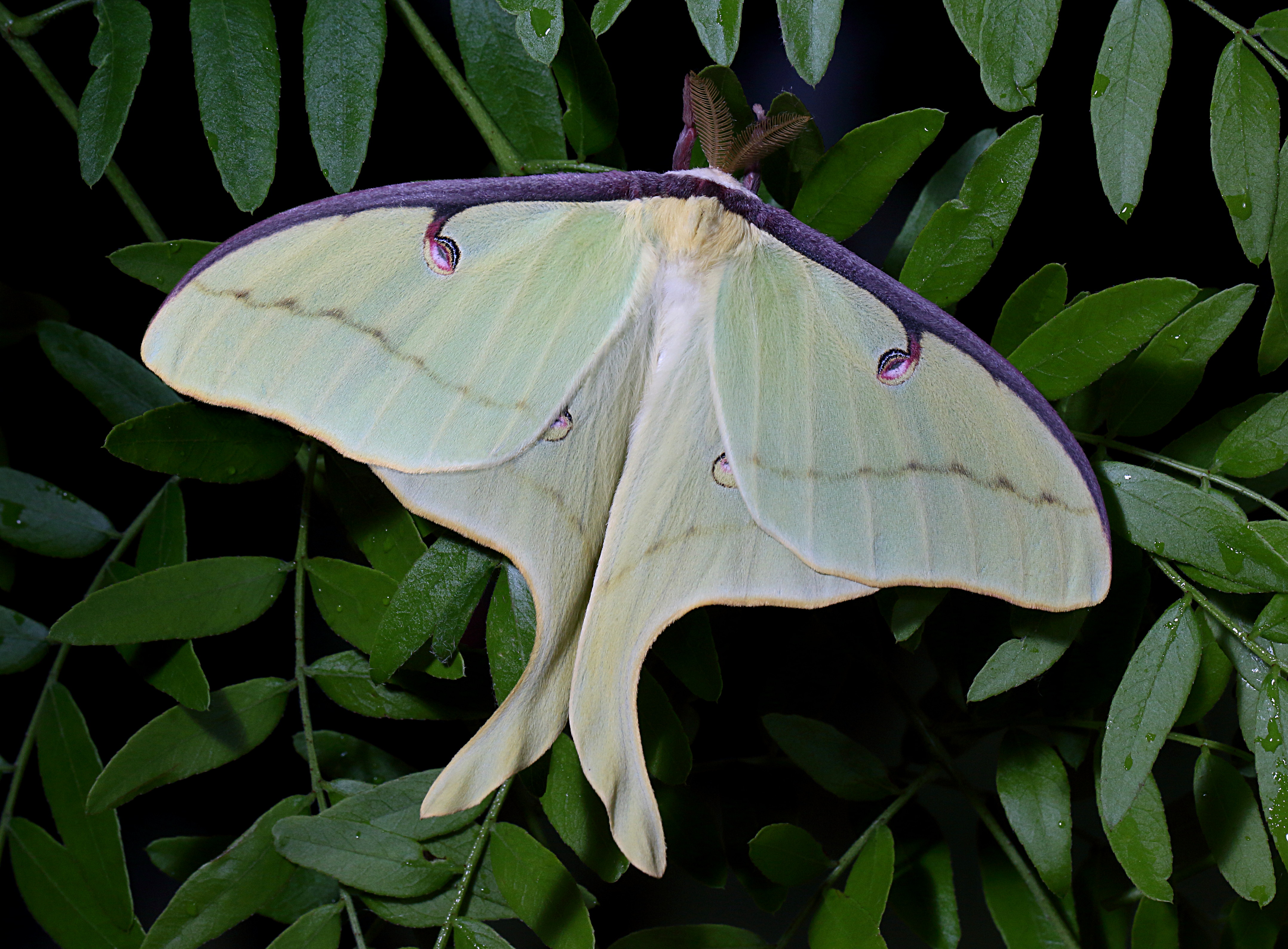 The picture of the female is one of my favorite pictures from last summer. It is especially recommended that people embiggen this one, for she is a creature of great ethereal beauty. 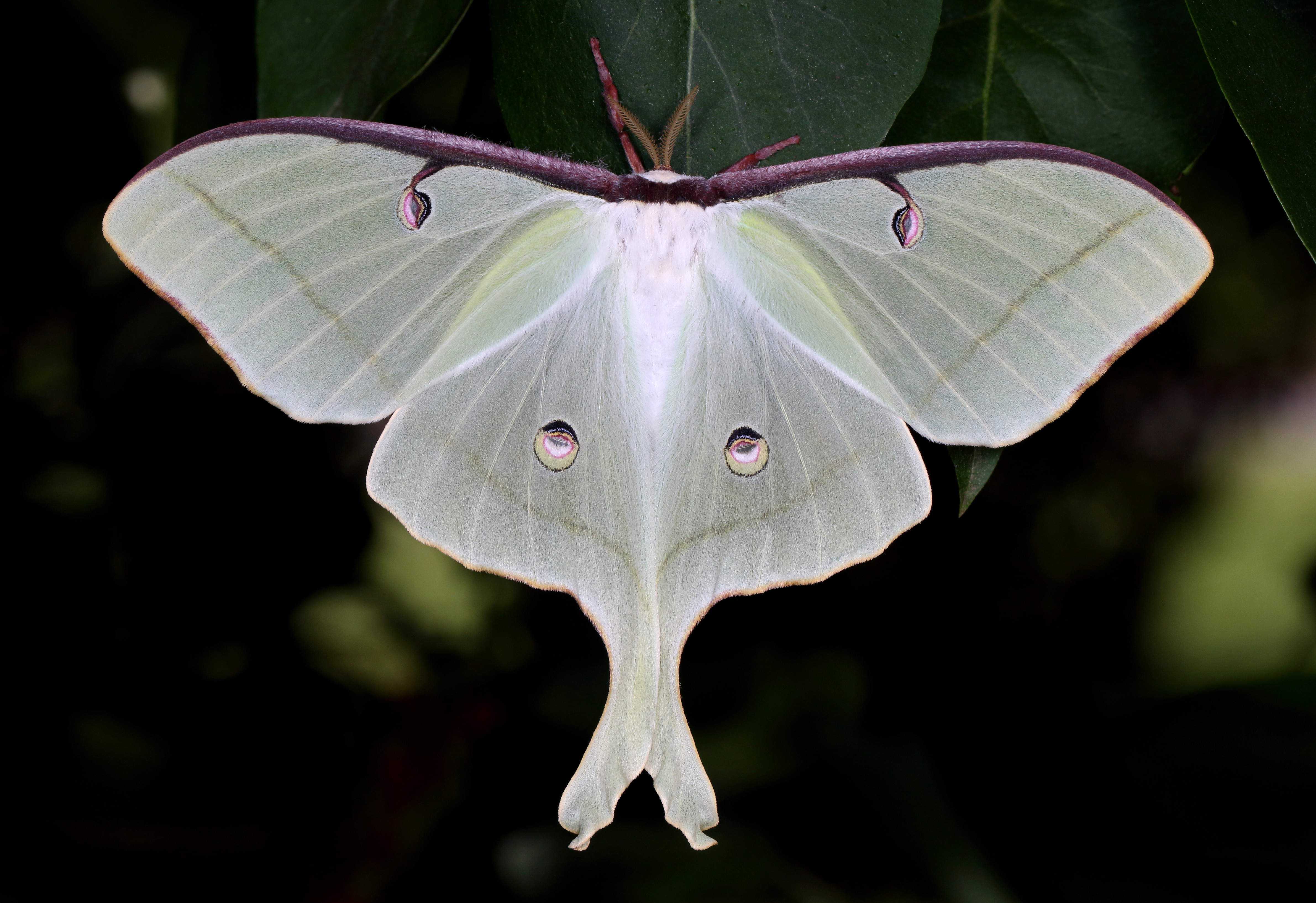 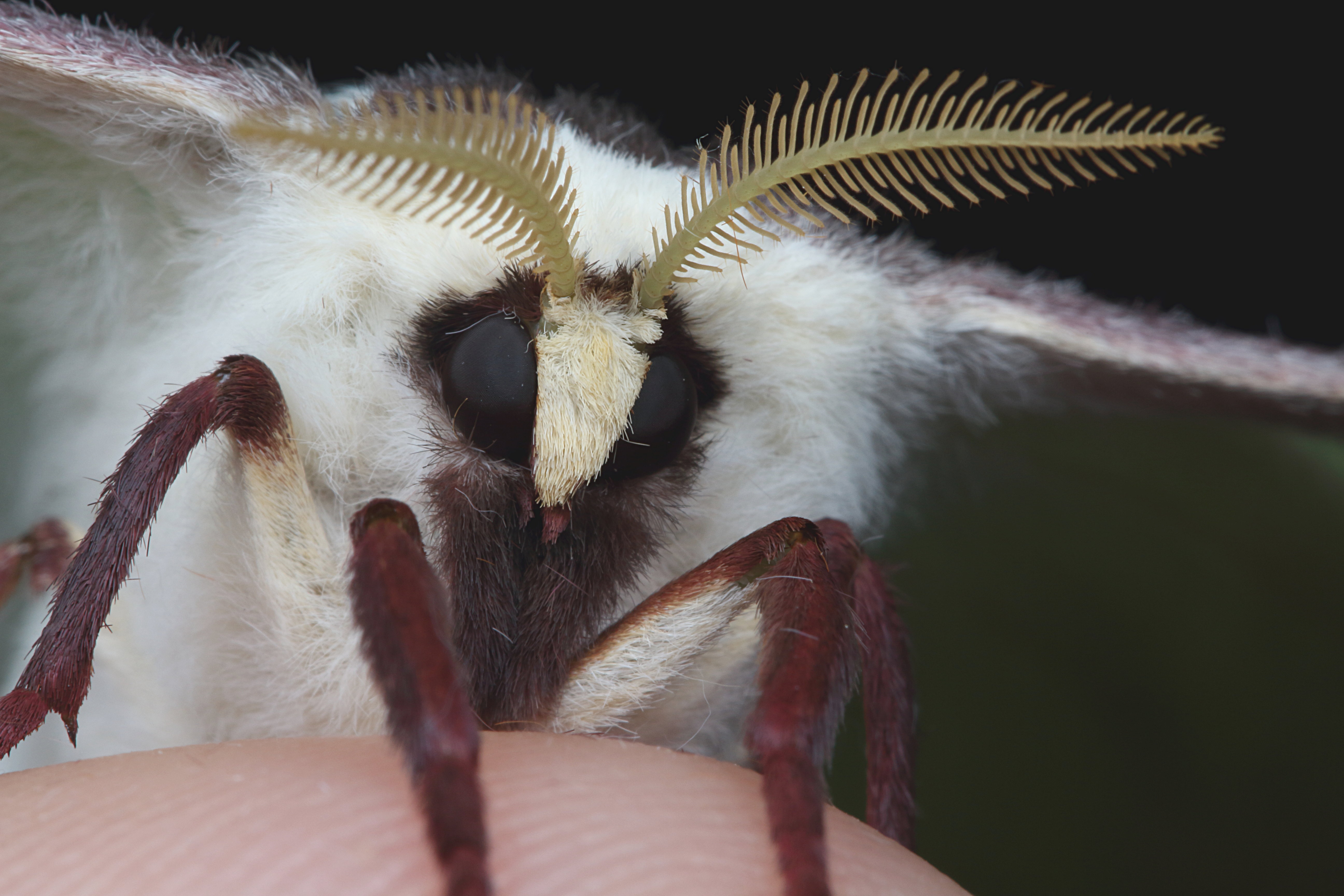 Next is a mating pair of six-spotted tiger beetles (Cicindella sexguttata), by far the most common of our local species of these predatory beetles. One can see here that males have slightly longer mandibles, and that their added length assists them during mating. 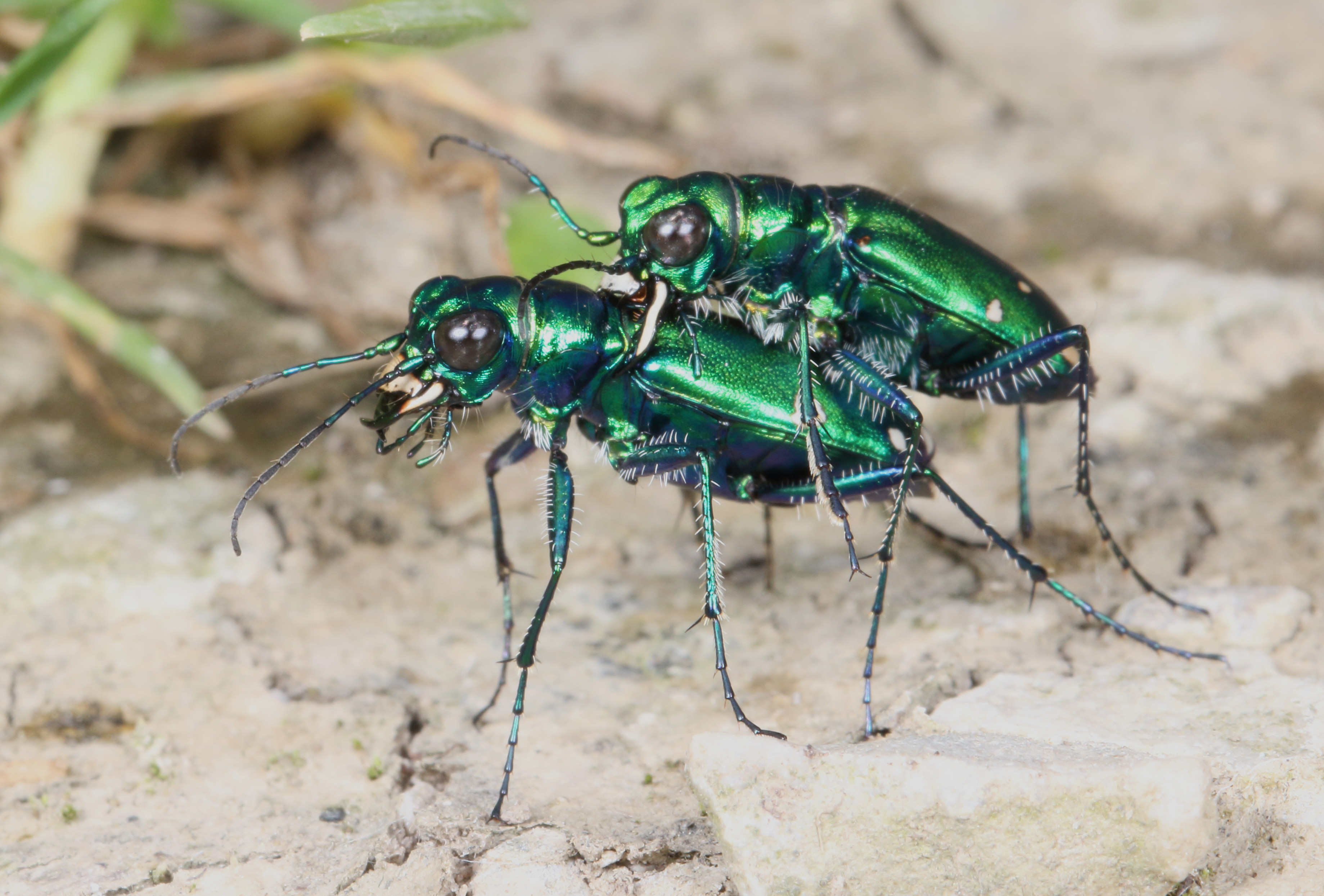 During one of my outings to a local lake, a loudly buzzing insect landed solidly on the back of my hat with an impact that suggested it was pretty big. I took off my hat and found an eyed elator click beetle. This was the first time I had seen one of these babies! Alaus oculatus is our largest click beetle, measuring nearly two inches long. The large black eye spots on the thorax are possibly meant to startle predators. Click beetles are so named by their ability to snap their thorax, as shown here. This is used to escape trouble and to right themselves. 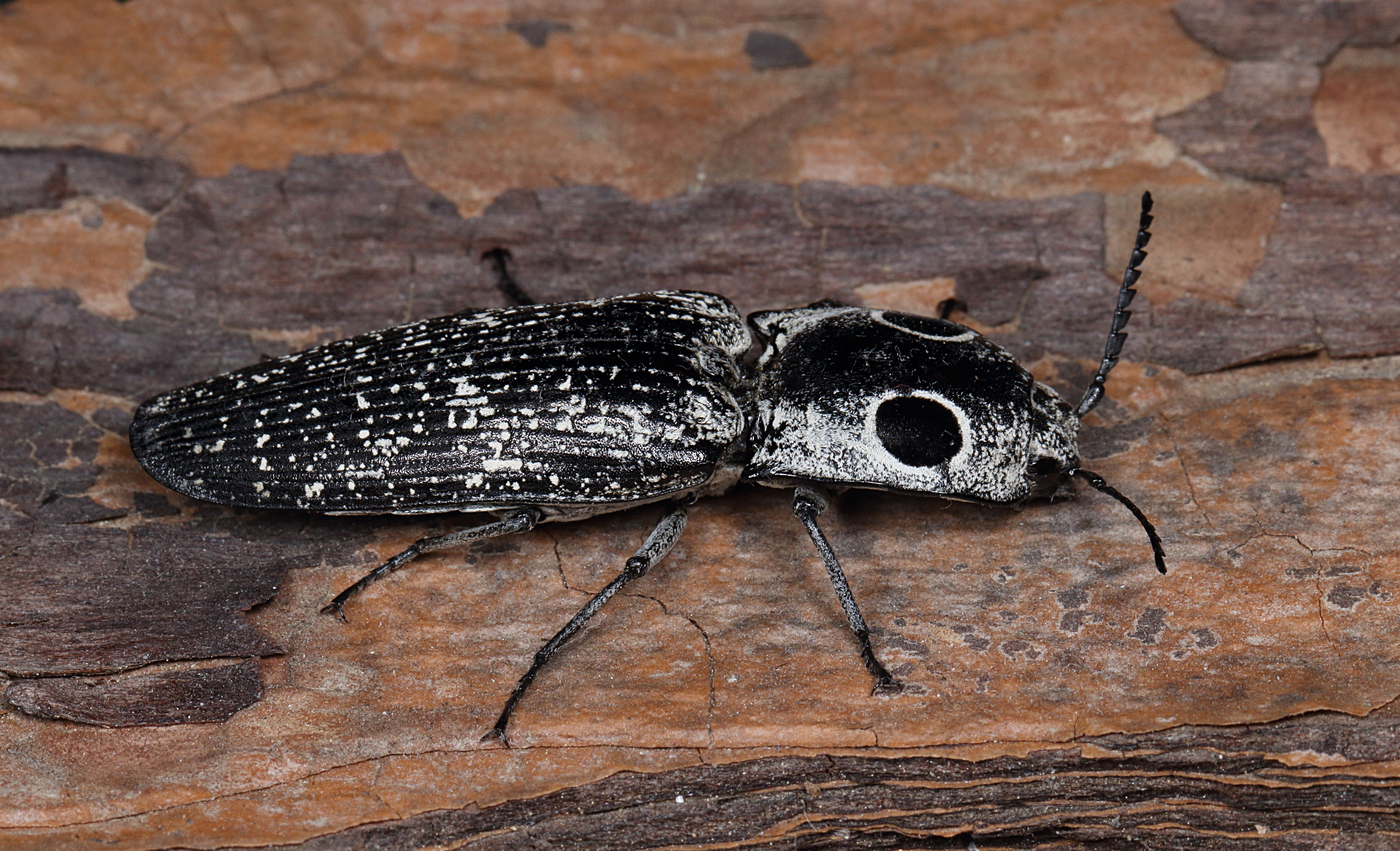 Next we move on to Odonates. The first two are male and female variable dancer (a.k.a. violet dancer) damselflies (Argia fumipennis). The male is young. As he matures, he will gradually turn a violet color as shown in the linked picture. 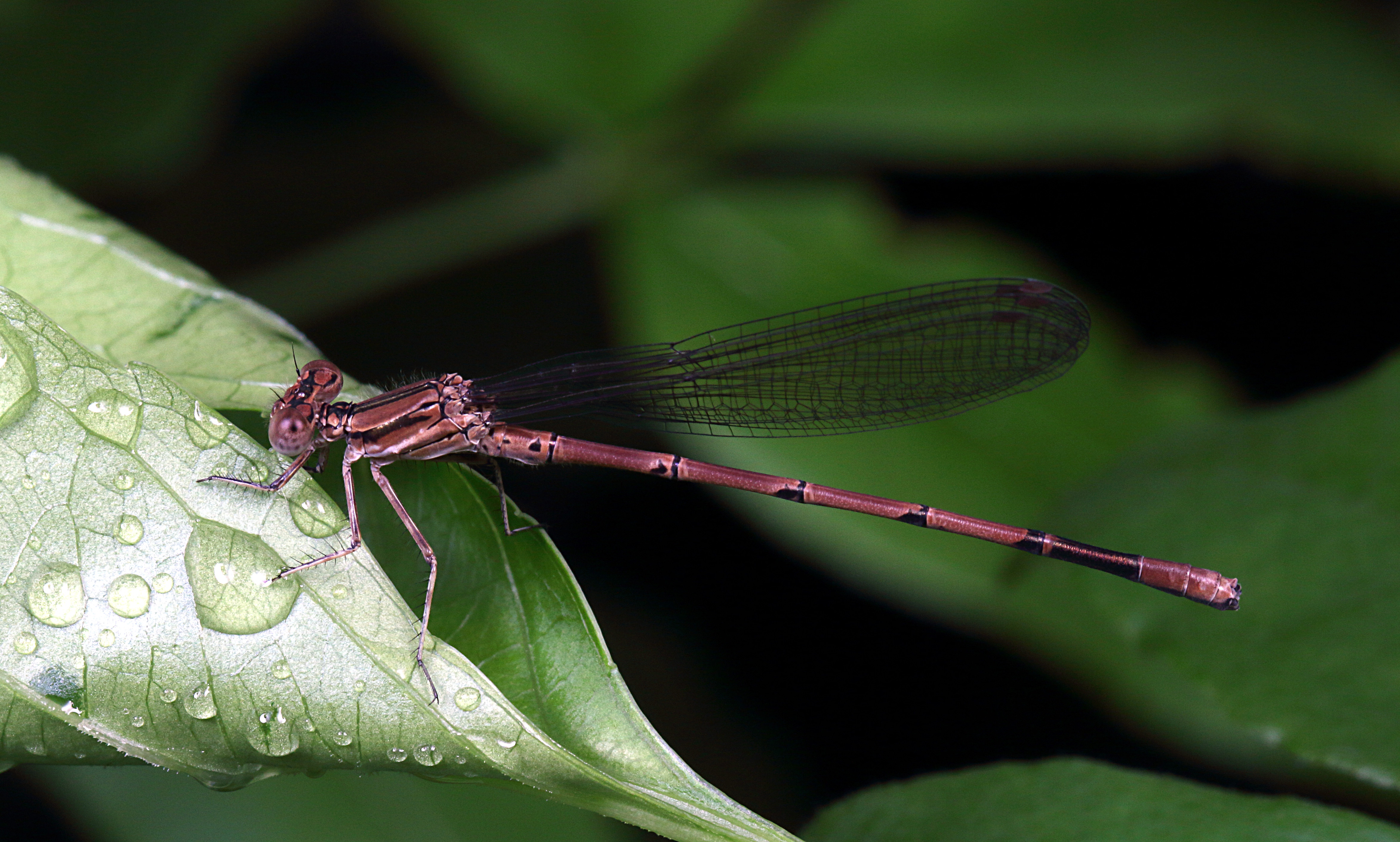 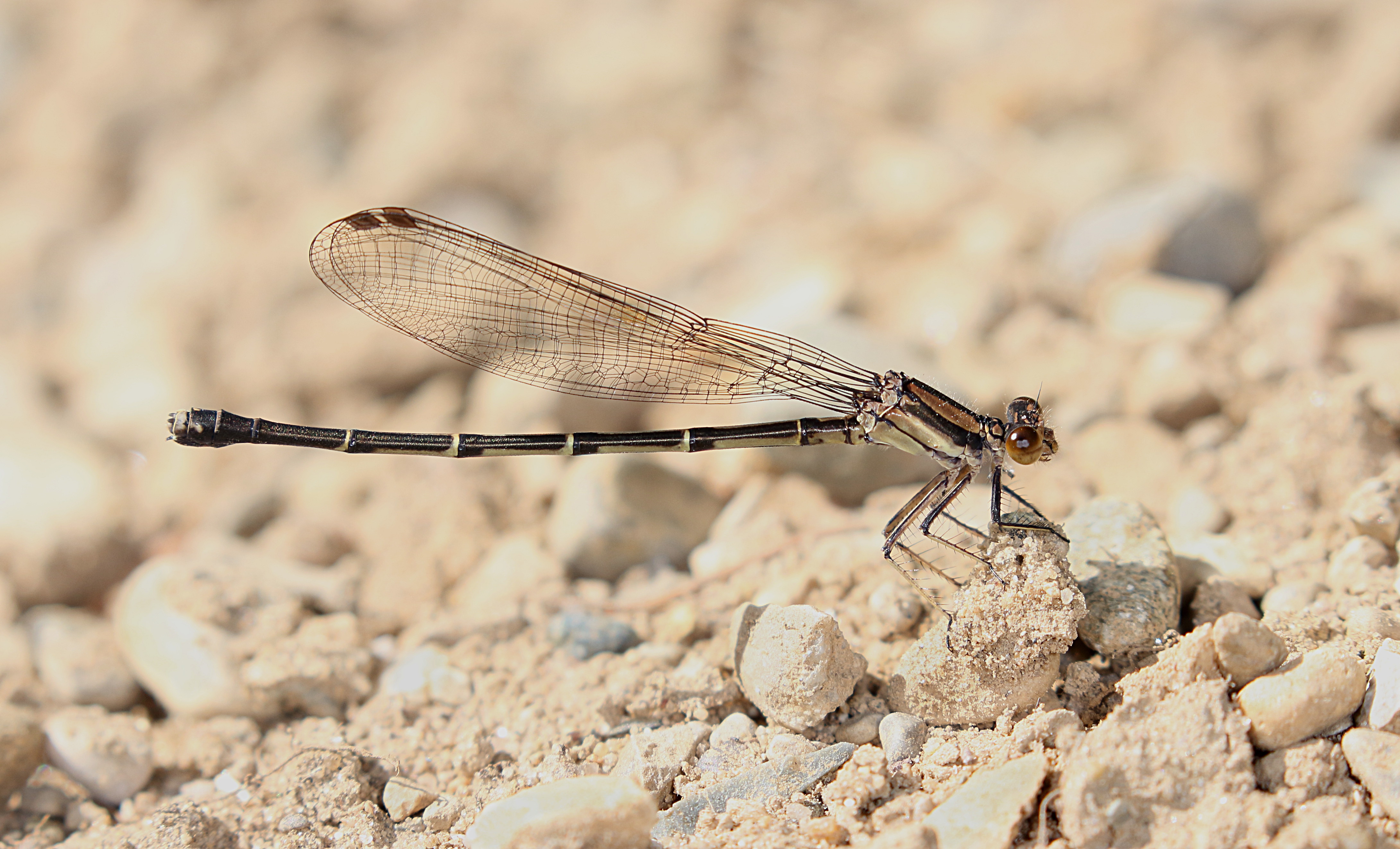 Moving on to dragonflies, the last three pictures are from the large family of ‘skimmers’ (Libellulidae). The first is a young male twelve-spotted skimmer (Libellula pulchella). They will develop white markings on their wings as they age. 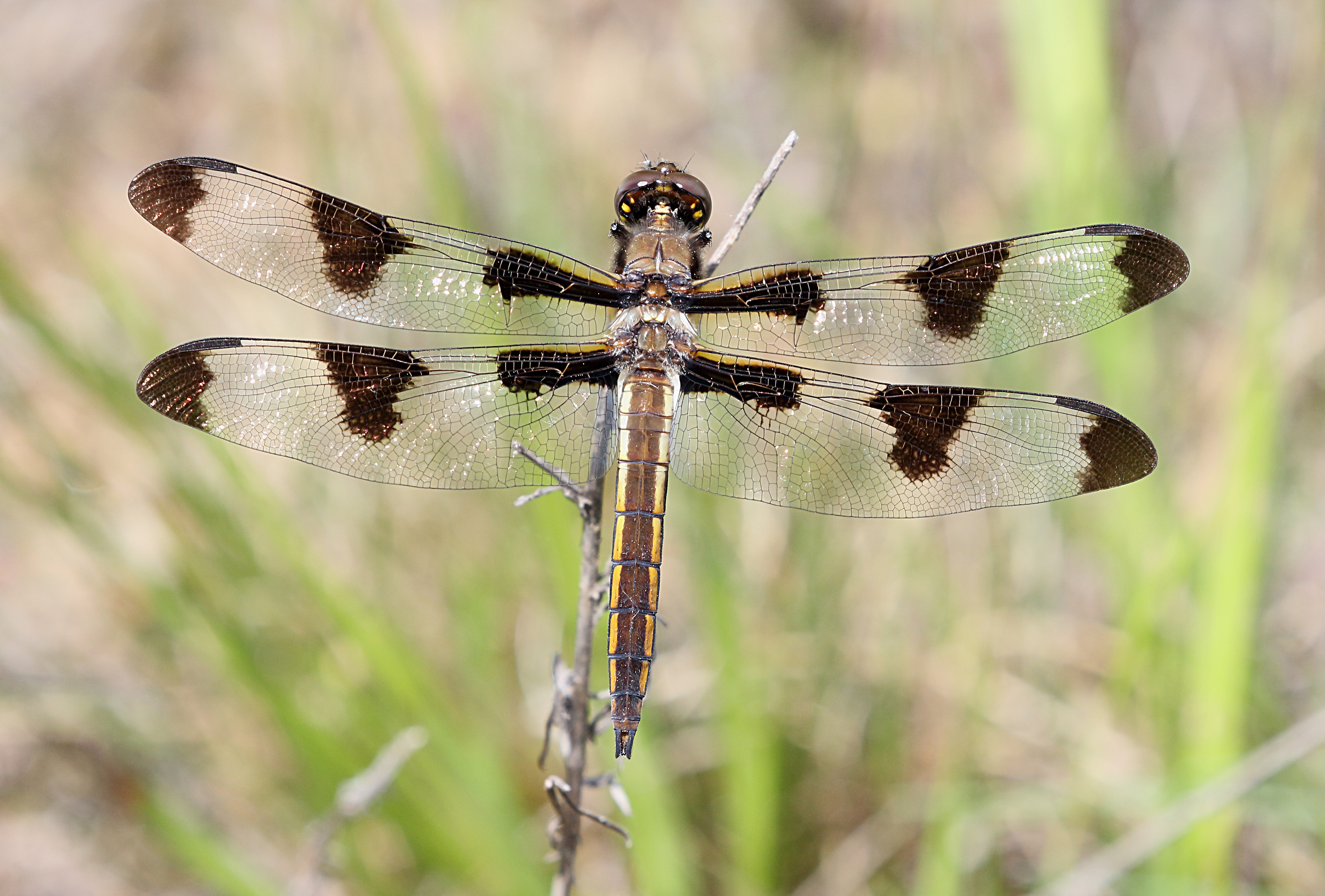 The second dragonfly is a female painted skimmer (Libellula semifasciata), and seeing it was a big surprise since I thought their range did not extend as far north as where I lived. It wanted to perch up high so the views were fore-shortened, unfortunately. So the picture is actually several different pictures that were taken at different focal points and then blended together by hand. 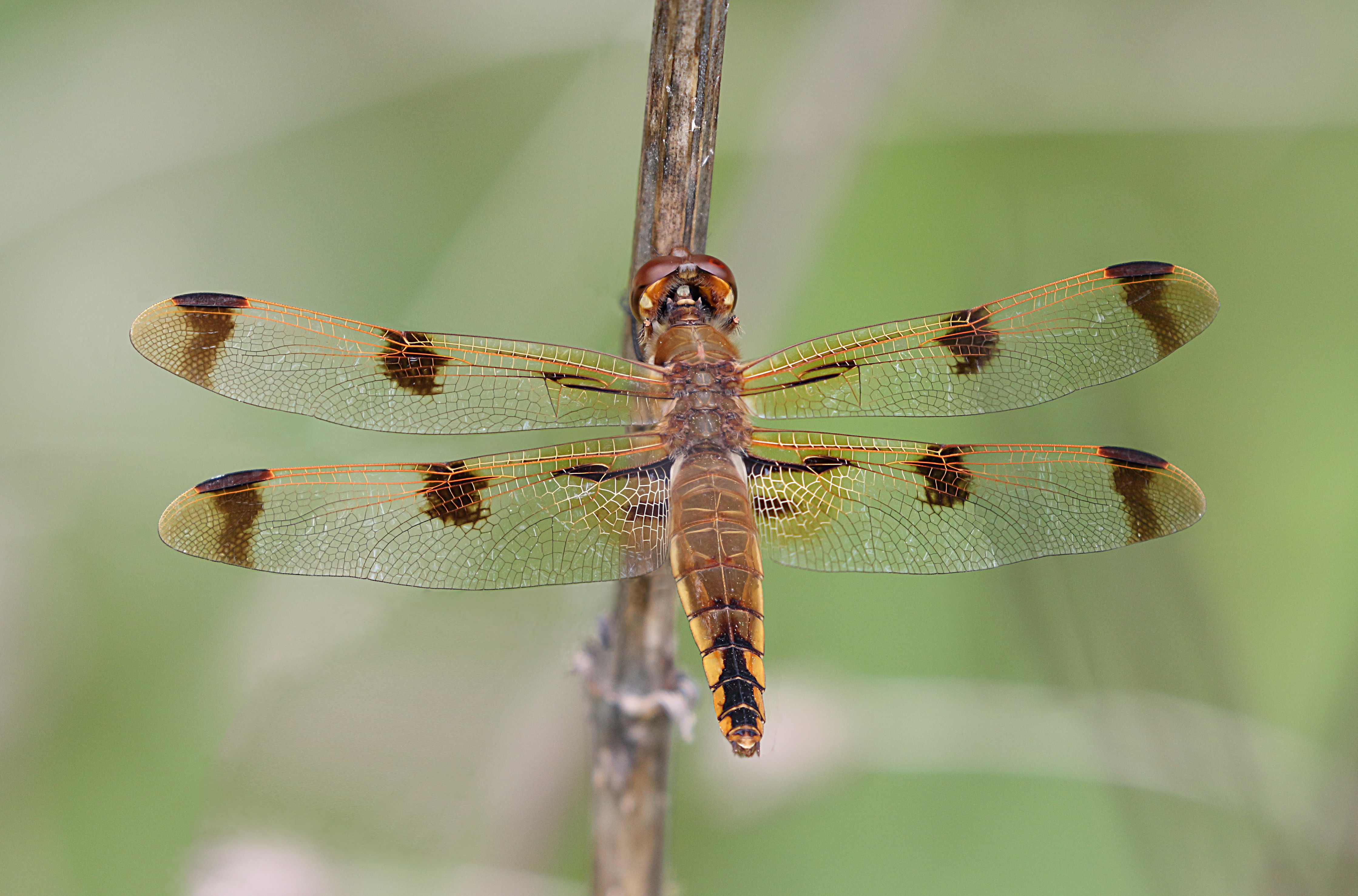 Finally, we have a male Eastern amberwing (Perithemis tenera). The amberwing is one of our smallest dragonflies, with a body barely an inch long 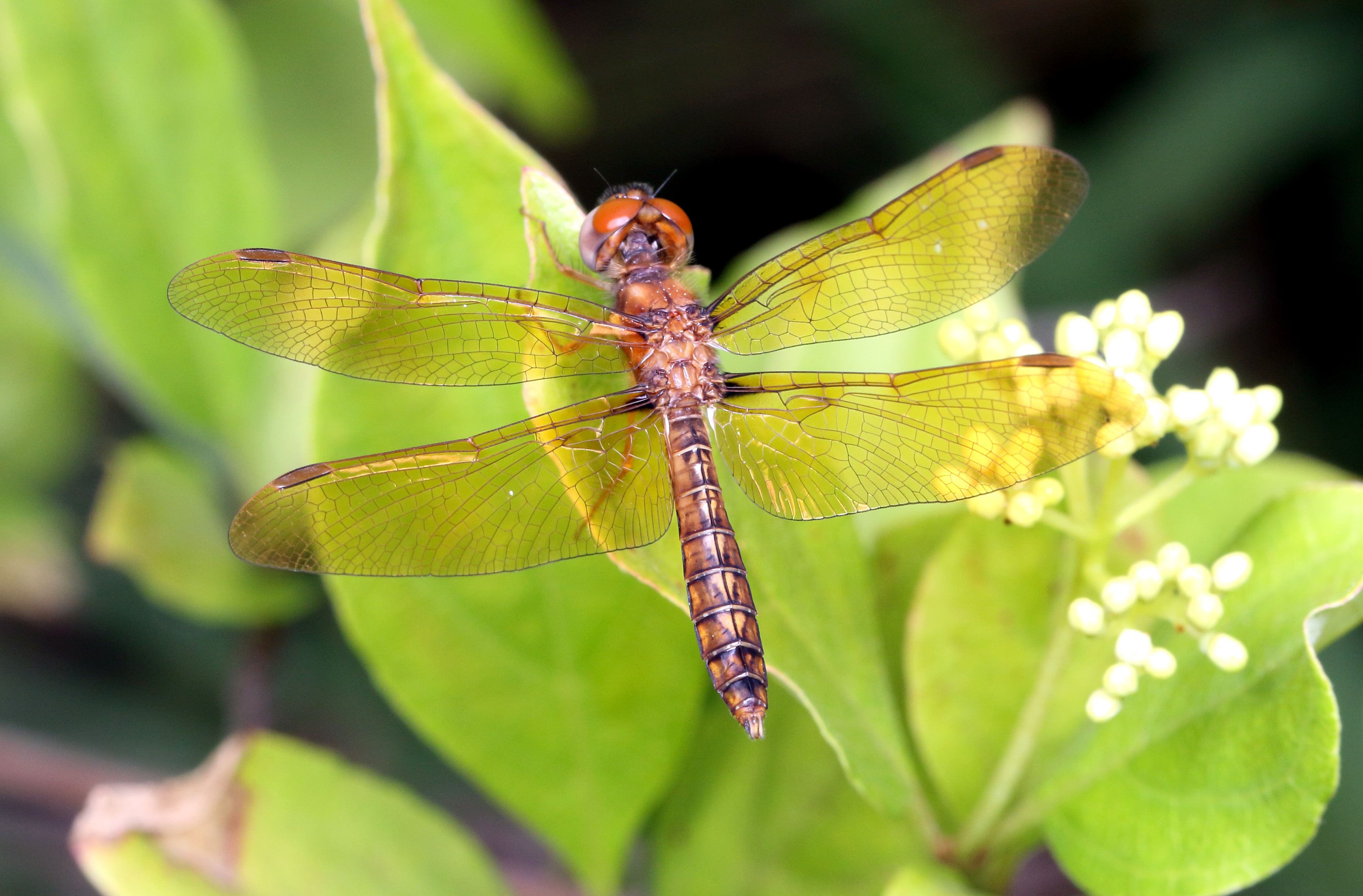 There are so many dragonfly pictures from last summer, including many new species, that I probably should prepare some posts here that are dedicated to them. This is a Good Thing since I love dragonflies most of all.