The good news (there’s no bad news) is that all ten ducklings are fine and have survived their first two days of life. They also seem to be thriving, eating well and swimming around vigorously, sometimes diving underwater and popping up like a cork a few feet away. And we’ve named mom Katie Peck in honor of the new person in Facilities (also named Katie Peck) who has helped with the ducks. Here are some photos taken over the last several days:

A few days ago, right before the first duckling appeared, a Great Blue Heron invaded the pond. I admired it for a while and then chased it away, for they eat ducklings and I don’t want it hanging about. 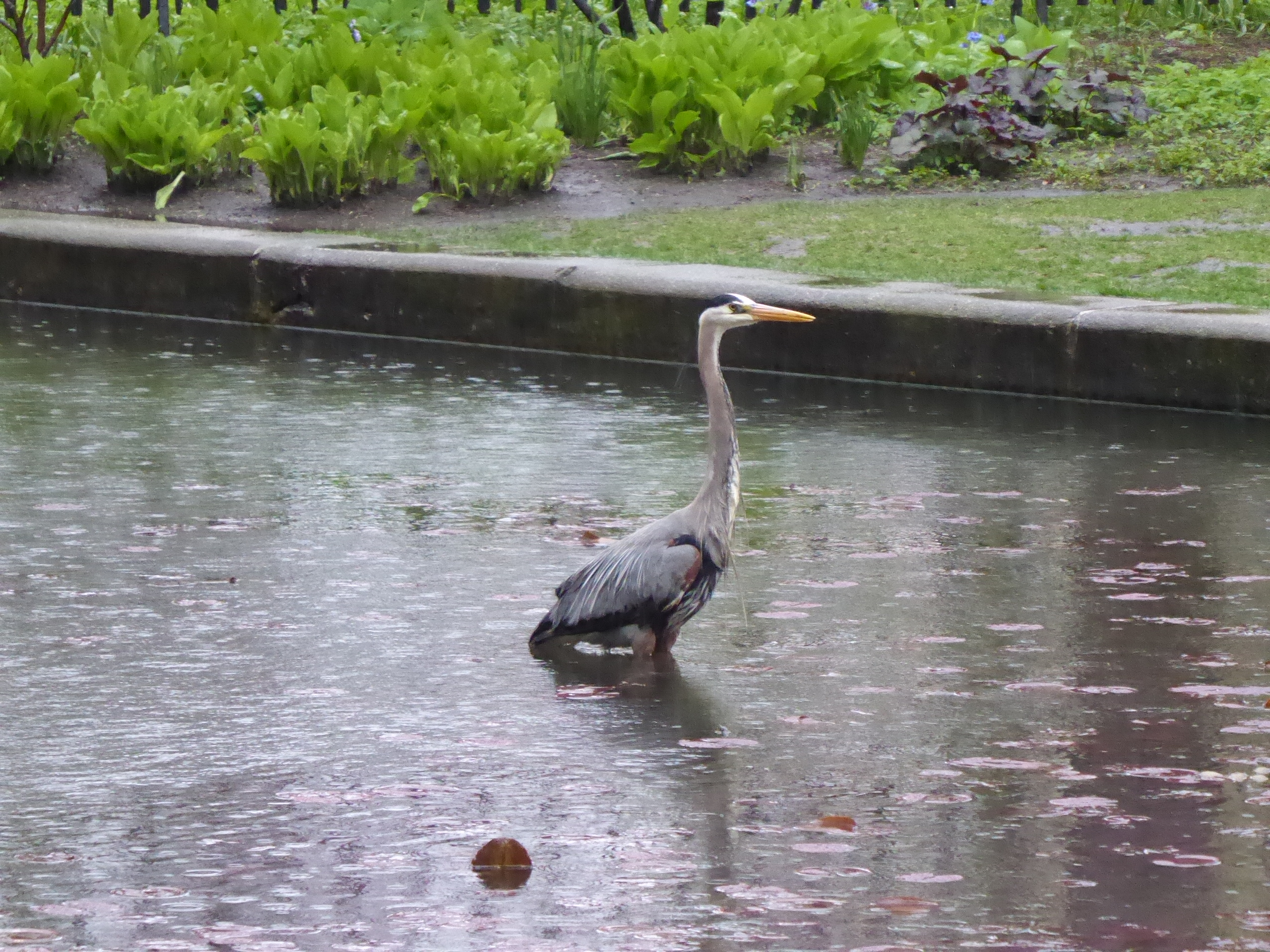 The dad, Gregory Peck, purple of head and a vociferous quacker (with the muted quacks of males). Isn’t he handsome? 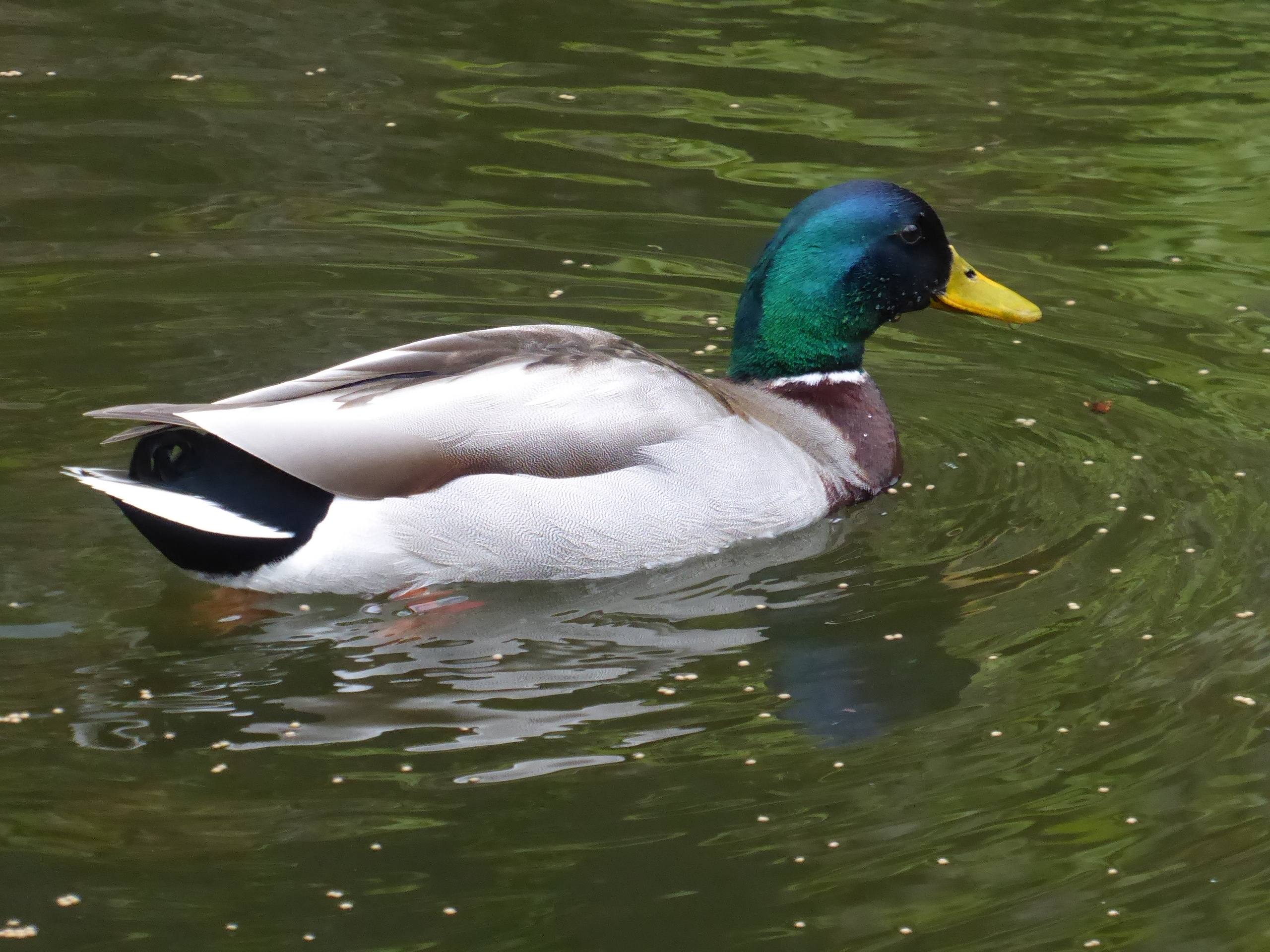 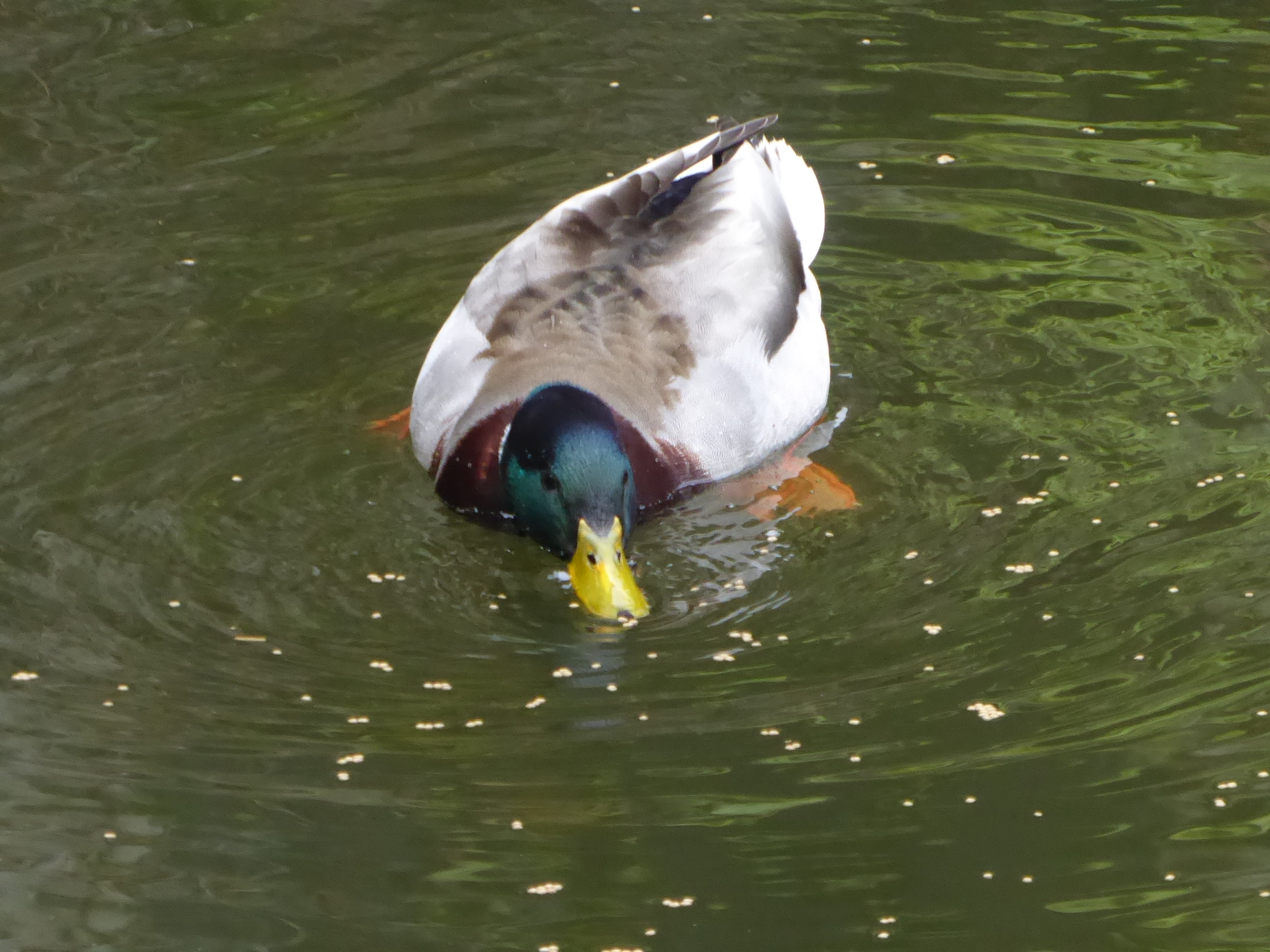 The first sign that ducklings had arrived was when I saw Katie on the shore, with her head peeking above the metal barrier. It turns out that she was guarding a single duckling on the shore. For a whole day I thought that the entire brood was just one individual. It turned out I was wrong—by a factor of ten: 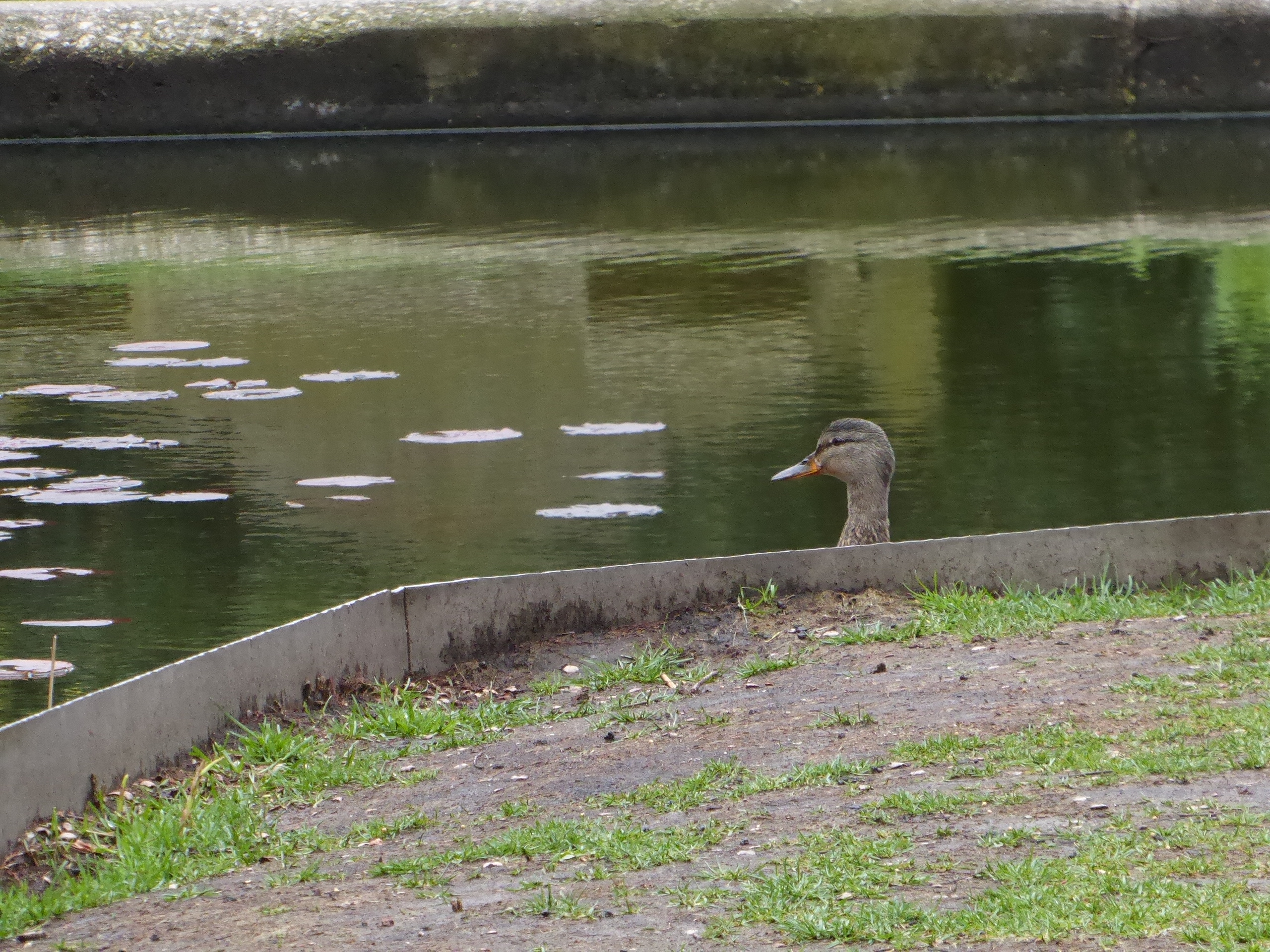 For 24 hours this was the only duckling in the pond: 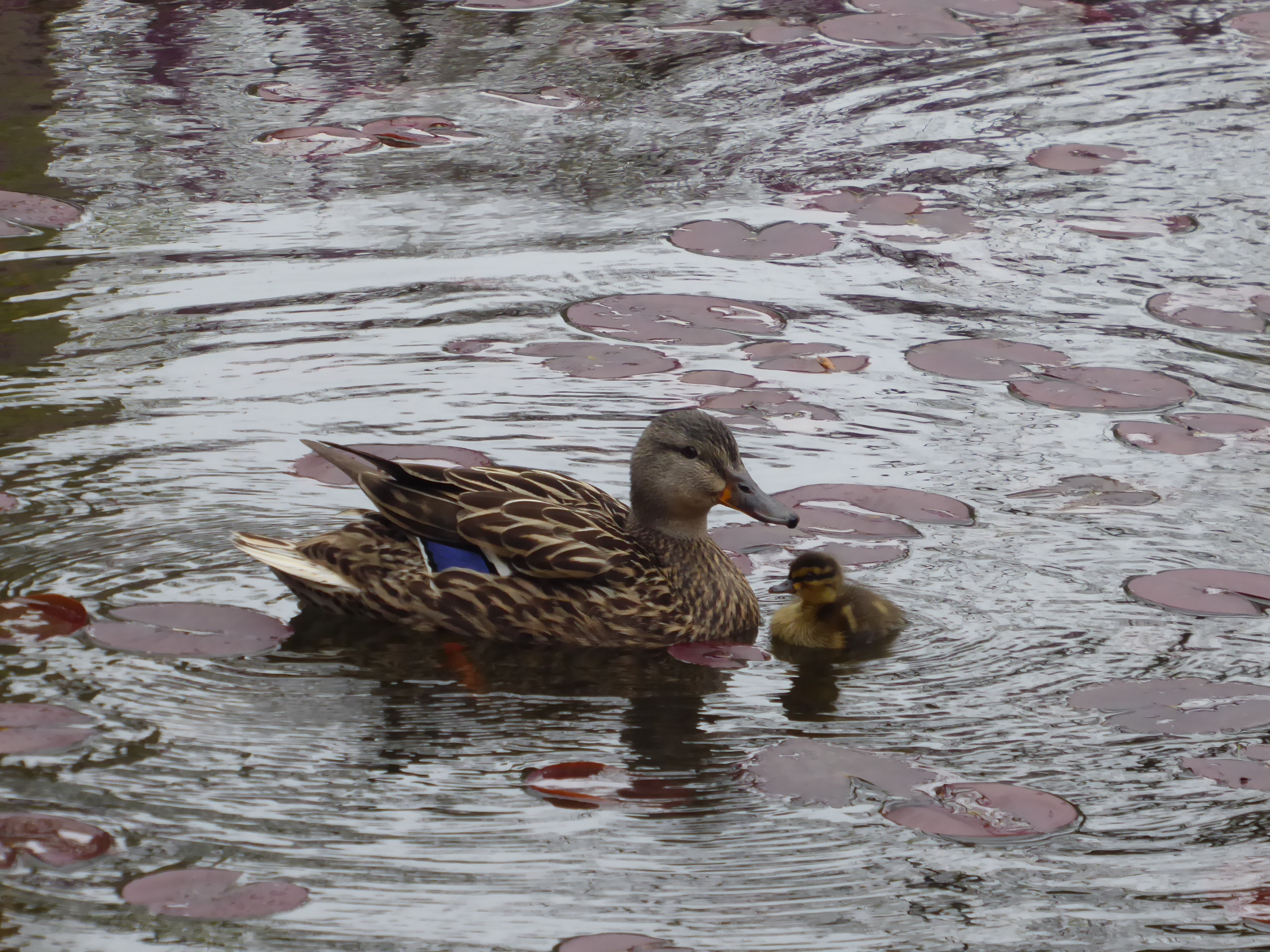 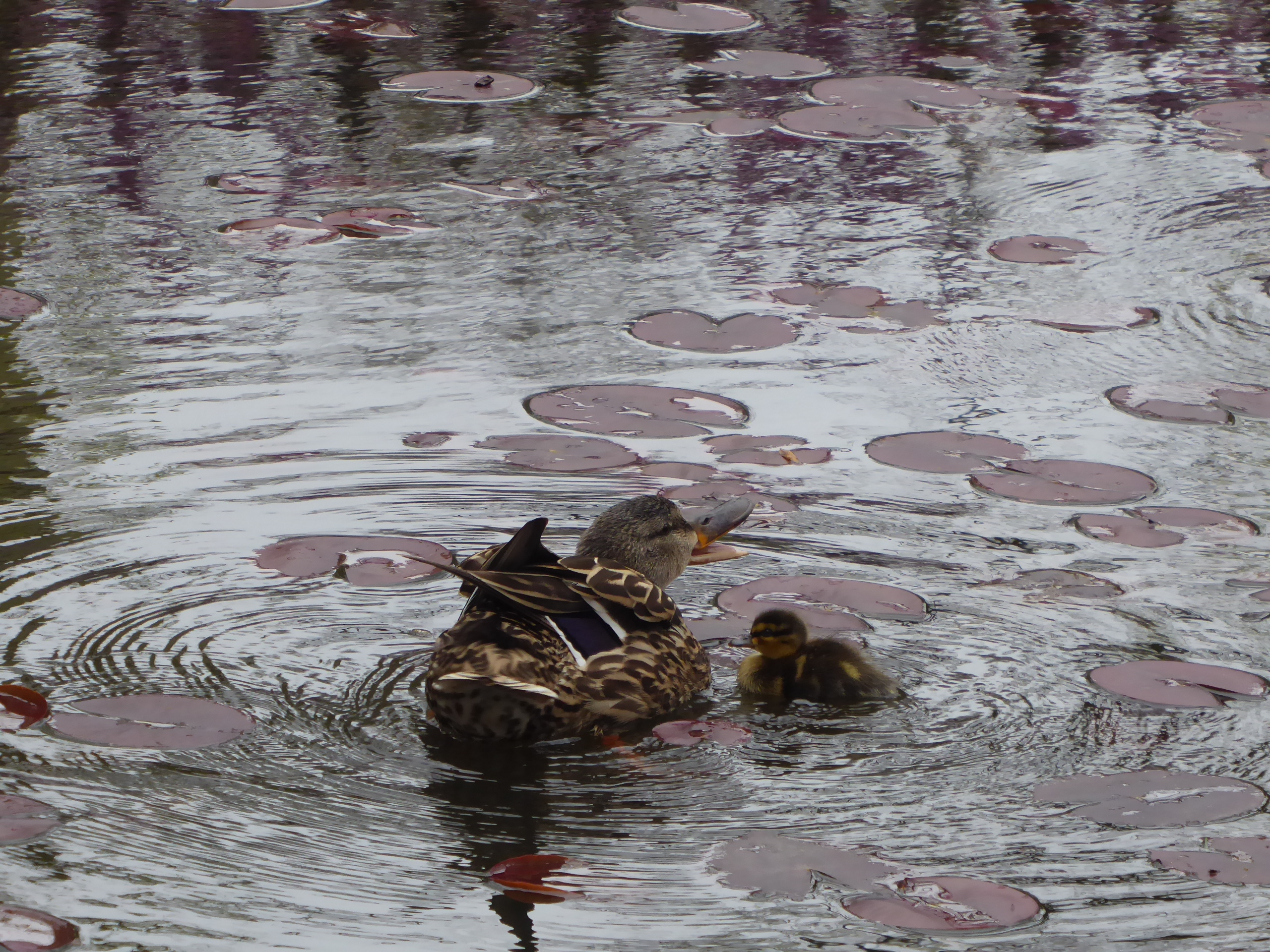 The next morning there were two ducklings in the pond, but without Katie. I was puzzled, and then heard a bunch of peeps from above. It was the rest of the ducklings ready to jump from the third-floor windowsill to the pond. Sure enough, an hour later there were ten ducklings! (Sadly, I missed the Big Jump.)

As you can see in the video below, two of the ducklings hadn’t yet jumped in the water for their first swim. But they quickly joined their siblings, taking to the pond like, well, a duck to water. 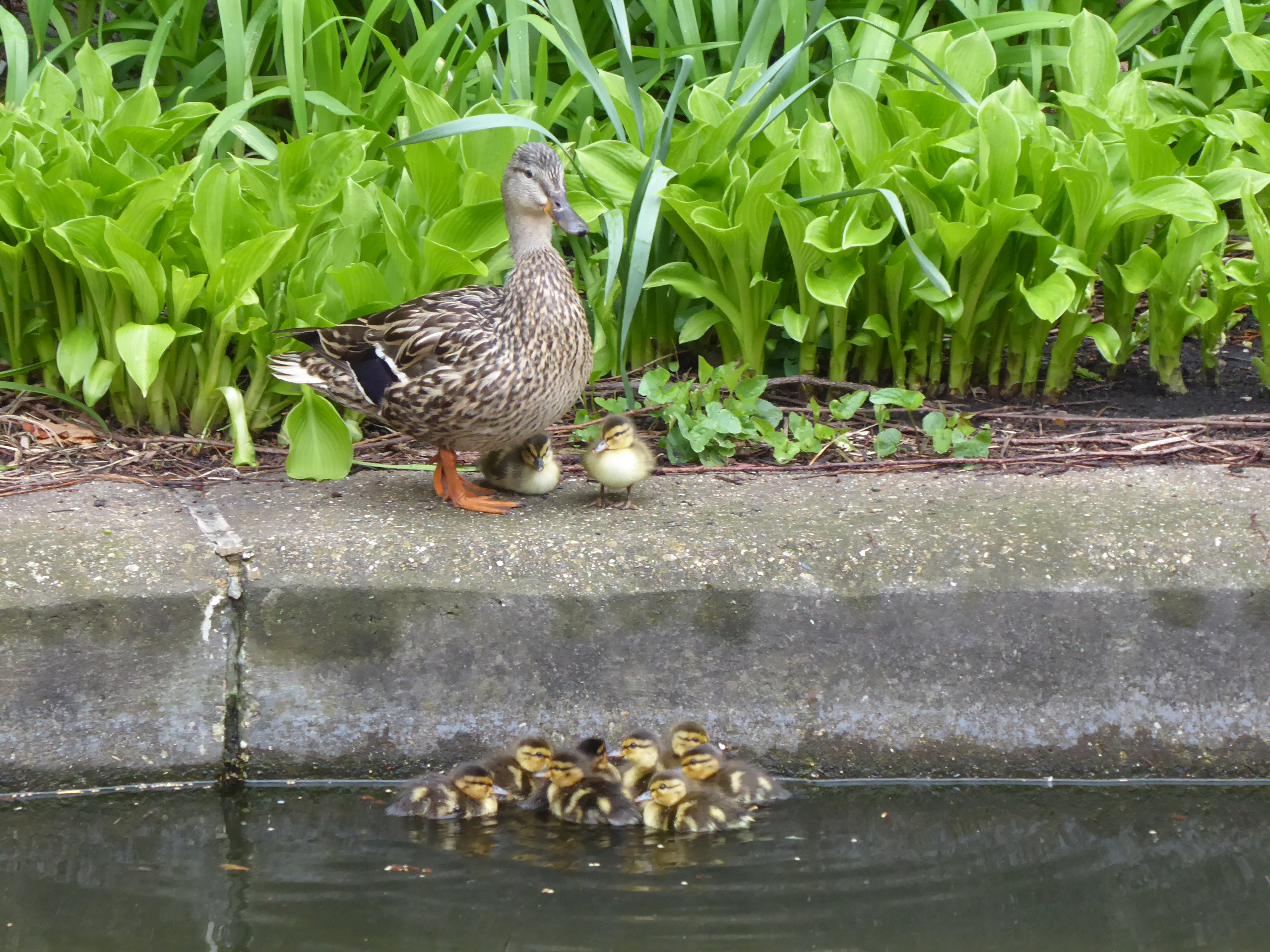 They’ve learned the ropes quickly, following mom all about and jumping on and off the duck island. Gregory is an attentive father and doesn’t bother them. 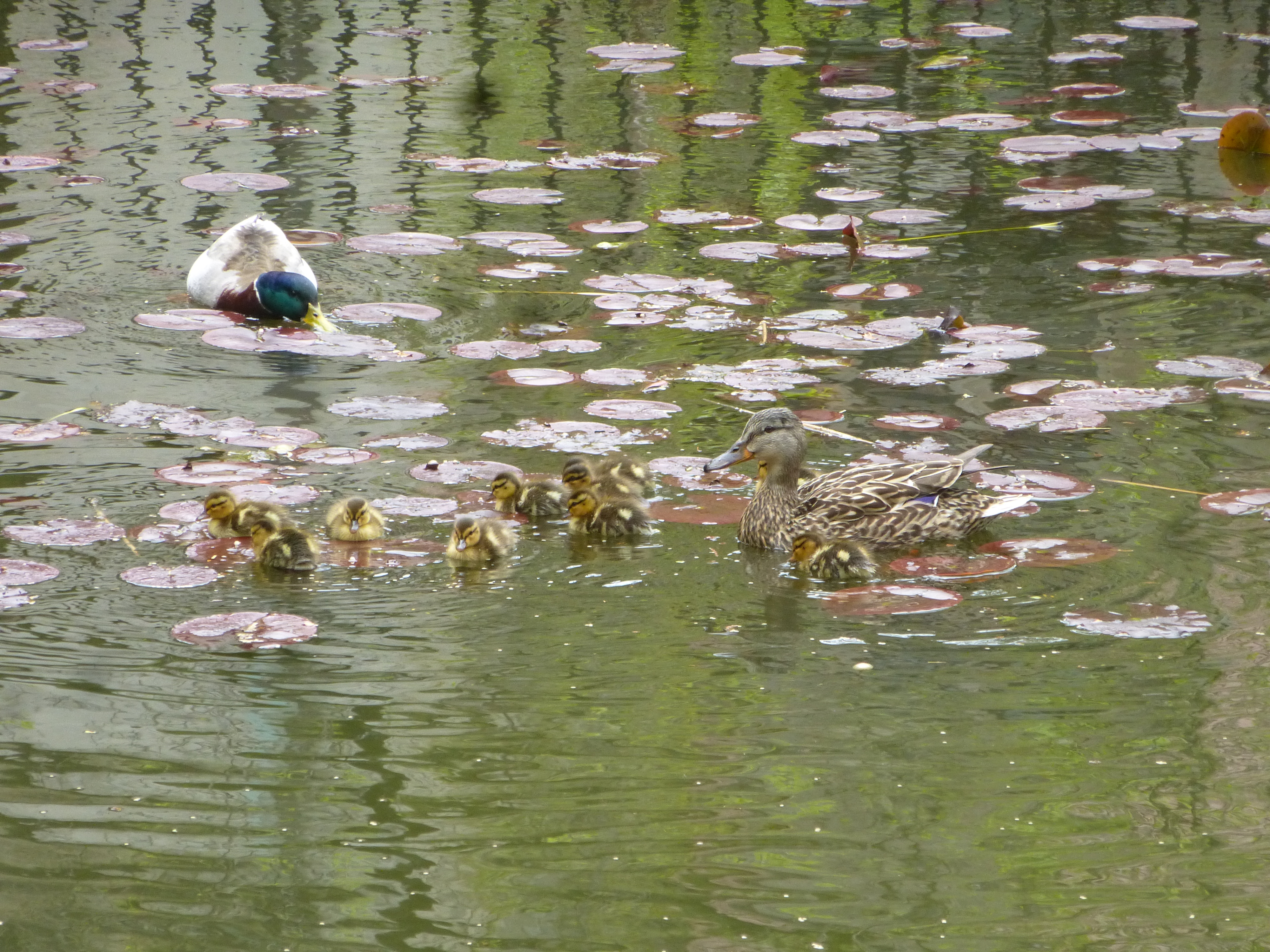 The blotches here are from my old Panasonic Lumix, whose sensor is all dusty. I forgot my new camera yesterday. 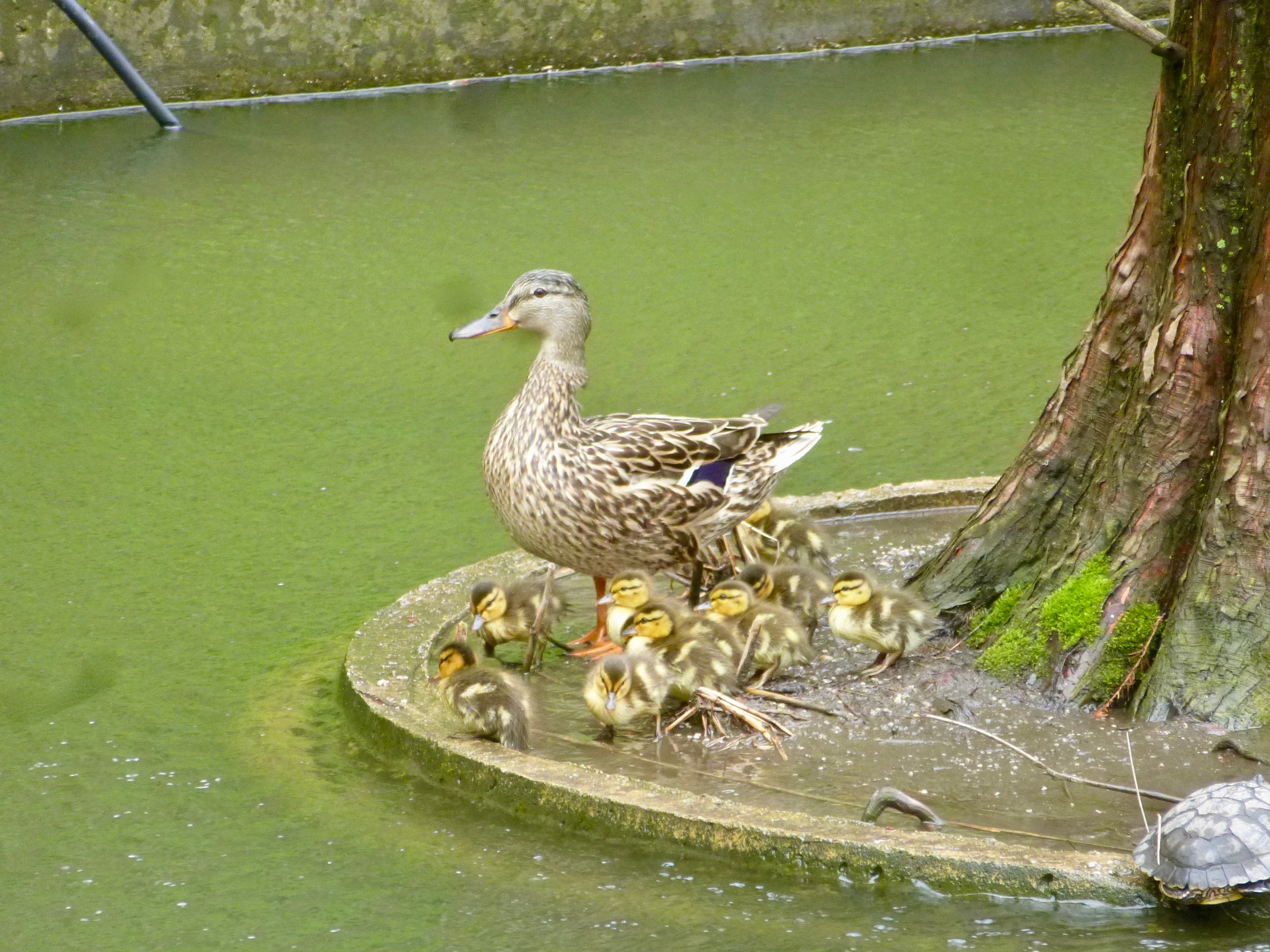 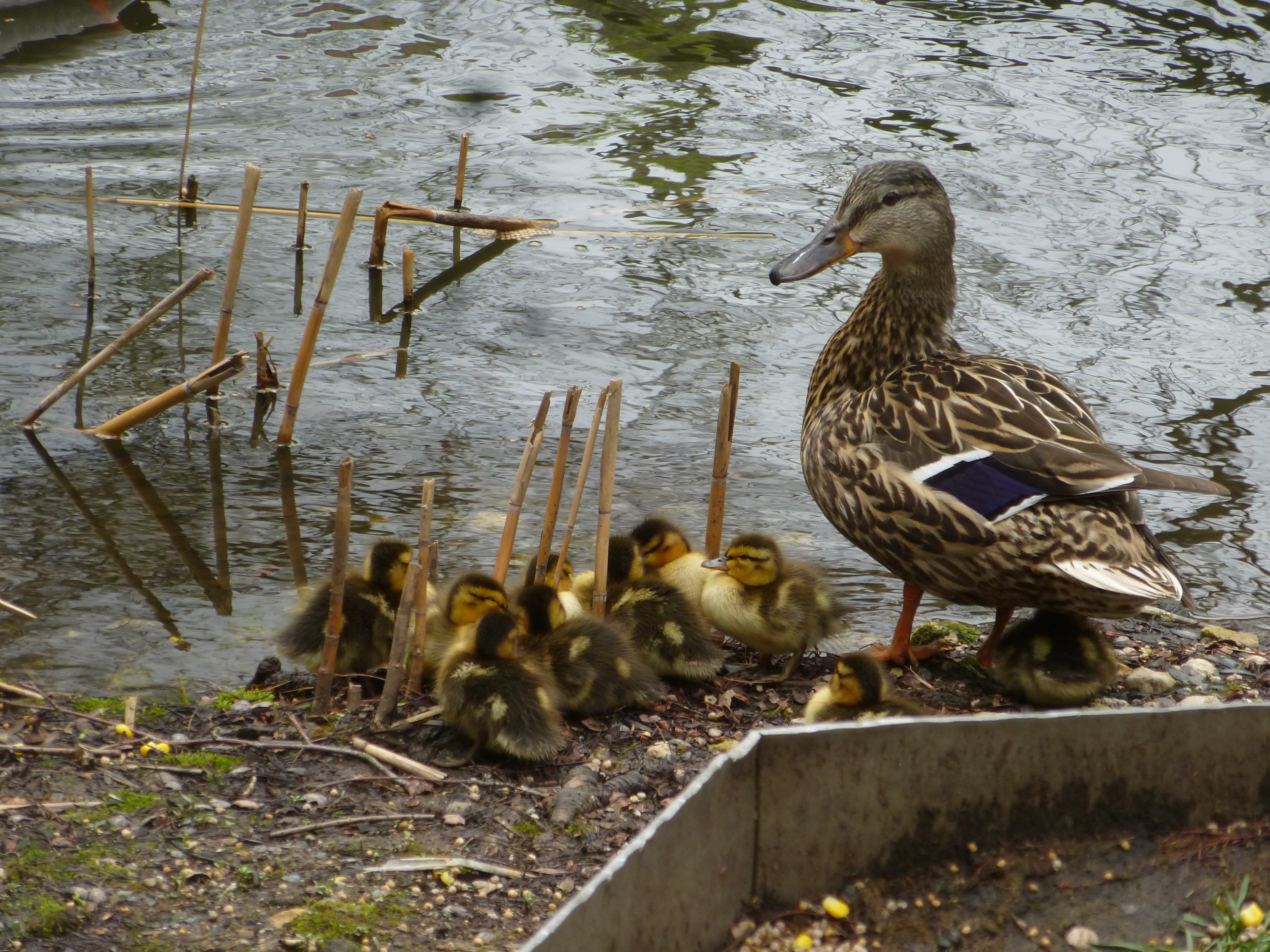 They’ve learned to use the duckling ramp, but the turtles are using it for sunbathing, which caused a traffic jam yesterday: 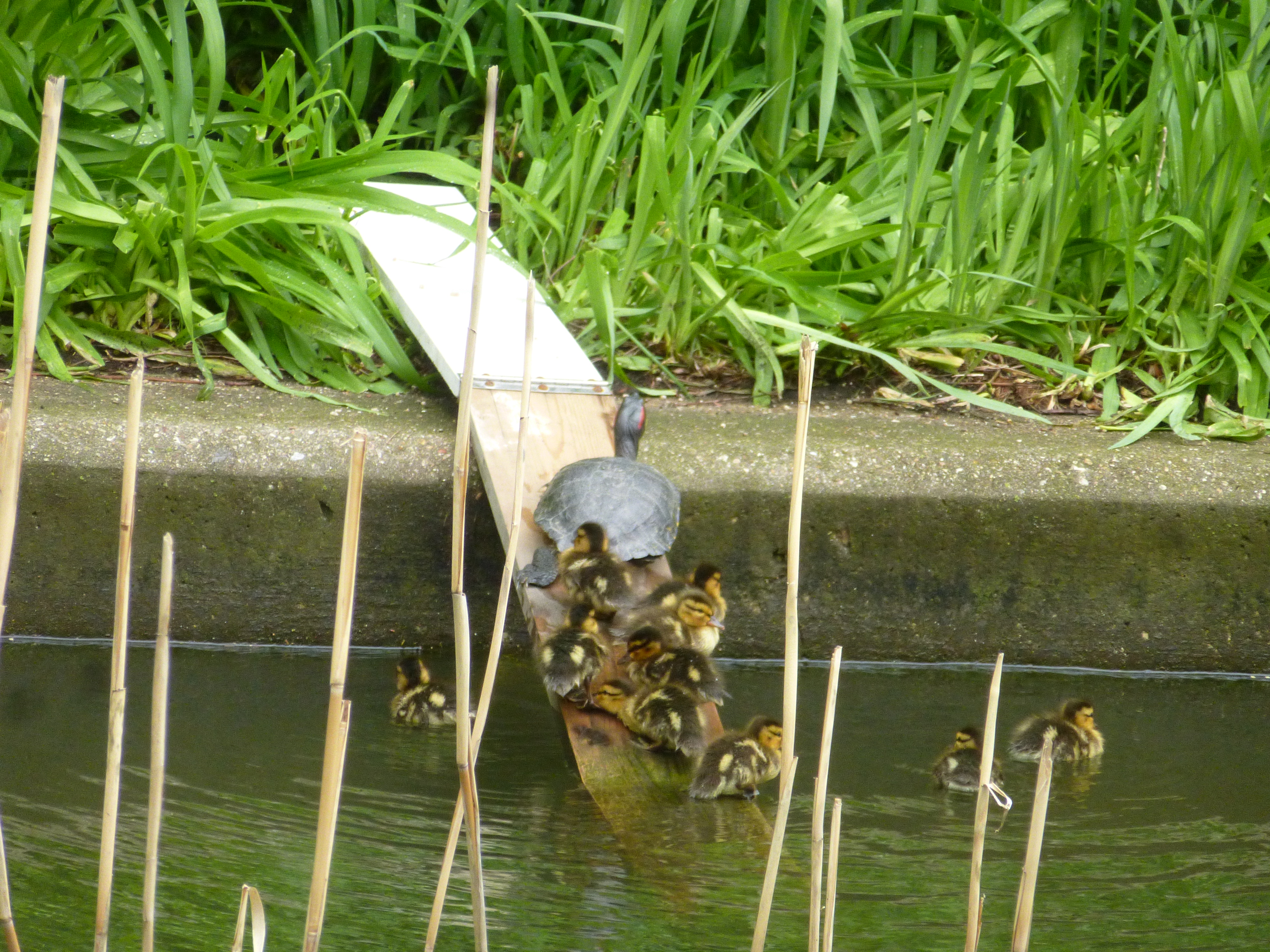 Everybody loves ducklings, and the pond is crowded with people oohing and aahing at the babies. I have to keep them from feeding bread to mom and brood, but for the time being everything is copacetic. 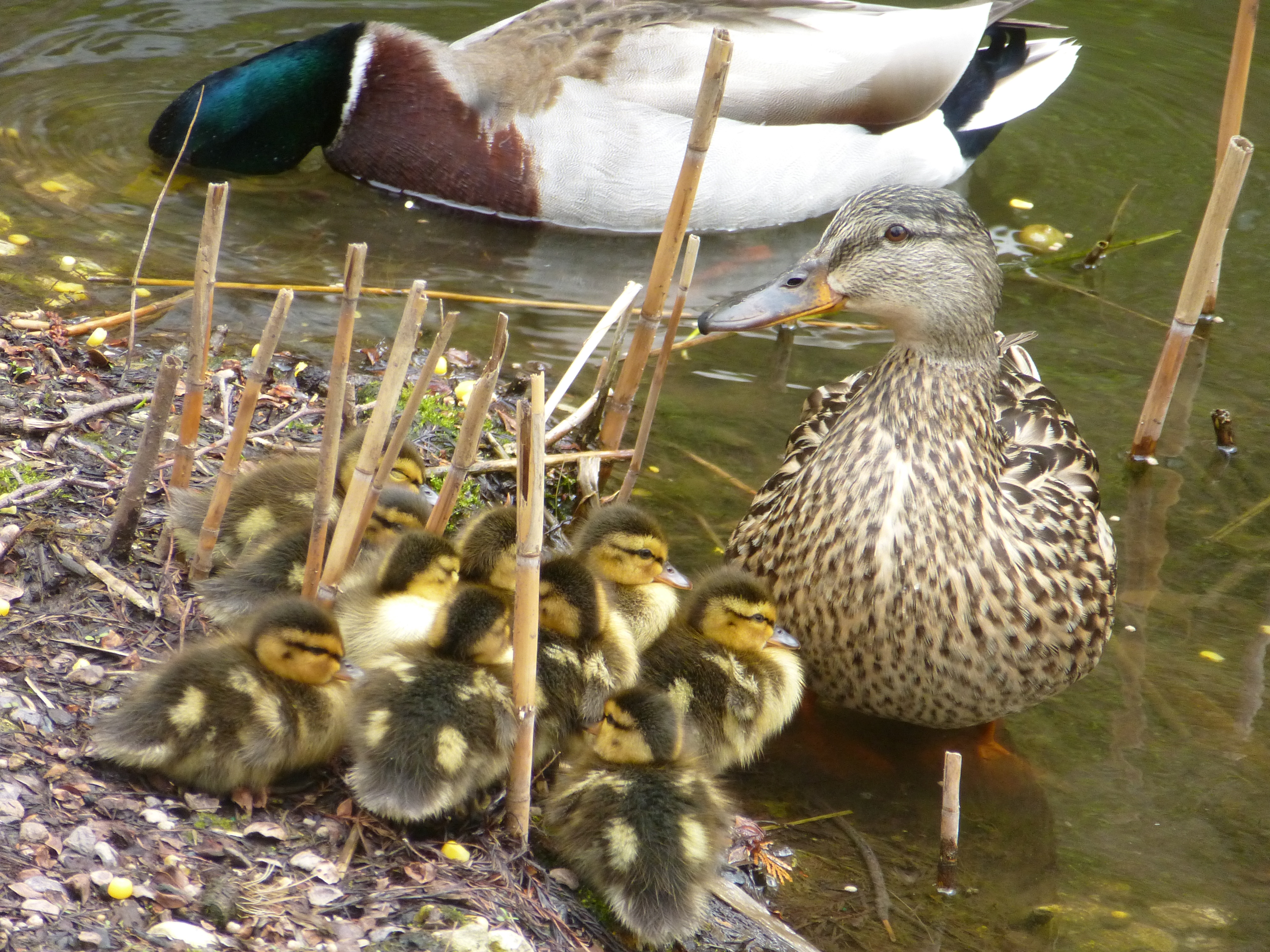 Here’s a video from May 8, just hours after 9 of the 10 ducklings jumped off the windowsill where they hatched. This is their first swim, with mom looking on. Two of them haven’t yet jumped in the water.