Sabine Hossenfelder is a theoretical physicist at Frankfurt’s Institute for Advanced Studies, and a popular writer with a long-time website (see below) as well as a new book, Lost in Math: How Beauty Leads Physics Astray. Reader Nat called my attention to her new post on BackReAction (her website) about free will. It’s short, but I was pleased to see that she agrees with me in 1). noting that her conception of free will is that of most people: contracausal (“you could have done otherwise”) free will, 2.) we don’t have the kind of free will because the laws of physics rule it out, and 3.) compatibilism is merely a semantic game which obviates the real question of agency. (I would add that compatibilism obviates the hard but socially important questions that come with accepting determinism—not because compatibilists aren’t determinists, but because they seem more concerned with semantics than with changing society in view of what we know about the universe.)

But read for yourself (see also her related post from 2016, “Free will is dead, let’s bury it.” 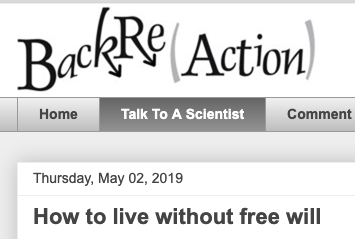 Physics deals with the most fundamental laws of nature, those from which everything else derives. These laws are, to our best current knowledge, differential equations. Given those equations and the configuration of a system at one particular time, you can calculate what happens at all other times.

Taken together, this means that the part of your future which is not already determined is due to random chance. It therefore makes no sense to say that humans have free will.

I think I here spell out only the obvious, and use a notion of free will that most people would agree on. You have free will if your decisions select one of several possible futures. But there is no place for such a selection in the laws of nature that we know, laws that we have confirmed to high accuracy. Instead, whatever is about to happen was already determined at the big bang – up to those random flukes that come from quantum mechanics.

And like me, she has no time for compatibilism:

Now, some people try to wiggle out of this conclusion by defining free will differently, for example by noting that no one can in practice predict your future behavior (at least not currently). One can do such redefinitions, of course, but this is merely verbal gymnastics. The future is still fixed up to occasional chance events.

Others try to interpret quantum randomness as a sign of free will, but this is in conflict with evidence. Quantum processes are not influenced by conscious thought. Chaos is deterministic, so it doesn’t help. Goedel’s incompleteness theorem, remarkable as it is, has no relevance for natural laws.

Finally, I agree with her conclusion that “a large fraction of people are cognitively unable to question the existence of free will, and there is no argument that can change their mind.” It’s not that people don’t understand what people like Hossenfelder and I are saying, it’s just that they don’t want to accept it because the illusion of agency is so powerful and they can’t bear to think of themselves as meat robots guided by the laws of physics.

In that sense, and in many others, belief in libertarian free will is like a religion: it goes against the scientific facts and yet people refuse to give it up whatever the evidence against it.  Further, philosophers like Dan Dennett, who oppose the “Little People” argument when it comes to religion (i.e., “we need faith to hold society together”), will nevertheless make the same argument when it comes to free will. (See other Little People-ists at the bottom of this post.)

She is quite active answering questions and objections in her comment section, and I’ll put up her response to a “criticism” that I often hear, one that has been made on this site. “How can you prove that there is no contracausal free will?” (To me that’s like asking “How can you prove that stars beyond our ability to observe obey the laws of physics?”). “Pete’s” claim that the feeling of having libertarian free will constitutes some evidence for it is in fact no evidence at all, particularly in the face of the physics. 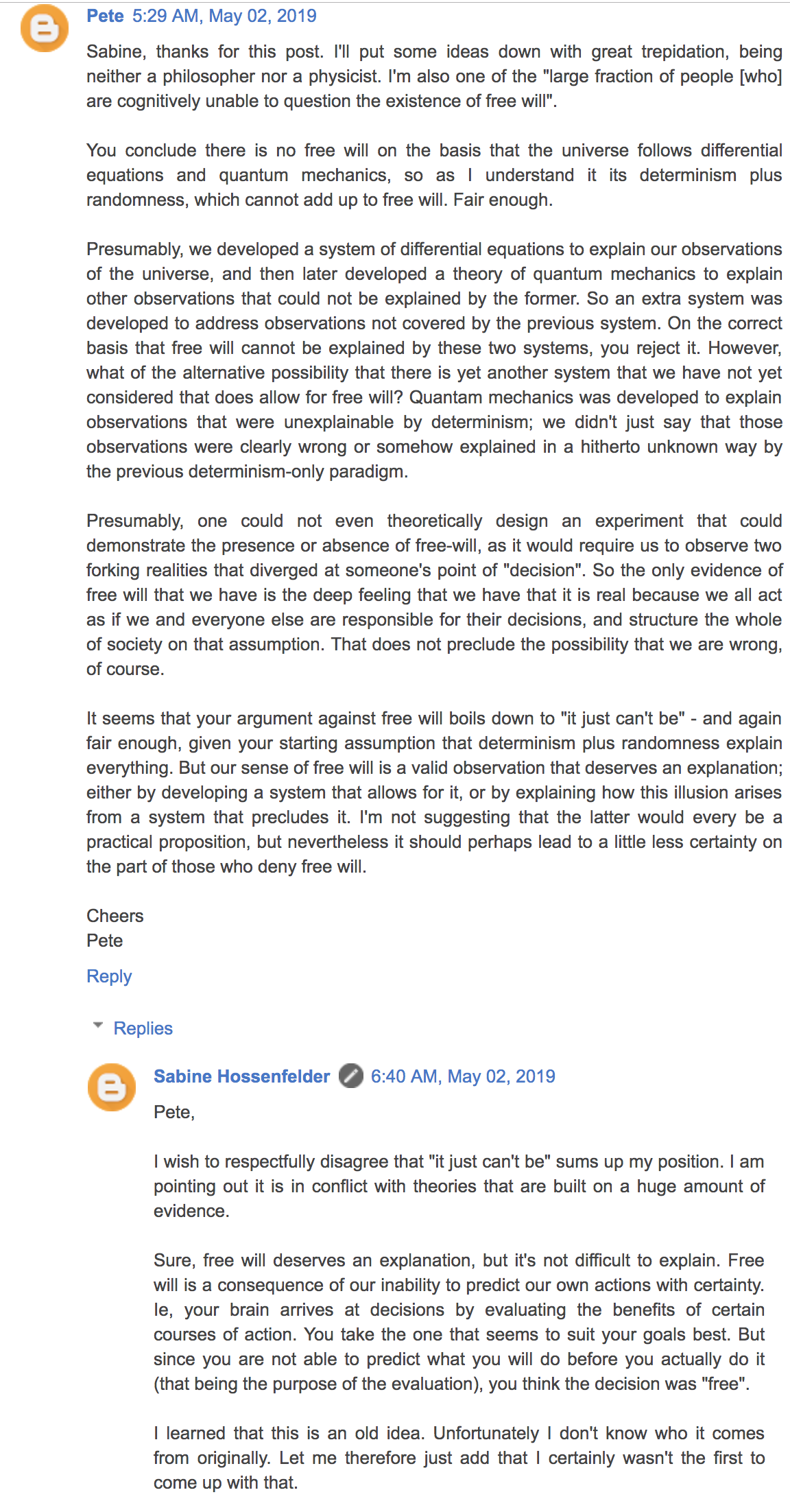 This conclusion that free will doesn’t exist is so obvious that I can’t help but wonder why it isn’t widely accepted. The reason, I am afraid, is not scientific but political. Denying free will is considered politically incorrect because of a wide-spread myth that free will skepticism erodes the foundation of human civilization.

For example, a 2014 article in Scientific American addressed the question “What Happens To A Society That Does not Believe in Free Will?” The piece is written by Azim F. Shariff, a Professor for Psychology, and Kathleen D. Vohs, a Professor of Excellence in Marketing (whatever that might mean).

In their essay, the authors argue that free will skepticism is dangerous: “[W]e see signs that a lack of belief in free will may end up tearing social organization apart,” they write. “[S]kepticism about free will erodes ethical behavior,” and “diminished belief in free will also seems to release urges to harm others.” And if that wasn’t scary enough already, they conclude that only the “belief in free will restrains people from engaging in the kind of wrongdoing that could unravel an ordered society.”

To begin with I find it highly problematic to suggest that the answers to some scientific questions should be taboo because they might be upsetting. They don’t explicitly say this, but the message the article send is pretty clear: If you do as much as suggest that free will doesn’t exist you are encouraging people to harm others. So please read on before you grab the axe.

In fact, as I’ve written before (see here), there is no evidence whatsoever—earlier “evidence” from lab studies hasn’t been replicated—that denying free will has any bad effects on either your psyche or society.

99 thoughts on “Sabine Hossenfelder on why we don’t have free will, but why many still insist on it”