The other day, theoretical physicist Marcelo Gleiser of Dartmouth College won the £1 million Templeton Prize for “affirming life’s spiritual dimension.” At the time I used his quotes reported by the media to show that, while Gleiser may be a good physicist, he’s not exactly the sharpest knife in the drawer when it comes to talking about atheism and “the limits of science.”

This is all confirmed in a new Scientific American interview with Gleiser conducted by Lee Billings, an associate editor who writes about cosmology and physics. Read on, but don’t waste a lot of time:

It’s the usual pap espoused by scientists who are also “spiritual” in the way Templeton likes: touting the limitations of science, saying there are other ways to answer the Big Questions, and, especially, dissing atheism.

One of the most disingenuous parts of the interview, and a sure sign of thoughtless accommodationism, is the call for “humility.” Of course, that call applies only to atheists and scientists, not to believers:

[Billings] Right. So which aspect of your work do you think is most relevant to the Templeton Foundation’s spiritual aims?

[Gleiser] Probably my belief in humility. I believe we should take a much humbler approach to knowledge, in the sense that if you look carefully at the way science works, you’ll see that yes, it is wonderful — magnificent! — but it has limits. And we have to understand and respect those limits. And by doing that, by understanding how science advances, science really becomes a deeply spiritual conversation with the mysterious, about all the things we don’t know. So that’s one answer to your question. And that has nothing to do with organized religion, obviously, but it does inform my position against atheism. I consider myself an agnostic.

It always sounds good to tout “humility”, doesn’t it? The thing is, scientists are already humble, because we’re forced to be. Yes, there are arrogant scientists (Lynn Margulis comes to mind), but as far as practicing science goes, you’re always looking over your shoulder asking “What if I’m wrong?” “How can I make sure that there are no flaws in my work that others might see?” You don’t become famous by being loud (although sometimes that helps); you become famous by being right. And the more arrogant you are, the more likely others are to replicate your work.

Do you know this famous quote by Thomas Henry Huxley?

“Sit down before fact like a little child, and be prepared to give up every preconceived notion, follow humbly wherever and to whatever abyss Nature leads or you shall learn nothing.”

Gleiser’s double standard for humility becomes clear when he goes after atheism but doesn’t go after believers:

Why are you against atheism?

I honestly think atheism is inconsistent with the scientific method. What I mean by that is, what is atheism? It’s a statement, a categorical statement that expresses belief in nonbelief. “I don’t believe even though I have no evidence for or against, simply I don’t believe.” Period. It’s a declaration. But in science we don’t really do declarations. We say, “Okay, you can have a hypothesis, you have to have some evidence against or for that.” And so an agnostic would say, look, I have no evidence for God or any kind of god (What god, first of all? The Maori gods, or the Jewish or Christian or Muslim God? Which god is that?) But on the other hand, an agnostic would acknowledge no right to make a final statement about something he or she doesn’t know about. “The absence of evidence is not evidence of absence,” and all that. This positions me very much against all of the “New Atheist” guys—even though I want my message to be respectful of people’s beliefs and reasoning, which might be community-based, or dignity-based, and so on. And I think obviously the Templeton Foundation likes all of this, because this is part of an emerging conversation. It’s not just me; it’s also my colleague the astrophysicist Adam Frank, and a bunch of others, talking more and more about the relation between science and spirituality.

I’ve already discussed this cockeyed view.  The idea that atheism is “belief in nonbelief” is a Deepity, for it sounds profound but upon examination proves shallow and, indeed, stupid. Atheists don’t “believe in nonbelief”: they reject acceptance of gods because there is no evidence for gods. That’s all there is to it, and, contra Gleiser, it’s absolutely consistent with the scientific method. In fact, the refusal to accept “truths” when there’s no evidence for them is the hallmark science—although there is no formal “scientific method.”

In contrast, Gleiser’s own agnosticism is simply a chickenshit way to avoid conclusions that he’d draw in any other area of science. If one posits that there are aliens living on Mars, but we find no evidence of them after repeated scans of the planet, and no signs of life from sending up biological probes, then you’re being unscientific. As Vic Stegner used to say, “The absence of evidence is evidence of absence—if that evidence should be there.”

As I wrote in Faith Versus Fact:

In science, if there should be evidence for a phenomenon but that evidence is consistently missing, one is justified in concluding that the phenomenon doesn’t exist. Examples are the Loch Ness Monster and Bigfoot, as well as paranormal phenomena like ESP or telekinesis. Seeking evidence for such things, the skeptics always come up dry. It is the same with God, though theologians will object to comparing God to Bigfoot. The philosopher Delos McKown had a more parsimonious answer for God’s absence: “The invisible and the non-existent look very much alike.

And I said this after examining Barbara Forrest’s convincing argument that the success of methodological naturalism implies an underlying philosophy of philosophical naturalism (i.e., “there are no gods”):

Although Forrest wrongly implies that science can’t examine the supernatural, her overall argument makes sense. If you spend your life looking in vain for the Loch Ness Monster, stalking the lake with a camera, sounding it with sonar, and sending submersibles into its depths, and yet still find nothing, what is the more sensible view: to conclude provisionally that the monster simply isn’t there, or to throw up your hands and say, “It might be there; I’m not sure”? Most people would give the first response—unless they’re talking about God.

Gleiser’s agnosticism is of the second variety.

It’s quite curious, but understandable, that while Gleiser says that “I have no evidence for God or any kind of god,” he still says he’s an agnostic, and at the same time goes after atheists while keeping his mitts off of religionists. After all, it is the religionists who believe in stuff without any evidence, and Gleiser implicitly admits that. So why does he call out atheists but not believers? The answer is one word: Templeton.

Finally, what are the limits of science? Clearly they involve things that science can’t address because they involve issues not resolvable by empirical examination. Those issues are fewer than we think (for instance, science might be able to provide answer to “why do we find some things beautiful and other things repulsive?”), but we already know that science can’t fully resolve issues of subjective preference—like moral questions. If you decide what your moral preferences are (e.g., “it is best to maximize well being”), then you can approach the question empirically: what actions do maximize well being? But if that’s not your goal, and you have some other subjective morality (e.g., “abortion is immoral because it involves murder”), then science can’t answer that. (I do point out, though, that if the anti-abortion argument rests on the existence of a unique soul in humans, science might be able to tackle that.

I know very few scientists who would say that science can answer every question. It can’t, and sometimes we need clear-thinking input from philosophers and those trained to think logically. So when Gleiser emits the following bromides, I’ll just note that secular humanism, with no need for woo or “spirituality”, would arrive at the same conclusion:

. . . But let me play devil’s advocate for a moment, only because earlier you referred to the value of humility in science. Some would say now is not the time to be humble, given the rising tide of active, open hostility to science and objectivity around the globe. How would you respond to that?

This is of course something people have already told me: “Are you really sure you want to be saying these things?” And my answer is yes, absolutely. There is a difference between “science” and what we can call “scientism,” which is the notion that science can solve all problems. To a large extent, it is not science but rather how humanity has used science that has put us in our present difficulties. Because most people, in general, have no awareness of what science can and cannot do. So they misuse it, and they do not think about science in a more pluralistic way. So, okay, you’re going to develop a self-driving car? Good! But how will that car handle hard choices, like whether to prioritize the lives of its occupants or the lives of pedestrian bystanders? Is it going to just be the technologist from Google who decides? Let us hope not! You have to talk to philosophers, you have to talk to ethicists. And to not understand that, to say that science has all the answers, to me is just nonsense. We cannot presume that we are going to solve all the problems of the world using a strict scientific approach. It will not be the case, and it hasn’t ever been the case, because the world is too complex, and science has methodological powers as well as methodological limitations.

How you prioritize things like the value of lives versus the value of cars can be largely a subjective weighing of issues, but even then science can help resolve these questions once you specify an desirable trade-off between dollars and lives or dollars and convenience.  So no, science can’t by itself solve “all the problems of the world”. But it’s a damn sight better than religion in solving the problems of the world! Again, it’s understandable that Gleiser directs his ire at science and not religion. Why not indict Catholicism for saying it not only didn’t help solve the AIDS crisis, but made it worse? As Rebecca Goldstein told me, “Moral philosophy is a throughly secular enterprise.”

Gleiser is a Templeton flack, and I have nothing but contempt for his disingenuous attacks on atheism and science. Well, if he’s not disingenuous, he’s a very sloppy thinker.

Finally, why did Scientific American publish this article? The magazine is supposed to be about science, not science and woo. And the article is misleading and irrelevant, appealing only to believers who want to think their faith is consistent with science.

Here’s a photo of Gleiser from Australia’s Eternity News, which also had the headline below his photo: 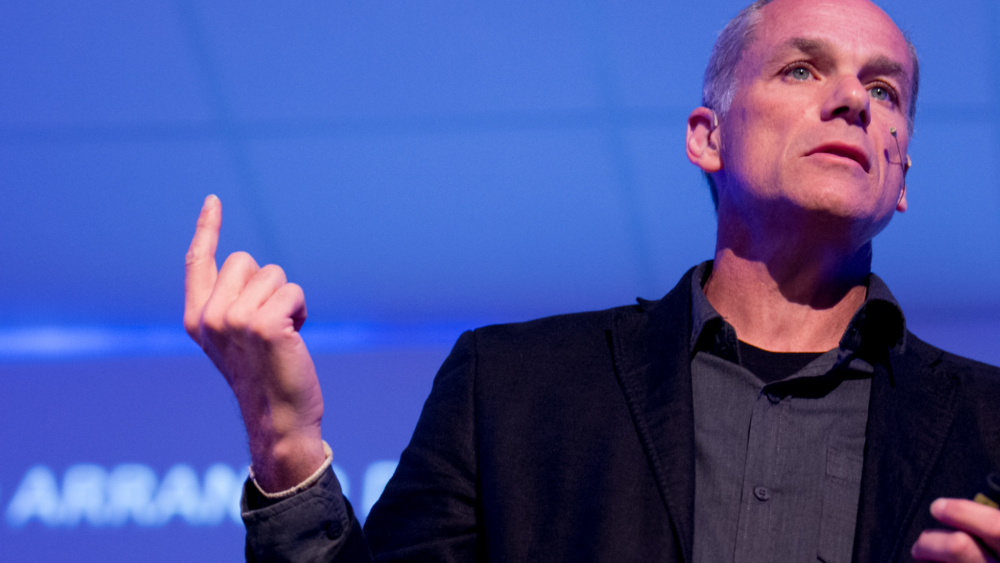 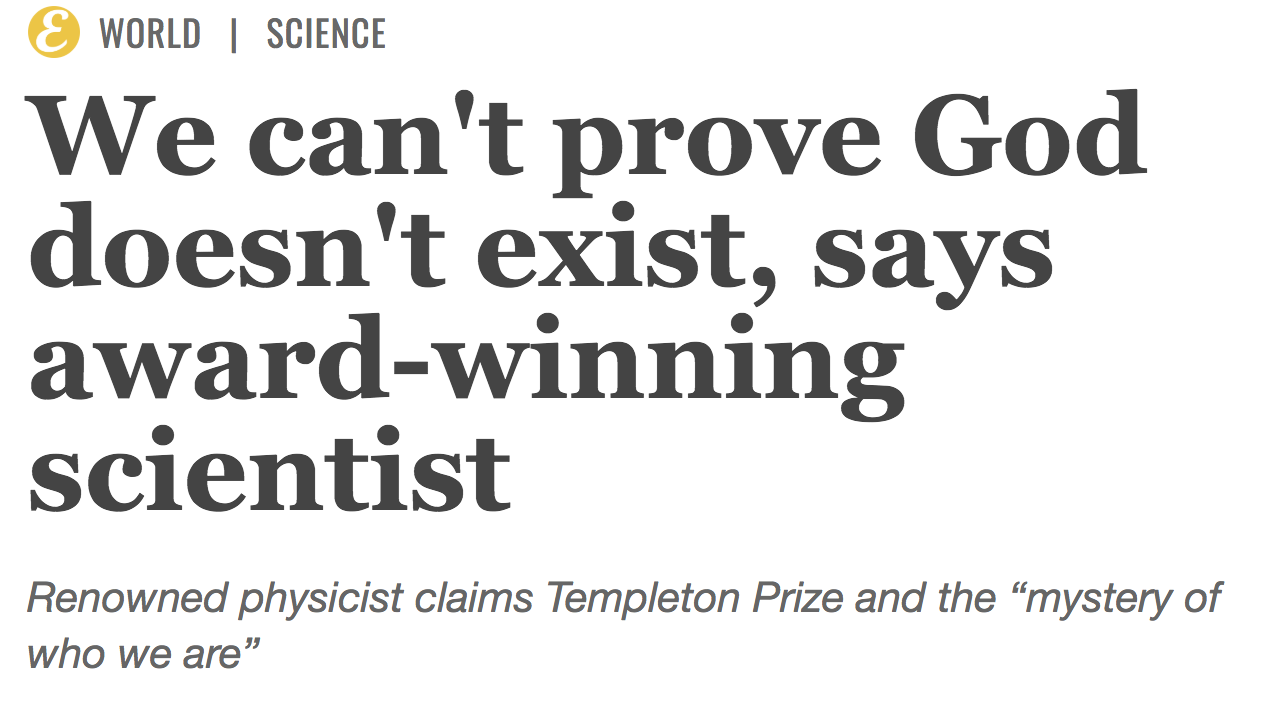