There’s nothing that can debunk stupidity or irrationality more strongly than satire. And that’s why, as “wokeness” floods across college campuses then spills into the workplace as members of the Offense Culture graduate, Titania McGrath, through her tweets and now in an upcoming book, has shown up the craziness of that culture. And she’s done it by pretending to be one of The Woke. She did it so effectively, even on Twitter, that she was accepted as one of them and demonized by the Right and those reasonable Leftists who didn’t get the joke.

But who was she/he/hir/it/zir? Everybody knew that Titania (and her “male” counterpart Godfrey Elfwick) were pseudonyms, but who had a sense of humor that good?

Well, as revealed in the two pieces below, one from Spiked and the other from the Torygraph, Titania is none other than Spiked columnist and humorist Andrew Doyle.

The Spiked column is not only funny, but incisive in indicting Woke Culture, and I recommend you read it. An excerpt (my emphases):

Last April, I decided to set up a satirical account on Twitter under the guise of radical intersectionalist poet Titania McGrath. She’s a po-faced young activist who, in spite of her immense privilege, is convinced that she is oppressed. She’s not a direct parody of an existing individual, but anyone who regularly reads opinion columns in the Guardian will be familiar with the type. Given that such individuals are seemingly impervious to reason, and would rather cry ‘bigot’ than engage in serious debate, satire seemed to be the only option.

The obsession with victimhood from predominantly bourgeois political commentators is something I have always found inherently funny. It’s a phenomenon that has been amplified to a great extent by social media. This extremely vocal minority of activists enjoy pontificating to the masses from their online lectern, berating those who fall short of their moral expectations, and endlessly trawling through old tweets in the hope of discovering a misjudged phrase or sentiment that could justify a campaign of public shaming. In their eyes, there is no possibility of redemption. The most vicious remarks you’ll find on social media come from the racist far right and woke intersectionalists. They are two heads of the same chimera.

American physicist Steven Weinberg famously remarked that ‘with or without religion, good people can behave well and bad people can do evil; but for good people to do evil – that takes religion’. It makes sense, then, to think of the social-justice movement as a kind of cult. Its members are generally decent people with good intentions. They have an unshakeable certainty that their worldview is correct. They feel the need to proselytise and convert as many of the fallen as possible. And even though they are capable of the most horrendous dehumanising behaviour, they think they are the good guys.

We are in this position because identity politics in its current form is a collectivist ideology. It does not value an individual for the content of his or her character, but instead makes prejudicial assessments on the basis of race, gender and sexuality. In the name of anti-racism, identity politics has rehabilitated racial thinking. This explains why an affluent and privileged person like Munroe Bergdorf can be invited on to national television to proclaim that ‘the white race is the most violent and oppressive force of nature on Earth’. How is well-intentioned racism even a thing?

A similar regression has occurred within the feminist movement. Fourth-wave feminism is predominantly victim-centred, and is based on the conviction that women are invariably oppressed and require the protection of authority figures. When the BBC promoted a smartphone app to help women speak up in meetings, it was merely toeing the standard feminist line on the intrinsic fragility of women. So we are left with the curious phenomenon of good people who are opposed to misogyny. subscribing to an essentially misogynistic perspective. [JAC: This is also seen in the valorization of the misogyny of Islam, and of wearing the hijab.]

Can you disagree with a word of that?  Here’s Doyle (right) with his alter ego: 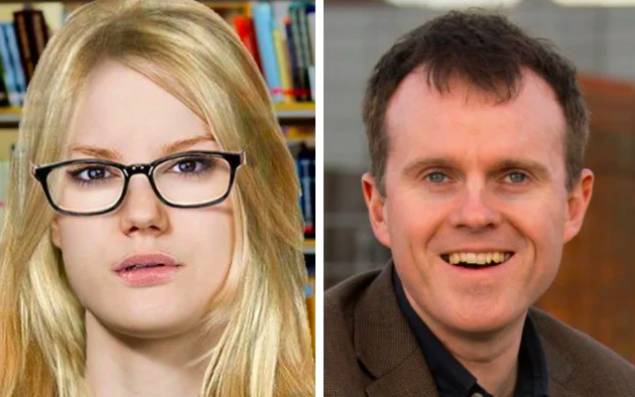 Doyle also reveals who is half of Elfwick (I suspect the other half was Doyle himself):

Titania was an attempt to highlight the inescapable hypocrisies of such a mindset. I was inspired by the brilliant work of the satirist Lisa Graves, who was one half of the Twitter persona Godfrey Elfwick. Although often accused of ‘punching down’ at vulnerable minorities, the actual target of Elfwick’s satire was the woke establishment. It was inevitable that he should be banned by Twitter, because those in power cannot tolerate being ridiculed.

The Torygraph adds that Doyle is a former private school teacher, is 40 years old, and has a doctorate in Early Renaissance Poetry from Wadham College, Oxford. His studies gave rise to Titania’s name, which comes from the queen of the fairies in Shakespeare’s A Middsummer Night’s Dream. As Doyle explains, McGrath got her/his/hir/its name because “all of this ‘woke culture’ is an utter fantasy world.”

Doyle told the Torygraph this:

“This social justice movement is full of people who are arrogant, narcissistic and very certain in themselves. The very idea that they could be wrong doesn’t even cross their mind. That to me is incredibly funny. I thought Titania could embody all of that.

“The majority of people are desperate for this culture to be mocked. [Titania’s] account has become so popular because people are sick of feeling that they can’t say what they want. It used to be the case that if someone spoke out of turn, you would say that’s a bit much, apologise and everyone would move on. Now you post a screenshot on Twitter and try to get someone fired.

“Titania is staying the stuff that most people want to say.”

Finally, the Torygraph presents a selection of Titania’s best tweets: 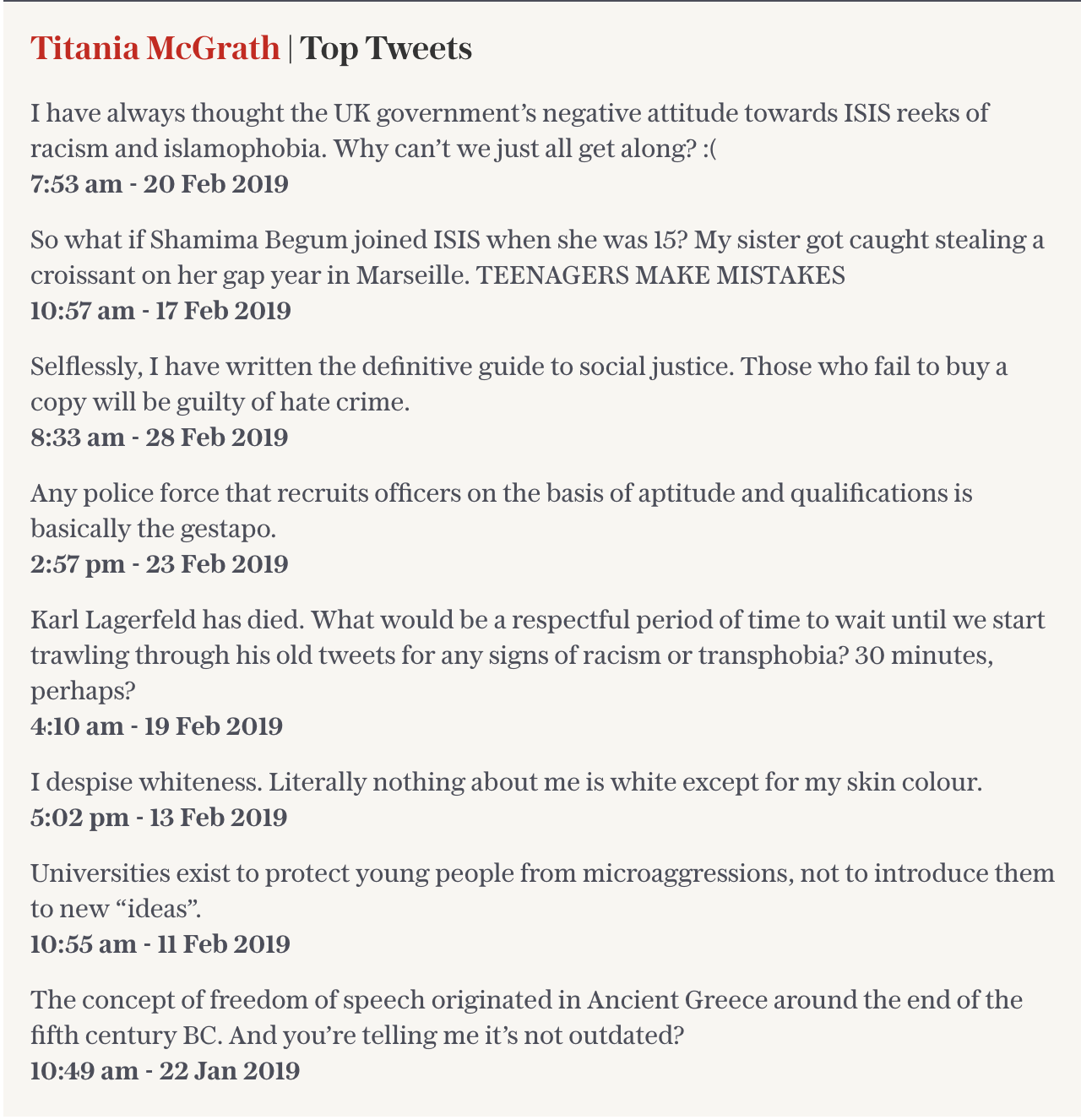