Several species of animals, including damselflies, are known to remove sperm—presumably from previously-mating males—before they ejaculate their own sperm into a female. (Damselfly males have a “penis scoop” for this purpose; see photo at bottom.) This removal is a prime example of male-male competition, which is a form of sexual selection that doesn’t involve female preference.

It’s been known for a while that some species of nudibranchs, gorgeous marine molluscs that lack shells, also remove sperm with spiny penises during copulation. These species, also known as “sea slugs”, are simultaneous hermaphrodites, so when they copulate, each individual both donates sperm to its partner and receives sperm in its own female bits. (They do not fertilize themselves).

In a new paper in the Journal of Ethology (click on screenshot below to see the free paper, and get the pdf here), Ayami Skiezawa et al. did something new: they did DNA analysis on the removed sperm to see if it actually did come from males who mated previously. After all, it could be a male’s own sperm instead of sperm from a competitor.

But first, the system. The species studied was Chromodoris reticulata, a lovely nudibranch found in tropical and subtropical waters of the western Pacific Ocean.  It’s shown in the first photo below, which also shows how nudibranchs, which means “naked gills” get their name. (All photos and their captions are from a 2013 article by Ed Yong in National Geographic.)

Here’s copulation between two individuals; you can see that each one insinuates a thin penis into the female organs of the other:

The penis is covered with backwards-pointing spines that are covered with entangled sperm after copulation. The odd bit about this species is that the penis is self-amputated (“autotomized”) about twenty minutes after mating, and it simply grows a new willy, ready for copulation within a day.

The new paper, below, went a step forward from the morphological observations in damselflies and in the earlier paper cited above: it did genetic analysis of the removed sperm.

It turns out that while earlier work showed clearly that penises like this one removed sperm after copulation, it wasn’t absolutely clear that this sperm was that of males who had mated previously. While such removal would clearly be advantageous, leading the remover to have more offspring than he (I’m referring to the male bits) would have had otherwise, the notion that this was what was happening was based on looking at the amount of sperm in the female parts before copulation versus after removal (presumably in these cases ejaculation was prevented). It would be better to actually look at the genes in the sperm itself to see if the nudibranch was removing sperm from other males.

And that’s what Sekizawa did, and that’s what they found. They put nudibranchs, captured off Okinawa, in tanks and then gave them each three successive mating partners over a series of days. Each partner’s genetic constitution was determined using six microsatellite markers (bits of DNA). And after each copulation, they removed the sperm mass adhering to the spiny penis and looked at the genes in that sperm. This is a simple idea, but it’s important to do this kind of analysis so you can see what’s really happening.

The results were crystal clear: in 36 sperm clumps taken from postcopulatory penises, 28 had genes from nudibranchs who had deposited sperm in the mating partner in an earlier mating. Indeed, in some individuals they found sperm that didn’t match any of the nudibranchs who had mated with the partner; this might have been from individuals who mated with the focal nudibranchs before they were taken from the wild. They also found some genes from the mating partner itself, probably from bits of tissue adhering to the spiny penis. And in some cases sperm from at least two previous mating partners was found.

This pretty much finalizes our understanding of this phenomenon, at least in this species of nudibranch. There’s little doubt of the selective advantage that accrues to an individual who removes sperm from a previous mating partner: you get more offspring than you would have had otherwise.

One question remains, though: why do these things self-amputate their penises after each mating? The authors suggest an answer (my emphasis):

C. reticulata autotomizes its penis after every copulation (Sekizawa et al. 2013) and it is thought that the autotomy of the penis evolved to remove allo-sperm from the mating partner efficiently. We clarified in this study that sperm donors removed allo-sperm already stored in the copulatory pouch(es) of sperm recipients with backward-pointing spines on the penis as the final process of their copulation. Though a long and thorny penis is advantageous in scraping out allo-sperm at copulation, such a penis is difficult to pull back into the body again after copulation. And the backward-pointing spines on the penis covered with sperm at copulation will not remove allo-sperm efficiently at the next copulation, like a  VelcroTM tape. Such morphological and functional inconveniency may have made C. reticulata develop a cheap and fragile penis and dispose of it, rather than a robust but expensive one and reuse it.

Just for fun, here’s how damselflies do it. This figure, showing the damselfly penis with a glop of sperm, presumably from a male who mated to the female previously, is from a paper by Jon Waage. “sm” refers to the sperm mass adhering to the penis, also bearing backward-pointing spines. This spiny morphology and its function are remarkable examples of convergent evolution in two distantly related groups, insects and molluscs.  This photo comes from Jon Waage’s Researchgate page; Waage, now a professor emeritus at Brown University, is the one who made this remarkable finding 35 years ago. 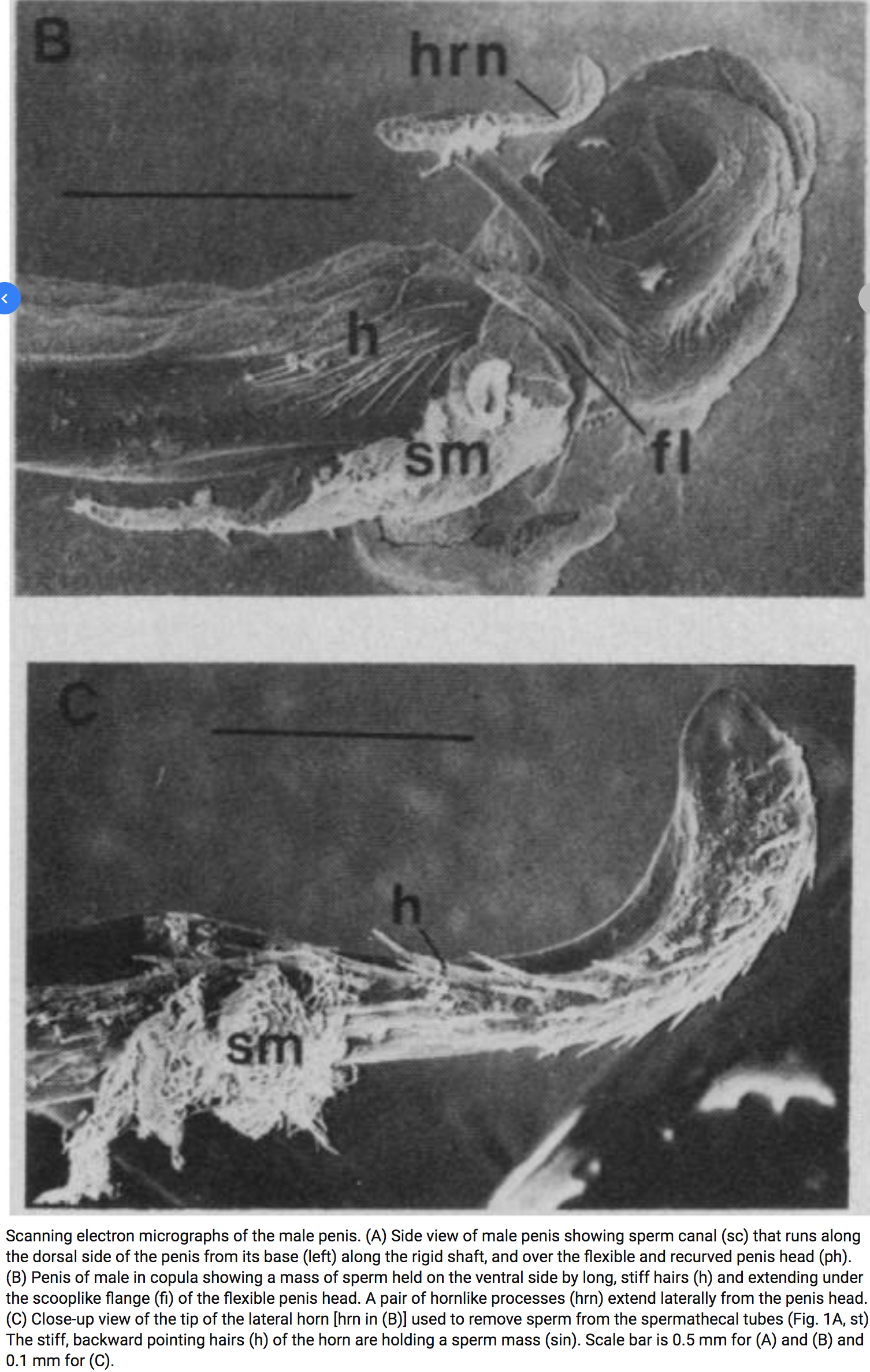