Three articles bashing New Atheism have recently been published (here, here, and here). I already criticized the Guardian piece, and am not going to waste my time on the others. After all, we know the tropes, which have been repeated ad infinitum: New Atheism used to be a lively and going concern, then four old white men (Dennett, Dawkins, Hitchens, and Harris [who’s not old]) arrogantly proclaimed themselves leaders of the movement, with at least three of those men being bigoted and/or misogynistic, as well as adherents to the alt-right (Dennett manages to escape those labels). That, goes the narrative, drove people away from New Atheism, an egress that could have been avoided if New Atheism had properly aligned itself with social justice. Now, because of the fault of its leaders and its rejection of wokeness, New Atheism is dead.

I don’t agree with this narrative on several grounds. Dennett, Dawkins, Hitchens, and Harris never proclaimed themselves “leaders of New Atheism”. They became spokespeople for atheism because they all had bestselling books and were also eloquent speakers.  They are not bigots or misogynists, though I admit that Dawkins was sometimes hamhanded in his use of Twitter. And it’s not that I don’t call out misogyny or sexual misconduct when I’m convinced that it has occurred, for I’ve done that with one “big name” among New Atheists. Further, my take on New Atheism was that it wasn’t really “new”, but a revival of old ideas suggested (often vigorously) by earlier nonbelievers like Ingersoll, Mencken, Russell, and Sagan. The only “new” aspect was that it was a revival of atheism offered to a new generation, and perhaps had a more intimate connection with science than previous incarnations. (A reader below suggests, correctly, I think, that these ideas were spread more widely because of the rise of the Internet.)

Finally, I don’t believe that “New Atheism” or its proponents are more bigoted, sexist, or “alt-right”ish than any other group of educated people. In fact, I think they’re less so. Yes, of course there will be some atheists who are sexists or bigots. No large barrel is free of such bad apples. But, at least in my experience, I haven’t seen the pervasive bigotry that’s supposedly associated with New Atheism—either at meetings or among prominent New Atheists, some of them friends with whom I’ve spent a lot of time. Anecdotes simply don’t make the case that New Atheism is palpably afflicted with these problems.

Of course one bigot and one incident of sexism is too many, and we should always strive to call this stuff out and treat people equally, but I don’t see these issues as especially prominent in New Atheism, nor do I think that bigotry and conservativism have driven many people away from the “movement”—if it is indeed a movement. Rather, the New Atheists had their say in the four books, which all sold well, their publication lit a fire that helped promote secularism in the West and elsewhere, and that fire is still burning and consuming belief. New Atheism isn’t dead; it’s just becoming a mainstream idea. (I’ll add that I’ve never heard anybody say, “Well, I’m going back to religion because I didn’t like Dawkins’s last tweet.”)

When I looked at those three articles again, dosing myself liberally with Pepto-Bismol as a palliative, I decided to email four people and ask them, without responding to the articles’ accusations, to tell me if they thought that the thesis of the articles was right—that is “Is New Atheism dead?” I’ve gotten three responses (well, 2.5), and haven’t yet heard back from the fourth person. Here are the responses, which I have permission to publish (and thanks to the responders):

Steve Pinker was not one of the “Four Horsemen”, but he’s certainly seen as a prominent New Atheist. Here’s his response:

The entire concept of a “New Atheism movement” comes from defensive defenders of religion. I think of it not as a movement but as the overdue examination of an idea: Does a supernatural deity exist, and should our morality and politics be shaped by the belief that it does? For various reasons—the intrusion of theo-conservatism during the presidency of George W. Bush, the rise of militant Islam, an awareness of the psychological origins of supernatural beliefs, sheer coincidence—a quartet of books appeared within a span of two years, and pattern-spotters invented a “New Atheist Movement.” (I would not downplay coincidence as the explanation—random stochastic processes generate clusters of events by default.) Judged by degree of belief, the “new atheism” is not only not dead but it is winning: every survey has shown that religious belief is in steep decline, all over the world, and the dropoff is particularly precipitous across the generations, as compared to just drifting with the zeitgeist or changing over the life cycle. This is reflected in laws and customs—homosexuality is being decriminalized in country after country, for example. These trends are masked in the public sphere by two forces pushing in the opposite direction: religious people have more babies, and religious communities turn out in elections and vote in lockstep for the more conservative candidate. If the “new atheist” message of Christopher Hitchens et al. was “Atheists should have more babies,” or “Atheists should form congregations and vote en masse for the same candidate,” then yes, it was an abject failure. But if it is “The evidence for a supernatural being is dubious, and the moral norms of legacy religions are often pernicious,” then it is carrying the day, or at least riding a global wave.

Dan Dennett is one of the “Horsemen”, and he answered briefly.

We have said our piece, and the tidal wave of those abandoning religion keeps rolling on, growing and spreading, without any need of further encouragement from us. That’s how reason works: once you’ve said something true and persuasive, you don’t have to keep saying it again and again.  Our critics keep writing books and articles by the hundreds that disappear without a trace after a few days, convincing few if any. We’ve gone on to other topics.

Richard Dawkins said he wasn’t keen on responding to all these attacks (though I didn’t ask people to respond directly), and so I asked him if he had any answer to the claim that New Atheism is dead. He simply sent me a figure showing the UK sales of The God Delusion between 2006 and 2018, noting that the recent trend seems to be a pretty straight line. That also seems true, he noted, for American sales, though he didn’t have the exact figures. I also learned that there have been 13 million downloads (3 million in Saudi Arabia alone) for an illicit pdf of the Arabic translation of The God Delusion.

Here’s the graph I got (crikey, I wish I could sell a million books in the UK!) 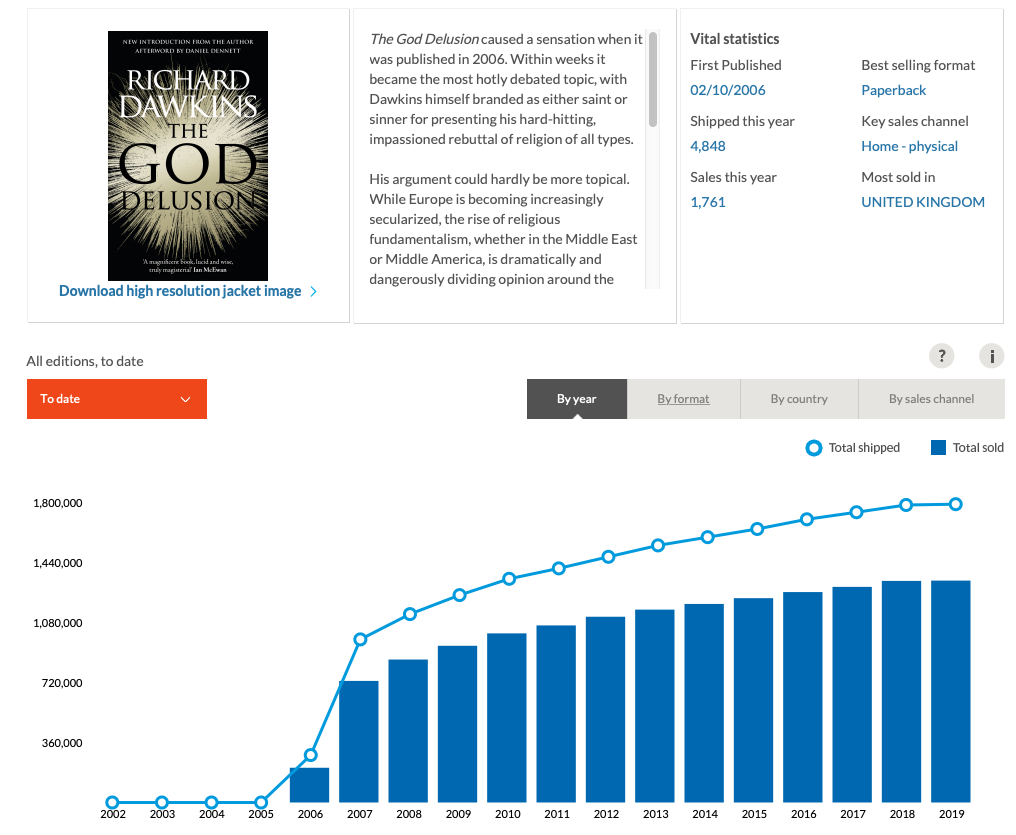 When I asked Richard if he wanted to say anything else besides showing that figure, he just noted that there were at least 22 books (which he calls “fleas”) that were provoked by publication of The God Delusion, and sent me a picture of some of the “fleas”—adding that the name comes from a line in a poem by W. B. Yeats: “But was there ever a dog that praised his fleas?” 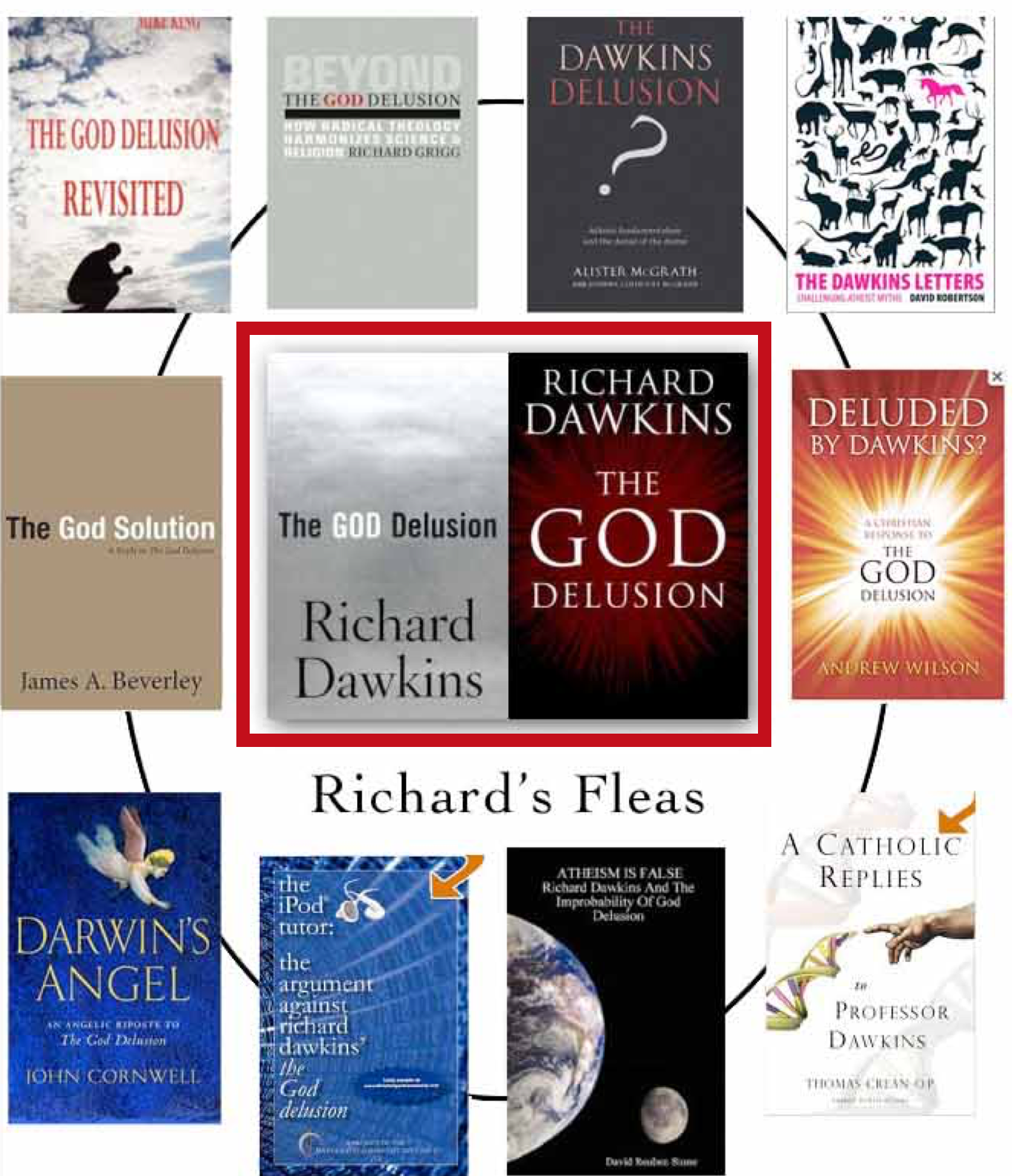 My own take on the fleas is that they show that New Atheism was and is effective, and frightened the faithful into these many responses.  I’ll add that these books seem to have sunk without a trace: none, as far as I know, have achieved anywhere near the sales of The God Delusion.

So there you have it. I may survey some other prominent people associated with New Atheism and get their take as well. Watch this space.

But there’s one more question. Why do these atheist-bashing articles, which are all the same, keep appearing over and over again when New Atheism already made its mark and its major proponents have moved on to other issues? I’m not sure, and readers may want to weigh in.

I think some of the bashers are motivated by jealousy or hatred, others by the desire to get an article in a public place (liberal websites are always glad to bash atheism, even if nearly identical articles were published elsewhere), and some people may really feel that New Atheism is ridden with alt-rightism and bigotry, though I disagree. I invite you to respond below.

Addendum: I heard this evening from Sam Harris, and has put his response (“no”) in a new post, but am adding it here for completeness. We now have all surviving Horsepersons weighing in, as well as Steve Pinker. Sam’s take:

I’ve always been skeptical about the utility of identifying as an “atheist,” because it rarely seems helpful to heap the false assumptions that surround this term upon one’s own head. For this reason, I’ve never been eager to wear the label “new atheist” either.
However, there was something genuinely new about the “new atheism.” The publication of our four books in quick succession moved the conversation about faith and reason out of rented banquet halls filled with septuagenarians and brought it to a mainstream (and much younger) audience. The new atheists also made distinctions that prior atheists tended to ignore: For instance, not all religions teach the same thing, and some are especially culpable for specific forms of human misery. We also put religious moderates on notice in a new way: These otherwise secular people who imagine themselves to be on such good terms with reason are actually abetting the forces of theocracy—because they insist that everyone’s faith in revelation must be respected, whatever the cost.
The new atheism has not disappeared. It has merely diffused into a wider conversation about facts and values. In the end, the new atheism was nothing more than the acknowledgement that there is single magisterium: the ever-expanding space illuminated by intellectual honesty.