The recent article in Tablet, “Is the Women’s March Melting Down?” (answer: yes), which revealed the anti-Semitism infusing the Women’s March (WM) leaders, as well as the resistance of women who reject that, may be a watershed moment for the Authoritarian Left. For once Leftists have pushed back against a group of women who demonize Jews and Israel in favor of Palestinians, whose own government is oppressive against gays, women, apostates, and, well, you name it. The women who called for WM leaders Sarsour, Mallory, and Perez to step down (they won’t, of course), were saying that they needn’t condone anti-Semitism to be progressive: women can stand together against the oppression of all women, no matter their ethnicity, color, or faith. I find that heartening.

Now the two articles below (from NBC News and PuffHo respectively) report not just that the Women’s March in Chicago has been canceled (their avowed reason involved financial and logistic difficulties), but that the smaller Women’s March in Eureka, California decided not to march because there was a dearth of people of color.

Organizers announced Friday that the Women’s March would not take place in Eureka, in Humboldt County, California, on Jan. 19 as previously planned due to issues of representation.

“Up to this point, the participants have been overwhelmingly white, lacking representation from several perspectives in our community,” a post on the march’s Facebook page read. “Instead of pushing forward with crucial voices absent, the organizing team will take time for more outreach.”

It’s not clear what’s going on here. There’s no indication that the Eureka WM leaders deliberately pushed minorities out of the way (Humboldt County is 74% white); instead they don’t seem to have been able, for whatever reason, to recruit minority women to the WM.

The problem, the organizers said, was that the group was “lacking representation from several perspectives in our community.” It said it hoped further outreach would add those “crucial voices.”

But if they tried and failed via outreach to get minorities to join in, why should they cancel the march? It doesn’t make sense.

Reader J. J., who sent me these links, raised some other possibilities:

Since you’ve been following the Women’s March, this latest cancellation is puzzling, to say the least.  The California march is being cancelled because it’s not diverse enough — mostly white people.  That’s just weird and smacks of some kind of crackpotism. I half wonder if it’s a cover story so the California organizers won’t have to deal with the real elephant in the room, the anti-semitism of the national organizers who hijacked it.  Even if it’s not, IMO it’s an unfortunate reason to cancel the march.  How many other activities and events should POCs shut down because predominantly white people engage in them?
At first I thought it was a hoax but it’s not.

I’m not sure that POC (people of color) shut down the Eureka March; to me, at least, that’s not clear, but it’s possible.
And now, reported by Townhall (and other, mostly conservative, sites), another cancellation that gives a real reason (click on screenshot):

The 2019 Women’s March in New Orleans was cancelled Saturday due, in part, to concerns over the national Women’s March leadership’s refusal to step down following allegations of anti-Semitism. The local chapter of the group had previously planned to hold its sister march on January 19th.

National Organization for Women’s Baton Rouge chapter, which had organized the 2018 Women’s March on New Orleans, explained the reasons for the cancellation in a Facebook post. 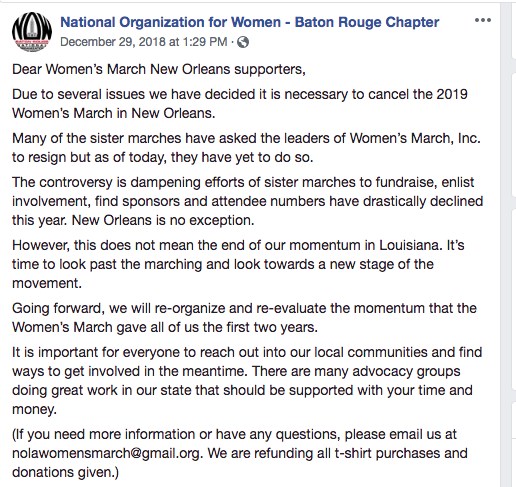 If this were Britain, Sarsour & Company would resign immediately seeing this as a big “vote of no confidence”, and realizing that their anti-Semitism and fractiousness have split apart what should have been a unified movement.

But they won’t resign. Mallory, Perez, and Sarsour simply can’t bear to step out of the spotlight, and their real agenda wasn’t mostly the welfare of women as a whole, but identity politics connected with their own groups, groups of “people of color” (Sarsour is manifestly not a person of color, but an American-born Muslim of Palestinian ancestry.) Sarsour, I believe, is also an Islamist, using the WM to further her real agenda of spreading Islam in America (she’s a BDS supporter and favors a “one-state” solution to the Israeli/Palestine conflict, which of course is a call for the extirpation of Israel). All three leaders are deeply wedded to power, power like they’ve never had before, and they don’t want to take their hands off the rudder. Yet there are capable women—women who don’t hate Jews—who are ready to take over.

To perdition with Perez, Mallory, and Sarsour. Any woman who marches under the banner of the Women’s March, Inc. (the parent organization, now being sued for trying to trademark the name) is a woman who implicitly condones anti-Semitism.

When I was on a California NPR show (I am guessing the station here) a few months before the first Women’s March, I said that I favored the cause but disliked the identity politics that infused the rhetoric of the March and its website. I was attacked by three other guests on the show, one of whom was a Women’s March organizer.

It turns out I was right. But I take no joy in that. I just wish that good Leftist causes, like women’s equality, weren’t being blown to bits by identity-politics infighting.

37 thoughts on “The Women’s March fragments even more”