Teresa Shook bills herself as “Founder of the Women’s March,” and there’s some justification for that according to the Wikipedia page on the 2017 Women’s March (the first one):

In November 9, 2016, the day after Donald Trump was elected President of the United States, in reaction to Trump’s election campaign and political views, and his defeat of female presidential nominee Hillary Clinton, Teresa Shook of Hawaii created a Facebook event and invited friends to march on Washington in protest. Similar Facebook pages created by Evvie Harmon, Fontaine Pearson, Bob Bland (a New York fashion designer), Breanne Butler, and others quickly led to thousands of women signing up to march. Harmon, Pearson, and Butler decided to unite their efforts and consolidate their pages, beginning the official Women’s March on Washington. To ensure that the march was led by women of differing races and backgrounds, Vanessa Wruble, co-founder, and co-president of Okayafrica, served as Head of Campaign Operations and brought on Tamika D. Mallory, Carmen Perez and Linda Sarsour to serve as National Co-Chairs alongside Bland. Former Miss New Jersey USA Janaye Ingram served as Head of Logistics. Filmmaker Paola Mendoza served as Artistic Director and a National Organizer.

I haven’t written much about Bob Bland (Bland is a woman whose real name is Mari Lynn Bland), for she hasn’t been on my radar since I’ve been following Sarsour, Perez and Mallory sucking up to Louis Farrakhan and praising cop-killers and terrorists. But Bland was among the four people whom, according to The Hill and other sources, Shook has asked to resign as co-presidents of the Women’s March.  Shook wrote a post on her Facebook page asking for Bland, Perez, Mallory, and Sarsour to step down and “let others lead who can restore faith in the Movement and its original intent.”

Shooks’s reasons are the same one that led Alyssa Milano and then Deborah Messing to separate themselves from the Women’s Movement: the connection of those who lead an supposedly intersectionalist movement with arrant anti-Semites and homophobes, and bigots against transgender people. 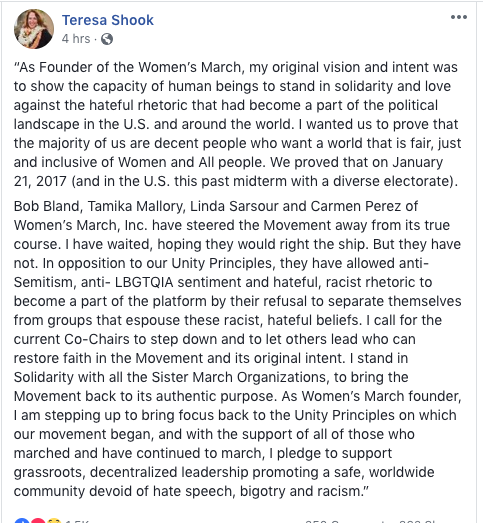 The Women’s March, Inc. is the big vehicle for Sarsour, Perez, Mallory and Bland to remain in the public eye and relevant, though I don’t doubt that in three of these people—I’m excluding the odious Sarsour—there is a real intent to remedy injustice and oppression against women of all stripes. (Sarsour, I think, is in it for her own political ambitions, her own self-aggrandizement, and perhaps to further an Islamist agenda). At any rate, I don’t expect any of these women to go gentle into oblivion. Sarsour, for one, would just go back to being, as she used to call herself, “an ordinary white girl.” Nothing special about that! And so the three have responded on the Women’s March Facebook page (click on screenshot below to go to the post): 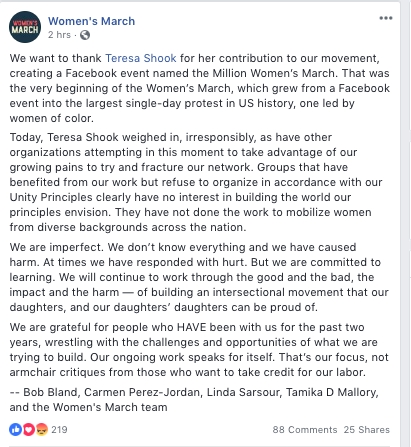 Here we see the usual response to criticism of the Women’s March: such criticism constitutes an irresponsible attack on women of color (isn’t it important that all women unite in the Women’s March?). And there’s no sign that these four are going to give up their jobs. However, their movement is splintering rapidly, and I think it unseemly that any women would march under a banner carried by Perez, Mallory, Sarsour, and Bland.

It becomes even worse because, as one site reports, the Women’s March, Inc. leaders are using Nation of Islam members as bodyguards as well as misusing the March’s funds.

This accusation comes not from some outside critic, but from Mercy Morganfield, a black woman who was past president of the Washington, D.C. chapter of the Woman’s March. Have a gander at her comment on Shook’s post below (click on screenshot to see the original). She accuses the co-Presidents of “traveling with a glam squad,” using a Nation of Islam detail as  security guards (if this is true, it partly explains the refusal of Sarsour, Perez, and Mallory to directly criticize Louis Farrakhan’s anti-Semitism and homophobia), of “flying their friends and family everywhere,” and staying in five-star hotels.

If these allegations are true—and the press should surely check on them—then all four co-Presidents should step down immediately (Morganfield wants six people to step down). 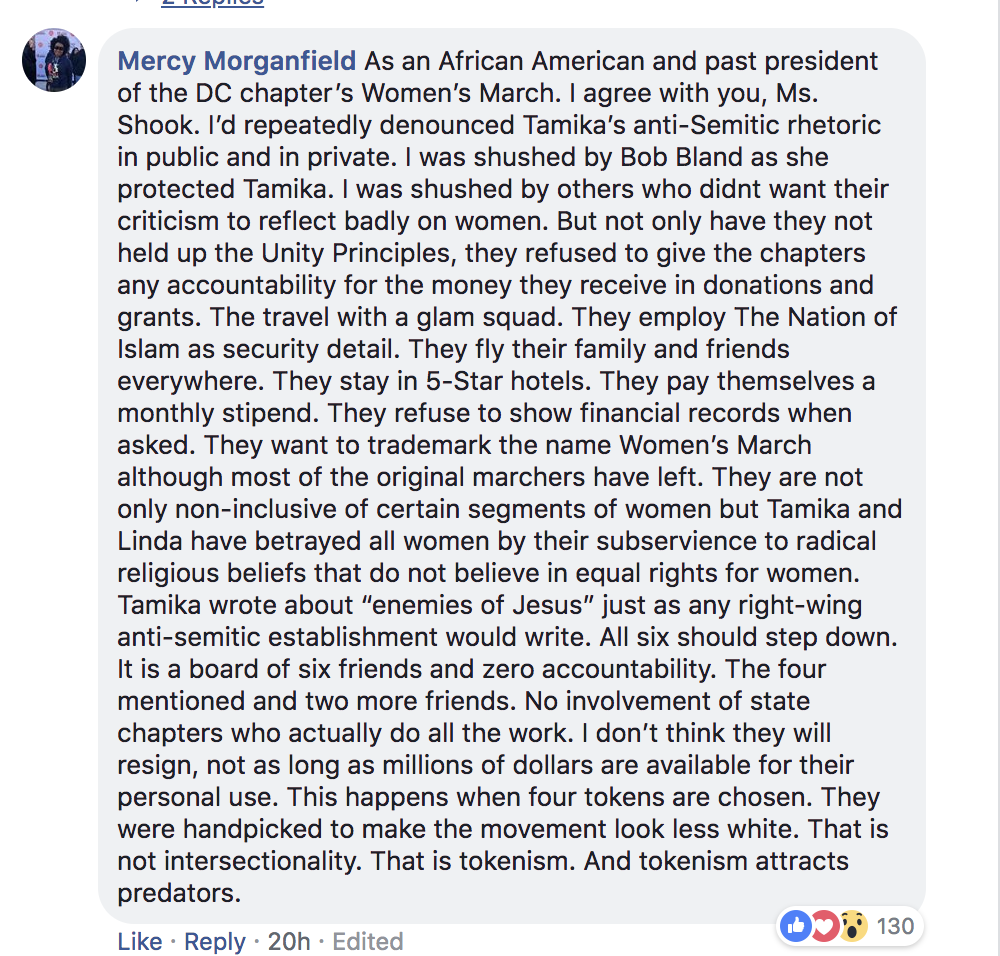 The most important allegation to check is Morganfield’s claim that Nation of Islam guards (perhaps the “Fruit of Islam” detail that guards Farrakhan as well) serve as security for the Women’s March. Given Farrakhan’s history of bigotry and the accusations that the Women’s March leaders are in bed with Farrakhan, this is a clear financial and moral conflict of interest. Perhaps some very weak evidence comes from the exchange below (“very weak” because it shows only that Sarsour has a security detail, though it doesn’t specify who they are). 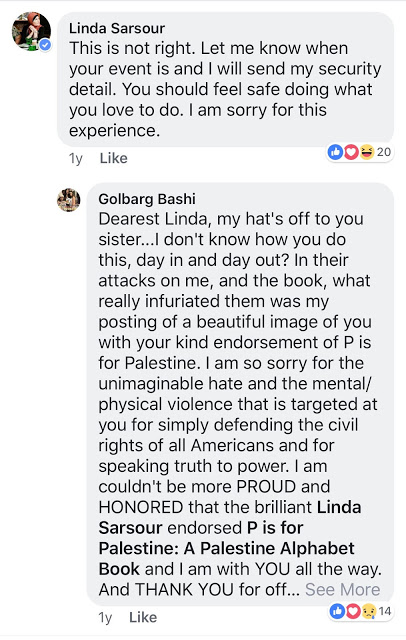 So who does compose that security detail? Inquiring minds want to know.

Of course you won’t read about any of this in the mainstream press, which keeps their hands off women of color. But you can bet that if the Women’s March were a right-wing organization, the press would be all over it like ugly on a frog.

24 thoughts on “Woman’s March creator asks the four co-chairs, including Perez, Mallory, and Sarsour, to step down; new accusations surface about conflicts of interest and mismanagement of funds”