Here we go again: a Sophisticated Thinker decides that it doesn’t matter whether the truth claims of religion are really true, and argues that most believers don’t think that they are. Instead, religion is important because it makes us feel good.  The three problems with this are, of course, that it does matter to most people (if there’s no God, is there any sense in religion?), that in fact most believers do accept some supernatural truth claims, and that it’s hard to see how people can be religious, or go to church, unless they believe at least some claims about the universe—especially the claim that a god exists.

Further, the author, Stephen T. Asma, doesn’t worry about the downside of religion: how it controls people in a way that makes them feel bad (the guilt of Catholic children and the brainwashing of Muslim children come to mind), how it leads to a warped morality, and how it inspires bad and immoral acts. Finally, Asma doesn’t worry about whether the increasing secularization of the West (and the near-atheism of northern Europe) has proceeded in the face of increasing despondency of the secularized inhabitants. Are Swedes and Danes really that gloomy and bereft?

Do I need to go any further? Perhaps just for a bit. Read the article below (click on screenshot), whose author is identified this way:

Stephen T Asma is professor of philosophy at Columbia College Chicago. He is the author of 10 books, including The Evolution of Imagination (2017) and his latest, Why We Need Religion (2018).

Religion does not help us to explain nature. It did what it could in pre-scientific times, but that job was properly unseated by science. Most religious laypeople and even clergy agree: Pope John Paul II declared in 1996 that evolution is a fact and Catholics should get over it. No doubt some extreme anti-scientific thinking lives on in such places as Ken Ham’s Creation Museum in Kentucky, but it has become a fringe position. Most mainstream religious people accept a version of Galileo’s division of labour: ‘The intention of the Holy Ghost is to teach us how one goes to heaven, not how heaven goes.

. . . Religion is real consolation in the same way that music is real consolation. No one thinks that the pleasure of Mozart’s opera The Magic Flute is ‘false pleasure’ because singing flutes don’t really exist. It doesn’t need to correspond to reality. It’s true that some religious devotees, unlike music devotees, pin their consolation to additional metaphysical claims, but why should we trust them to know how religion works? Such believers do not recognise that their unthinking religious rituals and social activities are the true sources of their therapeutic healing. Meanwhile, Hitchens and other critics confuse the factual disappointments of religion with the value of religion generally, and thereby miss the heart of it.

Ahh, he’s channeling Stephen J. Gould’s NOMA idea. You can see that taken apart in my book Faith versus Fact, but I’ll give a very abridged version in this post.  But do most people think that religion’s truth claims are bogus, or irrelevant? Here’s what a random poll of all Americans (not just believers) think is true; this was taken by the Harris organization five years ago. These are all metaphysical claims, of course:

Further, many well known religionists have recognized that religious belief depends on truth claims. Here are three quotes I often use as well:

“I cannot regard theology as merely concerned with a collection  of stories which motivate an attitude toward life. It must have its anchorage in the way things actually are, and the way they happen.”  —John Polkinghorne

“A religious tradition is indeed a way of life and not a set of abstract ideas. But a way of life presupposes beliefs about the nature of reality and cannot be sustained if those beliefs are no longer credible.” —Ian Barbour

“Likewise, religion in almost all of its manifestations is more than  just a collection of value judgments and moral directives. Religion often makes claims about ‘the way things are.”—Karl Giberson & Francis Collins

Asma needs to get out more.

2.) Religion is really about morality, consolation, and emotional connection.

Maybe, then, the heart of religion is not its ability to explain nature, but its moral power?

If that’s the case, then give me secularism any day. For religious “morality” is often twisted and warped, more about people’s sex lives than their character. It tells them who to copulate with, what to wear, what to eat, whom to hate, and how often you should pray, and in which direction. How is that good?  And of course here are some results of Catholic “moral power,” a list I often give in talks:

Opposition to birth control (leading to an increase in STDs, including AIDS)
Opposition to abortion
Opposition to divorce
Opposition to homosexuality
Control of people’s sex lives
Oppression of women
Sexual abuse of children
Instillation of fear and guilt in children

If that’s the heart of Catholicism, please do an Aztec-style cardiectomy! But wait, Asma has more! (Emphases are mine.)

Emotional therapy is the animating heart of religion. Social bonding happens not only when we agree to worship the same totems, but when we feel affection for each other. An affective community of mutual care emerges when groups share rituals, liturgy, song, dance, eating, grieving, comforting, tales of saints and heroes, hardships such as fasting and sacrifice. Theological beliefs are bloodless abstractions by comparison.

Emotional management is important because life is hard. The Buddha said: ‘All life is suffering’ and most of us past a certain age can only agree. Religion evolved to handle what I call the ‘vulnerability problem’. When we’re sick, we go to the doctor, not the priest. But when our child dies, or we lose our home in a fire, or we’re diagnosed with Stage-4 cancer, then religion is helpful because it provides some relief and some strength. It also gives us something to do, when there’s nothing we can do.

Asma makes a big deal about how religion can console people facing death, or those whose loved ones have died, implicitly arguing that atheists lack such consolation:

Consider how religion helps people after a death. Social mammals who have suffered separation distress are restored to health by touch, collective meals and grooming. Human grieving customs involve these same soothing prosocial mechanisms. We comfort-touch and embrace a person who has lost a loved one. Our bodies give ancient comfort directly to the grieving body. We provide the bereaved with food and drink, and we break bread with them (think of the Jewish tradition of shiva, or the visitation tradition of wakes in many cultures).

He goes on and on. But I want to point out just one thing. We all know, of course, that much of that consolation does indeed come from religious beliefs that are taken to be true, namely the existence of God and of an afterlife. And Asma even obliquely admits this (my emphases):

Part of our ability to cope with suffering is our sense of power or agency: more power generally means better coping ability. If I acknowledge my own limitations when faced with unavoidable loss, but I feel that a powerful ally, God, is part of my agency or power, then I can be more resilient.

What? But what about those “bloodless theological beliefs”? Clearly God isn’t one of them!

God’s existence is in fact a genuine metaphysical claim, and without that then not even Asma is consoled. And has he considered that we nonbelivers who don’t accept gods on the grounds of no evidence cannot force ourselves to believe, even if we think it would help us? God may make Asma feel better, but I can’t make myself believe in God. I am not so constituted.

All I can say is that Asma seems clueless here, oblivious—in his eagerness to argue that religious makes no truth claims—to how the world really works. And yet he requires God to be consoled! The man is not only clueless, but can’t make a coherent argument. And Aeon doesn’t require that he make one. All they want is endless and sloppy osculation of faith.

To close, I’ll point out that the countries that are the happiest ones in the world are on average less religious (see chart below). Just sayin’. This is a correlation and not necessarily a causal relationship, but it’s the exact opposite of what Asma predicts. So it goes. 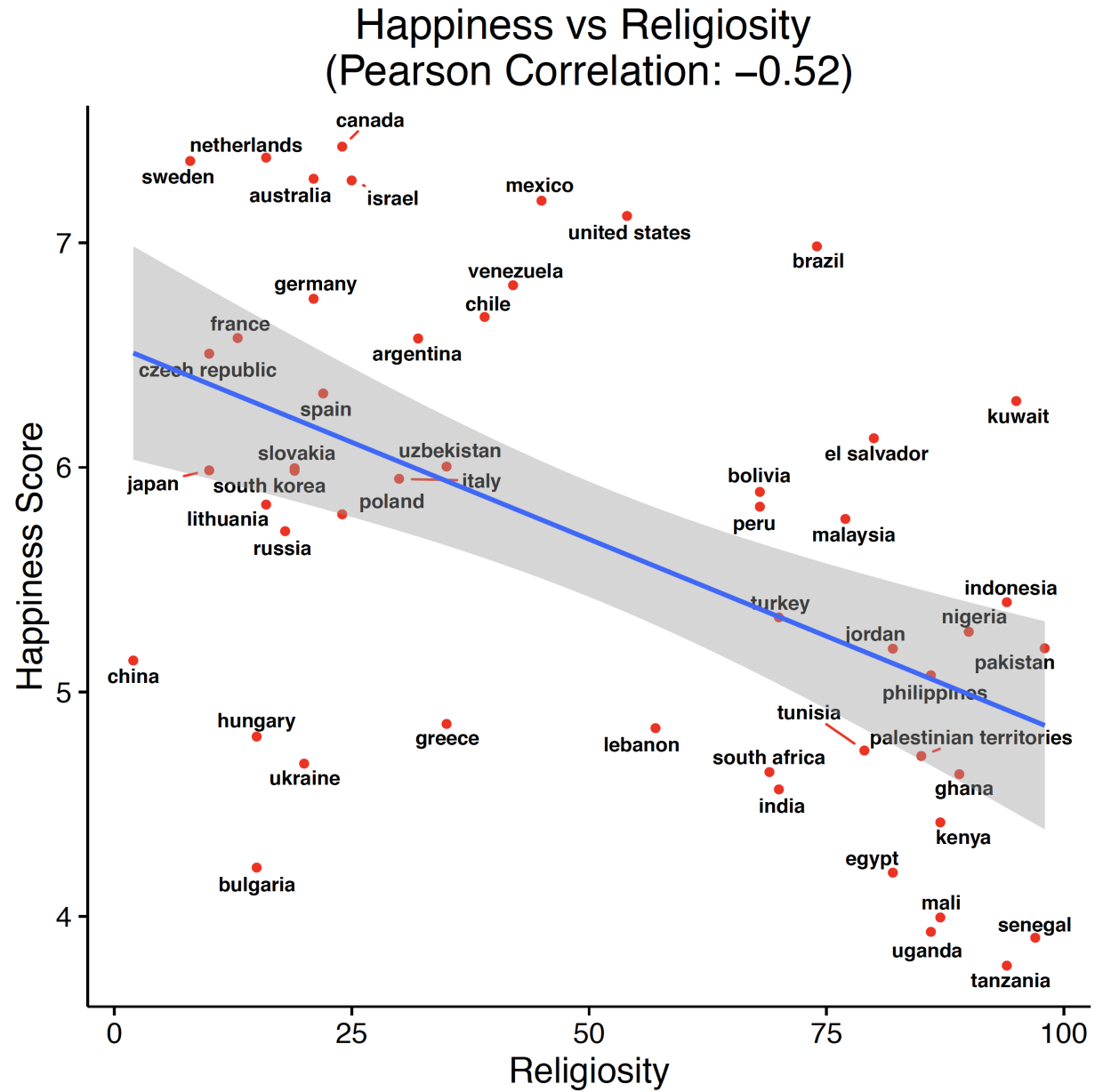 What is going on with the online magazine Aeon, anyway? Are they taking Templeton money on the sly? 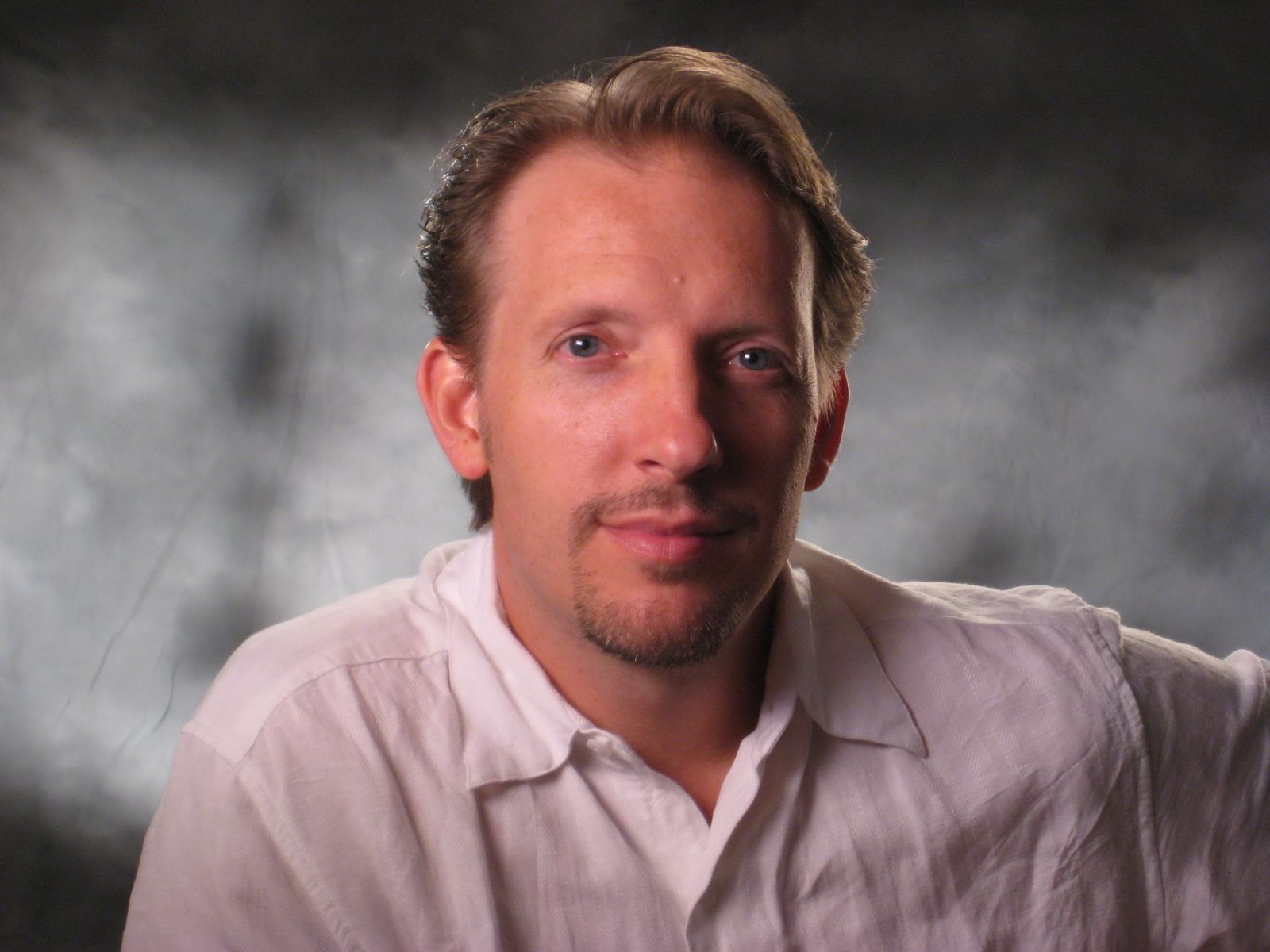 147 thoughts on “Who cares if religion is true if it makes us feel good?”