Click on the screenshot below to watch this short 2½-minute video featuring Lindsay van Dijk, the first humanist chaplain to work for the National Health Service in Britain.

van Dijik was appointed by a trust, so I’m not sure the NHS actually pays her salary, but that doesn’t matter. What’s good is that she works in NHS hospitals, seems caring, is acting as a listener/psychologist and not at all as a proselytizer, and gives nonbelievers someone to talk to—someone who isn’t going to tout Jesus (most of the chaplains are Christian). And she’s not there to promote atheism, unlike those religionist who try to convert people in hospitals. 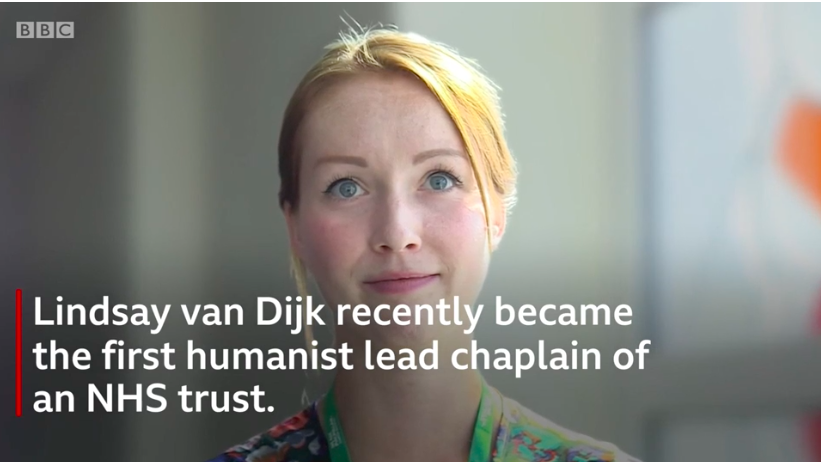 This just reminded me yesterday how, after I gave my talk on the evidence for evolution, and mentioned very briefly how the main opposition to evolution came from religion—a statement that was indubitably true—no fewer than three people, including a Jesuit priest, came up to me or questioned me about why religion and science couldn’t exist in harmony or have mutual dialogue. Rather than tell people that was possible, and that I “respect” religious beliefs, I said what I thought: that religion had nothing to contribute to science, and that while I will treat religious people with the respect due them as human beings, I wasn’t going to respect their unevidenced beliefs. We can work with the faithful to promote evolution, but can’t allow ourselves in the process to somehow give credence to the fairy tales they’ve embraced.

This got the Jesuit priest’s hackles up, and he came up to me afterwards to say that, by criticizing religion, I was driving people away from evolution and into the arms of creationists. I told him there was no evidence for that, citing the many religious people that Dawkins’s atheism had not only weaned from faith, but guided towards evolution.

In contrast, how many people say, “Well, if Dawkins would just shut up about atheism, I’d be glad to embrace evolution?” I’m sure that there are a few people who won’t embrace evolution because they think that means they must give up their faith, but I also I feel these are vastly outnumbered by those who have become secular because there’s no evidence for God—and then readily accept evolution. (There’s not much reason to oppose evolution if you’re not religious.)

As a friend of mine said, the priest’s point was like saying, “If you make fun of Santa, you’re just going to turn kids towards believing in Rudolph the Red-Nosed Reindeer.”

I told the priest that while Catholicism formally accepts evolution, it still has problems with accepting science in general, like its official insistence (in Catholic dogma) that we not only have souls, but that Adam and Eve were real people—the ancestors of us all. He insisted that there was a long history of Sophisticated Theologians™ who interpreted Adam and Eve, not knowing that I knew a lot about it.  I refused to argue at this point, as I wanted to hear Wynton Marsalis. I wasn’t about to tell him that both Aquinas and Augustine believed in a real Adam and Eve, not a metaphorical one. That, after all, is what the Bible says. The rest is just mushbrained apologetics.

But at my mention of a soul, another woman jumped in and asked me why I didn’t accept souls. I said that she should ask Sean Carroll, who was sitting in the audience and had explained, in his excellent talk, the impossibility of a non-material object like a soul interacting with material ones like bodies. She then said she knew souls were real because she had had past-life experiences.

The attendees at KentPresents were highly educated and seemingly wealthy, yet there were still a few among them wedded to these superstitions. What was odd, even though I loved the conference (more later), was this: it was clear that nearly all the attendees disliked Trump intensely, and chuckled and guffawed appreciately when speakers made fun of him.  It was fine to make fun of Republicans, but not  fine—at least for some—to indict religion for promoting creationism and also to claim that there’s no evidential basis for religious truth claims, for every religion makes different claims. Such is the hold of faith on even highly educated people. The fastest way to alienate liberals is to criticize religion. The surest way to make liberals love you, besides mocking Trump (and here I join them) is to go all soft on religious belief, claiming that people need it as a comfort.