Reader Michael called my attention to a comic-book presentation of accommodationism at the website Nautilus, a site founded and apparently still funded by the John Templeton Foundation. Click on the screenshot if  you want to see this heavy-handed presentation:

The comic highlights a new venture, Science and Religion: Exploring the Spectrum (SRES), which is sponsored by the Templeton Religious Trust, Newman University, The University of Kent, and, God help us, both the British Library and the British Science Association. Why the latter two organizations are engaged in theology, especially in a country far less religious than the U.S., is beyond me, but British scientists should raise some objections.

As you might expect from the Templeton participation, the answer to the question is “no,” but they’re limiting the “problem” to the UK and Canada, where far fewer people have a problem with evolution than they do in the U.S. Nevertheless, there are Canadian and British creationists.

The comic is dull and pendantic, but does highlight some useful points. First, as we’re increasingly realizing, acceptance or denial of evolution is largely a matter not of accepting or adjudicating facts, but flaunting your membership in a tribe: religious people and conservatives who reject evolution, and liberals who accept it.  This is true in the U.S., too: on a questionnaire about science literacy in America, the National Science Foundation originally had a question about evolution, but discovered that it didn’t correlate with knowing truths about other areas of science, but rather was highly correlated with religiosity. In other words, the “do you accept the truth of evolution” question was a marker not of scientific literacy, but of religiosity. The question, adding nothing to the survey’s results, was dropped.

Further, the cartoon makes the obvious point that if you push evolution at the same time you call religious people “morons”, or insult them directly, you’re not going to be very effective. On the other hand, the cartoon is wrong in asserting that one can be consistently religious and accept evolution. That’s because the inconsistency becomes plain when both religion and science make truth claims, as they both do; but we see that only science has a way to examine and test those claims. In other words, the incompatibility of science and religion, the thesis of my book Faith versus Fact, is an incompatibility in how we evaluate truth claims. And believe me, virtually every religion makes truth claims, most starting with the existence of a theistic God. Of course, the cartoon doesn’t examine this incompatibility, but just trots out the old canards of showing “compatibility” because many scientists were Christians, that many laypeople accept evolution and religion at the same time, and so on. It doesn’t attack the fundamental weakness of relying on faith rather than empiricism to discover what’s true.

Here are a few panels from the cartoon. I’ve made a Word document with the whole thing in it, which you can obtain with judicious inquiry.

Here the cartoonist doesn’t understand that creationists want their lies taught in schools while believers in aliens don’t:

Have a gander at this lame attempt at showing the compatibility of science and religion.  It implies that Charles Darwin was religious, when in reality he became increasingly atheistic as he aged. As for those who lived before Darwin, well, everyone was a creationist then, since it was the only game in town. Does that mean religion is compatible with everything that happened before 1859? 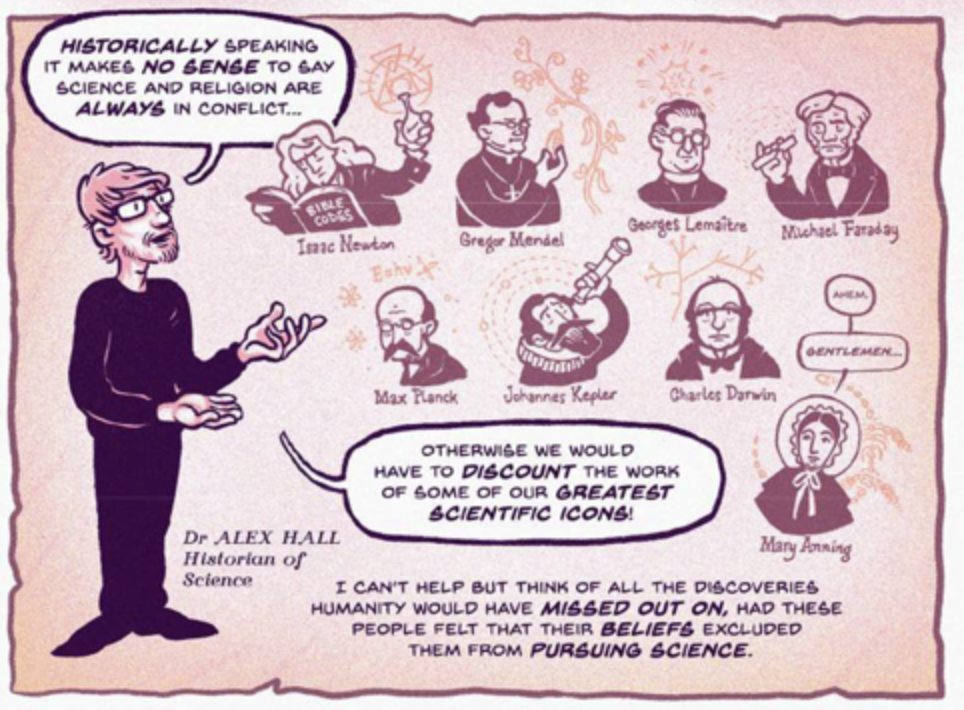 Another way the cartoon touts religion is to say that science answer the “small” factual questions while religion answers the big “existential” questions, which of course it doesn’t. This is Gould’s non-overlapping magisteria (NOMA) view of compatibility: 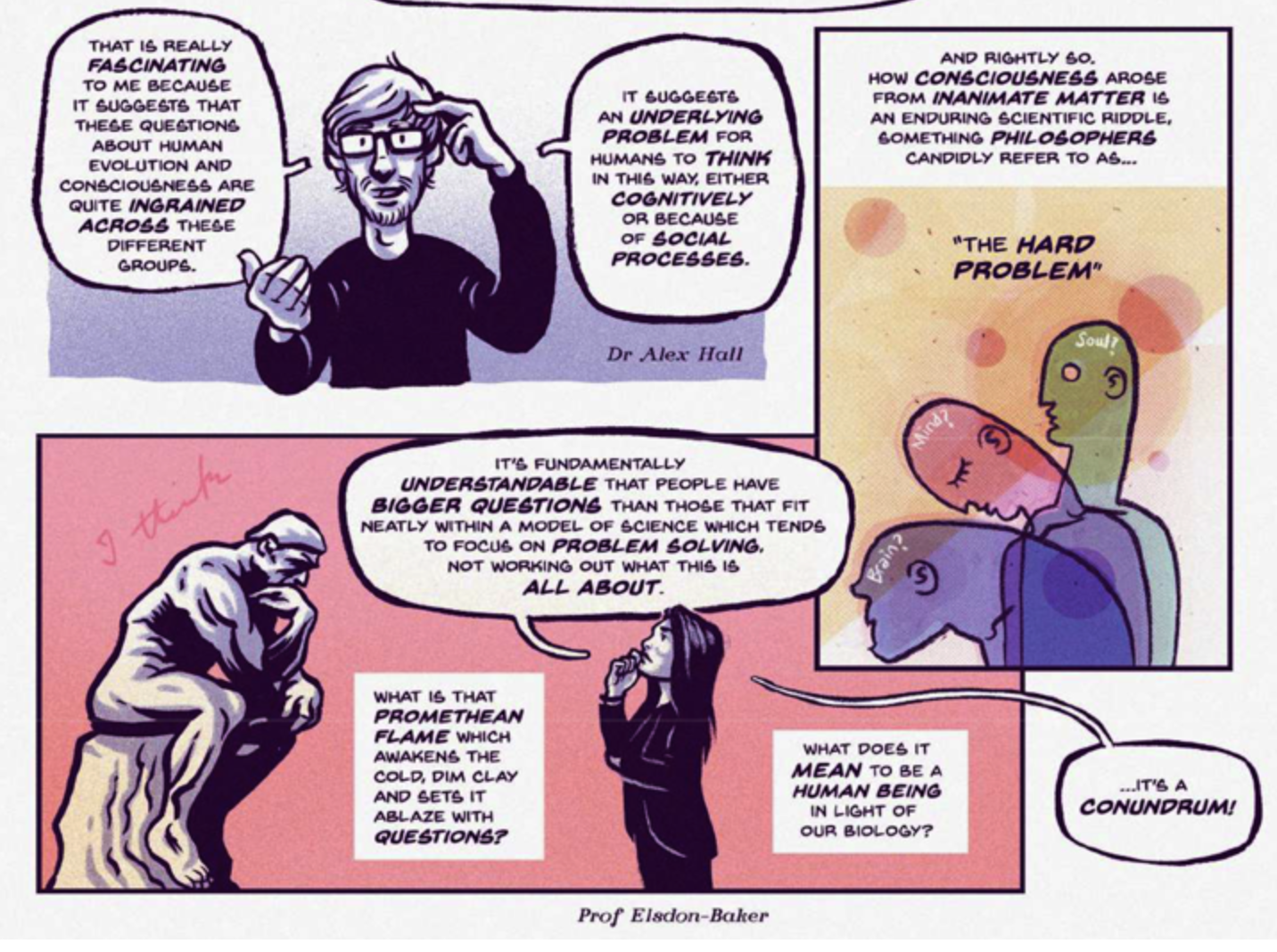 The cartoon unwittingly undermines its own premise with these panels, showing that people find a way to believe what they want to believe. Similarly, accommodationists like those supporting the SRES project start with the premise that science and religion are compatible, and then confect ways to justify that conclusion:

Here’s another unwitting revelation of the conflict between faith and fact: a confused religionist who accepts evolution says that his faith is really about Jesus, not evolution. But having “faith in Jesus” means you accept the existence of Jesus, his divinity, and his crucifixion and resurrection, all empirical claims that are in principle testable. Needless to say, there’s no hard evidence for any of them: 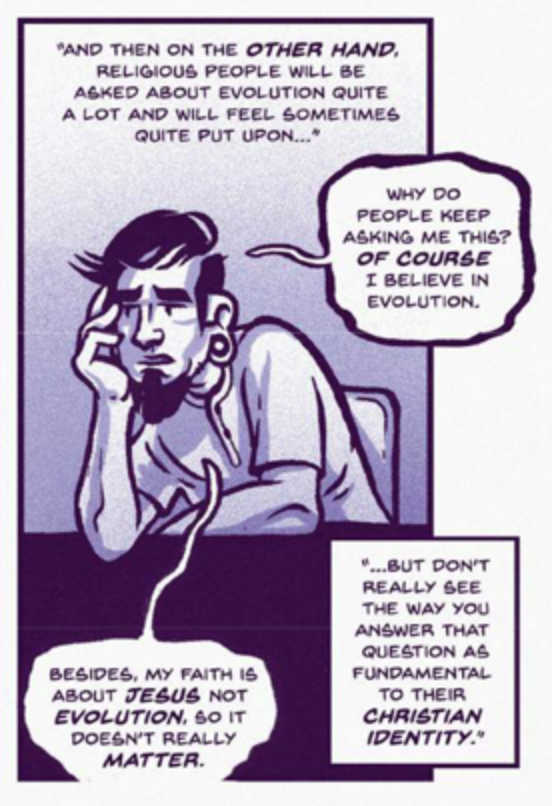 Here’s a bit of science-dissing, implying that while science doesn’t have “unchanging ultimate truth”, religion does. Of course religion doesn’t: the different faiths can’t even agree with each other what “truth” is, while all chemists, regardless of their faith or lack thereof, accept that a molecule of benzene has six carbon atoms and six hydrogen atoms: 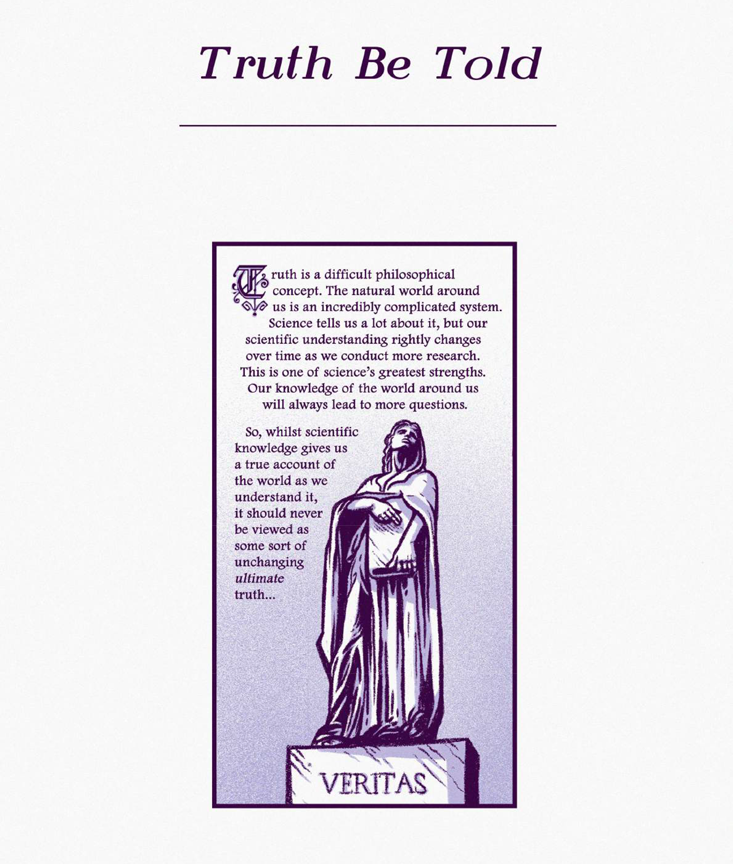 Finally, they resort again to a NOMA-ish attitude, saying that science and religion can “share the same space”, illustrating that with a picture of the “Darwin Building” next to a church or theology school. Well, my department of ecology and evolution shares the same quadrangle with the University of Chicago’s Divinity School. Does that prove that science and religion are compatible? What kind of fool would claim that? On the same campus reside those postmodern scholars who assert that science has no privilege when it comes to finding truth about the universe. Surely science isn’t compatible with that form of po-mo nonsense: 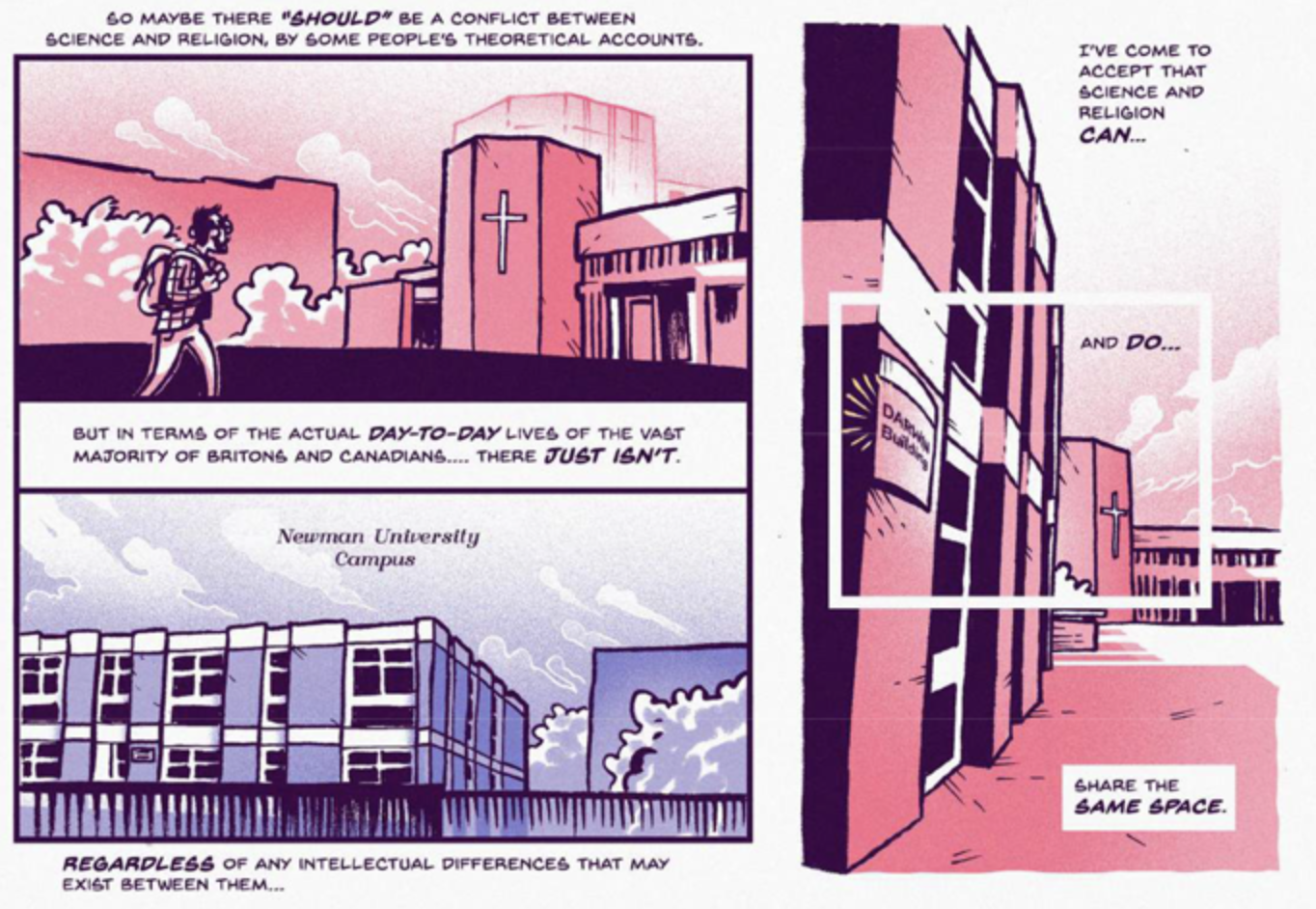 There’s a lot more pablum in this jar, so ask if you want to see the whole damn thing, or just read the cartoon on the website. I guarantee that you won’t be enlightened.

This is par for the course for Templeton, but it’s horrifying to think that this project is sponsored by both the British Library and the British Science Association.

And I ask again: why are people so interested in whether science and religion are compatible rather than, say, whether business and religion are compatible, or sports and religion? Could it be that there has been a conflict between the first two areas and not the last? And if that’s where the interest lies, why? I think it has something to do with the fact that science has the ability to test claims about the universe, and has repeatedly disproven the claims of religion—starting with Genesis I and II— but religion has no reciprocal ability. Science doesn’t need religion to see whether its hypotheses are true.