The last thing I would have expected would be for the Turkish government to arrest Adnan Oktar, who, as a creationist, writes under the name of Harun Yahya.  After all, Erdogan’s neo-Islamist government has stopped teaching evolution in secondary schools, most likely because it contravenes Qur’anic doctrine. Oktar was the author of the three-volume, lavishly printed The Atlas of Creation, which was sent gratis to hundreds of biologists throughout the world. There was some big money behind that! Surely the government has no beef with his creationism.

But Oktar is a bizarre character, and has other behaviors that aren’t so congenial to a sexually reserved society. He’s famous, for instance, for his coterie of sexualized and surgically enhanced blonde “kittens”, who worship him and hang on his every word (see the documentary below which I’ve posted before), and who are entertained by kitten-ish belly dancers. He’s also been arrested multiple times for crimes ranging from financial misdealings to drugs to espionage. But he’s served very little time in jail.

Earlier this year, though, Oktar got into conflicts with the government, first accusing the Turkish Directorate of Religious affairs of getting money from casinos and sales of booze, and then being slapped with a restraining order for using possibly coerced belly dancers on his television show, with that show subsequently being suspended for mixing belly dancing and theology—a no-no in Turkey. (The excuse was that the show “violated gender equality and women’s rights.”) To see that story, click on the screenshot below:

Now, according to both Reuters and the Turkish Hurriet Daily News (click on screenshot below) Oktar and 234 (Reuters says 160) followers have been arrested, and various property seized (arms, armored vehicles, body armor, etc.) for fraud, forming a criminal gang and sexual abuse.

Hurryiet newspaper said police raided Oktar’s house at Cengelkoy on the Asian side of Istanbul, detaining him and his guards who tried to resist and flee.

Police said they had so far arrested 166 people out of 235 sought suspects.

Accompanied by police, Oktar held up his handcuffed arms as he emerged after a mandatory health check at hospital before being taken to a police station in Istanbul.

State-run Anadolu news agency broadcast footage of a police helicopter hovering over the area where one raid was being conducted and said a police maritime unit was also involved in the operation.

I think Oktar’s in bigger trouble this time: you don’t mess with Erdogan’s government and get away with it.

Here’s Oktar doing the perp walk. It couldn’t happen to a nicer guy! As for the kittens, well, I guess they’ll be put up for adoption: 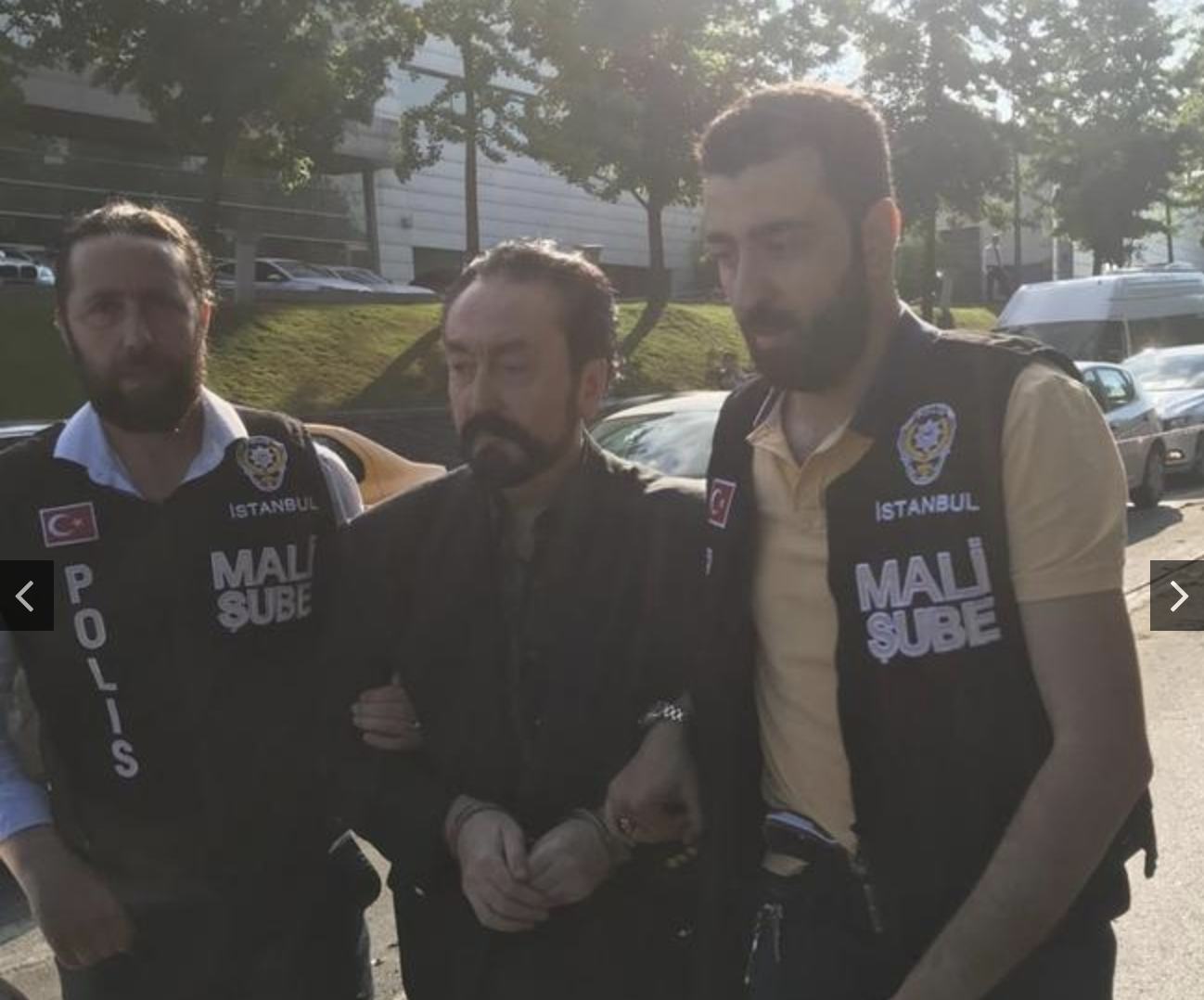 27 thoughts on “Adnan Oktar (aka Harun Yahya) arrested in Turkey”