UPDATE: In the comments, reader PJ calls our attention to a piece showing that Wu even gets the biology of hyenas badly wrong. Click on the screenshot: 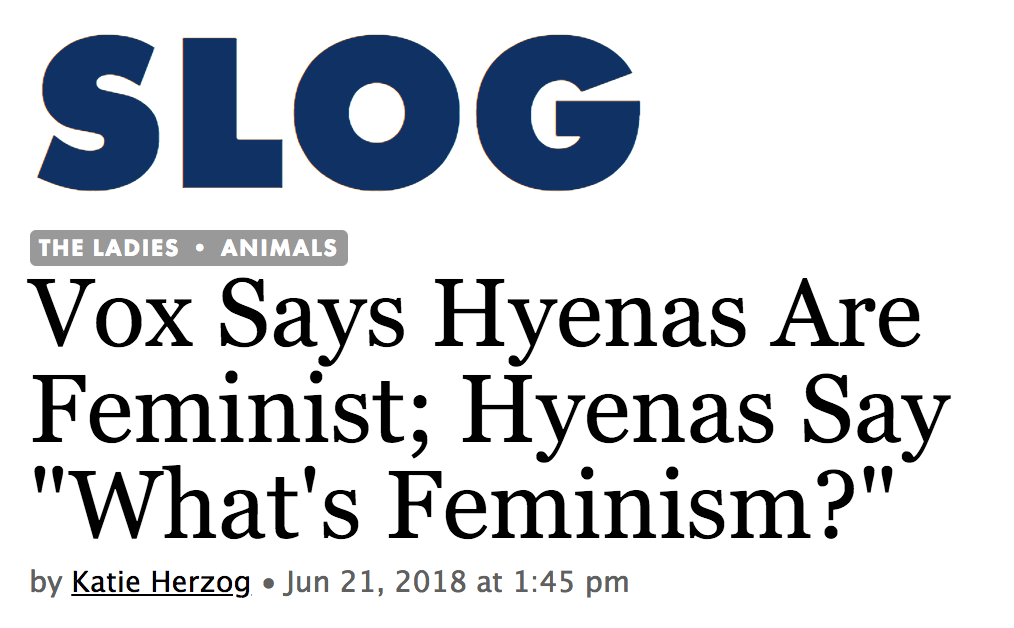 The criticisms Herzog outlines, which come from experts on hyenas, are far more serious than the logical fallacies I identify below, for it shows that Wu, a graduate student in biology, can’t even get the basic biology right. Vox really should take down that article.

See a related critique by author and illustrator Beth Windle (click on screenshot): 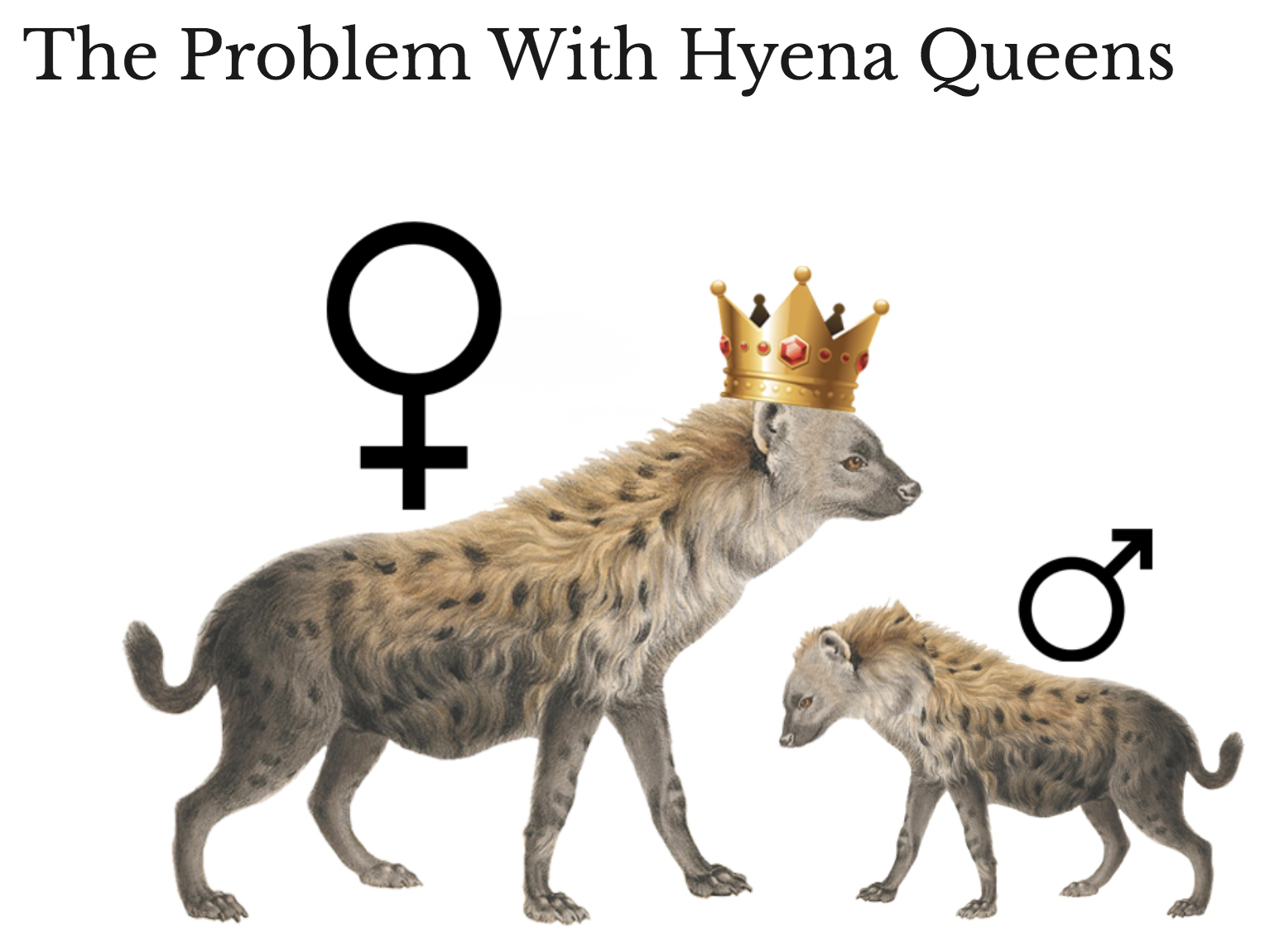 Here we have an article (click on screenshot below) that demonstrates two things at once. First, that Vox, where it was published, is not only a Control-Leftist site (it’s been that way for a while), but also has very low standards for publication. Second, that we should never draw lessons from nature about how to structure human society.

The author, Katherine Wu, a graduate student in microbiology and immunology at Harvard, is also a 2018 AAAS mass media fellow at Smithsonian Magazine. And she manages, in this dog’s breakfast of an article, to not only characterize the matriarchal society of spotted hyenas (Crocuta crocuta; also called the “laughing hyena”) as infinitely superior to any patriarchal animal society, but then says that (in light of #MeToo and other recent demonstrations of male sexual malfeasance), we should take a lesson from hyenas. In other words, we should be more like hyenas in terms of sexual equality.

Perhaps we should, but we don’t need hyenas to tell us that! The idea that we should take lessons about human morality and society from nature is called “the naturalistic fallacy,” often characterized as “is equals ought”. That is, the supposed peacefulness and other advantages of matriarchal hyena society—supposedly including greater genetic variation and a larger population size—should compel us to be more like hyenas—to treat women better. To be sure, Wu isn’t favoring a matriarchy, but more equality of the sexes.

The thing is, we’re all in favor of that, but we don’t need hyenas as a model system! In fact, we should never make the argument for equality from observing animals. And I’ll tell you why in the rest of this post.

You can read about the matriarchal society of spotted hyenas at Wu’s article. In this species, females are dominant and males subordinate. This is not common in the animal kingdom, but is not vanishingly rare, either. Males are smaller than females, must leave their groups to join others (lions do the same thing, and in some ways, like hunting, lion society is matriarchal). Female spotted hyenas also have a well-known pseudopenis, which is an enlarged clitoris through which they copulate, urinate, and give birth. Males copulate with females by inserting their penis into the pseudopenis. In fact, the female structure so resembles the genitalia of a male (including an ancillary false scrotum), that it’s hard to tell the sexes apart. Here’s what the female genitalia look like:

Here are some aspects of hyena biology and social behavior that, claims Wu, are things that, in one way or another, offer lessons to human society:

What Wu shows is that a stable and numerically successful species can survive despite a matriarchal organization. We’ve known that for a long time, though, and there are of course other matriarchal species, as well as populations of humans that are matriarchal.  She then makes a misstep (and derails her article) by tying this to the #MeToo movement and other forms of mistreatment of women:

I’ve been thinking a lot about the spotted hyena this year — and not just because of the mind-boggling fact that these ladies push multiple 3-pound cubs through a fake penis and live to tell the tale. In many ways, their complexities echo so many human notions about the roles women can and cannot occupy. The idea of a woman at the helm remains a hard pill to swallow in our own society.

This past January, hundreds of thousands across the world marched for the second year in a row to protest the constraints on women in all walks of life. Fifty-five years after the passage of the Equal Pay Act, women still make only 80 cents for every dollar earned by men — a gap that widens into a chasm for women of color. And in the prolonged wake of the #MeToo movement, stories of sexual misconduct by powerful CEOs, Hollywood stars, and White House staff continue to appear in the news week after week.

The scandals surrounding Harvey Weinstein, Larry Nassar, and countless others have empowered women everywhere to speak out. But every woman who has come forward to share her story also reminds us that ignorance and female marginalization are still the norm rather than the exception.

. . . I’m not suggesting we try to emulate hyena societies. We’re striving for gender equality, not a reversal of traditional subjugation.

But we should not have to succumb to the binary of patriarchal or matriarchal. There is a middle ground, and it’s completely achievable. To someday reach that compromise, our male-dominated society needs to study female empowerment.

We can start by acknowledging that patriarchy isn’t a necessary natural order. Powerful females abound in nature and govern complex societies of intelligent individuals. A culture led by women is not doomed or damned.

In spotted hyena clans, male stalking, harassment, and aggression toward females are taboo. These tactics simply don’t work. If a guy wants to woo a girl, he waits patiently and earns her respect through deference and altruism — because he knows he is not entitled to her affection or anatomy simply by virtue of being male. When it comes to hyena sex, it’s the considerate guys who get the ladies. Human males, take note.

You get the idea. We should be like hyenas, and maybe studying and learning about hyena behavior will compel us to be more like them.  But, of course, if you studied patriarchal societies, and accepted the naturalistic fallacy, you’d say we should be more like elephant seals or gorillas.

Wu has gone badly wrong in underlining the wonders of a matriarchal society and then asserting that this should tell us to be more like hyenas.  Why is she wrong? Because she brings to her analysis a view that precedes her study of biology: that women should be treated more fairly and equally. In other words, she’s picking out an animal society to buttress what she already believes.  And I agree with her about the preconception: we should certainly strive for greater equality between the sexes, more respect towards women, and equal opportunity for all sexes and genders. But we don’t need hyenas to tell us that! And we shouldn’t USE hyenas to support that argument!

We should never draw lessons about how to structure human society by looking at animal societies, for an “is” is not an “ought.” (We can, of course, help understand human societies by studying our evolutionary past, but from that we’d conclude that the patriarchy, in the end, is biologically based: males originally dominated females because of sexual selection: males are larger than females, and females are constrained by the fact that they reproduce and often take care of the offspring). While biologically based patriarchy can be and is indeed reinforced by social strictures—once males have power, they can use it to disempower females even more—I believe that the dominance of males ultimately goes back to our biology and to sex differences created by sexual selection. But of course we needn’t blindly follow that pattern, and we shouldn’t. Being a modern human means doing many things to overcome our biology (contraception is one, medical intervention to cure disease and injury is another).

In my view, then, Wu has erred badly, and mislead her readers by asserting that we should try to emulate this and that aspect of this and that animal society. And what she’s done is commit a scientific version of the Euthyphro fallacy: the fallacy that God is the source of morality. Plato refuted that fallacy by showing that there is a pre-God morality that comes into play when you make that claim. If God told you to do something like kill an innocent child, for instance you wouldn’t do it simply because God ordered you to. That’s because we have an idea (evolved or cultural) that committing such an act is bad. If you then argue that “God wouldn’t ask us to do that because God is good” (but see the case of Abraham v. Isaac), then you are espousing a notion of good that precedes your notion of God.

Likewise, Wu has a preconception that women should be treated no differently from men. I agree, especially if we’re talking about civility and opportunity. She starts with that idea, and then finds support by describing in extenso the supposed wonderfulness of matriarchal hyenas. But we don’t need the damn hyenas! What Wu has done is simply find a species that conforms to what she wants human society to be more like, and then say, “We should take a lesson from that society.”

What she’s doing shouldn’t fool anyone, though it apparently fooled the editors of Vox. And it’s absolutely terrible science writing because it commits the naturalistic fallacy. The sad part is that Wu gains no more traction for feminism by describing hyenas than if she simply made the moral argument. I doubt that learning about hyenas is going to make a sexist say, “You know, hyena societies really do work well. I’m going to be nicer to women.”

I agree with the moral argument that really underlies Wu’s lucubrations. But her use of biology to support it is fallacious, tendentious, and misleading.

If I were a postmodernist, I’d say that Wu’s article is a great example of the Euthyphro Phallus-y, instantiated in the lived experience of hyenas.

63 thoughts on “Do hyenas smash the patriarchy?”