. . . . or rather, a Kiwi. And as an honorary Kiwi, I’m delighted to announce that New Zealand’s prime minister, Jacinda Ardern, gave birth to a baby girl yesterday. The father is her parter Clarke Gayford.

The happy couple with their first child: 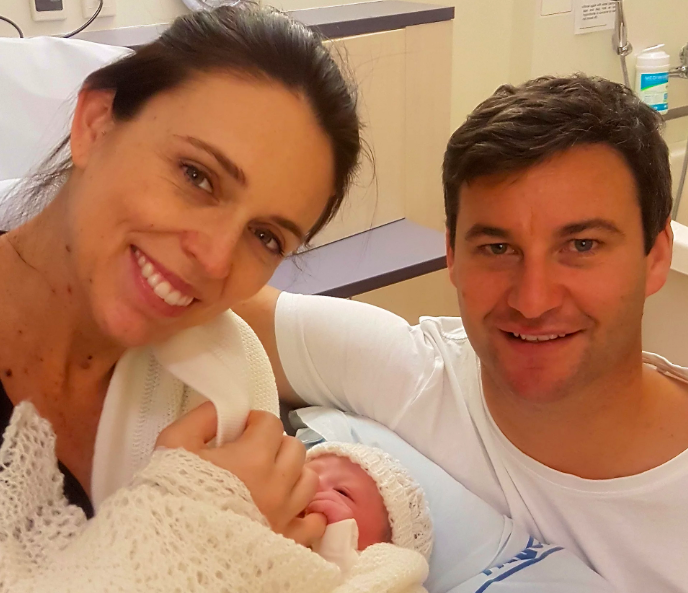 As the Guardian reported:

Ardern posted the news to her Facebook page, saying her daughter was born at 4.45pm.

“Welcome to our village wee one,” she wrote, next to a picture of her and partner Clarke Gayford cuddling the newborn.

“Feeling very lucky to have a healthy baby girl that arrived at 4.45pm weighing 3.31kg (7.3lb). Thank you so much for your best wishes and your kindness. We’re all doing really well thanks to the wonderful team at Auckland City hospital.”

. . . The former prime minister Helen Clark told Radio NZ that the birth was a fine example to young people in New Zealand.

“Jacinda’s done it her way, what a remarkable story.

“She’s taken it in her stride, New Zealanders have taken it in their stride … all round I think we’re showing huge maturity as a country with this.”

Ardern is taking only six weeks of maternity leave although she’s entitled to 26 weeks of paid leave. She has a country to run!

I add my congratulations to that of the U.S. Ambassador to New Zealand, though I don’t understand the Maori words (readers can help):

Wonderful news! Huge congrats to 🇳🇿 Prime Minister @jacindaardern and @NZClarke on the birth of their baby girl! A warm welcome to the world! Wishing the family health, happiness, and all joy in the world. Tēnā koe i tō tamāhine. Ngā mihi mahana.

Gayford, a television presenter, announced that he will become the “First Bloke,” a stay-at-home dad. What a great country!

Oh, and the 37-year-old Ardern is only the second world leader in modern times to give birth while in office. (The first was Benazir Bhutto in 1990.)

19 thoughts on “Jacinda has a duckling”