Five days ago I reported on the unctuous Dr. Mehmet Oz and his new claim that various medical conditions and ailments were correlated with your astrological sign. I poo-pooed this since I couldn’t see any obvious connection between birth date and medical conditions. Well, I may have spoken a bit too fast, though, as I note below, there is still not a scintilla of evidence that the specific ailments Dr. Oz and his toadies ascribe to your “sign” are correlated with the zodiac.

Yet there may be a correlation between birth month (not astrological sign) and disease because of the environment in which you’re born, most notably the temperature and amount of sunlight. That, at least, is the tentative conclusion of the paper below, which I believe is in a reputable journal (J. American Medical Informatics Association is published by the Oxford University Press). Click on the screenshot to see the article (h/t to reader David for calling this to my attention):

In brief, the authors did a huge survey of nearly two million people—1,749,400, to be exact—born between 1900 and 2000; all records were from the New York-Presbyterian/Columbia University Medical Center. This means that all the subjects spent at least their infancy in New York, and experienced the climate of New York (though of course babies aren’t outside that often). The authors then correlated the birth month with conditions identified in the patients (median age 38 years) using a logistic regression and various methods to rule out “false positives” due to random variation. They assessed 1688 medical conditions from the records of all patients. To find correlations, at least 1000 patients had to show the condition. 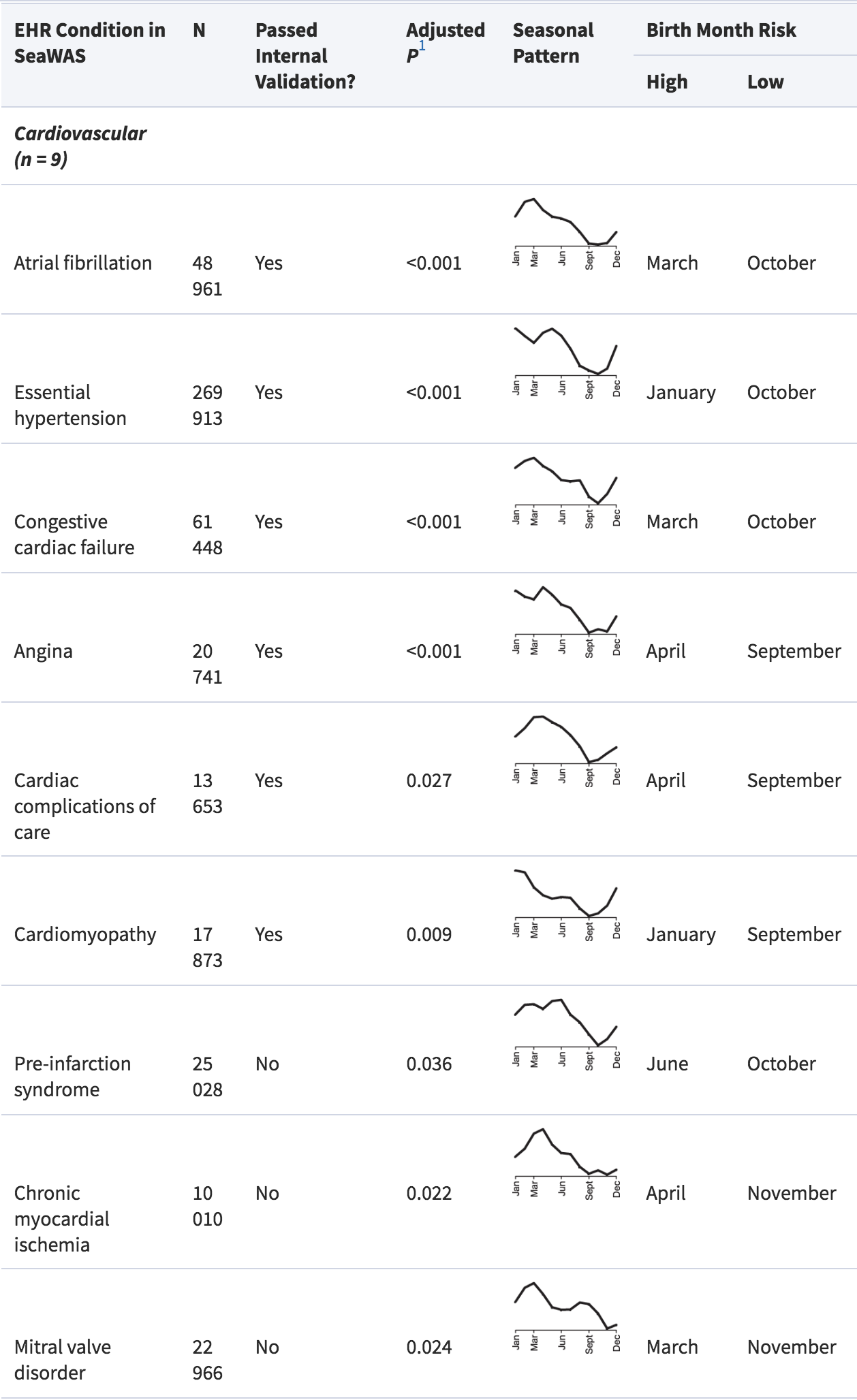 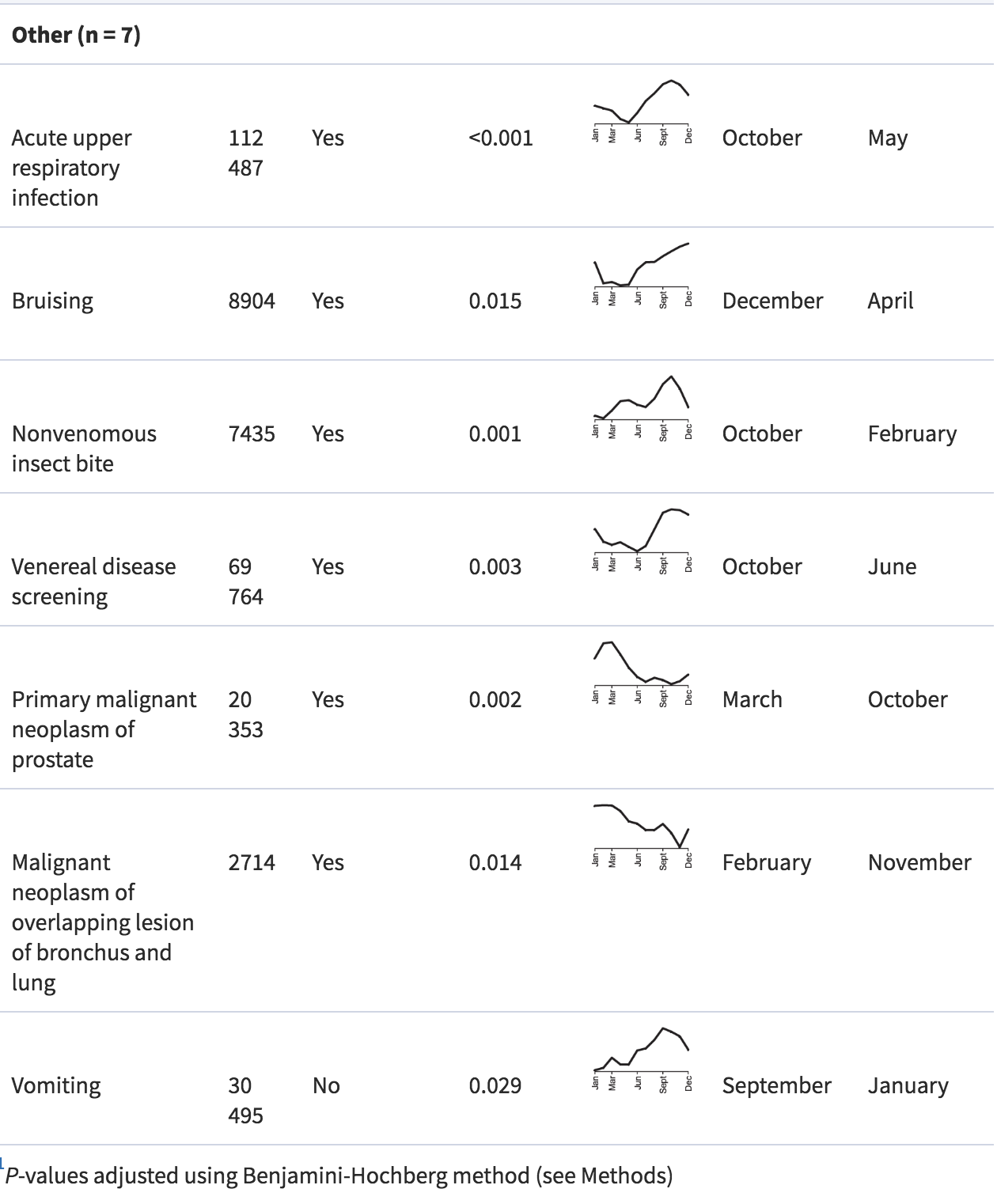 Other diseases showing strong associations with birth month but not shown here include asthma, AHHD, reproductive output, and myopia.

Asthma peaks in the summer, and this has been shown in several studies (below; but note the y axis showing that the proportions of afflicted by month differ only slightly, though significantly. The authors posit that this might be because dust mites are highest when sunlight is at its peak, and the implied idea is that dust mites cause asthma that remains chronic. The months are offset, with Scandinavia showing a peak a few months later, corresponding to their their dust-mite season (summer) being a bit later.  But in both New York and Denmark, asthma is correlated with peak sunshine in the countries where disease rates were assessed: 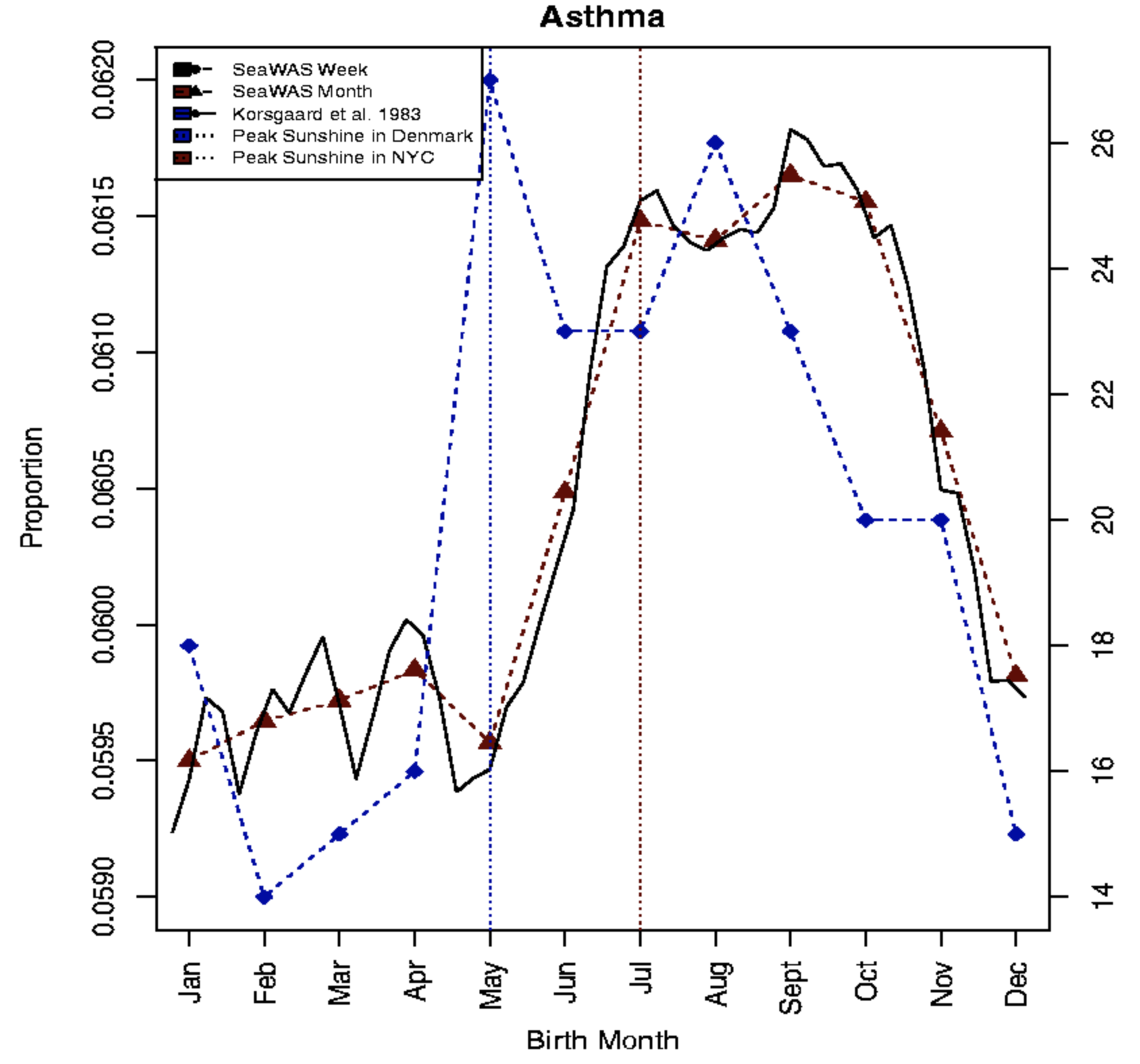 What about birth output, venereal disease, cancer, myopia, ADHD, and other conditions? It’s not clear. For ADHD, the authors posit that children born later in the year (who have a higher risk of ADHD) might simply have their ADHD detected more easily  as children born up to December 31 go to school with all the kids born in that same year. As the authors say, “this occurs because more immature children (i.e., younger in age) face higher demands earl on in their school years making them more susceptible to ADHD diagnosis.” Well, that’s one theory, but it doesn’t sound that convincing. As for myopia, cancer, and other stuff, who the hell knows?

What we have, then, are suggestions, corroborated in part by studies in Europe, of correlations between 55 maladies in children and the month in which they were born.  And there may well be something to this, though for many of the disease the causes (if this is corroborated elsewhere beyond New York City) are not obvious.

Does this vindicate Dr. Oz, then? Not on your life. Remember, zodiac signs don’t correspond to birth months, but to 2/3 of one month and 1/3 of another (see below). But given the peaks, there would almost certainly be significant correlations between zodiac signs and disease anyway, at least for the New York sample, and probably for the Danish samples for heart disease. The signs: 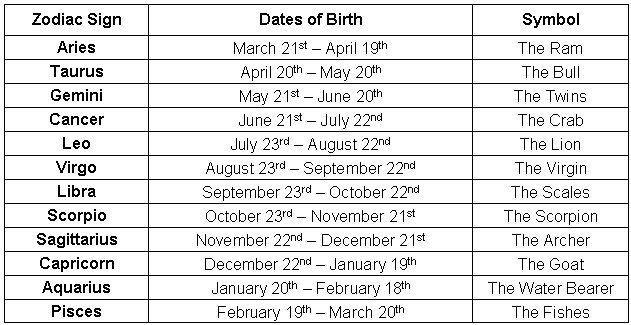 There are two other issues, though. First, the relative risks based on birth month are very small: so small that you don’t want to tell someone that they’re a lot more susceptible (or even appreciably more susceptible) to a disease because they are, say, a Pisces rather than a Leo.

Second, these samples are from one place, New York City. These associations need to be replicated in other places. This is particularly important south of the Equator, where the sunlight and temperature regimes are reversed, and so the associations should be much different by month and by Zodiac signs. And on the equator, there should be no associations, at least for those diseases associated with sunlight exposure.

Finally, the maladies that Dr. Oz says are associated with Zodiac signs aren’t any of the ones found in this study. The list of Dr. Oz’s astrology-sign diseases is here. Here are the 12 maladies supposedly associated with your astrology sign:

If Dr. Oz wants to tell people that their “signs” predispose them to these conditions, let him show data supporting it. As for now, the maladies associated with birth month (and probably with “sign”) aren’t those touted by Dr. Oz and his flacks.

47 thoughts on “Diseases are correlated with birth months”