No! Not the Washington Post, too! Well, judging by this op-ed by Suzanna Danuta Walters, identified as “a professor of sociology and director of the Women’s, Gender, and Sexuality Studies Program at Northeastern University [and] editor of the gender studies journal Signs,” it’s okay to hate all men, and, further, to ask them to stop running for office and let women take over.

Of course the Washington Post should publish diverse opinions in its editorial section, but this one is pure bigotry—bigotry disguised as feminism. Imagine if the headline were something like “Why can’t we hate white people?” or “Why can’t we hate Jews?”, which, of course, are implicit views of some extremist black movements like the Nation of Islam or anti-Semitic groups like Students for Justice in Palestine. But nobody would publish articles with such titles! When it’s women, though, it’s okay to call for a general hatred of men. Why isn’t that bigotry?

Click on the screenshot to read Walters’s hate-filled piece. 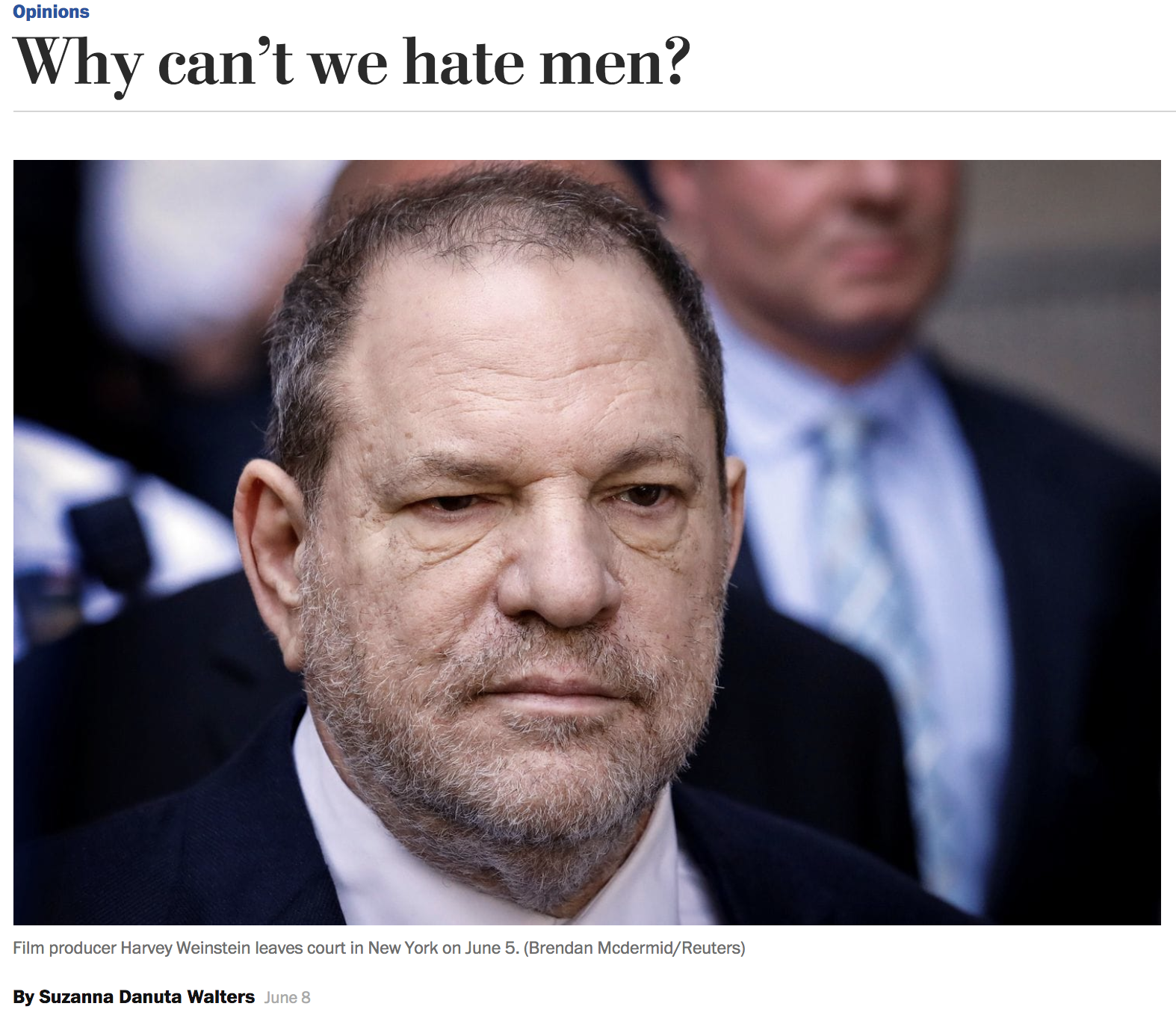 Now of course there is considerable justification to hate the sin rather than the sinner, and the sin is sexism against women. There’s no doubt that women have been hard done by, oppressed (more so overseas than in the U.S.), neglected, kept from having the opportunities or recognition that they deserve, and in general not allowed to “hold up half the sky.” And there’s no doubt that that oppression comes almost entirely from men.

The attitude that women are inferior was pervasive not so long ago, but it’s changing, and it’s changing because women are demanding their rights. Yet people like me, who generally see themselves as pro-feminism—I’ve defined feminism for me as the view that women should be treated as moral and legal equals, and should from the outset be afforded exactly the same opportunities as men—aren’t necessarily on board with those who see sexism everywhere, who conflate unequal outcomes with sexism, or deliberately look for sexism where it might not exist. After all, if by virtue of your Y chromosome you’re automatically placed in a class with monsters like Harvey Weinstein (whose photo illustrates the article), you’re going to be a bit resistant to the message!

I call myself a feminist in the sense above, but I cannot share Dr. Walters’s hatred of men as a class. For one thing, I think sexism and “the patriarchy” are indeed rooted in biology, whether in the greater strength of men that allows them power over women, or in the fact that women are the childbearers, and therefore are often seen as assuming that role naturally and are unsuited for other roles.  Those biological differences have been transformed into sexism as a worldview, but how else can you explain, save through evolutionary differences, the fact that men originally relegated women to roles as breeders and homemakers, and kept them from power? Walters, though, seems to see sexism as having other roots: in some inherent evil in men that is completely independent of biology. She starts like this:

It’s not that Eric Schneiderman (the now-former New York attorney general accused of abuse by multiple women) pushed me over the edge. My edge has been crossed for a long time, before President Trump, before Harvey Weinstein, before “mansplaining” and “incels.” Before live-streaming sexual assaults and red pill men’s groups and rape camps as a tool of war and the deadening banality of male prerogative.

Seen in this indisputably true context, it seems logical to hate men. I can’t lie, I’ve always had a soft spot for the radical feminist smackdown, for naming the problem in no uncertain terms. I’ve rankled at the “but we don’t hate men” protestations of generations of would-be feminists and found the “men are not the problem, this system is” obfuscation too precious by half.

Well, you could make the same argument, as many have for years, about whites and Jews. Whites are responsible for most (but not all) slavery, and they are responsible for oppressing blacks right up to the present day. Is it then not “logical” for blacks to hate all whites? And indeed, some of them do; just browse the Internet. As for Jews, there are many who entertain the idea that Jews hold the levers of power everywhere, controlling banking, the media, and even Hollywood. And we’re not even talking about the “apartheid state” of Israel. Is it not then logical for everyone to hate Jews, too?

I doubt it. Because there are some good people among whites and Jews, as there are among men, and a blanket condemnation of those groups is just another form of bigotry—just like condemning all Muslims because we don’t agree with the beliefs of some of them.

Here’s where Walters argues that sexism has no roots in biology (my emphasis):

But, of course, the criticisms of this blanket condemnation of men — from transnational feminists who decry such glib universalism to U.S. women of color who demand an intersectional perspective — are mostly on the mark. These critics rightly insist on an analysis of male power as institutional, not narrowly personal or individual or biologically based in male bodies. Growing movements to challenge a masculinity built on domination and violence and to engage boys and men in feminism are both gratifying and necessary. Please continue.

Male power may be rife in institutions, but it’s not, at least in the U.S., “institutionalized” in the sense that the government or the law makes women unequal. It doesn’t. Sexism may be pervasive, but it’s not institutionalized. More important, I think sexism is, at the root, based on biology. If it is not, is it just an accident that men oppress women rather than the other way around? (Of course, I am not justifying sexism because of evolved biological differences. My own view, which I’ve expressed frequently, is that those differences are irrelevant to the moral and legal equality of women, and their right to be treated like everyone else.)

Walters goes on to recount the many injustices women experience—”underrepresentation” in high-paying jobs (she takes this as prima facie evidence for sexism, though preference may play a role), sexual assaults and harassment, unequal responsibility for children, and so on. These are undeniable, but, as Steve Pinker has shown, they’re disappearing, and they’re not just disappearing because of women. Many men have realized the nature of these injustices, and are also helping efface them. But to Walters, it’s easier to just hate all men and fight for women’s equality rather than to bother with those apparently rare men who are sympathetic to women’s equality. Not only that, but Walters calls for men to give up political power, apparently asking for a government and economy run solely by women. “Don’t run for office,” she says.  “Don’t be in charge of anything.” Is that for now, or forever? She doesn’t say. But her whole tone is sexist against men, and it this tone that is unproductive. Read this:

So, in this moment, here in the land of legislatively legitimated toxic masculinity, is it really so illogical to hate men? For all the power of #MeToo and #TimesUp and the women’s marches, only a relatively few men have been called to task, and I’ve yet to see a mass wave of prosecutions or even serious recognition of wrongdoing. On the contrary, cries of “witch hunt” and the plotted resurrection of celebrity offenders came quick on the heels of the outcry over endemic sexual harassment and violence. But we’re not supposed to hate them because . . . #NotAllMen. I love Michelle Obama as much as the next woman, but when they have gone low for all of human history, maybe it’s time for us to go all Thelma and Louise and Foxy Brown on their collective butts.

The world has little place for feminist anger. Women are supposed to support, not condemn, offer succor not dismissal. We’re supposed to feel more empathy for your fear of being called a harasser than we are for the women harassed. [JAC: who ever said that?] We are told he’s with us and #NotHim. But, truly, if he were with us, wouldn’t this all have ended a long time ago? If he really were with us, wouldn’t he reckon that one good way to change structural violence and inequity would be to refuse the power that comes with it?

So men, if you really are #WithUs and would like us to not hate you for all the millennia of woe you have produced and benefited from, start with this: Lean out so we can actually just stand up without being beaten down. Pledge to vote for feminist women only. Don’t run for office. Don’t be in charge of anything. Step away from the power. We got this. And please know that your crocodile tears won’t be wiped away by us anymore. We have every right to hate you. You have done us wrong. #BecausePatriarchy. It is long past time to play hard for Team Feminism. And win.

Well, I’m not going to respond petulantly by saying, “Okay, I’m no longer a feminist since it includes unhinged loons like Walters.” That’s equally unproductive.  What we need to do is recognize that views like hers are just as sexist, bigoted, hateful, and extremist as the views she decries. Most important, Walters’s path is the wrong way to have the two sexes live on a basis of equality and comity. South Africa was healed not by stirring up post-apartheid blacks to hate all whites, but by a Truth and Reconciliation movement. That was based on hating the sin but forgiving the sinner. Walters might take a lesson from that. After all, how many men will voluntarily admit that they deserve to be hated, pushed aside, and demonized like Harvey Weinstein?

215 thoughts on “Northeastern U. professor: It’s okay for women to hate all men”