It is increasingly evident that, unlike acceptance of most scientific “truths” (i.e. provisional truths), acceptance of evolution rests not on knowing the many facts supporting evolution, but about being part of a “tribe” (liberals, intelligentsia, and so on) that either accepts evolution, or of a “tribe” (conservative religionists and Republicans) that rejects evolution. Here, for instance, is a section of Steve Pinker’s new book, Enlightenment Now, that gives the results of a recent survey: 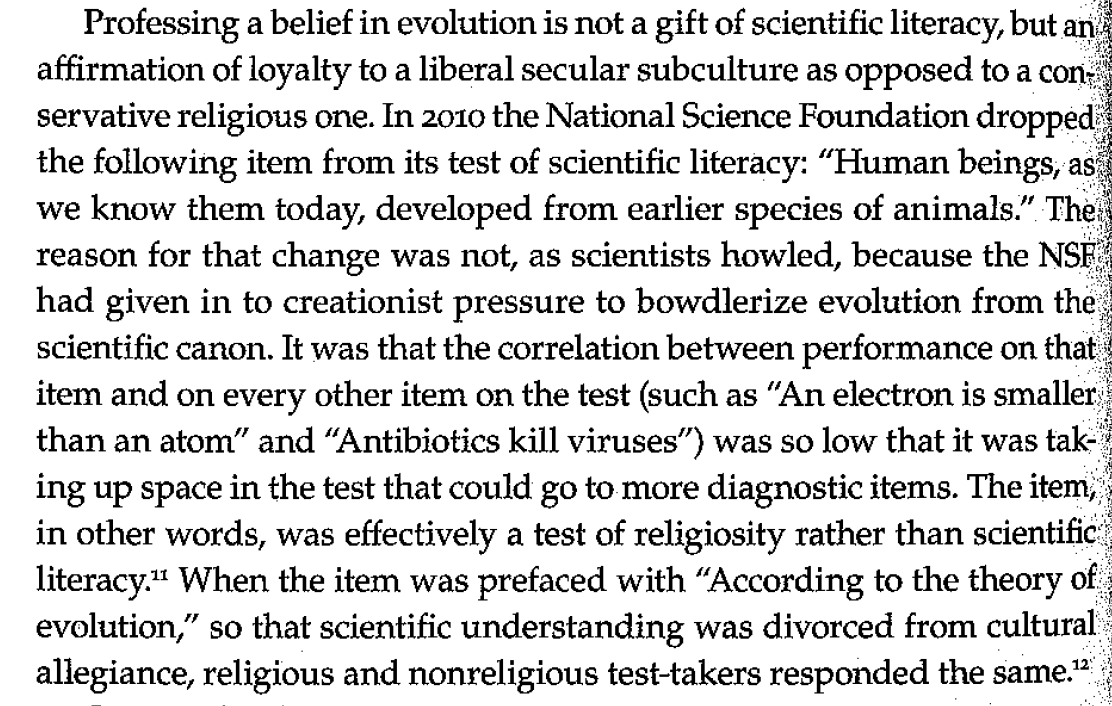 This is not exactly heartwarming to someone like me, whose first and most popular book is a presentation of the evidence for evolution. Did I go wrong trying to do that? Shouldn’t have I been working on getting people to change tribes rather than giving them evidence on a subject about which they’d already made up their minds? Well, yes, that’s one reason I criticize religion—the main constituent of anti-evolution tribalism.

This doesn’t just go for evolution. As you might expect, tribalism affects the acceptance of science when it comes to other stuff like global warming and vaccination, although in the case of global warming, at least, the tribalism is based more on politics than on religion. Regardless, however, when it comes to accepting “controversial” theories, scientific facts take a back seat to ideology and the desire to flaunt your membership credentials to your tribe.

A new piece in Quillete by Ryan Glaubke gives other evidence for a tribalistic effect on science acceptance. (Glaubke is a grad student at Old Dominion University in Virginia, studying climate science.) In “Communicating science in an era of post-truth” (not a title I like), he contrasts the “deficit model” of science acceptance (your acceptance is based on understanding the phenomenon) with the “cultural cognition model” (your acceptance of science is based on your perception of your social identity, and the beliefs that jibe with others of that identity). To Glaubke, the data so far suggests that the latter model is more important:

Yet the deficit model cuts against a mounting body of evidence that suggests literacy is not the primary contributor to the public’s attitude towards science. For instance, a group of researchers led by Yale Professor Dan Kahan conducted a survey of over 1,500 U.S. adults to assess the relationship between the public’s understanding of climate change and their assessment of the risk it poses to our society. They discovered that participants with an extensive understanding of the science were actually less concerned about the potential devastations of climate change, a finding that directly conflicted with the predictions of the deficit model. In its place, Kahan offered what he called the cultural cognition thesis. This holds that an individual’s perception of science—and, in turn, assessment of risk—is primarily influenced by perception of social identity.

Kahan’s theory is supported by a recent study conducted at the Philipp University of Marburg in Germany, where researchers demonstrated that a participant’s interpretation of science—as well as their opinion of scientists—is significantly influenced by their perceived membership of a social community. When presented with evidence that conflicts with their predisposed worldview, participants were more likely to doubt the integrity of the science and the credibility of the scientist. The implication here is that when our deepest convictions are challenged by contradictory evidence, we tend to dismiss the science and cling to our beliefs with even greater vehemence—a phenomenon known as the backfire effect.

These studies suggest that the implementation of the deficit model and its associated attempts at ‘educating’ the public only exacerbate the divide between experts and lay citizens. Such attempts antagonize the very people with whom professional scientists need to connect, reinforcing the perception of an ivory tower and further isolating academics from the general populace. The deficit model approach, then, cannot be the solution to the polarization we see today. As Will Storr succinctly put it in his 2014 book The Unpersuadables: “Reason is no magic bullet.”

If reason and data don’t work, then, what do we do? The only solution, according to Glaubke, is to make people think that accepted science is not contrary to the tenets of their tribe. It is, as we discussed years ago with reference to the ideas of Chris Mooney and Matthew Nisbet, to engage in “framing.” In the case of religion, for instance, you have to trot out religious scientists like Francis Collins to show that you can be religious and also accept evolution. In other words, you have to show people that someone they trust—a member of their tribe—accepts the science they reject.

It follows, then, that in order to effectively communicate science in our modern, socially-compartmentalized society, scientists must tailor their messages to meet the concerns, priorities, and values of those they wish to reach. By reframing the science to meet the needs of the general public, communicators are able to transcend our faulty evolutionary design—tribalism, belief, our affinity for emotionally-laden thinking—by leveraging their influence over our information processing, much like a Trojan Horse that allows facts to clear the mental barriers we erect against uncomfortable truths. I call this the adaptive model of science communication.

A few recent examples illustrate the method’s utility and success.7 In an effort to connect with evangelicals about the importance of environmental conservation, the entomologist and author E. O. Wilson argued in his book The Creation that, as the species granted dominion over this world by god, we have a moral duty to act as responsible stewards of the environment. Using this moral framework, Dr. Wilson was able to reach a new audience by carefully linking the urgency of ecological preservation to the values enshrined in the Bible.

In a similar attempt to reach the religious community, the National Academies and the Institute of Medicine framed their joint report on the teaching of evolution in science classrooms by moving away from the antagonistic ‘science vs. religion’ narrative, and suggesting that science and religious faith can be reconciled. By highlighting religious scientists (such as NIH Director Dr. Francis Collins) or religious figures who accept evolutionary science (such as the Archbishop of Canterbury Justin Welby) religious communities could be persuaded that they do not have to choose between empirical evidence and their religious identity. This is a controversial idea, but a useful tool nonetheless.

Somehow I’m unable to do this. I am not constituted in a way that can tell people that science and religion are compatible, for I feel strongly that they aren’t. This does not mean that, when trying to convince people of the truth of evolution (I don’t talk about global warming, as it’s not my area of expertise), I tell them that religion is bunk and that they’re morons if they’re creationists. Clearly you won’t get anywhere by antagonizing your audience at the outset. This is why I try to separate my criticisms of religion from my advocacy of evolution, although in evolution talks I’ll often end, after giving lots of evidence, by mentioning that the reason people reject such good evidence is religion. I don’t mix the magisteria, to use Gould’s phrase, but I don’t water down my criticisms of religion, either, nor pretend that there’s no conflict in accepting Jesus and accepting science. Of course there is!

And there’s an important bit missing from Glaubke’s article: evidence.  Although he says that Wilson’s book illustrates the “utility and success” of framing, as does as the National Academy Reports and other hypocritical incursions of such atheistic bodies into theology, there are no data showing that these methods change minds, or, more important, change them more than teaching under the “deficit model.” All he says is that E. O. Wilson or the National Academy “reach a new audience.” The important thing, though, is whether that audience is persuaded. And about that we know—nothing.

I know from experience, and the many emails I’ve gotten, that my book Why Evolution is True did change a number of people’s minds about evolution, turning them from creationists into evolution-acceptors. I also know that Richard Dawkins’s books on both evolution and religion have facilitated both acceptance of evolution and rejection of religion, as evidenced by the hundreds of letters in his Converts Corner site (note: there are 160 pages of letters). In other words, minds have been changed not by framing, but by giving people the unvarnished truth. (A lot of people have come to accept evolution simply as a byproduct of rejecting religion, for there’s no reason to be a creationist unless you’re religious.)

Now where are comparable stories supporting Glaubke’s thesis? Where are the hundreds of pages of letters saying, “You know, I thought evolution was a crock of bullshit until I heard Francis Collins say that evolution was true. Now I accept it!”.  I’m sure the method has worked for some, but there are simply no data supporting it. Likewise, BioLogos, the organization founded by Collins and Uncle Karl Giberson to get evangelical Christians to accept evolution, has been pretty much a dismal failure. Instead of roping thousands of evangelicals into the Tent of Evolution, it’s become a venue for apologetics, with Christians arguing over issues like whether there still could have been a real Adam and Eve, even though evolutionary genetics tells us otherwise. It sure hasn’t made evangelicals flock to Darwinism!

Let us all, then, act according to our constitutions. If you think people can be religious and accept evolution, by all means tell them that, and give them something to gnaw on. If you think that religion and evolution are inimical, as I do, then don’t pretend they are. Teach people the evidence for evolution and let them mull it over. It’s worked for me! Or criticize religion as being an antiscientific purveyor of myths and fairy tales. That’s worked for Dawkins and others. But let us not pretend that the best way to learn science, despite the survey data of Kahan et al., is to communicate the idea that science is consonant with the values of your tribe. That survey data might be correct, but the proof is in the outcome—and we have no evidence that the “trust-me-I’m-one-of-your-tribe” model is better than the deficit and the antagonism-to-religion models.

65 thoughts on “How best to communicate science?”