I think people have seen on this site the way that the media has distorted the scientific data on epigenetics, with newspapers and popular books implying that adaptive environmental modification of an organism can be inherited, which constitutes a revolution in the way we think about evolution. Well, were that true it would be a revolution, but we have no evidence of such environmental modification being inherited over more than two generations, much less for any of that modification being adaptive.

This kind of distortion is pervasive in much of the press, though are notable exceptions (the New York Times, for instance, almost always reports science accurately and responsibly).

So what we have here is simply an association study, and the meaning of the associations are unclear. That doesn’t mean the paper isn’t important or interesting, because it could, among other things, help us zero in on genes affecting, say, Parkinson’s disease, which in turn might help find a cure. Nevertheless, that’s not why the press picked this up—see below.

Click on the title to go to the paper. 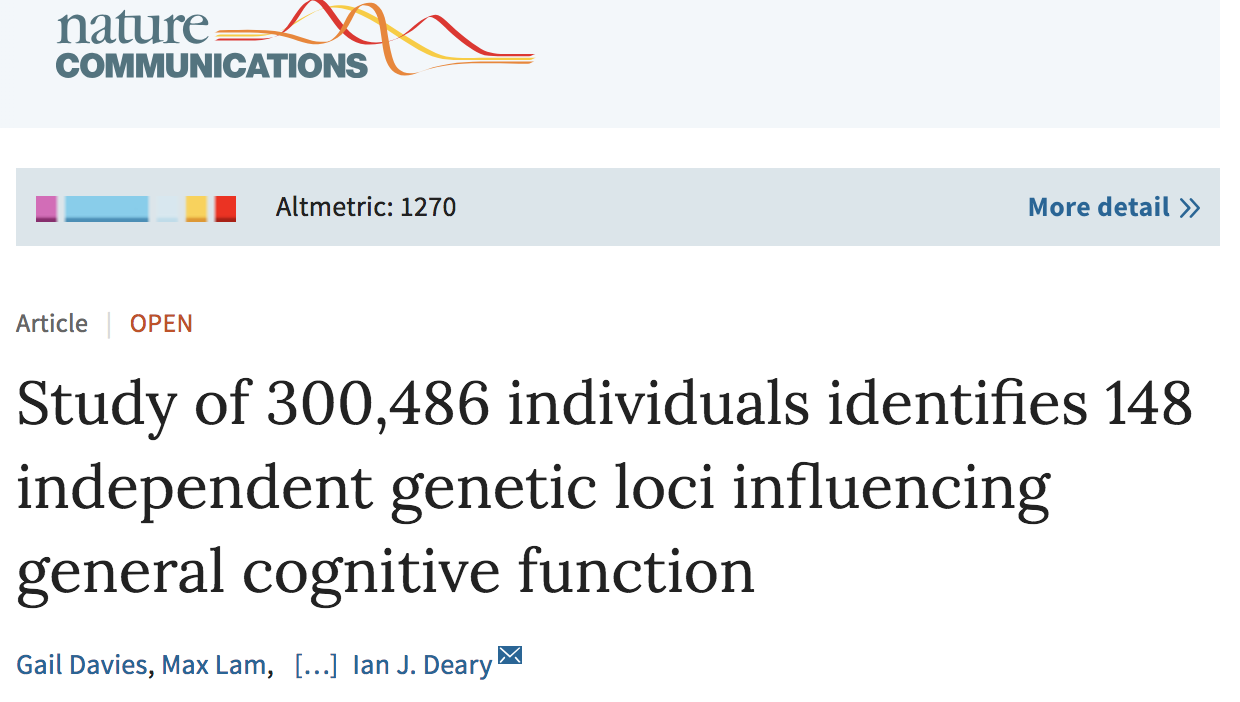 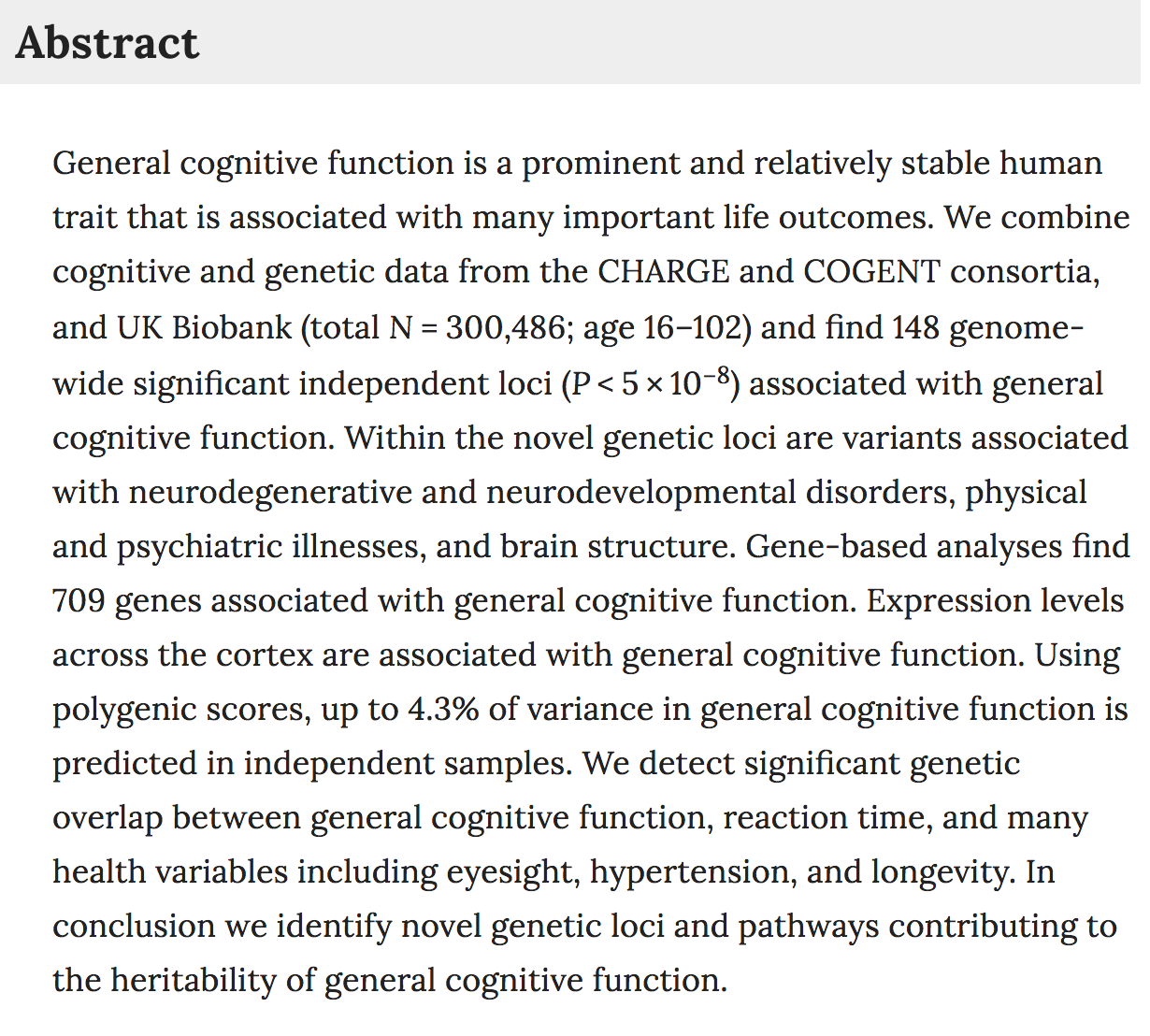 First, I’ve put the list of authors below to show you how many people participated in doing the science in this study one way or the other. The number of authors of papers is growing over time, partly because work like this is intensely collaborative, requiring work by many labs, but also because competition for scientific status is fierce, and these days some people tend to put their names on papers when they’ve hardly done any of the work). I have no idea who did what here, but it doesn’t matter: just look at the list of authors. Author #8 is Stuart Ritchie of the University of Edinburgh, who pushed backed against the misrepresentation of this paper by the press: 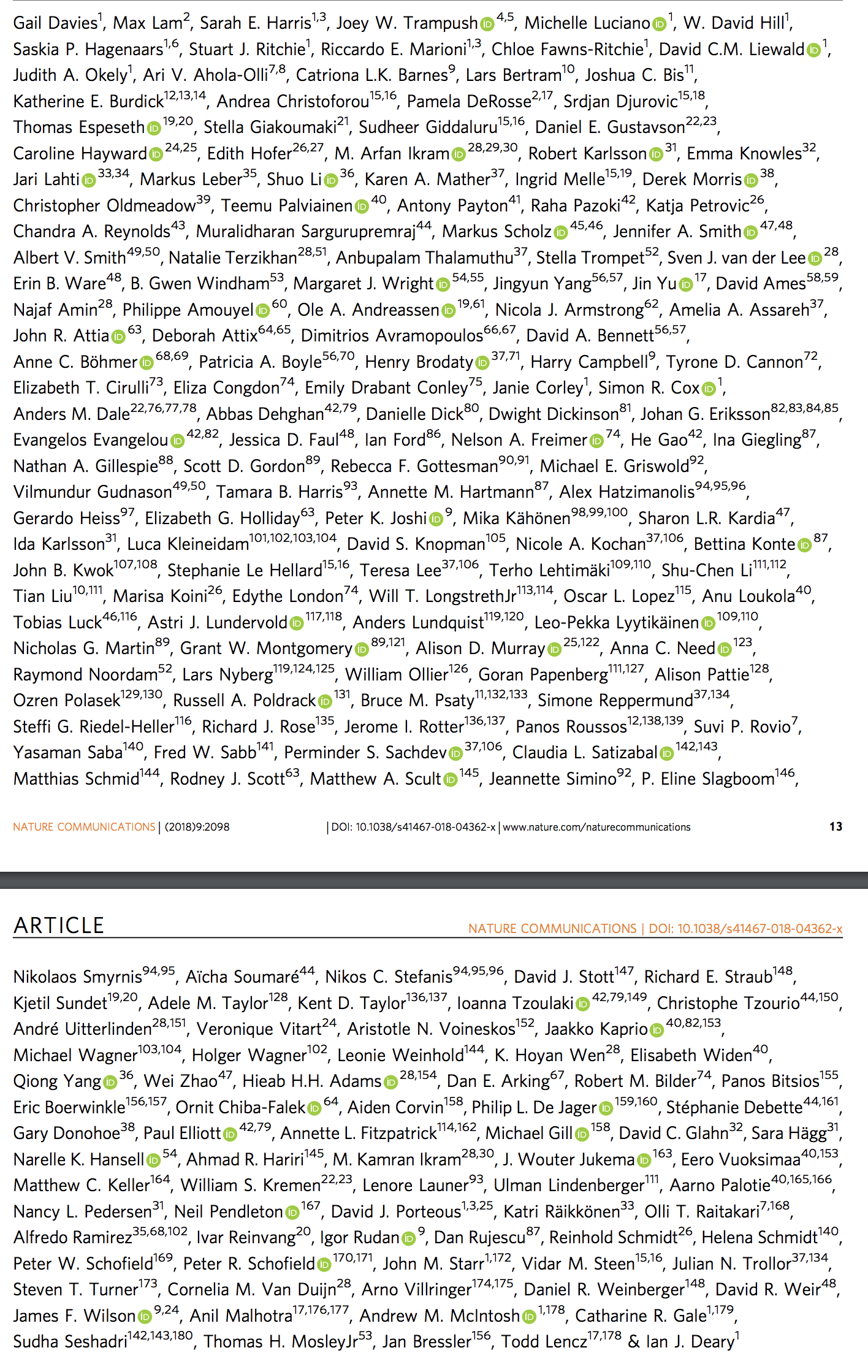 Here’s the series of tweets emitted by Ritchie showing how the Torygraph and other venues like the Guardian distorted the finding that some of the genetic variation affecting cognitive ability mapped to regions of the genome associated with better or worse eyesight (tweet stream here). 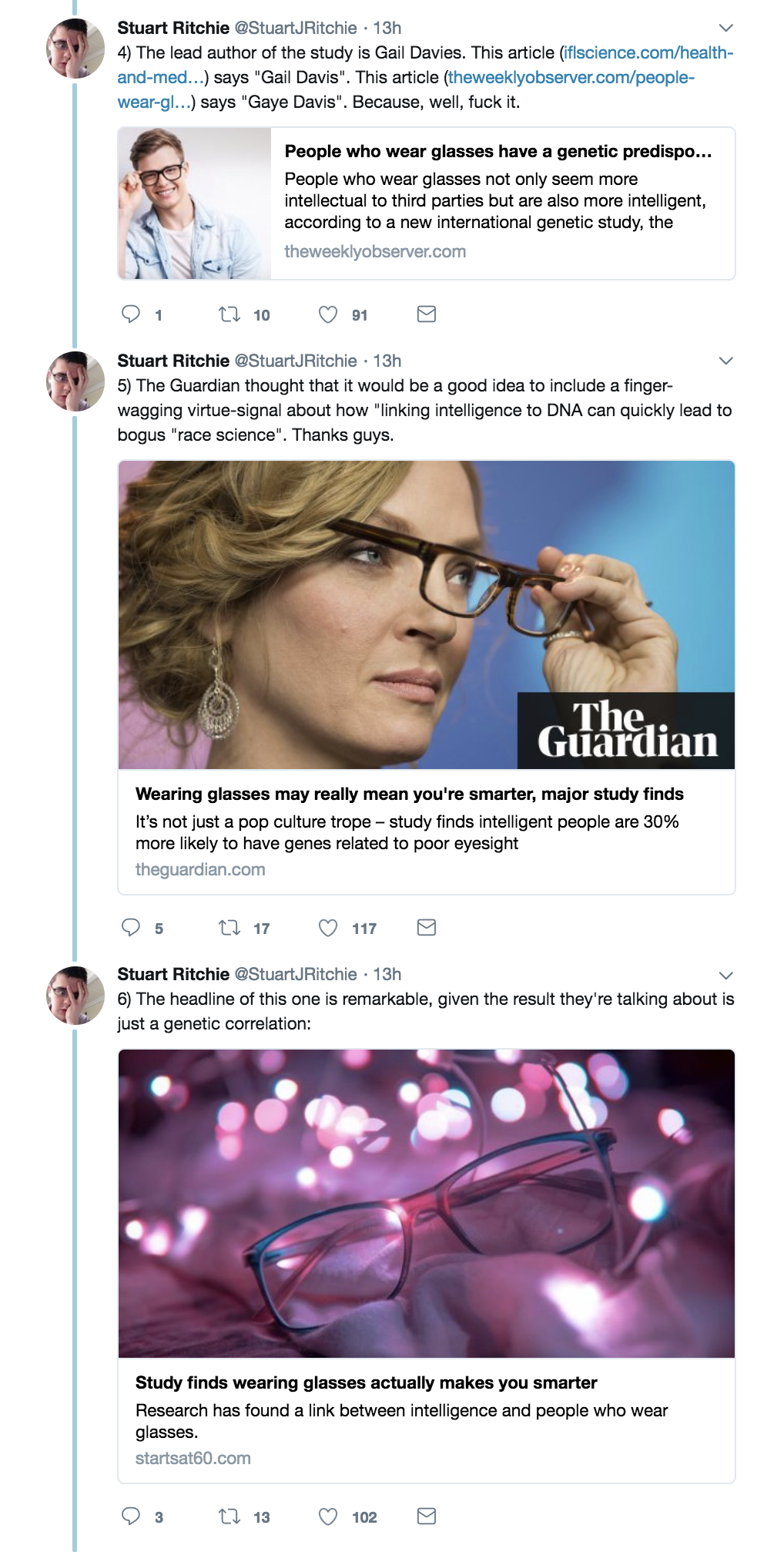 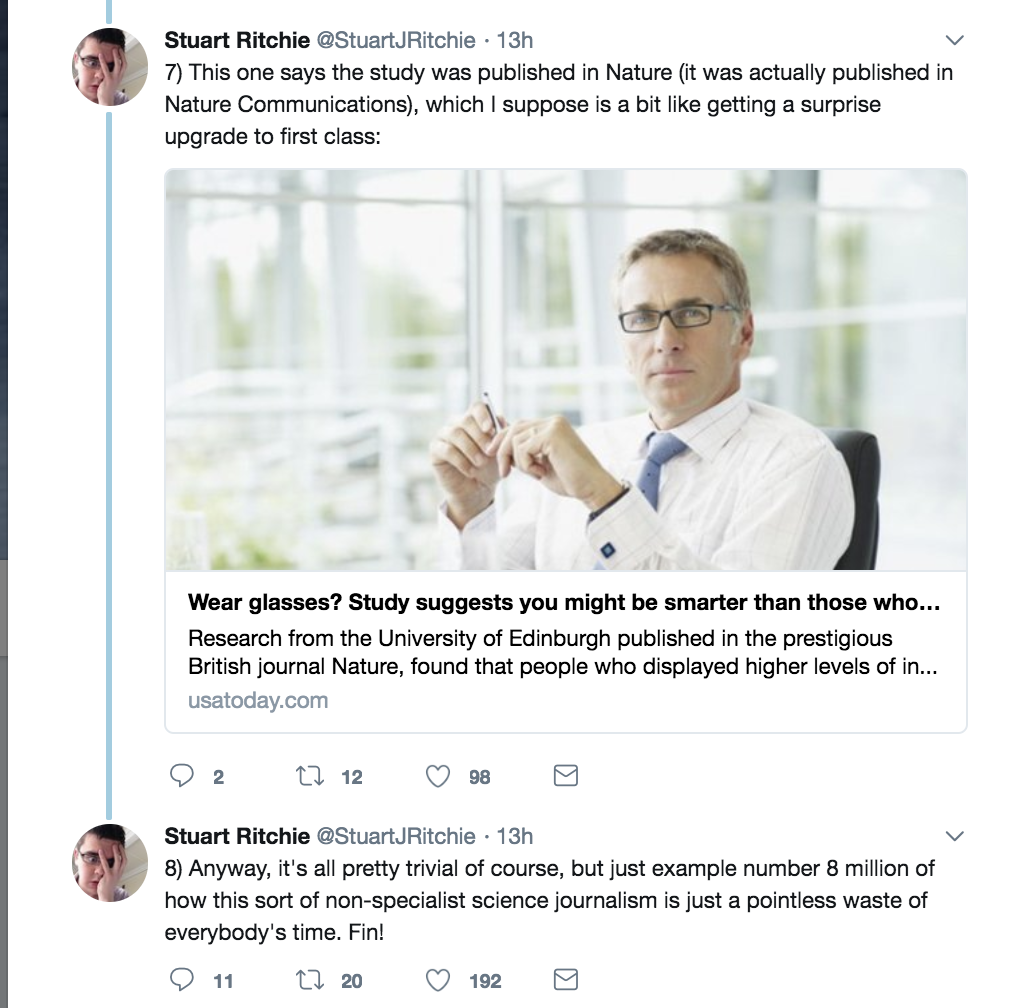 Remember that the genetic correlations are observed between variation in a region of the genome and cognition; it’s not strong evidence that “genes affecting eyesight” also have a pleiotropic (associated) effect on cognition. And, of course, the Guardian had to “virtue signal”, as Ritchie aptly puts it, about the dangers of studying the genetics of cognition because of its linkage to “race science”:

While being more intelligent may be linked to poor eyesight, it’s also connected with a lot of positive health benefits. Researchers found negative correlations between cognitive function and a number of health problems, including angina, lung cancer and depression.

Of course, it’s important to remember that these are all simply correlations not conclusive links. And it’s worth noting that what constitutes intelligence is subjective and can be difficult, if not impossible, to measure. Further, linking intelligence to DNA can quickly lead into bogus “race science”.

Yeah, right: I’m sure these authors are all racists who are going to promote bigotry!  The Guardian’s article on this piece and its virtue-signaling, like much of the Guardian itself, is trash.

What Ritchie demonstrates by looking at the popular reporting of his piece is how the press readily distorts reporting to favor what’s sensational, even if it’s blatantly wrong.

How to avoid this? It’s easy! Simply vet your story to scientists before it’s published—something that any journalist can do, but few are be arsed to perform. Just pick up the phone and call an author like Ritchie—or any geneticist who does association studies (there are many)—and say, “is this right?”.

Thank your lucky stars that Professor Ceiling Cat (Emeritus) is here to set you straight and point you to Ritchie’s tweets. Maybe I should charge for “sciencesplaining”!

55 thoughts on “The media bollocksed up a science story”