Arizona has revised its educational standards for the first time in 15 years: these guidelines cover kindergarten through grade 12 (age about 18), and they’ve watered down the evolution standards, deleting several mentions of the “e-word” and severely qualifying others. You can see the reports below, at The Hill (click on screenshot), at the Arizona Republic, or at The Scientist.

You can reaed the draft standards here. The word “evolution” appears only two or three times, once at the bottom of the list below, referred to as a “theory”, which of course is correct in the scientific sense, but evolution is also a fact, and the use of “theory,” without explaining its more complex scientific meaning to the kids, is clearly meant to impugn neo-Darwinism. 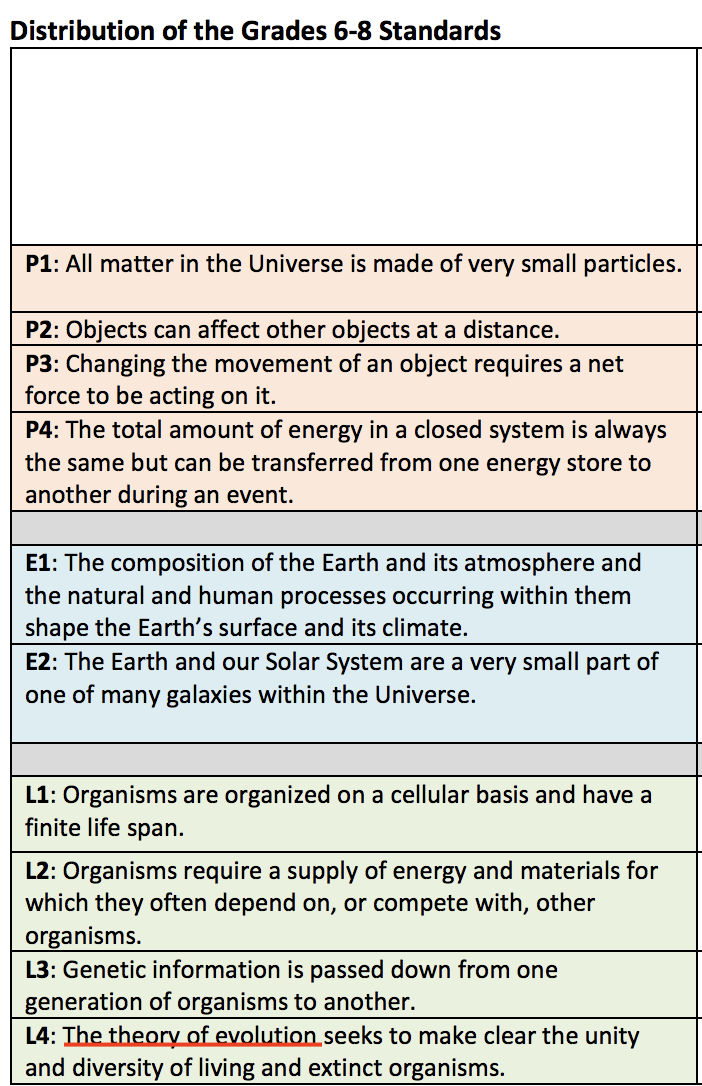 And the reports make it pretty clear that Diane Douglas, the Arizona Superintendent of Public Institutions, who thinks that Intelligent Design should be taught along with the “theory” of evolution, is responsible for these changes. She claims that she isn’t, but who can believe that?:

“What we know is true and what we believe might be true but is not proven and that’s the reality,” Diane Douglas, state superintendent of public instruction, tells 3TV/CBS 5. “Evolution has been an ongoing debate for almost 100 years now. There is science to back up parts of it, but not all of it.”

“Not proven”!!!?? She fails to clarify, of course, that nothing is “proven” in science: we just get better and better explanations. But if you use “proven” in the vernacular sense, as something on whose truth you’d bet your house and life savings, then yes, evolution is as “proven” as is the fact that the Earth goes around the Sun and that benzene has six carbon atoms arranged in a ring.

Further, the “ongoing debate” about evolution is not whether it happens, and whether natural selection helps cause it, but about various arcane things that are of no relevance to secondary school education (i.e., what are the relative importance of the several proposed mechanisms of sexual selection?).  Here Douglas is duplicitously impugning the entire theory of evolution by lying: by implying that “evolution has been an ongoing debate”, meaning “whether evolution is true.” This woman does not belong on any committee having to do with education, as she’s a lying weasel, and I don’t say that lightly. Why does she do that? The answer is below (I bet she’s religious, too):

Although Douglas has publicly expressed her support for creationism and intelligent design in the past, she emphasizes that there are no moves to include any reference to them in the new standards. “My personal belief and my professional opinion are two very different things,” she tells 3TV/CBS 5.

The draft standards have not been well received by many school officials, teachers, and parents in Arizona. “Parents like me should be concerned because our kids need to be prepared to compete in a scientifically-sound world,” Tory Roberg, director of government affairs for the Secular Coalition for Arizona, tells The Arizona Republic. “Colleges and universities use evolutionary basics and build on this in advanced science classes. We can’t give our kids a second-rate education. We must demand the best.”

One Department of Education employee has reportedly already resigned over the proposed alterations to the standards. “I was directed to make changes to adjust the wording to ‘evolution,’” Lacey Wieser tells 3TV/CBAS 5. “I turned in my resignation and said, ‘I will not be part of this.’” She left the job in February, she adds. 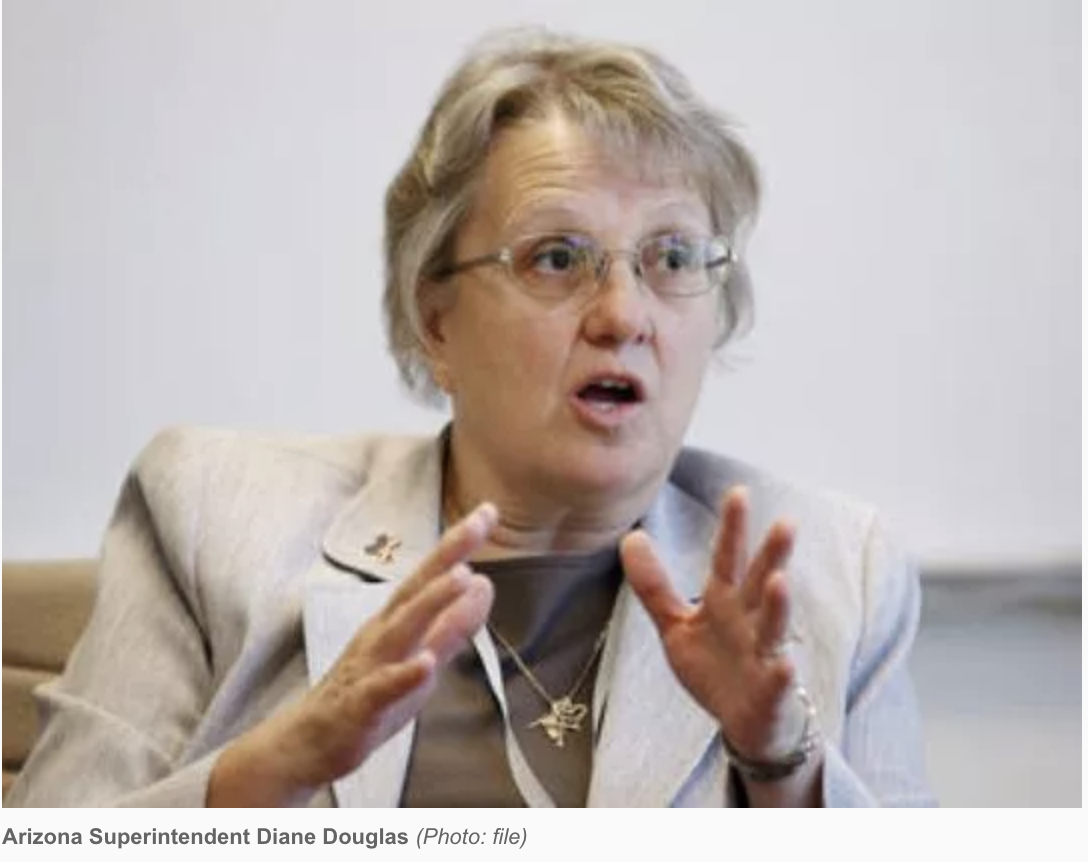 Some of the changes outlined by the Arizona Republic:

In the draft, the word “evolution” is crossed out multiple times and replaced with different phrases which were in bold, underlined or written in the color green.

In one area of the draft focusing on life science essential standards for high school students, “evolution” is replaced with the words “biological diversity.” This section reads: “Obtain, evaluate, and communicate evidence that describes how inherited traits in a population can lead to evolutionbiological diversity.”

In an area regarding the “Core Ideas for Knowing Science,” it reads, “The theory of evolution seeks to make clear the unity and diversity of organisms, living and extinct, is the result of evolutionorganisms. Our [sic] countless generations changes resulting from natural diversity within a species are believed to lead to the selection of those individuals best suited to survive under certain conditions.”

Get that— “changes in natural diversity” are “believed to lead to the selection of those individuals best suited to survive.” Not only is the “believed to” a weasel phrase, but this gets it exactly backwards: it is natural selection (and other evolutionary forces like drift) that cause changes in species—as well as the appearance of new species. The changes don’t lead to natural selection! How savvy are these people.

Here are some of the changes from the draft document:

And this, mentioned above:

Naturally, educators, as well as the National Center for Science Education, have objected to this dilution of truth, and you can see their statements at the three links above (especially the Arizona Republic).

This effacing of truth comes, of course, from religion: Arizona is a conservative state and full of believers, and it is those states that most strenuously object to evolution. As I’ve always said, if there were no religion, there would be no creation myths, and thus no reason to object to the truth of evolution. It is religion, and religion alone, that leads to opposition to evolution. Don’t let anyone tell you otherwise, because the evidence for evolution is as strong as that for any other biological theory, yet it is evolution alone that is the subject of public disbelief in America.

If you want to register your reaction to these changes, simply go to this site and make comments, which will be given to the standards committee. You have until TOMORROW! (I’ve said my piece on that site.) If you object to these shenanigans, and especially if you’re an educator or a scientist, Professor Ceiling Cat (Emeritus) urges you to weigh in. You’re supposed to fill in the county in Arizona where you live, but I didn’t do that, and they still accepted my comment. But of course Arizona residents are the most important commenters.