Here’s a comment I got on my post “Social Justice Warrior would rather let someone die than donate her organs, because they might go to rich or “overeducated” people“. That post, which was one of the most ridiculous manifestations of Authoritarian Leftism I’ve ever seen, recounted the views of one Kristel Clayville, a visiting assistant professor of religion at Eureka College and a fellow at the MacLean Center for Clinical Medical Ethics at the University of Chicago. My university! (She’s also a minister of the Disciples of Christ).

Because Clayville believes there are social inequities in the system of distributing harvested organs for transplantation, she took the “Screw it: I’m taking my liver and going home” attitude, saying that she was keeping her damn organs until the system is fixed to her liking. Well, plenty of poor people do get organs, and her attitude is selfish, stupid, and reprehensible.

Here’s one almost as reprehensible; a comment from a reader who says that God doesn’t like organ donation either: 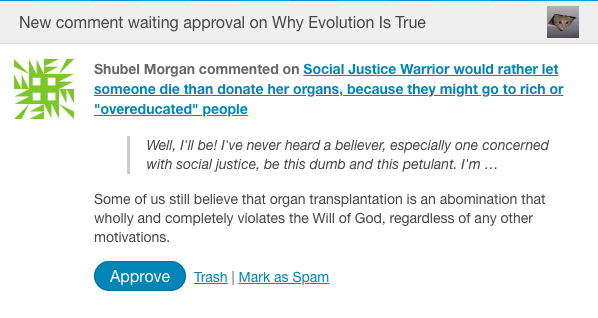 I’ve approved that comment, which you can find here if you want to have a discussion. I am very curious why God doesn’t want organ transplantation since it saves lives. Does he want souls in Heaven with all their organs intact? (But He could have the power to regenerate them–except in dogs; just ask Edward Feser.) And what about the souls that will wind up in Hell; can’t they give their organs to one who is Heaven bound? Even Jehovah’s witnesses, who don’t allow blood transfusions, aren’t opposed to organ transplantation so long as the blood is removed from the organ.

This ability to know the Will of God fascinates me, but I can’t pursue it as I’ll soon board my plane.