On the morning news, I heard a report that a Muslim group has put up pro-hijab billboards for six weeks on Interstate 55 and the Tri-State Tollway outside Chicago. Here are the billboards. 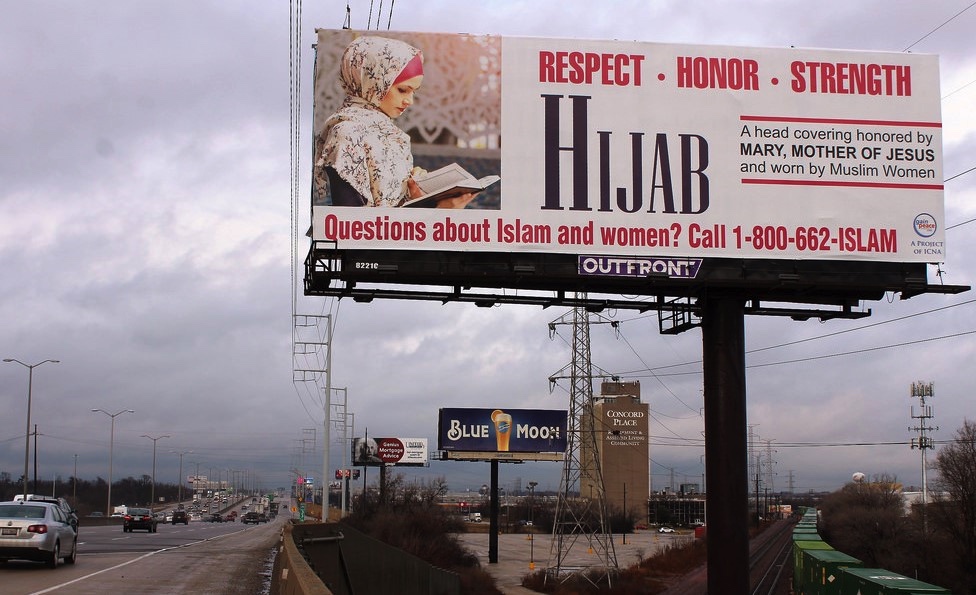 Note that they also appeal to Christians by saying that “Blessed Mary wore the hijab”. How do they KNOW that?  Yes, Mary is often depicted wearing a head covering, but, as you see below, sometimes her hair is showing quite a bit. It’s not really a hijab, unless you call any woman wearing a headscarf a hijabi. 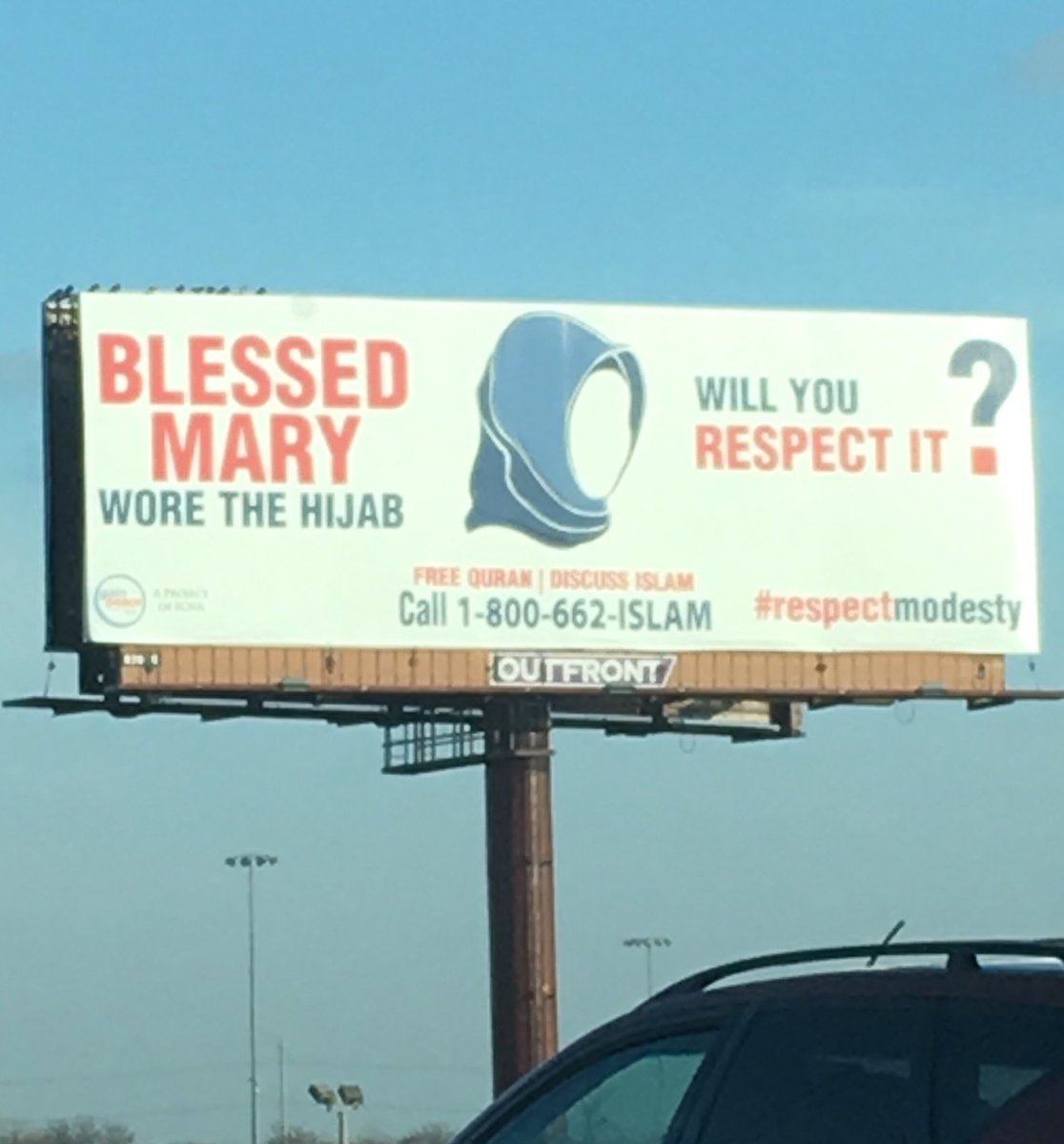 The billboards are part of a campaign to defuse bigotry against Muslims (well, only the ones wearing hijabs), and good for them. Anybody who attacks or disses, or insults a woman who wears a Muslim headscarf, or any Muslim garb, is reprehensible. That is true “Muslimaphobia.” But why did they have to choose a symbol of oppression, and request that we “respect and honor it”? No, I won’t respect it, though I won’t insult its wearers, either.

The religious reason for the garment, as we all know, is one that’s evolved after the Qur’an, since there’s no dictate in the Qur’an itself to cover your hair. And that reason is because Islam places the onus on women to avoid tempting men. Covering the hair is designed to prevent men from showing their uncontrollable lust, and that often goes along with other “modest” garments.  It is, in effect, a form of religious slut-shaming. It is not a sign of women’s strength; it’s a sign of submission to the will of men.

Yet those Western feminists who say, correctly, that it is the responsibility of men to police their own behavior, and that women can bloody well dress as they want, nevertheless not only remain silent about the hijab—a symbol of men’s dominance over women—but even extol it as a garment of virtue.  And so all the news I’ve heard about this has preached the message of the billboards.

Fine—it’s not the place of the news to remind people why the hijab exists. But we can do such reminding, and emphasizing that, in many places in the world, wearing a scarf or niqab or burqa is not a “choice,” not an “option.” Even in the West, where there are no laws mandating that Muslim women wear it, there’s no doubt that a type of social, familial, and peer pressure (including in Muslim schools) forces many women and girls to veil.

The billboards are the first of their kind in the country, designed by a group called GainPeace, which encourages non-Muslims to call the organization and ask questions to gain a better understanding of why women wear the hijab. The billboards draw a similarity to the Christian religion where Mary is considered the mother of Jesus. She also wore a hijab.

The billboards are located on Interstate 294 near Interstate 88, and Interstate 55 and LaGrange Road.

Well, of course they’re not going to tell you the real reason women wear the hijab, because that doesn’t sound so good.

Here’s the CBS 2 ad I saw this morning, with the following video and an article:: “Chicago’s hijab billboard campaign seeks to educate“.

Note that the hijabi was harassed by someone trying to force her off the road, and others saying, “Go back to your country.” That’s bigotry, pure and simple. Never should we do that! But Sara Ahmed adds this:

Well, perhaps it’s 100% “her choice”. I don’t automatically believe such assertions, even from someone in the U.S. What that means is that in the absence of any social pressure, or of people around her all wearing the hijab, she’d still wear it. And that’s hard to know. And of course wearing the hijab oppresses Muslim women: that’s why it’s there!

Dr. Sabeel Amhed of the group Gain Peace hopes the billboards will reverse negative stereotypes he says some people have about the hijab.

He says the clothing article represents honor, chastity and respect – not subjugation, as some critics may suggest.

Ahmed says the billboards also connect the hijab with similar clothing worn by the Virgin Mary, as a way to show the virtue of the hijab.

Insofar that it’s “virtuous” to wear the hijab, it’s a kind of artificial virtue forced on women by men. It’s the same kind of forced “virtue” that leads to honor killings. And it’s reprehensible.

Yes, wear the hijab if you want, but remember what it stands for. I will tolerate it; I won’t treat anyone wearing one as less worthy than anyone else; but no, I will not “respect” it—no more than I respect any other action that arises from superstition.

Finally, here’s Pliny the in Between’s take from The Far Corner Cafe: 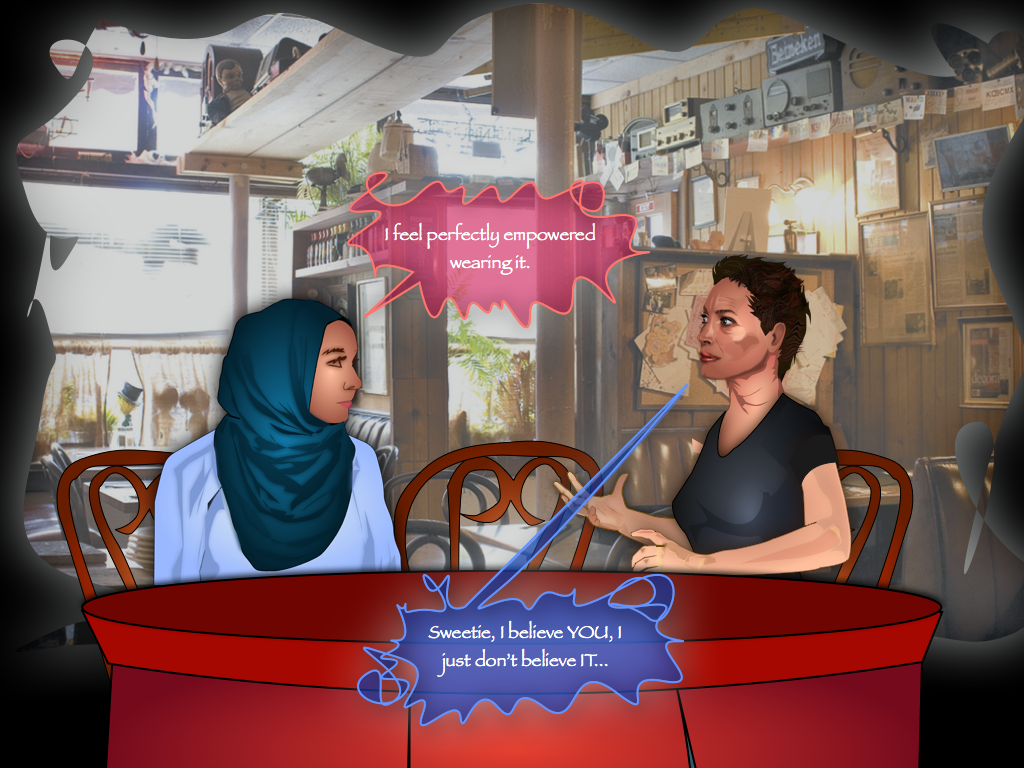