My friend and colleague Professor Brian Cox is not only a Professor of Physics at the University of Manchester, he is also Professor for Public Engagement in Science at the Royal Society in London. As part of this, he decided to interview a number of Fellows of the Royal Society about their scientific heroes, in a series called People of Science. These brief interviews are informal,  insightful and fascinating. The one that will probably interest readers most is the one with David Attenborough, on Darwin. Here it is, it’s only 5 minutes long:

[Gratuitous comment by JAC: I have one beef with what Sir David says about The Origin at 3:50:

“What is marvelous about it is that anybody can read any page and it makes absolute sense. It’s not full of jargon; it’s full of argument and observation.”

True, it’s full of argument and observation, and Darwin generally avoids jargon. But it’s simply not true that anybody can read any page and make sense of it. Sometimes it’s hard going, even for a biologist. For those who believe Sir David’s words, I challenge you to read the chapter on “Hybridism”. My students often objected to my requiring them to read it because they weren’t used to the dense Victorian prose. (Eventually I gave up and went to the “abridged” Origin. That, too, was a failure.)  I should know, because I’ve read the book a gazillion times and the margins are full of question marks. Here’s my copy of the first edition, dog-eared, taped together, and covered with scrawls. Now that the pages have started falling out, I’ll have to retire it.  If you haven’t read this book, you can’t consider yourself educated!] 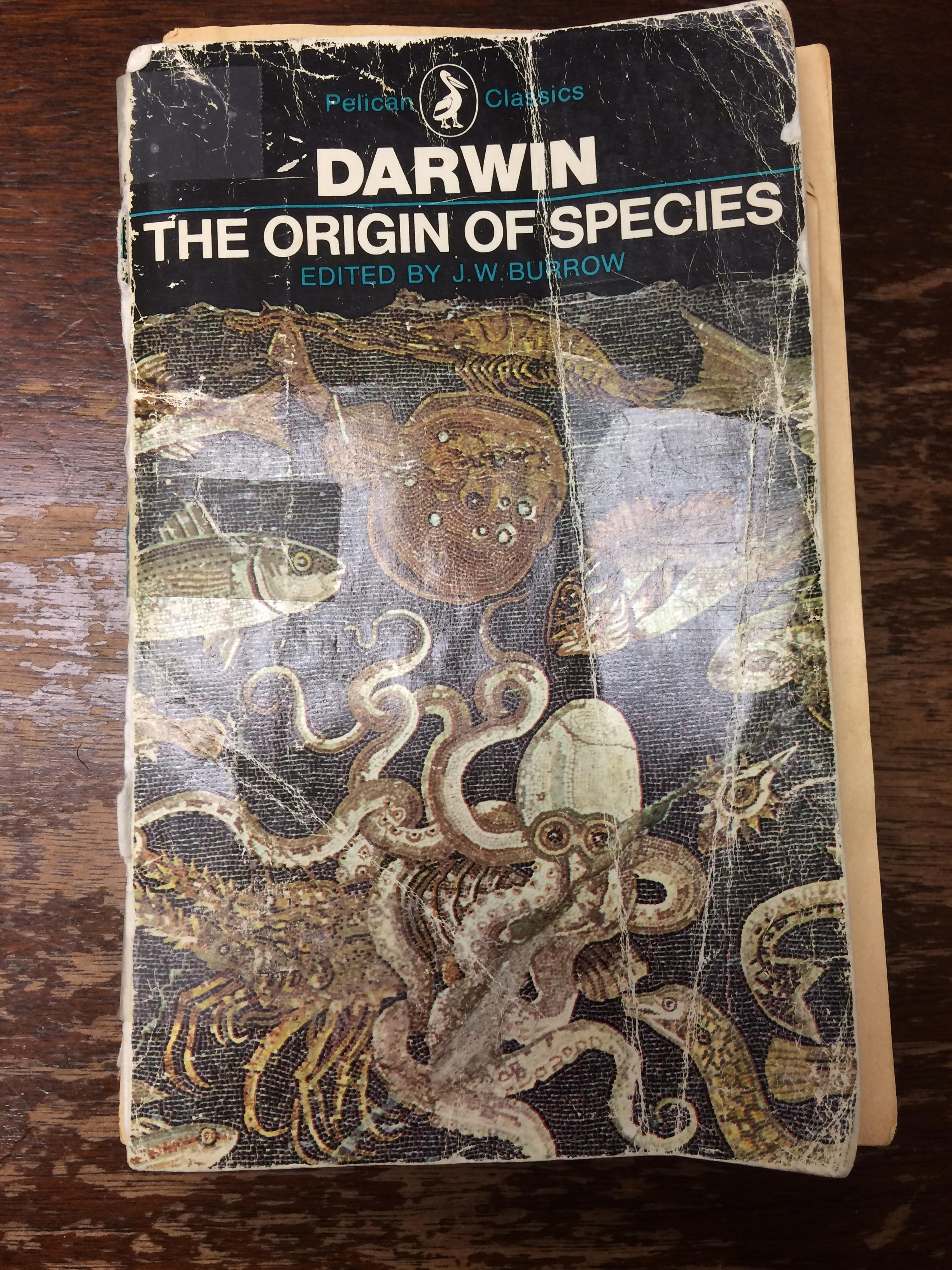 Readers might also like this interview with Sir David Spiegelhalter about the work of amateur mathematician Thomas Bayes and of statistician Ronald Fisher (includes some practical experimentation!):

This one is about Alexander Fleming, and is with Brian’s fellow Manchester graduate, Dame Sally Davies, England’s Chief Medical Officer (to do with public health):

The other three interviews are developmental psychologist Uta Frith discussing Alice Lee (no, you haven’t heard of Lee), author Bill Bryson (yes, he is an FRS, or an honorary one, anyway) on Benjamin Franklin and President of the Institute of Physics Professor Julia Higgins on Michael Faraday.

The interviews all take place in the library in the Royal Society’s home on Carlton House Terrace in London (you’ll notice a bust of Darwin in the background). Until 1939, the building was the German Embassy, before being closed for obvious reasons. In a nice twist, when General de Gaulle came to London in June 1940 following the fall of France, the Free French, as they became known, had their headquarters at the other end of the terrace. The Royal Society moved in there after the end of the war.

28 thoughts on “Cox interviews Attenborough on Darwin (and other interviews)”