An anonymous reader sent me this announcement for a course at Harvard, and at first I thought it was an enormous joke. Now I’ve learned it’s for real. For one thing, there is indeed a professor at Harvard called Annabel Kim: she’s an Assistant Professor of Romance Languages and Literatures. And her c.v., here, lists a related book in progress:

Cacaphonies: Toward an Excremental Poetics (in progress)

But the ultimate proof is that Harvard lists the course in its catalogue, reproducing the text beneath the poster’s pile of friendly poo. The course description (the same as on the poster) is below, and I’ve bolded a few part. But hell—the whole thing should be bolded!

French literature, from the Middle Ages to today, has been consistently and remarkably scatological. Fecal matter is omnipresent in works and authors that we consider canonical (e.g. the fabliaux, Rabelais, de Sade, Beckett, Celine) and yet its presence has been remarkably submerged or passed over in readerly and critical reception of modern and contemporary French literature. This course proposes to take this fecal presence seriously and to attend to the things it has to tell us (hence the plurality of cacaphonies) by starting with the following premise: If literature is excrement, then the canon is a chamber pot. We will focus on the twentieth and twenty-first centuries and read a diverse range of scatological texts in order to use the scatological as a means to: 1) Theorize an excremental poetics where excretion provides a model for the process of writing. The task of excretion, which translates into concrete form our experience of the world (we excrete what we take in, processing and giving it new form), is also the task of literature; 2) Allow for a new interrogation and critique of the canon and the ways in which it serves to conceal, contain, sanitize, and compel culture; 3) Provide another angle from which to approach the question of gender and writing, as gender organizes both literature (e.g. the paucity of canonical women writers) and defecation (e.g. the gendering of constipation as a feminine condition); 4) Offer an alternative theory of the significance of fecal matter to the dominant one provided by psychoanalysis (i.e. feces as gift, gold, a la Freud). The goal of the course is to begin to articulate and realize an original approach to literature that, rather than take feces as a site of disgust, takes it as a site of creation.

All I can say is this: the course is a damn travesty, larded with postmodernism. I pity the students who take it, and I pity the professor, who is not only going to have to deal with this for the rest of her professional life, but may be endangering her tenure. For surely even Harvard can’t think that this is worthy teaching or scholarship! 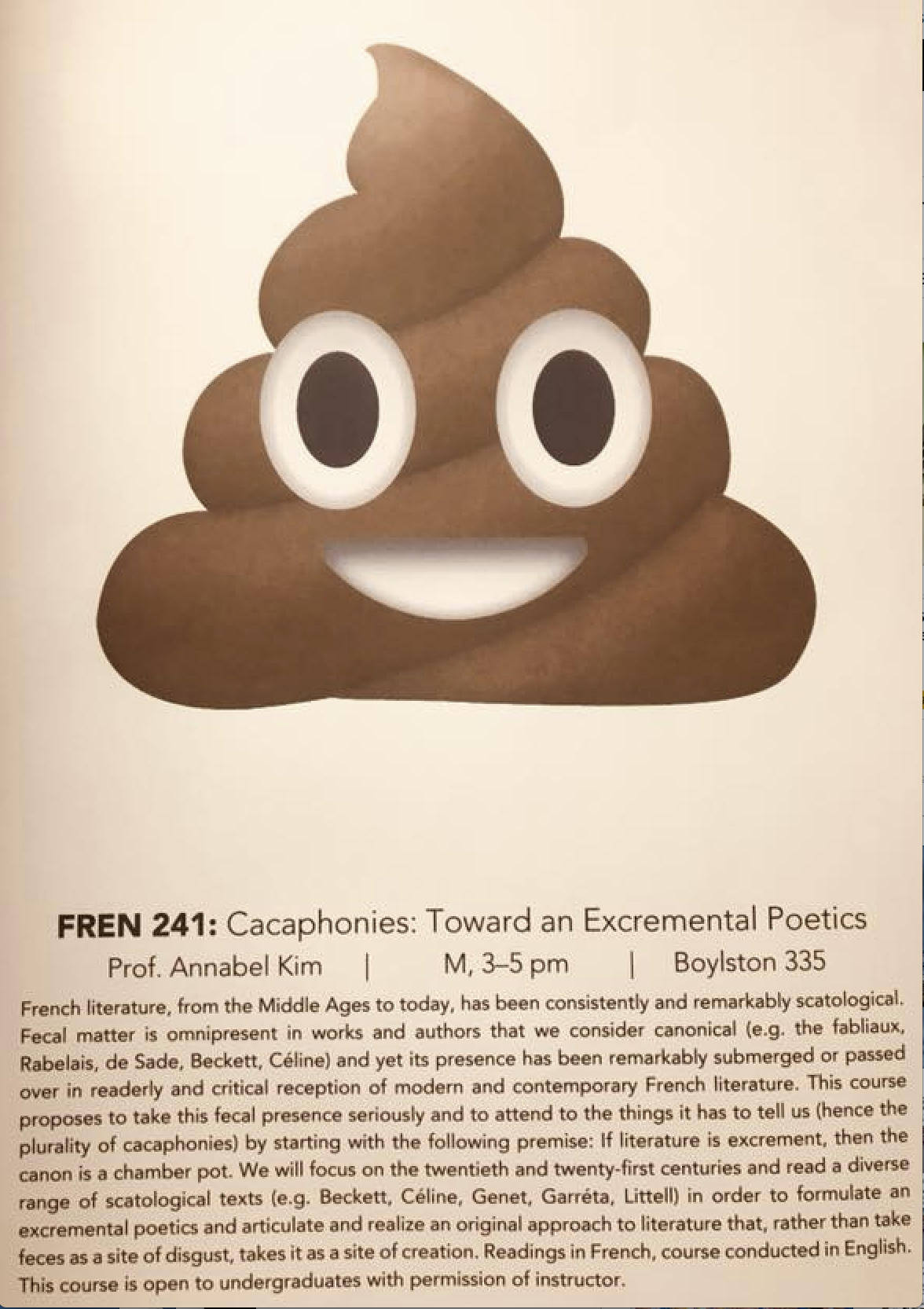 Now I’m not sure if Dr. Kim made this poster to advertise the course, or someone made it as a joke. But given that the whole course is an unwitting joke, it hardly matters.

91 thoughts on “Postmodern Poo: A Harvard course on scatalogical literature (“the canon is a chamber pot”)”