On June 24 I wrote about a piece in Medusa Magazine called “Beyond pro-choice: The solution to white supremacy is white abortion,” which called for white women to abort their babies as a way of diverting child-care resources to people of color. An excerpt:

I suspected that the piece, and the magazine itself, which certainly looked like a genuine Regressive site (motto: “Feminist Revolution Now”), might have been a hoax, for many of its articles were way over the top: more extreme than even Everyday Feminism, which is nearly a parody itself. And several diligent readers sussed out evidence of a hoax, looking up domain names, those who registered them, and other facts. When I concluded it was probably a hoax, but wasn’t sure, one irate reader chewed me out:

The fact that you fell for this obvious hoax reveals that you have been fighting windmills for a long fucking time. Nobody with even minimal knowledge of modern feminism could possibly have been fooled by this trash. You find the article indistinguishable from what far right misogynists have told you that feminists say. Maybe this will be a valuable lesson to be less gullible and better informed.

I responded saying, among other things, “You don’t have the slightest idea what you’re talking about; I’ve posted about real feminism articles (one recently on Everyday Feminism, others about feminist glaciology and the racism of Pilates) that are indistinguishable from these pieces.”

One writer contacted Medusa, asking them if they were a hoax, and the editor adamantly denied it (but of course they would!), saying:

Hello,
Medusa Magazine is a blog that espouses feminist ideology. We make no apologies for this, and we stand by everything we publish.
That being said, the views expressed in each article belong to the author(s) alone. We would however never have published any of the articles if we didn’t think they had any value to add to intellectual discourse. Even the articles that you describe as “over the top” have started a discussion and debate online about important issues that need to be discussed.
Say Hi to your readers from us.
Cheers.

Well, it turns out Medusa was indeed a well-crafted hoax, certainly fooling some of us who were used to over-the-top articles about racist pumpkin lattes, white-privilege Pilates, and similar things. It was too close to reality to know for from the content itself without the further digging done by our readers.

As reader Cindy pointed out, Medusa has now admitted its spoofiness in the article below (click on screenshot): 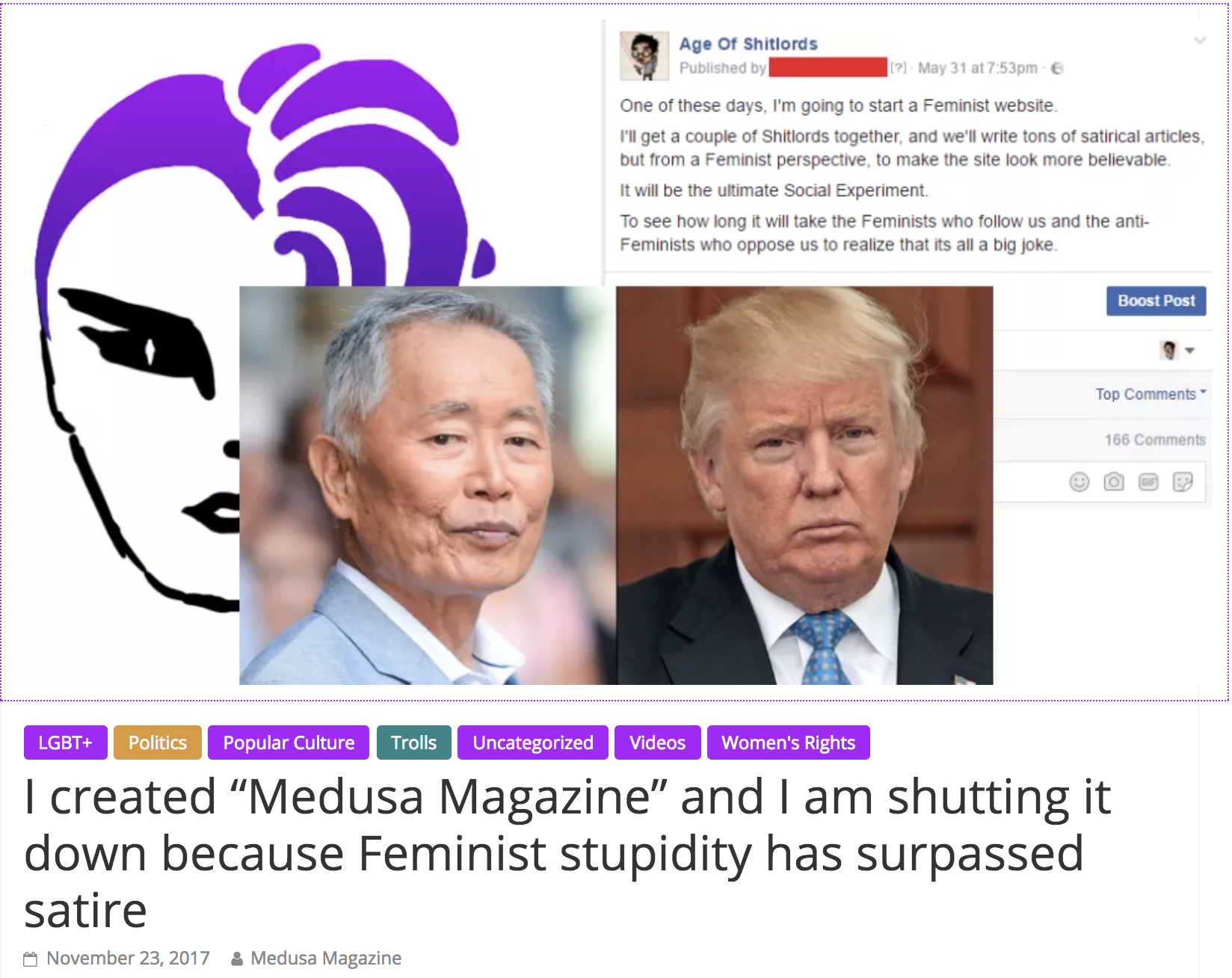 Before I go on, let me say that I don’t endorse the extreme denigration of feminism associated with “Age of Shitlords”; I think I’ve made my approbation of women’s struggles for equality clear many times on this site. The point of this piece, however, is how close the satire of extreme Third Wave feminism and Regressive Leftism can come to the real thing—something we suspected already from the articles I’ve highlighted in real journals as well as hoaxes like the Sokal Affair.

Why are they shutting down Medusa? Because they published a satire article that was almost indistinguishable from a real one published later— with both pieces about why sexual harassers and abusers on the Left should be given more of a pass than those on the Right. Their explanation:

But back to to the original topic, we are shutting down our rather hilarious project because we can no longer compete with our competition. We have come to realize that our competition is not other satirical websites, but rather the people we are trying to satirize. About a week ago, after a short hiatus from the website and in light of the recent sexual assault allegations currently afflicting Hollywood, we put out another article titled “Why we should believe women who accuse right wingers of rape more than those who accuse liberals”. The article is a total caricature intended to be as ridiculous as possible, basically arguing that because liberals are good people, we should forgive them when they rape women. We thought no one in the world could possibly hold views as ridiculous as that, so we wrote it as satire and published it.

So imagine our surprise when an actual Feminist and self-proclaimed expert on “rape culture” wrote an article for The Washington Post no less, using the same rational [sic] and reasoning as our satirical article that was written just a few days before.

Here’s the Medusa article, published on November 11 (click on screenshot): 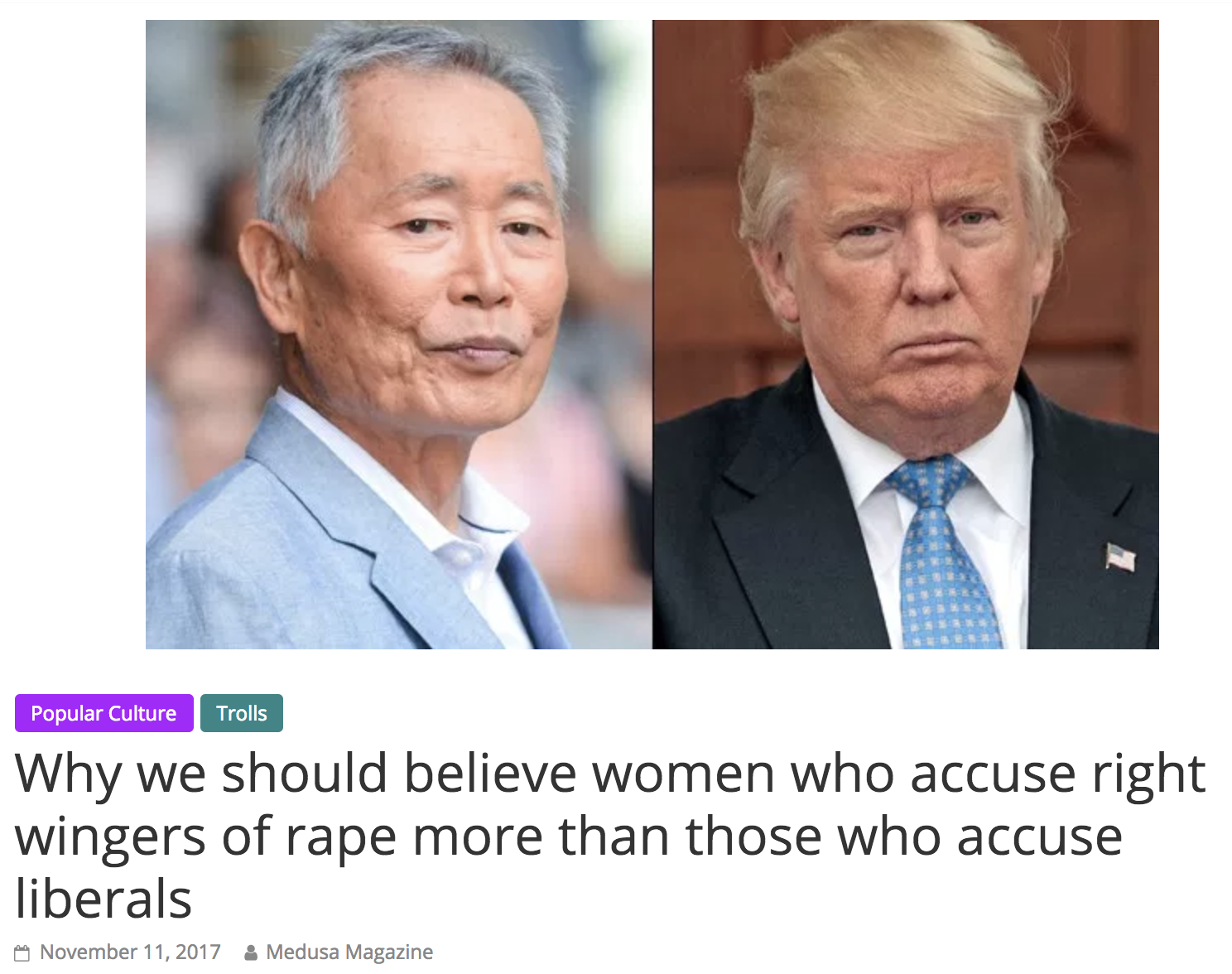 An excerpt from that Medusa piece:

Regardless of whether  any of these men are guilty of the crimes they have been accused of or not, one thing is for sure – the ones who hold left wing values have earned the right to make at least one mistake in their lives. George Takei has helped millions of LGBT children around the globe come out and be comfortable in their sexually. Harvey Weinstein has donated funds to many Democratic candidates and grass-root movements that have helped us secure political power. Who cares if these men have made one or two mistakes in their lives? What’s important is that they have realized their mistakes and are willing to learn from them, which is more than I can say for Trump and his fellow GOP rapists.

We should sympathize with the victims of these liberal men, but we should not devalue the work and legacies of their rapists. To focus too much on the accusations brings to light these men’s political ideologies, which wrecks [sic] havoc for us. It would be hypocritical of us to keep criticizing Trump and rape culture when so many men among us have been accused of sexual assault. If more liberal personalities get accused of sexual assault between now and 2020, Trump is going to win a second term. I don’t know about you, but I would rather live in a world where liberals hold political power and a few women get raped than one in which conservatives hold power and women still get raped.

And here’s the Post‘s article from November 17 (click on screenshot), written by Kate Harding, a feminist author and co-host of the podcast “Feminasty”

The Medusa hoaxer underlined bits of the Post piece that were similar to what appeared in Medusa: 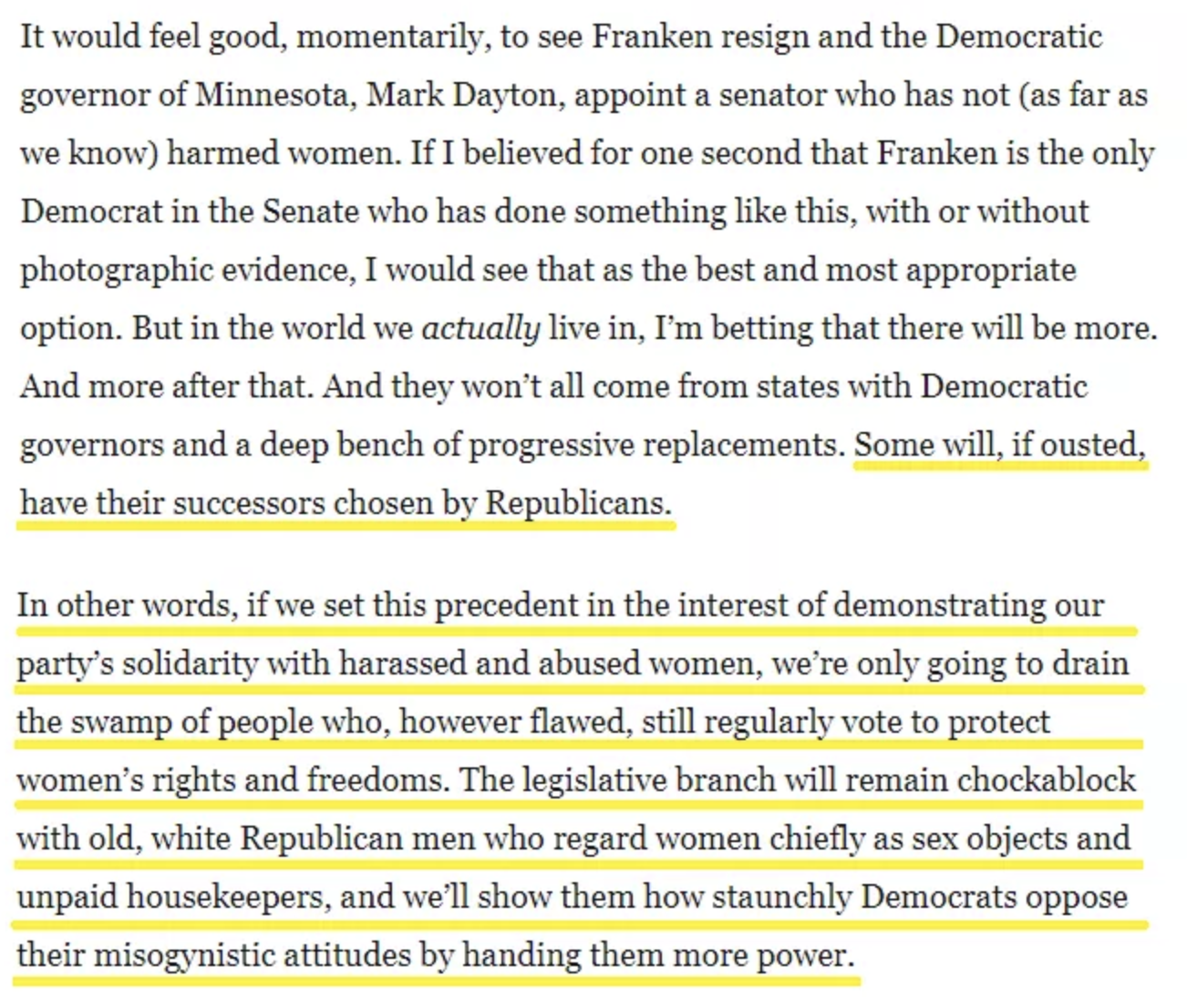 Huge difference? Not really. Now granted, the Medusa piece is a bit more hyperbolic and dramatic than the Post piece, and its headline is a bit misleading (it’s more about forgiving than believing), but the points were the same: we are supposed give more of a pass to Left-wing harassers and sexual predators than to those on the Right. Everyone’s calling for Roy Moore to step out of the race, but some, at least, are importuning Franken to stay in office. I’m reserving judgment since accusations against Franken are still appearing, and we can’t yet judge their severity or reality, but principles of justice say that people who do equally bad things should suffer equal punishment and opprobrium. If you call for one to resign, you should call for the other. Criminals in court don’t usually have their sentences conditioned on their politics.

I have to say that I’m far more saddened by Franken’s missteps than Moore’s, as Franken was a good Senator with progressive values, and surely he’d accomplish more good in the Senate than Moore ever would. (And, to be sure, Franken’s transgressions appear, right now, to be less severe.) But should we take politics into account when calling for punishment? If deterrence of others and reformation of the miscreant are part of the goals of punishment, why would the deterrence be less with a Left-wing harasser than one on the Right? And I find it hard to believe that Left-wing sexual predators like Harvey Weinstein are more “reformable” than those on the right.

But I digress. The point is that when blatant caricature becomes indistinguishable from political reality, and hoaxes come to look like the truth, something is off kilter.

71 thoughts on “Medusa Magazine shuts down, finds its satire of Regressive Leftism is now indistinguishable from reality”