You’ve probably heard about “zombie ants”: ants that become zombie-like when infected by a certain parasitic fungus. Like many parasites, some fungi can control the behavior of their hosts, and they do this to increase their own fitness, affecting the host’s morphology and behavior to make it more likely that the parasite will pass its genes to the next generation. This is simple natural selection operating on the parasite, but doing so in a way that captivates and fascinates both biologists and laypeople. How can a fungus or worm take over a larger animal and make it do its “will”? (I’m speaking in biological shorthand here.)

One of the iconic examples of such parasitism involves those zombie ants. When a carpenter ant is infected by the parasitic fungus Ophiocoryceps unilateralis (henceforth, “the parasite”), the ant’s behavior eventually changes. The parasite enters the ant through the cuticle, and then begins to grow. After 16-25 days, the fungus makes the ant climb a plant (they nest in the ground), move to a conspicuous location on a plant, and then bite down hard on a plant vein, affixing itself firmly to the vegetation. The ant dies, and the fungus grows a stalk out of the ant, ready to disperse its spores to the ground, where the infection and life cycle will resume when the fungus is encountered by the next unlucky ant.

Here’s what the dead ants with the parasite growing out of them look like:

Clearly, the fungus is somehow manipulating the ant’s behavior to facilitate reproduction of the parasite. But how does it do this?

We don’t know exactly in any case (though there are a fair number of cases), but it must involve either growth of the parasite inside the host or chemical manipulation of a host(or both)—presumably in ways that affect the host’s brain. After all, if the brain isn’t affected, how can you modify the host’s behavior?

We now have a better, but still incomplete, idea of what’s going on with zombie ants from work described in a new paper in PNAS by Maridel Fredericksen et al.  (reference at bottom and free access; pdf here). What the authors did was infect carpenter ants (Camponotus castaneus) in the laboratory with the “zombie-making” O. unilateralis fungus (as well as with a control fungus that doesn’t create zombie ants but does kill them). Then right when at the crucial moment when ant bites down on the plant, they microdissect that infected ant to see where the fungus was.

This latter procedure was a tour de force, for it involved a complex series of manipulations on a very tiny creature. The ant was dissected tiny bit by tiny bit, and then each bit was treated with immunofluorescent stain that could distinguish between fungus tissue and ant tissue. The authors then developed a computer program to look at the microscopic sections and put them together. This procedure, called “deep learning”, is a huge improvement over it being done by hand—the usual technique. As Gizmodo notes:

Using electron microscopes, the researchers created 3D visualizations to determine location, abundance, and activity of the fungi inside the bodies of the ants. Slices of tissue were taken at a resolution of 50 nanometers, which were captured using a machine that could repeat the slicing and imaging process at a rate of 2,000 times over a 24-hour period. To parse this hideous amount of data, the researchers turned to artificial intelligence, whereby a machine-learning algorithm was taught to differentiate between fungal and ant cells. This allowed the researchers to determine how much of the insect was still ant, and how much of it was converted into the externalized fungus.

What they found was surprising:

1.) First, there was no fungus in the ant’s brain, though it was present throughout the body. This really was a surprise, as everyone expected that the fungus would glom onto the ant’s brain, and that was the way it controlled its behavior. Instead, there was fungus everywhere else in the ant, especially in the muscles. (That was true of the “control” fungus, too, but, surprisingly, the paper gives no information about whether the control fungus was found in the ant’s brain).

Here’s part of a figure showing the ant’s brain (stained in green), and the nearby fungus (red); scale bar is 20 microns. There are a few fungal tracheae in the brain (arrowheads) but nowhere near the degree of intermixing of brain and fungus cells seen in muscles, and there are no fungal hyphae (the filaments of the fungus that conduct and transfer nutrients) in the brain at all, whereas they’re deep into the muscle (see below). 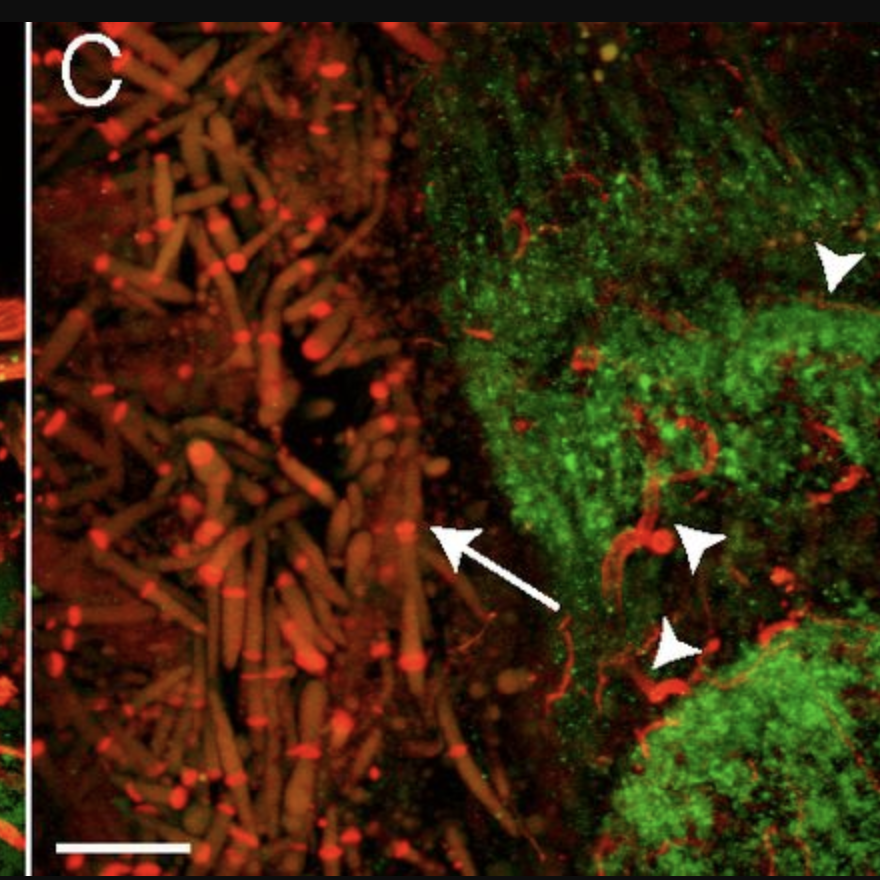 2.) The fungus formed a connecting network of hyphae that attached to and penetrated the ant’s muscles. Here’s an example of the networks of fungi (yellow) surrounding the ant’s muscles (red) from the paper:

What is the fungus doing infiltrating the muscle and forming a network that ramifies widely throughout the ant’s body? The authors posit, and this seems likely, that the fungal hyphae are sucking nutrients from the ant’s muscles and transferring them to other fungal cells not touching the muscles. This may be how the fungus feeds itself and grows throughout the ant. Muscles are rich in mitochondria, which give the ant energy reserves and are good food for the fungus. The authors also observed severe atrophy of the muscle probably connected with the fungal invasion. This muscle infiltration and formation of networks was not seen in the control fungus.

So we have two questions left:

Why does the fungus not infiltrate the brain?  We don’t know, but it’s possible that doing that would quickly kill the ant and render it useless for further growth and manipulation of behavior. Further (or in addition), it may be easier to control the ant’s behavior by secreting chemicals into an intact brain than by brute-force physical invasion of the brain. After all, the behavioral manipulation by the fungus is precise: it makes the ant go to a specific exposed position on the plant (see below) and then bite down hard with its mandibles.

So how is the fungus affecting the ant’s behavior? We still don’t know. Clearly the fungal attachment to the muscles is not somehow moving the muscles in a preferred way or controlling the mandibles; rather, the muscle infiltration is a way for the fungus to get the energy it needs to grow and then form the stalk that spreads spores. What is very likely, but remains to be shown, is that the fungus secretes a chemical that somehow affects the intact brain in a way that makes the ant behave like a zombie. The authors do note that metabolite chemicals secreted by the fungus differ when it is near the brain than when it is near the muscle. Not only that, but the behavioral modification is more than just biting: the ant goes to a very specific place before biting, and that directionality somehow has to be produced by the parasite as well. As Wikipedia notes,

An infected ant exhibits irregularly timed full body convulsions that dislodge it to the forest floor. The ant climbs up the stem of a plant and uses its mandibles with abnormal force to secure itself to a leaf vein, leaving dumbbell-shaped marks on it. The ants generally clamp to a leaf’s vein at a mean height of 25.20 ± 2.46 cm above the forest floor, on the northern side of the plant, in an environment with 94–95% humidity and temperatures between 20 and 30 °C (68 and 86 °F). Infections may lead to 20 to 30 dead ants per square meter. “Each time, they are on leaves that are a particular height off the ground and they have bitten into the main vein [of a leaf] before dying.” When the dead ants are moved to other places and positions, further vegetative growth and sporulation either fails to occur or results in undersized and abnormal reproductive structures.]

In other words, the fungus has to direct the dying ant to a specific microenvironment optimal for survival and propagation of the spores.

This adds up to a real tour de force of natural selection: imagine the evolution of a chemical that can make the ant behave in such specific ways! The mind boggles: what were the intermediate steps in the evolution of this kind of host manipulation?

As Matthew emailed me (he found the paper), “What an amazing adaptation of the fungus to make the ant do the things the fungus needs it to do (‘puppet master’ is wrong metaphor because the fungus isn’t the master—natural selection is!)”.  It’s stuff like this that keeps the evolutionary biologist—well, at least the ones with imagination—in a constant state of wonder and awe.

Now of course we don’t know the crucial answer: how does the manipulation of behavior actually work. But we know at least that it’s probably chemical rather than physical, and we also know that the parasitic fungus evolved adaptations for sucking nutrients from the ant’s muscles. That’s two steps forward. And the usual ending of scientific papers applies: “More work needs to be done.”