Several readers called my attention to a new short article in Scientific American, “The U.S. is retreating from religion“, which highlights a recent study by the General Social Survey (GSS) conducted by NORC (the National Opinion Research Center of the University of Chicago.  The upshot is something I’ve written about a lot: the U.S. is slowly becoming more secular. Our country, I suspect, will be as atheistic as Denmark or Sweden in about 150 years. (Sadly, we won’t be around to see that.)

The GSS has been conducted since 1972 (see methodology and data here), and among its inquiries is the religious affiliation of Americans. The first graph below shows the changes from 1972 to 2016 (solid lines), and projections to 2035 (further shaded areas). The projections are apparently based on “a statistical model of the relationship between year of birth, age, and religion.”

While the GSS asked people about the four religious affiliations below, plus whether they were Jewish, only the first four are shown (Jews are only a few percent of Americans.) But the trend is absolutely clear: Protestantism is falling rapidly, Catholicism much more slowly, “other religions” are holding steady and low at about 5-7%, and the “nones”—those with no clear religious affiliation, though they may believe in a god, or be “spiritual” or atheists—have been rising rapidly and predicted to rise even faster.

As the article notes:

Since 1990, the fraction of Americans with no religious affiliation has nearly tripled, from about 8 percent to 22 percent. Over the next 20 years, this trend will accelerate: by 2020, there will be more of these “Nones” than Catholics, and by 2035, they will outnumber Protestants.

This projection doesn’t account, I suspect, for immigration, which may change these projections because (especially under Trump) since it’s unpredictable and the projections appear to be based solely on age data. Nevertheless, some of us will be around to see the day that “nones” comprise the most common species of “believers” (and nonbelievers) in America: 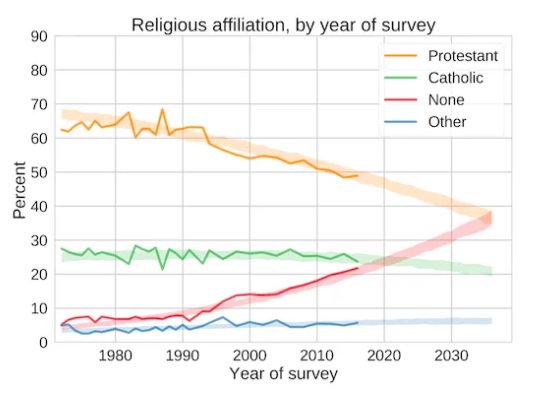 The data on which some of the projections were made are given below: how age is correlated with religious affiliation. The trends are similar, with Protestantism losing big time and “nones” much more prevalent among younger than among older people, although Catholicism is a wee bit more frequent among younger than older people.  It could be that more young people are converting to Catholicism than to other forms of belief. As the article notes:

However, this view of the data does not show the effect of age. If religious affiliation increases or decreases, on average, as people get older, this figure could be misleading. 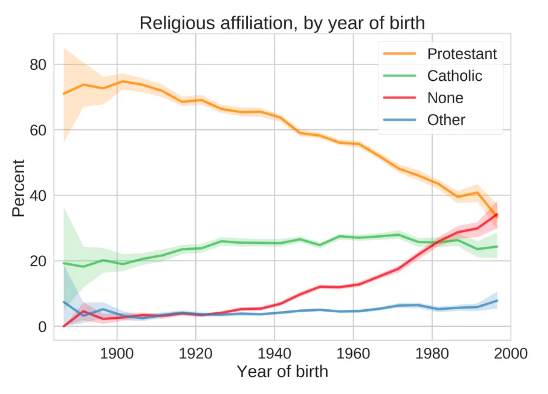 Allen Downey, the article’s author, in fact sees these predictions as conservative in the direction of overestimating religiosity and underestimating the “nones”: you can read the reasons why in his piece.

Why is this happening? I suspect that it’s because the social well-being of America is increasing over time, and there’s plenty of evidence that increased well being—measured by a variety of statistics like healthcare, income inequality, incarceration rates and so on—is associated with lower religiosity both among countries and among states in the U.S. But of course if this is the reason, some unpredictable cataclysm, like nuclear war with North Korea, could upset these trends.

Absent that, we can still say with confidence that those who proclaim that “religion in America is stronger than ever” are simply full of it.

Downey, a Professor of Computer Science at Olin College in Needham, Massachusetts, provides more data here, and has a longer version of this piece on his website, Probably Overthinking It. He notes “It applies the same methods to predict changes in other aspects of religion: belief in God, interpretation of the Bible, and confidence in the people who run religious organizations.”

93 thoughts on “Losing our religion: the U.S. slowly goes secular”