A few days ago I wrote a piece about the Title IX mess: the confusion and lawsuits that resulted when the Office of Civil Rights (OCR) wrote to colleges “asking” them to adjudicate accusations of sexual assault or harassment according to the lowest possible standard: “preponderance of the evidence”—the accused more likely than not to have done it. (That is, probability of guilt greater than 50%.) While the letter was touted as advisory, nearly every college adopted those standards (though some, like Harvard, beefed), for fear that they’d lose federal money or be inspected by the OCR.

This is way below the standards by which these crimes would be adjudicated in the courts, who rely on a “beyond reasonable doubt” criterion. Since then, Education Secretary Betsy DeVos has scrapped the “Dear Colleague” letter of the Obama years, giving several months for people to weigh in before new standards of justice, which she sees as having more “fairness”, will be promulgated. Those will presumably raise the bar of guilt for those accused in college.

I doubt DeVos will force colleges to adopt higher standards of evidence, but she might, using threats of withholding federal monies or of inspection by the OCR if they don’t give the accused more rights. But something needs to be fixed: a point that Emily Yoffe made eloquently in her three-part series on the Title IX mess in The Atlantic (links here).

Most of us pretty much despise the Trump Administration, as do I, but we can’t simply reject everything they do simply because it devolves to Trump. That’s the same kind of mistake Republicans made when rejecting anything that was suggested by Obama. In this case, I do think those accused of sexual assault in college need more rights and a clearer system of how accusations are dealt with and punished. Or maybe colleges shouldn’t be in this business at all, but should hand over such accusations, which involve criminal behavior, to the courts—for that system is set up to adjudicate crimes like these.

I asked readers to choose between the following alternatives: 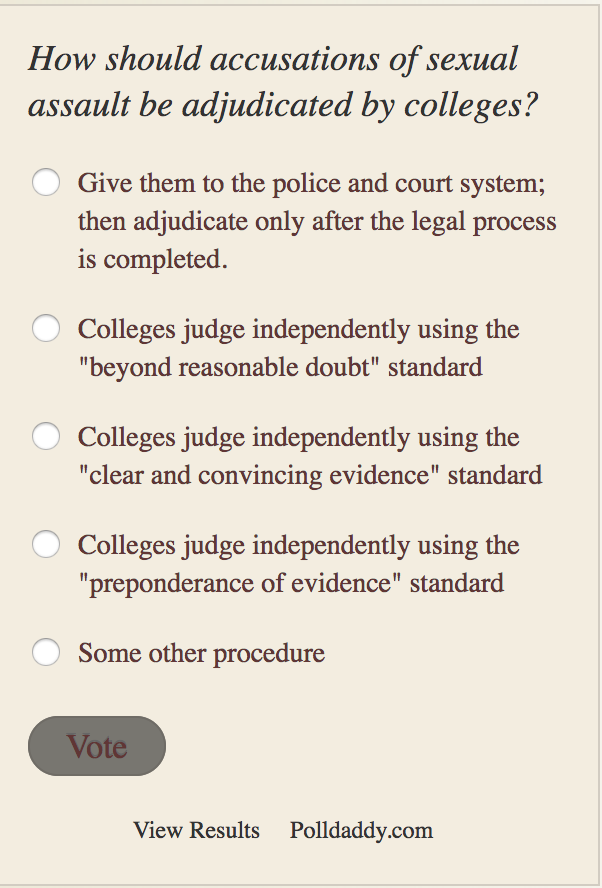 And here’s the outcome as of this morning:

While I was disappointed that only 355 people voted (after all, we have over 50,600 subscribers, and you can go back and vote here), the overwhelming response was “take it to the courts”. And when colleges do adjudicate the issues, most people voted for using the toughest standard, equivalent to “beyond reasonable doubt.” I’m coming around to the view that colleges have no right to punish students for sexual assault unless those students have been found guilty by the courts. But colleges do have a right to impose sanctions beyond those leveled by courts, like expelling a student found guilty. I don’t think a student should be suspended before they go to trial unless the bail conditions prohibit entry to campus.

Several readers brought up one issue though: what do we do with students (let’s assume they’re men) who are found sufficiently suspicious by the police to have their cases go to court? Do we want them roaming around on campus?

To me that’s a no-brainer. If the courts have deemed them sufficiently unlikely to flee or re-offend so that they get bail, then of course they should go back to campus. For if the courts deem them able to be free in society, why shouldn’t they be free to go back to campus? Of course they’d be demonized, and probably wouldn’t want to return to campus, but bail is bail, and if there are conditions, like not leaving your house, those could also apply to campus rules.  I wonder, though, whether “bail on condition student doesn’t return to campus” is a legal thing to do.

And, if a student isn’t found guilty, should the college, using lower standards of evidence, still sanction him? I don’t think so, for I don’t think colleges should even use those lower standards of evidence. The reason they do is, of course, because parents rightfully don’t want to send their students to a college that looks soft on sexual assault. But sexual assault is a crime, and I can think of nothing more reassuring to a parent of either a male or female student than a college saying, “All cases of sexual assault, being crimes, will be immediately reported to the police, and any college action will follow the outcome of the judiciary process.”

Weigh in below, and don’t forget to vote!

48 thoughts on “Results of our Title IX poll: take accusations of sexual assault to the courts”