We have a passel of photos, scanned from slides, from reader Tom Gula; his notes are indented:

I’ve attached some more wildlife shots of scanned slides. Most are again from Brazil, but I included some U.S. animals this time, mostly from my home state of New Jersey. Once again perhaps some of your knowledgeable readers will provide more information about species identification.
One of the photos posted on June 16 was a spiny caterpillar I found in a remnant of Atlantic coastal rain forest in Pernambuco, Brazil back in 1978. A reader identified it as the larva of an Io moth, genus Automeris. This is an adult Io moth seen in the same location. The spines of the caterpillars are known to cause painful stings, as documented in this video (not mine) taken in Costa Rica. 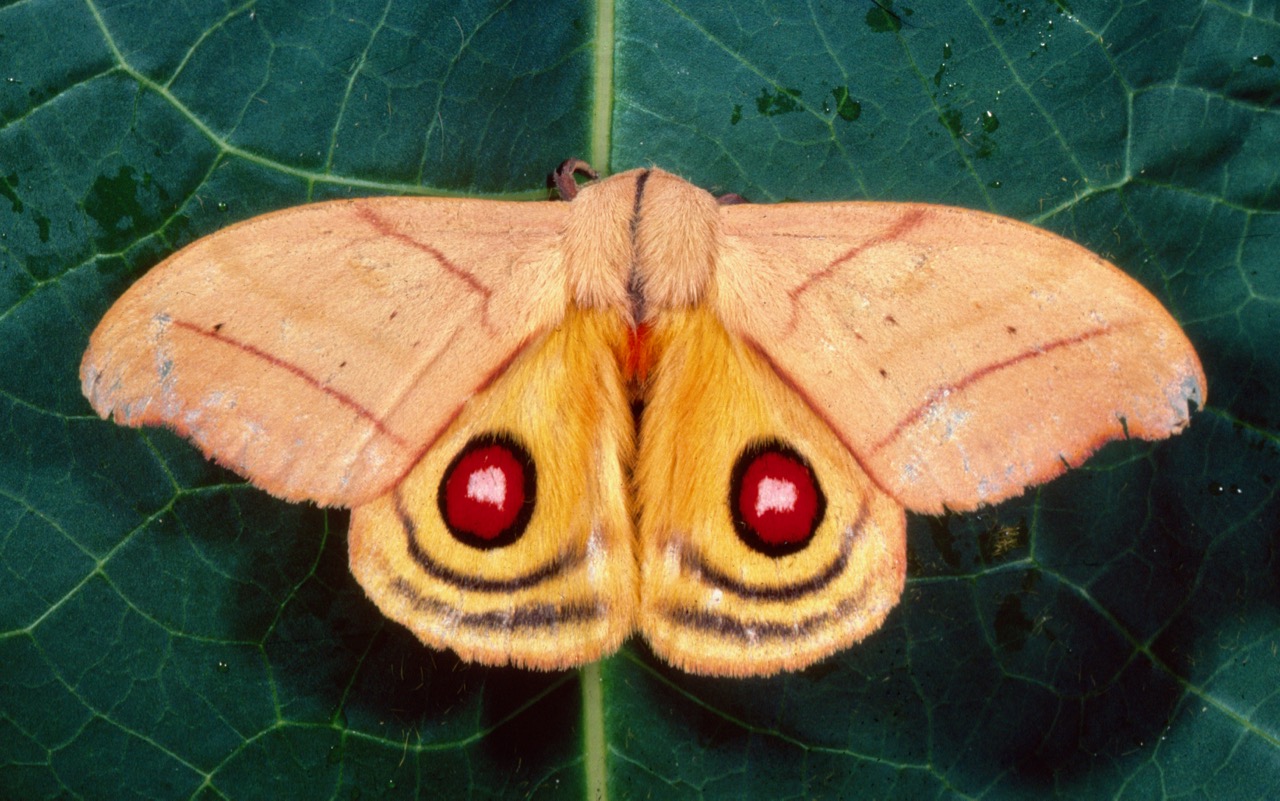 An unidentified species of praying mantis, a dead leaf mimic probably in the genusAcanthops. The photo was also taken in Pernambuco, Brazil (the Tapacurá Ecological Station), in 1977. 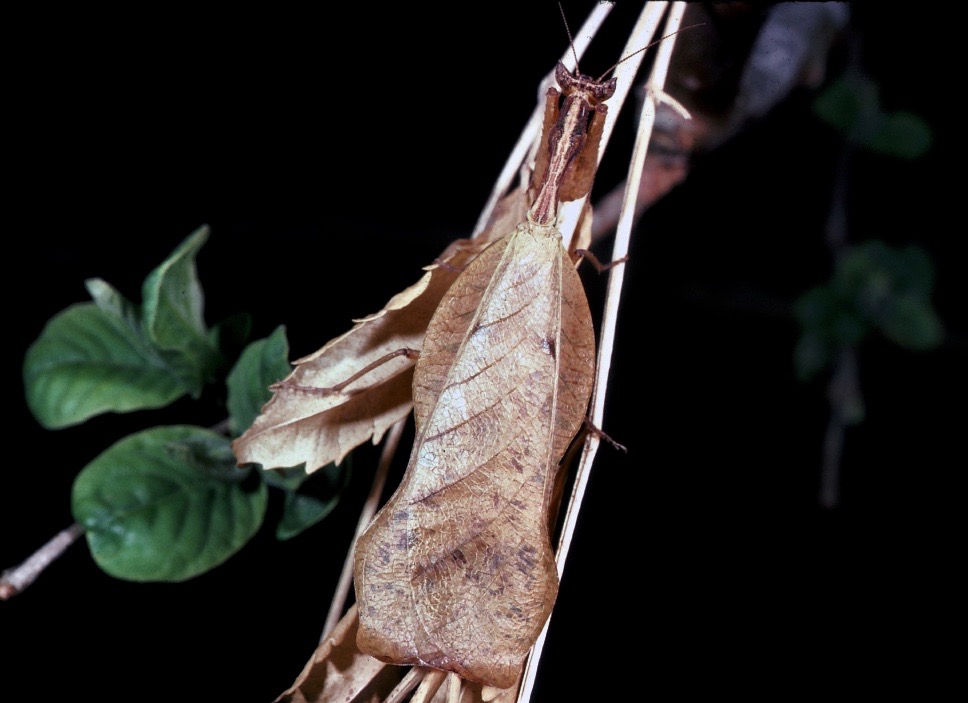 Another insect captured in the Pernambuco forest in 1978, the head of a Neotropical stick grasshopper (also known as a jumping stick) in the family Proscopiidae. 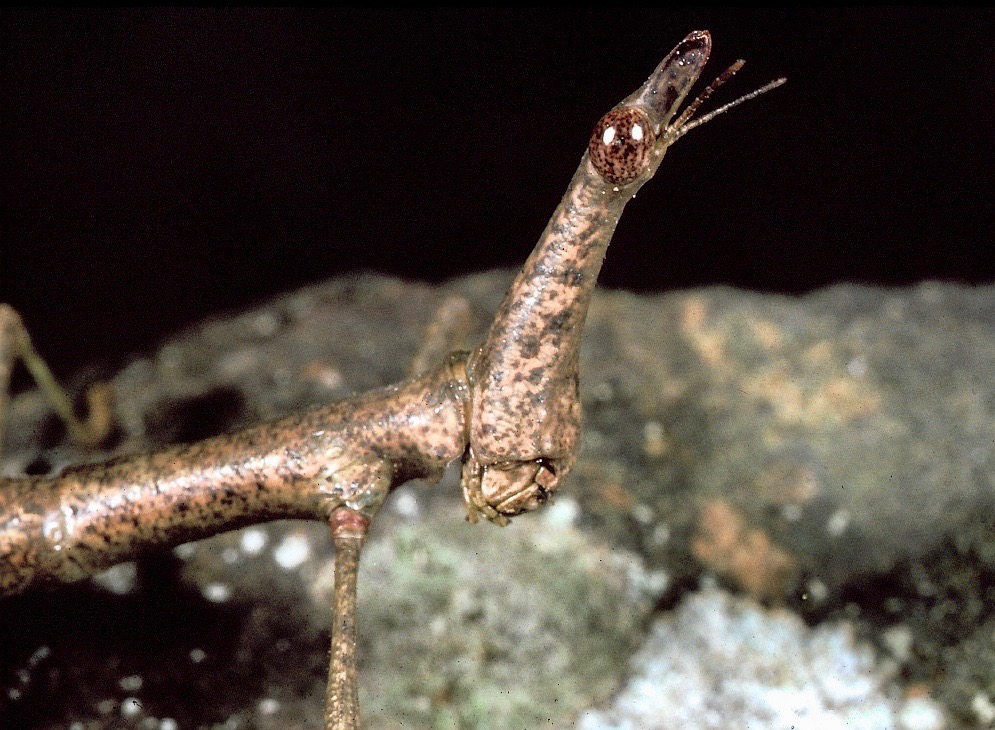 A caterpillar with a false eyespot I found at the Tapacurá Ecological Station in 1978, not sure of the species. The larva of a swallowtail butterfly? 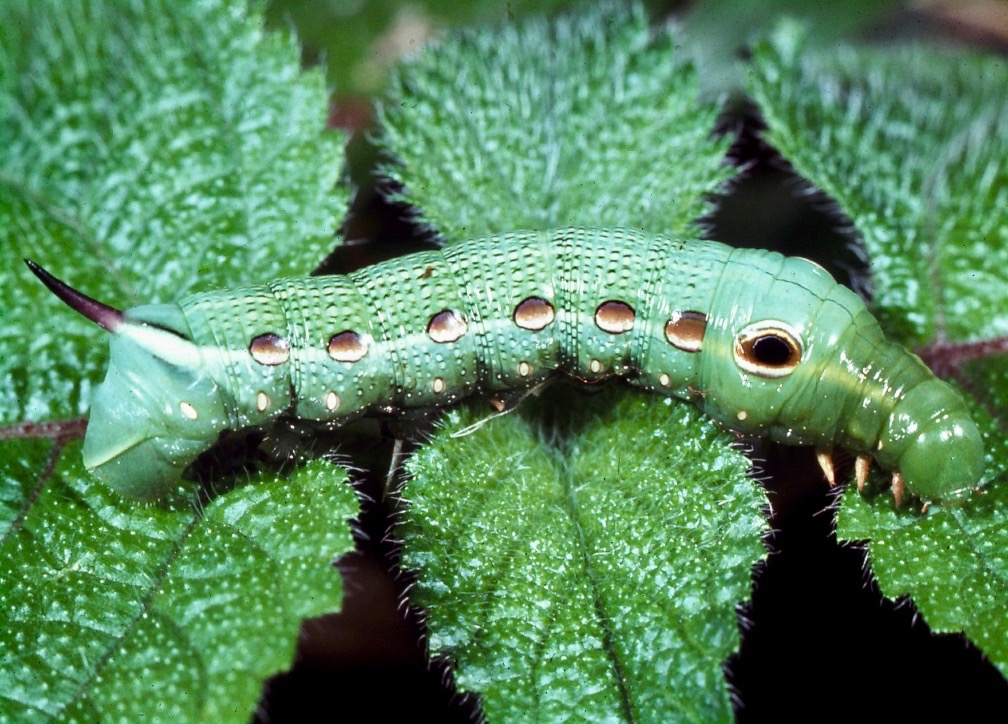 An unidentified clear-winged moth, also from Pernambuco, photographed in 1979. 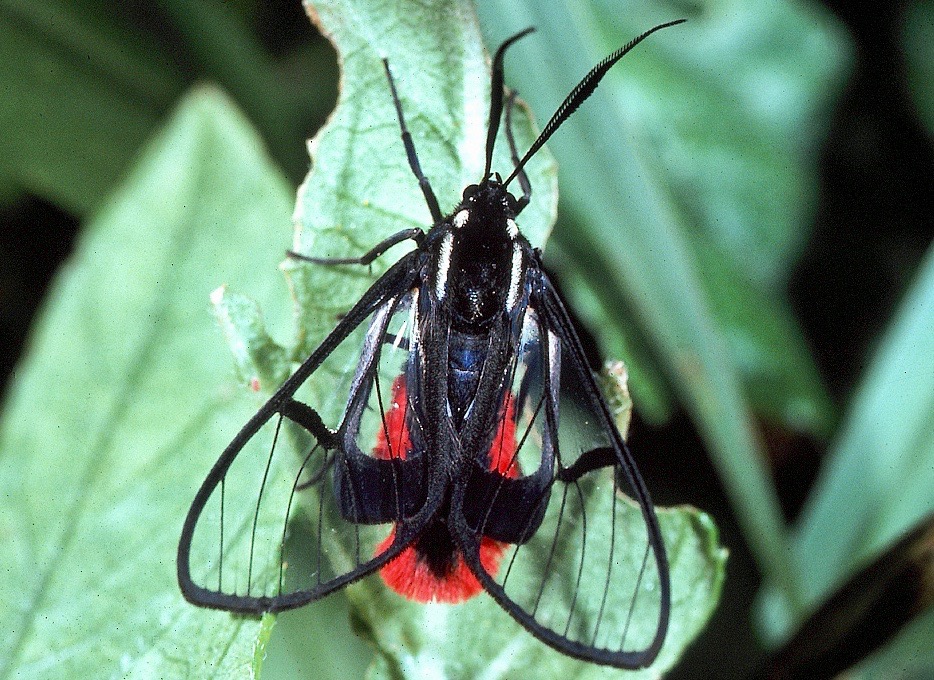 While walking down a dirt road near the Iguazu Falls (on the Argentina side) in 1980 I came upon the decaying corpse of an unlucky dead rabbit. There are at least a half dozen species of butterflies feeding on the nutrients, particularly salts, sugars, and proteins, in the decomposing body. At least three of the butterflies are the “88 butterfly” in the genus Diaethria, with a black and white striped wing pattern that resembles the number 88. 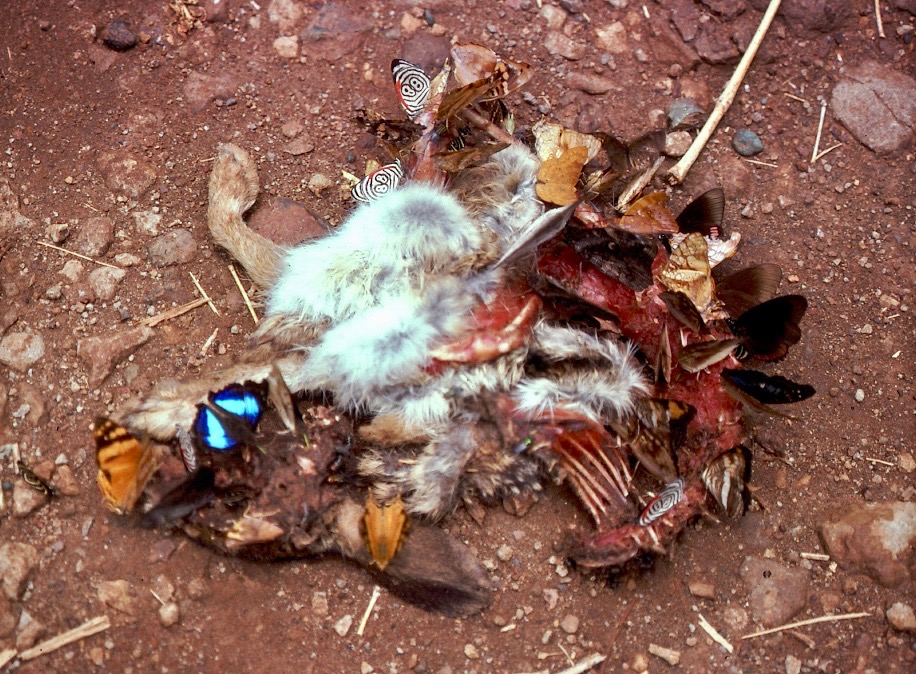 The last four photos were taken in the U.S. Here’s an unidentified species of cryptic caterpillar I noticed on the bark of a tree in the Great Smoky Mountains National Park, 1977. 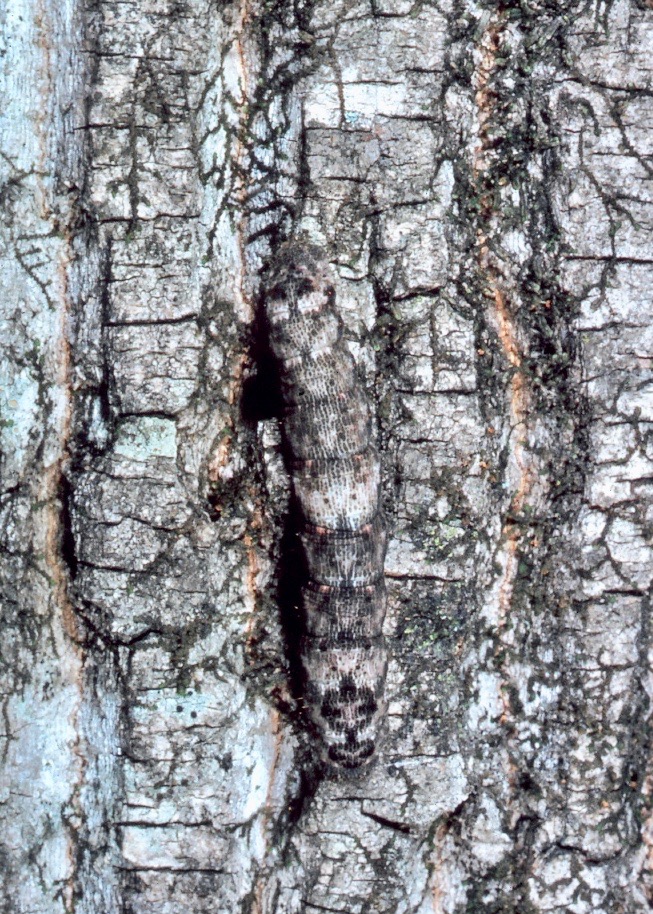 While walking through New Jersey’s Great Swamp National Wildlife Refuge in 1977 I noticed some movement on a thistle plant, and saw this large Chinese Mantis (Tenodera sinensis) feeding on a captured bumblebee. 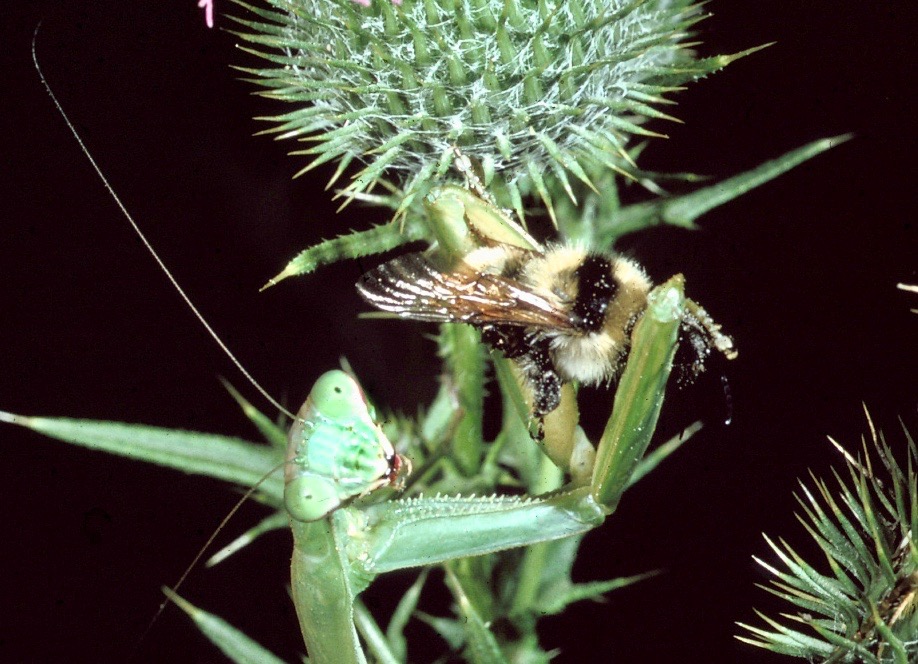 Also from the New Jersey Great Swamp in 1977, another predator, an unidentified crab spider, waiting for some unsuspecting flying insect to land on these Queen Anne’s lace flowers. 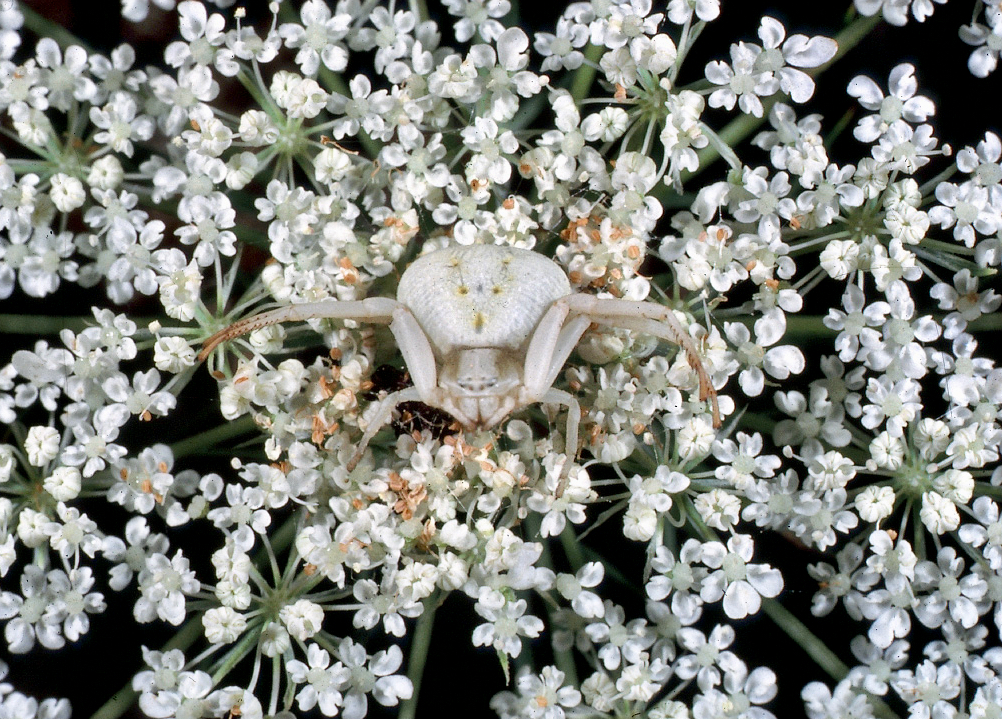 And finally, I photographed this near threatened Pine Barrens tree frog (Hyla andersonii) in 1987 in the New Jersey Pine Barrens. Although locally common in some parts of the N.J. pinelands, its populations are threatened by continuing habitat loss. The species has an interesting disjunct distribution (see the map below, from Wikipedia), found only in southern New Jersey, parts of North and South Carolina, and parts of Alabama and the Florida panhandle. 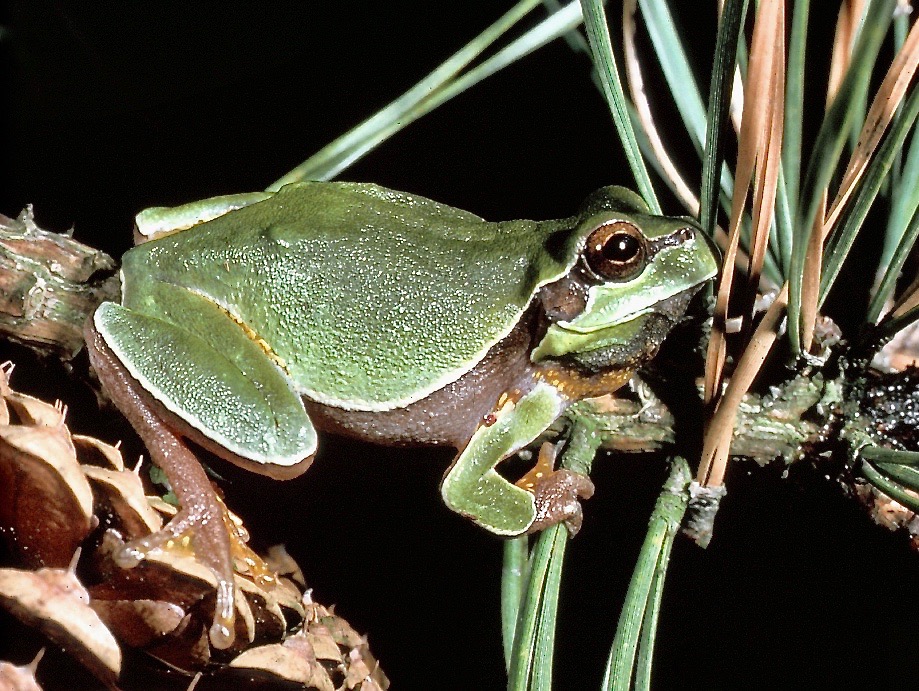 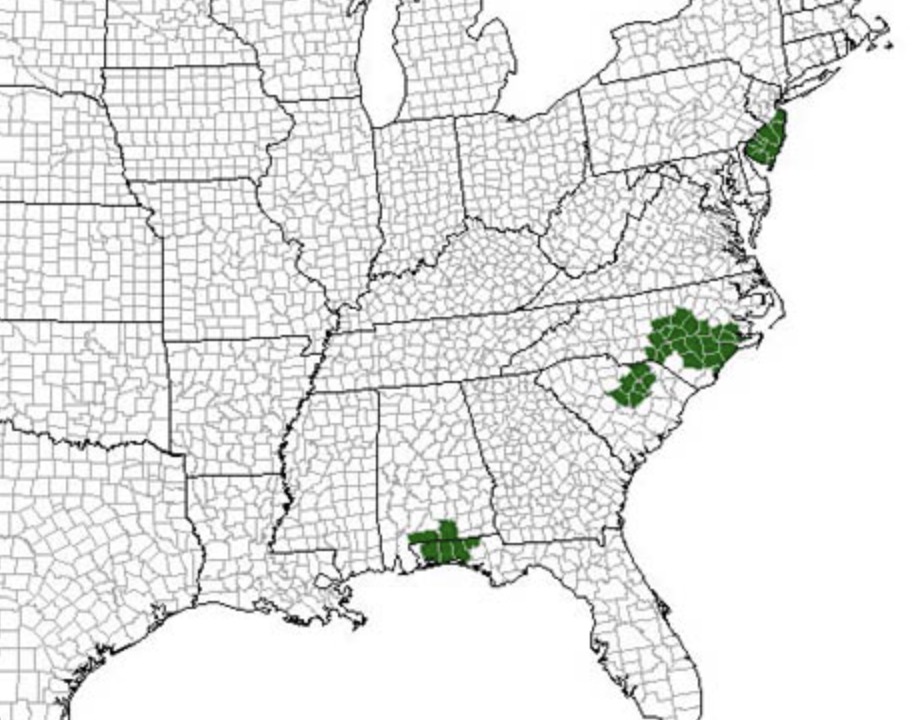