There’s a new book out called The Mind of God: Neuroscience, Faith, and a Search for the Soul. It’s by a neuroscientist: Jay Lombard, who appears to have started out respectably but now is going the Chopra route (i.e., off the rails), as you’ll see below. In fact, the book has been endorsed by Deepakity himself:

“The Mind of God is inspiring, insightful and thought provoking. This book will awaken new connections in our understanding of the exhilarating relationship between reality, reason, and faith.”
–Deepak Chopra, MD, and New York Times Bestseller of How to Know God

The book is doing pretty well, too: it was touted at HuffPo  and yesterday was #189 among all books on Amazon US. It’s #1 in Amazon’s “Science and Religion” section, just ahead of neurosurgeon Eben Alexander’s bogus book Proof of Heaven, which has sold very well despite being partly questionable and partly fraudulent.  All you have to do to make a million bucks these days is write a book showing that science itself proves God, and that’s apparently what Lombard has done. I must say, the prospect is tempting: though I don’t need the bucks, I’d love to hoax the credulous, God-loving public. But now I can’t, for I’ve said it.

At any rate, you can read how Lombard touts his book by clicking on the screenshot below of his New York Times interview’. (Lombard’s photo looks like a hybrid between Steven Pinker and Harrison Ford):

Lombard appears to be a frank dualist, someone who thinks that the mind transcends the material. Although he’s a bit cagey about God in the interview, his statements are still bizarre. Here are a few:

This one espouses a God-of-the-Synaptic-Gap view, in which Lombard’s failure to fully understand the physical basis of mental illness pushes him toward the metaphysical:

Trying to find the biological origins of psychiatric disease is much more difficult than for a stroke, hypertension or A.L.S. But it’s there. And you see that no matter how reduced you get, you’re left with sand going through your hands. That took me to a completely opposite place, which was to ask questions about purpose and meaning; about suffering, and about how patients themselves make sense of their suffering; and about how I make sense of it as a clinician.

Of course “making sense” of something doesn’t mean you’ve said anything true.

This Q&A baffles me:

What’s the most surprising thing you learned while writing it?

How much we are dependent on our own brains for whatever form of faith we experience in our lives. How reliant we are on the physical aspects of our spiritual being.

That’s a classic Deepity: it’s trivial (of course our beliefs depend on our brain, as does any spirituality we espouse), but sounds Deep and Meaningful.

Here’s his most egregious statement, which is basically a falsehood. It’s the second part of his answer to the question just above:

What I learned personally is that neuroscience is totally wrong. Neuroscientists don’t believe that such a thing as the mind exists. They flat-out reject the concept of mind. I find that a very scary, slippery slope. I think psychiatry has lost its mind, both literally and metaphorically. A lot of the book is about that part of our brain that connects us to our deeper, spiritual underpinnings. It’s not our rational brain; it’s our narrative brain.

Where is there a neuroscientist who says that the mind doesn’t exist as a reification of physical processes? It’s not a glob of stuff that resides in one place in the brain, nor a non-physical thing that’s detachable from the brain, but saying that mind doesn’t exist as an abstraction (even though it’s not what most people think it is) is like saying that “you” don’t exist. But I believe Lombard is a dualist, as evidenced by the stuff below and by the final bit of his interview:

Persuade someone to read “The Mind of God” in less than 50 words.

I believe we are living in a time of huge existential crisis in our society. I want people to ask themselves, first and foremost, if they have a sense of purpose. If they say yes, but they don’t know what it is, they should read the book.

Ten to one that “purpose” says something about God, and if I’m wrong I’ll eat three freeze-dried mealworms. But wait–there’s more! Here are a few screenshots from the book itself, which you can preview on The Mind of God‘s Amazon page:

p. 12, an espousal of Intelligent Design and a claim of a creator God: 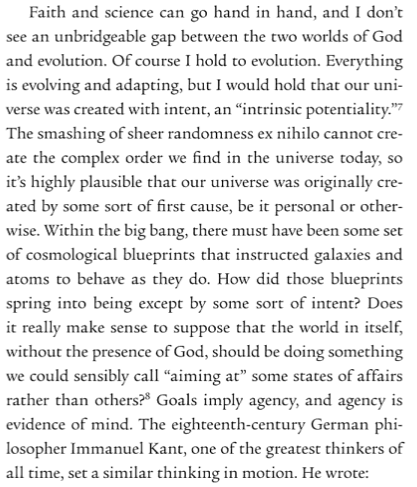 p. 40: Some misunderstanding of evolution and a claim that human compassion comes from the “feeling of God”. I’d be curious to see if Lombard takes the position that there really is a God, which is implied above, or claims that the mere idea of God is sufficient to motivate us, regardless of whether it’s true: 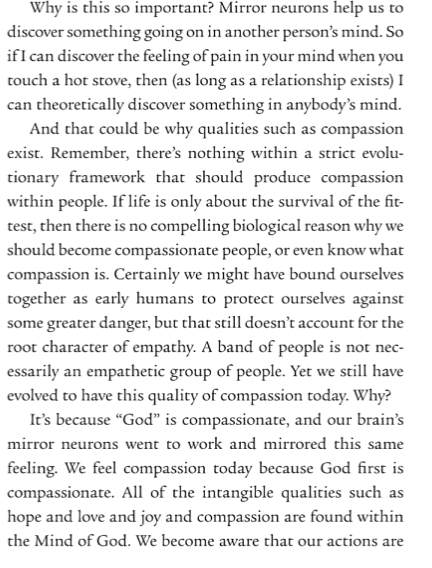 I’m a bit distressed but not surprised that the NYT ran this palaver. It’s woo: a scientific rationale for God (Templeton must love it). But the NYT really needs to look at this crap more closely. It didn’t even review Lawrence Krauss’s new book The Greatest Story Ever Told—So Far, which is a true history of modern physics, but the paper gave publicity to the kind of woo described above. Oh, the humanity!