I’m sure you’ve heard the story: American college student Otto Warmbier,  then 21, was taking a five-day tour of North Korea at the end of 2015, and apparently removed a propaganda poster from the wall of his Pyongyang hotel as a souvenir. (There’s a video, but he’s not identifiable.) When leaving the country, Warmbier was arrested for “hostile acts against the state”, imprisoned, supposedly confessed (remember, this is the DPRK), and in March was sentenced to 15 years of hard labor.

After the U.S. interceded, Warmbier was released five days ago, but government officials learned only a week before Warmbier’s release that he was in a coma, which the North Koreans attributed to his getting botulism and then having taken a sleeping pill. He was flown home on a stretcher, where doctors determined that, contrary to the North Korean statement, he had extensive brain injuries. He is now in a “persistent vegetative state” with extensive loss of brain tissue, and the prognosis is not good. Most likely he will either die or remain comatose for a very long time. It’s not clear what happened, but the North Korean story is certainly bogus as there were no signs of botulism.

This is a sad tale, but of course it comports with the dreadful ways North Korea treats its own prisoners, often incarcerated for petty crimes—or no crimes at all. (Family members are taken to the camps along with the “convicted.”) How horrible—but how typical—that a self-styled Social Justice Warrior writing on HuffPo uses his sentence to gloat over how “white privilege” isn’t respected in North Korea. (To be fair, the author,  La Sha, who is black, updated the story in late March, before Warmbier’s medical condition was known.) But even ignorance of that can’t excuse her piece, which is simply gloating and reprehensible Schadenfreude: 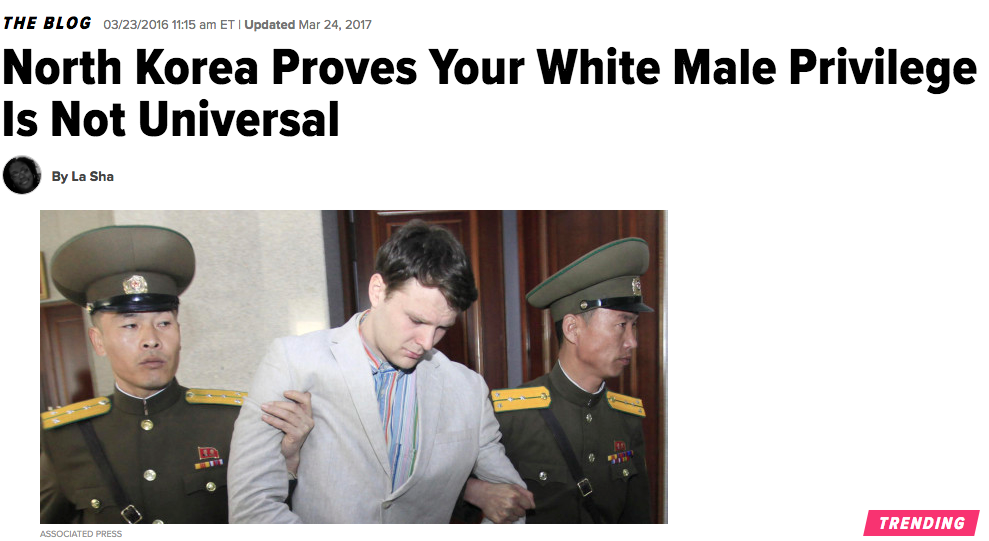 After Sha describes her mother’s happiness when 18-year-old American Michael Fay was caned in Singapore (not hard, and not a dreadful punishment), she says she’s just as happy as was her mom. Why? Because Wamblier got what he deserved for being white and assuming his pigmentation gave him license to steal from the Koreans of Color. And of course it’s all due to American racism. Have a gander at this:

. . . and now, my mother’s callous reaction to Micahel Fay’s sentence is my reaction to another young white man who went to an Asian country and violated their laws, and learned that the shield his cis white male identity provides here in America is not teflon abroad.

As shocked as I am by the sentence handed down to Warmbier, I am even more shocked that a grown man, an American citizen, would not only voluntarily enter North Korea but also commit what’s been described a “college-style prank.” That kind of reckless gall is an unfortunate side effect of being socialized first as a white boy, and then as a white man in this country. Every economic, academic, legal and social system in this country has for more than three centuries functioned with the implicit purpose of ensuring that white men are the primary benefactors of all privilege. The kind of arrogance bred by that kind of conditioning is pathogenic, causing its host to develop a subconscious yet no less obnoxious perception that the rules do not apply to him, or at least that their application is negotiable.

. . . Yeah, I’m willing to bet my last dollar that he was aware of the political climate in that country, but privilege is a hell of a drug. The high of privilege told him that North Korea’s history of making examples out of American citizens who dare challenge their rigid legal system in any way was no match for his alabaster American privilege.

No, I think that Warmbier just wanted a cool souvenir. Can anyone not poisoned by their own toxic racism think that his “alabaster American privilege” even went through his mind when he took down a poster? After all, it was only a poster, and yes, it was illegal, but he got fifteen years of hard labor and now will probably die. Even given that Sha was ignorant of Warmbier’s illness, she has no excuse for celebrating the guy’s brutal incarceration. But it’s okay because, after all,  he is white.

Sha is even callous about his parents’ desperate attempt to get him released. One feels that she is even happy that it didn’t succeed, for, after all, Warmbier is white:

And while I don’t blame his parents for pressuring the State Department to negotiate his release, I wonder where they were when their son was planning a trip to the DPRK. Didn’t they impress upon him the hostile climate that awaited him? Didn’t they rear him to respect law and order? Did they not teach him the importance of obeying authority?

What a mind-blowing moment it must be to realize after 21 years of being pedestaled by the world simply because your DNA coding produced the favorable phenotype that such favor is not absolute. What a bummer to realize that even the State Department with all its influence and power cannot assure your pardon. What a wake-up call it is to realize that your tears are met with indifference.

How nice of her not to “blame his parents” to try to get him freed! In the end, Sha reveals her real motivation: she is black and oppressed, and in fact is just as oppressed in America as Warmbier was in a North Korean prison. (Seriously?) This article is not about Warmbier at all; it is about Sha’s perceived oppression and how people should pay attention to her plight. Me! Me! Me!  After all, Sha’s at least as bad off as Warmbier!

Here we have the Oppression Olympics stated about as baldly and callously as one can:

As I’ve said, living 15 years performing manual labor in North Korea is unimaginable, but so is going to a place I know I’m unwelcome and violating their laws. I’m a black woman though. The hopeless fear Warmbier is now experiencing is my daily reality living in a country where white men like him are willfully oblivious to my suffering even as they are complicit in maintaining the power structures which ensure their supremacy at my expense. He is now an outsider at the mercy of a government unfazed by his cries for help. I get it.

No, she doesn’t get it, and I doubt she would have traded places with Warmbier in a North Korean camp. How dare she laugh at what happened to him?

One gets the feeling, too, that there is nothing that could have happened to Warmbier that she could not use as an excuse to fulminate about his whiteness and privilege, and no punishment so draconian that she wouldn’t have laughed at it. In fact, Warmbier’s plight has nothing to do with his skin color (witness the Korean-Americans who have also been arrested and detained), and everything to do with Sha’s need to flaunt her oppression.  If she has been the victim of bigots, that’s bad, and I feel sorry for her, but the true heros of racial justice, like Nelson Mandela and Martin Luther King, would never glory in what happened to Warmbier. In fact, there’s no indication at all that he was a racist. He was simply white.

Even by HuffPo standards, this article is execrable, and Sha is a horrible human being. And, of course, comments on her piece are not allowed. Why did they publish it?