The Gasht-e-Ershad, or Iranian “morality police”, have wide latitude to arrest women for inappropriate dress or behavior (covering themselves insufficiently, showing too much hair, being with a boyfriend on the street, and so on). As The Observers France 24 reported in May, a lot of women get arrested:

Part of the regular police force, its male and female officers are charged with enforcing Islamic codes in Iranian society, and have the power to arrest people they think are violating them. While the total number of its officers is unknown, a spokesman said the force made 207,000 arrests between March 2013 and March 2014, and notified a total of 2 million women that their hijab (Islamic dress) was not correct.

Under Iran’s Islamic law, women are supposed to cover everything except their face and hands. Conservative women wear the chador – a black garment that covers the head and goes down to the ankles. But other women choose to wear a scarf that covers their hair, a knee-length “manteau”, or coat, with sleeves to the wrist, and a skirt or trousers.

In recent weeks, a series of videos has emerged on social media showing what happens when women are arrested by the morality police. Many of the videos – filmed surreptitiously inside the patrols’ white and green vans, and inside police stations where women are questioned – have been posted to a Facebook page called “My Stealthy Freedom”. [See also here.]

The Observers link gives some disturbing cellphone videos taken surreptitiously by brave and “uppity” women in custody, in vans, and in the police station.  One woman who was apprehended said this:

The problem is we’re never sure what’s forbidden and what’s not. Women are arrested because their sleeves are too short, or their manteaux are a bright colour like red or yellow. Or they’re wearing torn jeans, or a hat instead of a scarf or chador. Or they dye their hair a colour like blue or pink. Or they have a tattoo. Or long boots. Or heavy makeup. Or leggings.

The arrest is not going to change the way I dress. But one thing has changed: I don’t feel safe in the streets anymore, because of the patrols. I feel suffocated. How can I be arrested in my own country, humiliated and treated like a criminal when I’ve done nothing wrong? Just because they don’t like the way I look. The next time it happens, I’ll resist – I won’t get in the van even if they beat me up.

Click on the screenshot below to go to a brief history of covering in Iran, which began by order of the government after the revolution in 1979. Not many women covered their hair then, and there were huge demonstrations by women against it. So much for it being a “choice” in Iran—it’s not only the law, but the evidence is that without that law and the attendant social coercion, most women wouldn’t cover themselves. A few brave women defy that law, and are also shown in the video below.

A BBC report shows more arrests in a distressing video; click on the screenshot to go there: 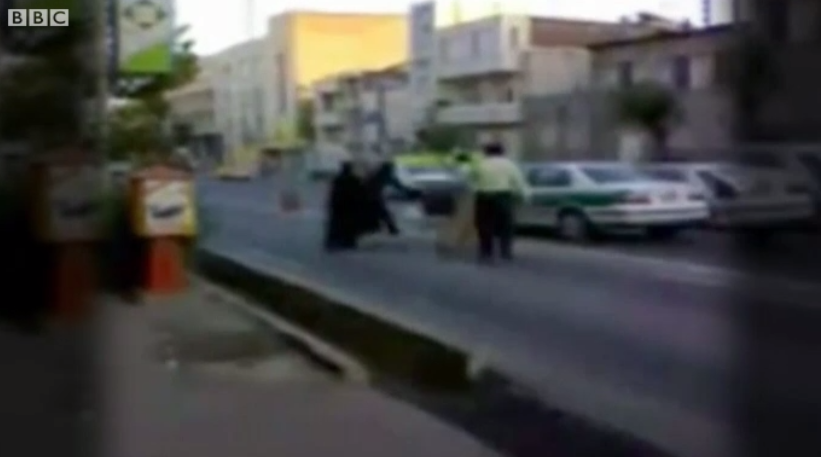 Make no mistake about it: this is not a natural aspect of Iranian “traditional culture”, as some apologists claim. If that were the case, why did the “culture” change all of a sudden in 1979, just when Iran became a theocracy? Nor can it be explained by Western “colonialism”, as it is clearly involuntary and was imposed on women by men adhering to Islamic doctrine.  No, this is the “culture of religion” pure and simple, and not primarily culture, as Anita Sarkeesian maintains in her new Islam-apologist video on the site “Feminist Frequency”. The clip below is starts at 14:50 in that video, and I’ve transcribed the relevant bit (my emphasis):

“Now I can already hear the army of Richard-Dawkins-parroting, anti-feminist Twitter users typing up their responses about how Islam is a religion dedicated to oppressing women. It’s amazing how suddenly everyone’s a feminist when it lets them perpetuate hate against brown people [JAC: n.b.—Not all Muslims are “brown”] or dismiss concerns about how women are oppressed in their own culture. So let’s be clear: misogyny is not a problem with Islam; misogyny is a problem that some cultures which happen to be Muslim use the religion to perpetuate and justify. Christianity has been used a tool that has been used to oppress women around the world for millennia.”

This is how an ideologically blinkered feminist explains things like the Islamic morality police, the stoning and the covering of women, and so on. It’s the culture, Jake! Remarkable, isn’t it, that the culture happens to be coincident in both space and time (see above) with the imposition of Islamic theocracy? And we all know why people like Sarkeesian keep making these unconvincing arguments: they don’t want to be seen as racists who oppress “brown people”.