An article in yesterday’s New York Times, “Trump inherits a secret cyberwar against North Korean missiles“, details not only the U.S.’s largely futile efforts to use hacking and antimissile defenses to derail or neutralize North Korea’s missile drive, but also the remarkable progress that that most repressive of all countries had made in missile production. I’m not sure how they did it. Despite sanctions, embargos, and so on, North Korea is poised to be able to deliver its warheads long distances, as shown in the second plot below.

North Korea being where it is, and being so small, I’m not sure what the DPRK’s monomania about missiles is all about. The only explanation, besides national pride, is to stave off a preemptive strike on their country. Perhaps, in their paranoia, they think they won’t be invaded if the invaders (read: U.S. and South Korea) know the devastation that would ensue to their own countries (right now only South Korea) . (The North Koreans would, however, need ample advance warning to have time to launch their own arsenal when they detect incoming missiles.) As for the world worrying about North Korea making its own preemptive strike, well, the DPRK would have to be suicidal, as the entire country would be immediately wiped out. But even preventing a preemptive strike is good for them, for it assures them that nobody is going to take the initiative to go after the world’s most odious regime. (And that would also ensure the deaths of millions of innocent North Koreans.) Nope, targeted assassination would be a better strategy if you’re really trying to destroy Kim Jong-un’s regime.

Here’s North Korea’s missile arsenal; note that the last two, the KN-8 and KN-14 (which haven’t been tested), have a potential range that includes the U.S. When North Korea manages to put a nuclear warhead on an intercontinental ballistic missile, then we’ll be in trouble. And that seems only a matter of time. 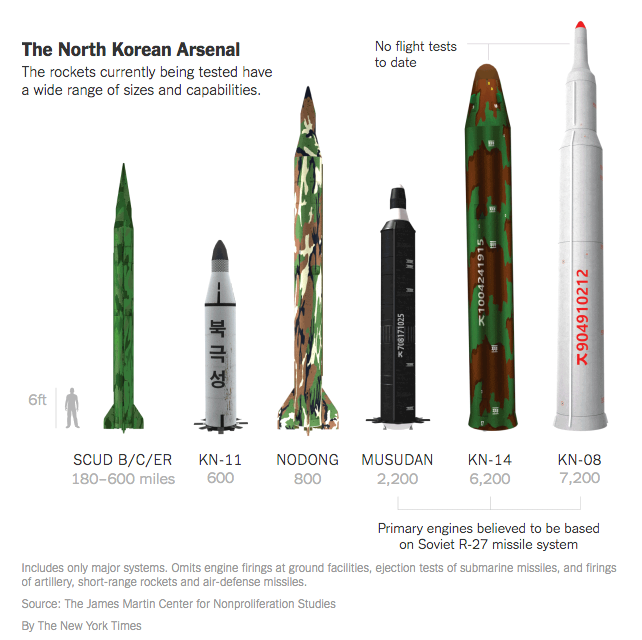 An examination of the Pentagon’s disruption effort, based on interviews with officials of the Obama and Trump administrations as well as a review of extensive but obscure public records, found that the United States still does not have the ability to effectively counter the North Korean nuclear and missile programs. Those threats are far more resilient than many experts thought, The New York Times’s reporting found, and pose such a danger that Mr. Obama, as he left office, warned President Trump they were likely to be the most urgent problem he would confront.

And here’s the estimated ranges of those rockets. They already have delivery capability to devastate Japan once they put a nuclear warhead on a NODONG or a KN-11.

I hope I live to see the day that North and South Korea are united in the same way as East and West Germany. I don’t think I will, and I weep for the North Korean people who, brainwashed from birth, truly believe that their country is a worker’s paradise beleaguered by America. Bit by bit, as foreign media infiltrates into North Korea, they’re learning. But the regime is as brutal as ever, and I despair of any progress.