Squirrels get a bad rap in many places, but I won’t stand for them being dissed here, especially because I take care of the local ones. And, like all animals, when you see them regularly and close up, you learn a lot of cool biology.

In case you didn’t know, squirrels do build nests to protect their babies and to stay warm in winter; you may have seen them in the form of big balls of leaves up in the trees, which are more visible in winter. While some squirrels use treeholes, the construction of a leaf nest is quite intricate:

Leaf nests are constructed from various twigs, leaves, moss and other material. To start, twigs are loosely woven together to make up the floor of the nest. Next, squirrels create more stability by packing damp leaves and moss on top of the twig platform to reinforce the structure. Then a spherical frame is woven around the base, which creates the outer shell. The final touches include stuffing in leaves, moss, twigs and sometimes even paper to build up the outer shell of the new home.

The inner cavity of its leaf nest is about six to eight inches in diameter and lined with more material, usually shredded bark, grass and leaves. However, some squirrel species, including Gray Squirrels, can have nests that are much larger. Some nest cavities can span 2 feet wide! 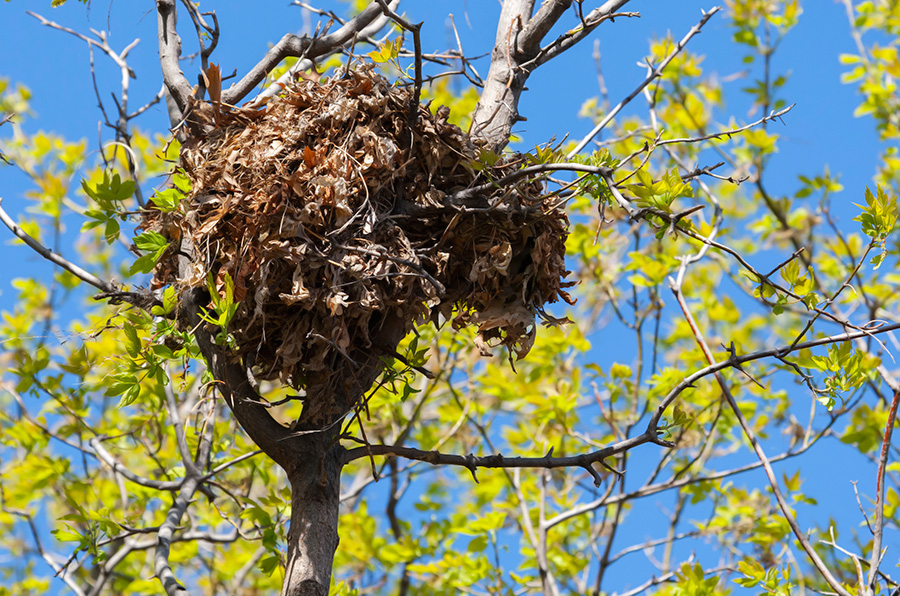 Cross-section (I hope no squirrels were harmed in the making of this photo): 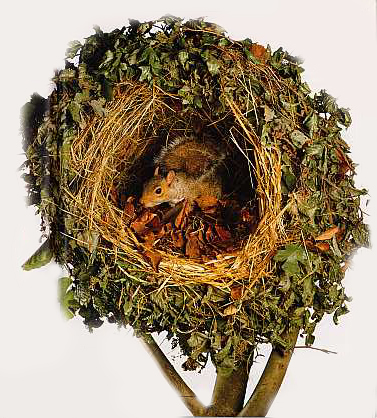 A few days ago the New York Times had a piece on nest construction; click to go to the article. I’ve put an excerpt below:

The squirrel begins by roughly weaving a platform of live green twigs. On top of this, soft, compressible materials like moss and damp leaves are added. Then an outer skeleton of twigs and vines is built around the insulated core, and finally, additional material fills in and strengthens the shell.

For the familiar gray squirrel, Sciurus carolinensis, the central cavity is about six to eight inches across. Smaller species build proportionally smaller nests.

A 2013 German hidden-camera study of a red squirrel filmed a nest being built in work periods totaling more than three and a half hours over three days. The squirrel carried material to the site with its mouth and front paws; bent stiffer twigs with its head and face; pushed other material into place with its legs; shredded lining components by holding them with the front paws and chewing; and shaped the inner cavity by lying in it and turning around.

These people got a ringside seat as a squirrel built its nest on a windowsill. Note the intricate weaving of twigs:

36 thoughts on “How squirrels make their nests”