I was saddened to hear about the violence in D.C. this weekend, with over 100 people arrested and substantial damage to property.  If a march is to succeed, it should be nonviolent, as was the case with the civil rights and Vietnam marches in the Sixties (yes, I know there was some violence).  If the Left is to keep the moral high ground, we simply can’t go around physically attacking those whose views we don’t like. In fact it’s ironic, because when progressives do this, they’re implicitly denying someone a REAL safe space: a space to be free to express your opinions and remain physically safe. “Safety” refers to freedom from physical attack or illegal harassment, not to freedom from hearing views you don’t like.

As a conscientious objector, I’ve always adhered to the nonviolent philosophies of Martin Luther King and Mahatma Gandhi, for if you start violence, you lose credibility.

Here’s a white supremacist, Richard Spencer, getting punched in D.C. during the anti-Trump rallies:

Spencer is odious, but he doesn’t deserve to be punched. And yet here’s atheist Dan Arel, whose behavior has become increasingly bizarre, defending that punch on Twitter:

And a few other unhinged tweets by Arel:

I guess Arel thinks that gives us license to punch anyone we don’t like. I no longer have any use for Arel, even though at one time he wrote a good book on godless parenting.

More excuses for violence; this one is particularly pernicious:

Dave Rubin chimes in with a tw**t by CNN correspondent Jake Tapper, probably referring to Rosie O’Donnell’s claim that Barron Trump was autistic (no evidence for that, I think):

That it even need be said is ridiculous, but mocking the 10-year-old child of a politician you loathe is odious, immoral, & self-defeating

Jake this is the Left in 2017. They can go after kids, punch people and destroy property because they're moral and everyone else is racist. https://t.co/YjV1zDdVgu

One more from Rubin:

Ok, enough screen time for me today. Remember, we're all still Americans. Unless someone thinks differently, then they're literally Hitler. 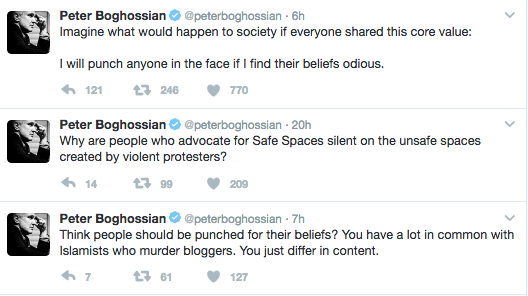 And Sarah Silverman strikes back: 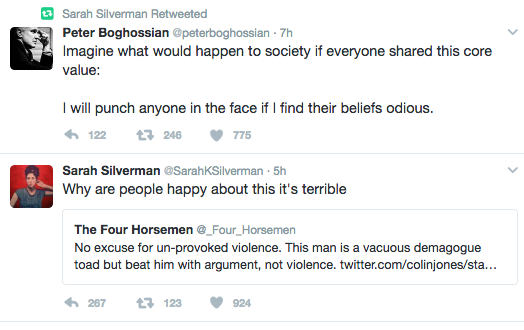 We were all worried about Trump supporters creating violence if Hillary Clinton won, but here we have exactly the opposite outcome.  Let’s knock off the violence, the punching, and the destruction, folks. It’s neither productive nor progressive. Even a white supremacist deserves to have his say without being physically attacked.

185 thoughts on “Welcome to the Regressive Left in the Trump era: no “safe spaces” for those you oppose”