You’re probably aware that tool use, once considered a uniquely human phenomenon, has now been documented widely in primates and birds. You may not know, though, that it’s also been seen in some insects, as in wasps that use pebbles to close off their burrows after laying eggs. Ants, too, have been seen to use debris from the environment to transport liquid food back to the nest; the ants that do this have a non-expandable crop, so they can’t simply suck up the stuff and then regurgitate it to their nestmates.

Now, in a new paper in Animal Behaviour by István Maák and his colleagues (link and free download below), we find that two species of the funnel ant Aphaenogaster not only use tools to suck up liquid food, but are selective in which tools they use. The authors collected colonies of A. senilis and A. subterranea, and presented the colonies in the lab with either straight honey or a mixture of honey and water placed in plastic plates on a piece of aluminum foil. The two species were treated differently: A. subterranea was given both foods (separately), while A. senilis was given only diluted honey (1 part honey to 3 parts water).

Each species was then presented with a variety of “tools” around the food with which they could use to soak it up or dip it (like a chip into guacamole) before taking it back to the next. The tools also differed between the two species. These diagrams of the experimental setup show what was given to both species. First, a specimen of A. senilis (a queen): 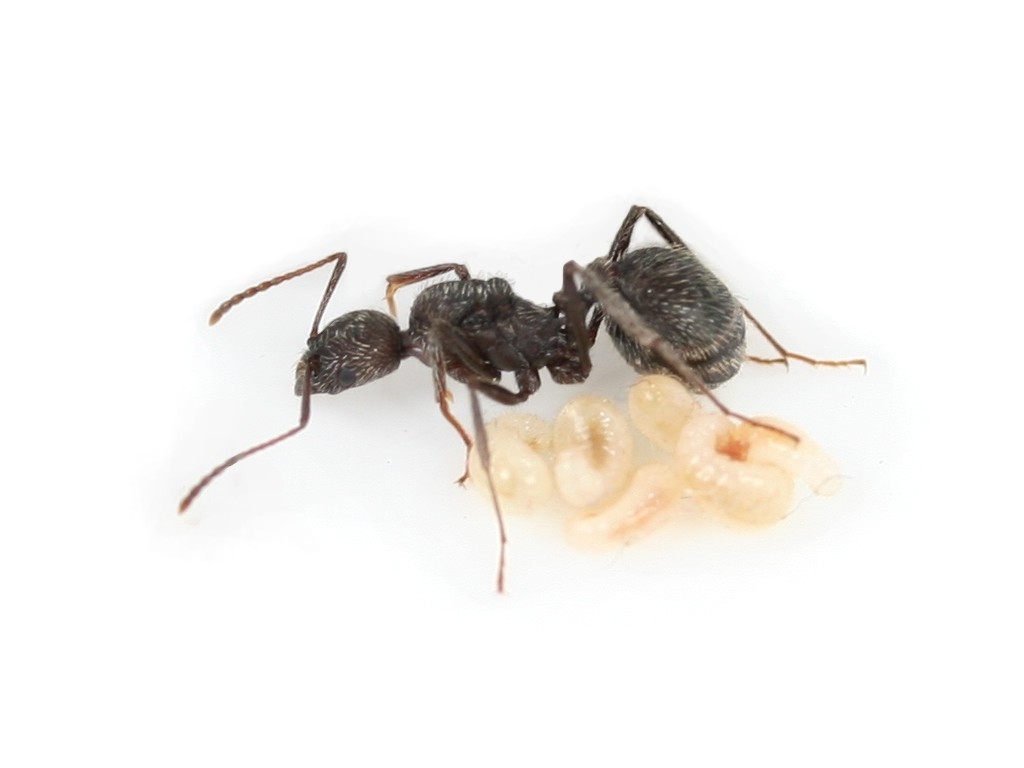 The experimental setup for A. subterranea: 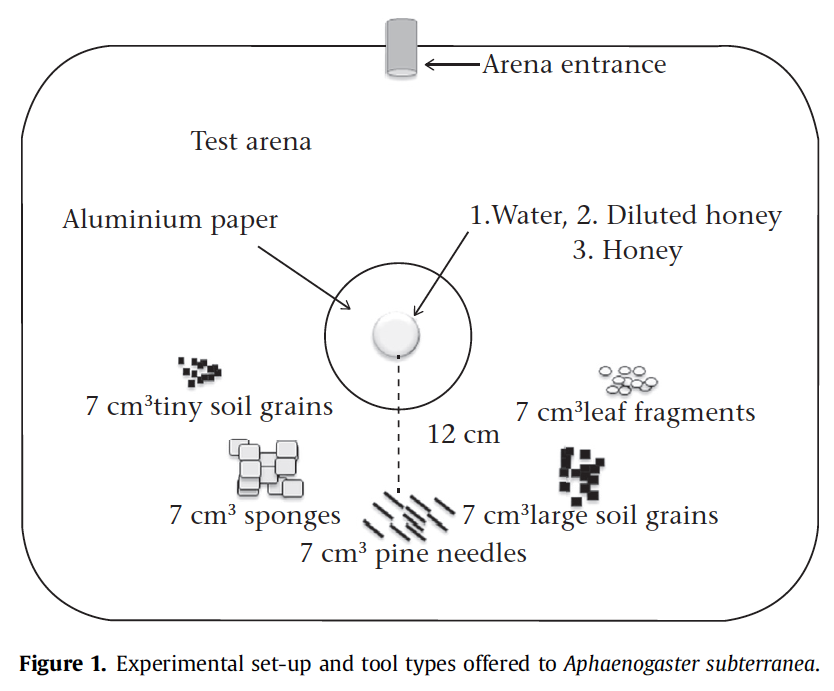 A photo of the setup from the paper and the time course of how the ants behaved: 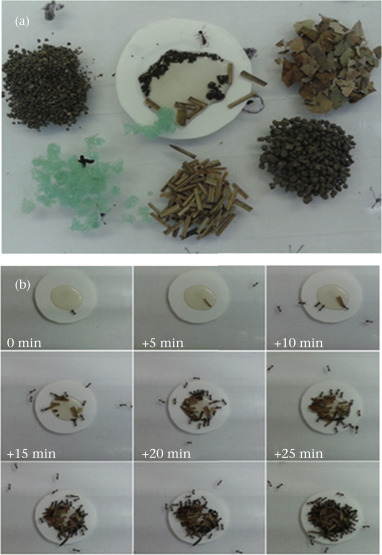 As you see, they were offered five items to use as “tools,” including sponges, which of course the ants had never encountered. These tools differed substantially in their ability to soak up or hold the two foodstuffs. As the table below shows, sponges were by far better at soaking up the honey/water solution, while leaf fragments (used like chips, I suppose), were by far the best for transporting straight honey. The expectation was that the ants would glom onto the substance that was best at soaking up the liquids, as that allows for more efficient transport (remember, ants are strong for their size).

Here, from a New Scientist blurb on the paper, is a photo of ants dropping tools into the food:

In this species the ants didn’t really prefer the best “tool”: soil grains were put into the honey-water, and pine needles for the honey despite their poor ability to soak the stuff up. For transporting food to the nest, this species used soil grains most frequently for honey-water, and sponges for honey, despite the observation that both of these are not so great for dipping into and soaking up the viscous honey. Conclusion: this species isn’t using the best possible “tool” to transport the food.

The setup for A. senilis was different: these anbts were offered only honey-water, and were given twigs, strings, parafilm (a waxy, stretchable substance used to cover stuff in the lab), bits of paper, and artificial foam (it’s not clear why there was a difference in setup): 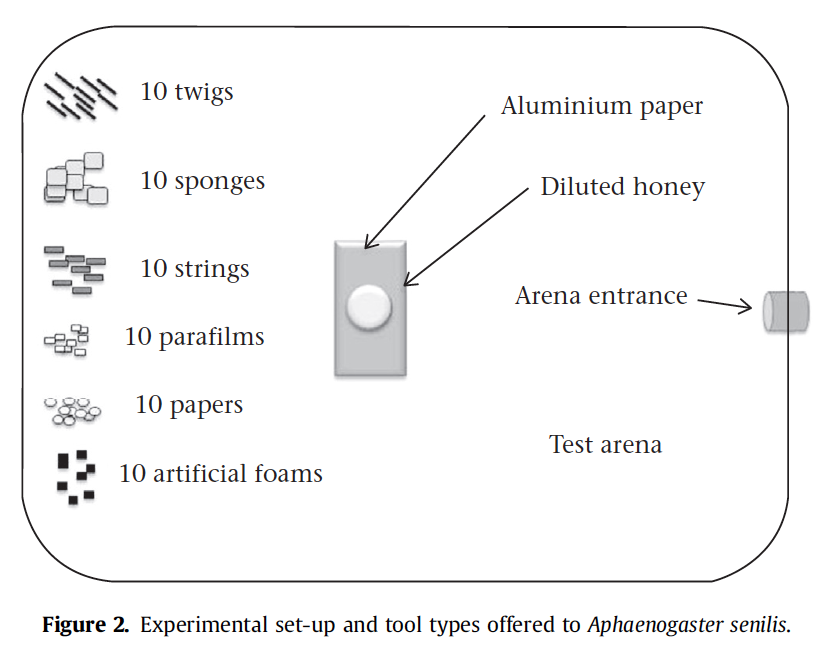 And the soaking properties. Sponges and paper were by far the best at sucking up the honey-water:

In this case, the workers did behave “optimally”, though it took some time for them to figure it out. Over the ten trials, they apparently learned to both put paper and sponges into the solution more frequently, and transported them to the nest more frequently.

In one of the two species tested, then, the ants chose the optimal tools, and their behavior wasn’t fixed; they apparently learned somehow which tools were best.

Why did A. subterranea use suboptimal tools? The author suggest that there may have been problems handling some of the tools, as well as a lack of familiarity with things like sponges and paper, which aren’t present in the natural environment. But that doesn’t really explain why one species used the right tools and the other didn’t.

The main lesson of the paper, though, is that ants do use tools (we already knew that from other studies), that they can recognize foreign objects as tools, that at least one species can learn to select those tools that allow it to transport food back to the next more efficiently.

The only remaining consideration is this: are the ants really using tools? The authors say, yes when using the definition given below, and I agree. If chimps chewing leaves to make sponges for soaking up water our of crevasses counts as tool use, then so does this. And, in reality, the strict definition doesn’t matter: what is important is a tiny-brained animal can figure out how to solve problems by using bits of the environment. (References omitted in quote below, emphasis mine).

. . . we think that the behaviour of the ants meets one of the most important criteria that define tool use in foraging contexts, i.e. the use of an external object to affect the position or location of another object or substance. Obviously one could argue that nest-building materials affect the position of other nesting materials, which is why some authors object to the idea of tool use and would perhaps like to see either a more restricted use of the term or its complete abandonment for a wider term such as construction behaviour. Although we understand this position and the reasons for it, given the above considerations, we still prefer to refer to the behaviour of the ants as tool use, or the similar denomination of object use.

49 thoughts on “Selective tool use in ants”