I’m sorry to keep hearing about how my alma mater (for my Ph.D.), Harvard, is becoming more and more Regressive Left (I’m tired of using that word, so if readers have another, let me know.) They created social justice placemats, the President threatened to punish students on campus if they belonged to single-sex “finals clubs” off campus, and now we have the obligatory celebration of the hijab—and Islam as feminism—in a post at the Harvard Gazette, “Islamic studies scholar addresses myths and mores behind the veil.”

The scholar was Celene Ibrahim, an Islamic Studies Scholar-in-Residence and Co-Director of the Center for Inter-Religious and Communal Leadership Education at Hebrew College and Andover Newton Theological School, as well as a Ph.D. candidate in Near Eastern and Judaic studies at Brandeis University. Her talk was at Harvard’s “Faculty of Arts and Sciences Diversity Dialogues”, and her purpose was to address and dispel stereotypes about Islam.  The problem is that she whitewashed Islam, much as Karen Armstrong and Reza Aslan do. She told the crowd what they wanted to hear. Here are some of the things she said:

Ibrahim cited a 2011 Pew Research Center study that found “a median of 58 percent [of respondents] across four Western European countries, the U.S., and Russia, called Muslims ‘fanatical.’” She said the media shapes much of the American perception of Muslims as angry and oppressive.

Ibrahim acknowledged that while Muslim women are oppressed in some countries [JAC: that’s about all she said about that], Islamic theology is highly woman-affirming. “Muslim feminists often struggle … to reform misogynistic ideas, customs, and/or legal codes that don’t reflect the teaching of the Prophet Muhammad,” she said.

Well, I’ll decry those who call Muslims “fanatical” (though extremists ones are), but as for “women-affirming” theology, I’m not so sure about it. On what grounds are Muslim women “oppressed” in some countries? It’s the religious doctrine, stupid!. The Qur’an and hadith aren’t women-affirming, and, at any rate, whatever Muslim theology is now, it’s hardly pro-feminist. Even in Britain and the U.S., some Muslims are forced to wear the hijab by their families or peers, and of course there are all those Muslim-majority countries that hold attitudes like those shown below (taken from Pew’s “The World’s Muslims” study in 2013. First we get the percentage of people in Muslim-majority countries who favor making sharia the law of the land (Saudi Arabia, Yemen, and Iran were not surveyed!):

Then, among those who favor sharia as the law of the land, here are the data on women’s rights: 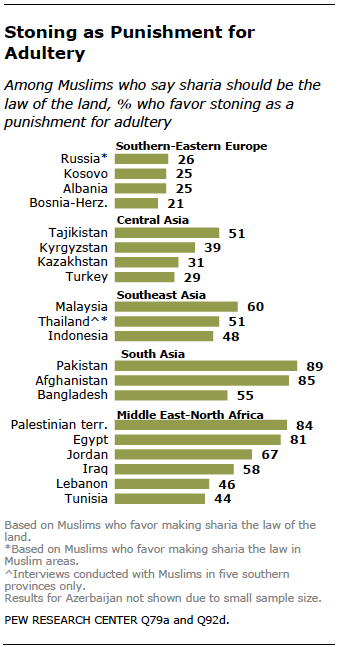 And here’s the kicker: when you see the plot below, remember that Saudi Arabia, Iran and Yemen were NOT surveyed, and those nations would surely fall in the “middle Eastern” group. If these people are inspired by a “highly woman-affirming philosophy”, somehow they’ve got it badly wrong!

I can’t help but see Ibrahim as a “useful idiot” for Regressives, by which I don’t mean she’s an idiot, but that she’s blinkered and primed to say exactly what liberals want to hear. What they want to hear is something to resolve their cognitive dissonance over a people supposedly both “brown” and “oppressed” (traditionally a repository of liberal sentiments) being at the same time in the thrall of a theology/ideology that is misogynistic, homophobic, oppressive, and barbaric. How do you resolve this? You trot out Muslims like Ibrahim, who will assure you that Islam is grossly misunderstood. And the Harvard Liberals, eager to hear this stuff, will buy palpably false statements like this:

In addition, [Ibrahim] said, in places like America, much of what Muslim women do is a matter of choice. “There is great diversity in the Muslim community,” she said. While some Westerners may assume that Muslim women who wear clothing that covers everything but their eyes, pray in gender-segregated spaces, or attend women-only athletic facilities are being forced into an unwanted modesty, “There are some spaces where gender segregation is appropriate,” Ibrahim said.

In places like America, where only a few percent of the population is Muslim! What about places like Saudi Arabia, Iran and Iraq and Afghanistan and Egypt, and now, increasingly, Turkey? How much choice do those women have? And is a Muslim girl in America forced to wear a hijab at age six in a faith school (also in the UK) really exercising “choice”? Has Ibrahim thought about that? And where, exactly, are the spaces where gender segregation is appropriate? In mosques, many of which are so segregated in the US? Please tell us, Ms. Ibrahim! (Maybe she just means restrooms.)

And, of course, Ibrahim extols the hijab—meant to symbolize modesty and to protect women from arousing the hormones of males, who will be driven into an uncontrollable sexual frenzy, like spawning salmon, at the sight of a woman’s hair:

Ibrahim talked at length about the symbolic, religious, and practical purposes of the hijab, the headscarf worn by many, but not all, Muslim women. The headscarf is a symbol that has a certain power, she said.

“Wearing the headscarf is a matter of feminism, aesthetics, and solidarity for me,” she wrote in a New York Times op-ed piece earlier this year. “The hijab is fun and dignifying … it’s part of my morning routine.”

Feminism? The very garment symbolizes men’s control of women’s sexuality! Aesthetics? What is that about? And solidarity with whom?  It’s like wearing a ball and chain on your head—one put there by men.

But of course the useful idiot was useful: the Harvard folks, eager to hear that Islam is really The Religion of Feminism, and is Grossly Misunderstood lapped it up Ibrahim’s spiel like a cat drinks cream:

Joshua Dunn, procurement administrator in the FAS Office of Administration and Finance, one of the more than 130 people who attended the dialogue at Radcliffe Institute’s Knafel Center, said Ibrahim “challenged me to think outside the box about what it must be like to a Muslim woman living in the U.S. … Certain customs might be a matter of perspective and we should not automatically view [them] as oppressive.”

“I thought she laid out a compelling vision of feminist ethics and the virtues of a pluralistic society that values all cultures and religious beliefs,” he said.

Dunn is clearly a man yearning for confirmation bias.  The “certain customs might be a matter of perspective” blather is exactly the kind of cultural relativism that the Left must avoid. For it says that although it looks as if women are oppressed in many Muslim countries on religious grounds, well, that’s just a “matter of perspective.” We can always hire someone like Ibrahim to come in and tell us that we’re wrong: Islam is really feminist.

125 thoughts on “Hijab hijinks at Harvard”